I love a scenic drive.

Sometimes I’m so focused on getting to my final destination that I forget to enjoy the journey. That’s why I adore a scenic drive, where the journey is the whole point. Crack the windows, turn on your favorite road trip songs, and soak up the open road. From winding mountain roads, to coastal highways, here are some of the nation’s best drives.

Tail of the Dragon in Deals Gap – North Carolina and Tennessee 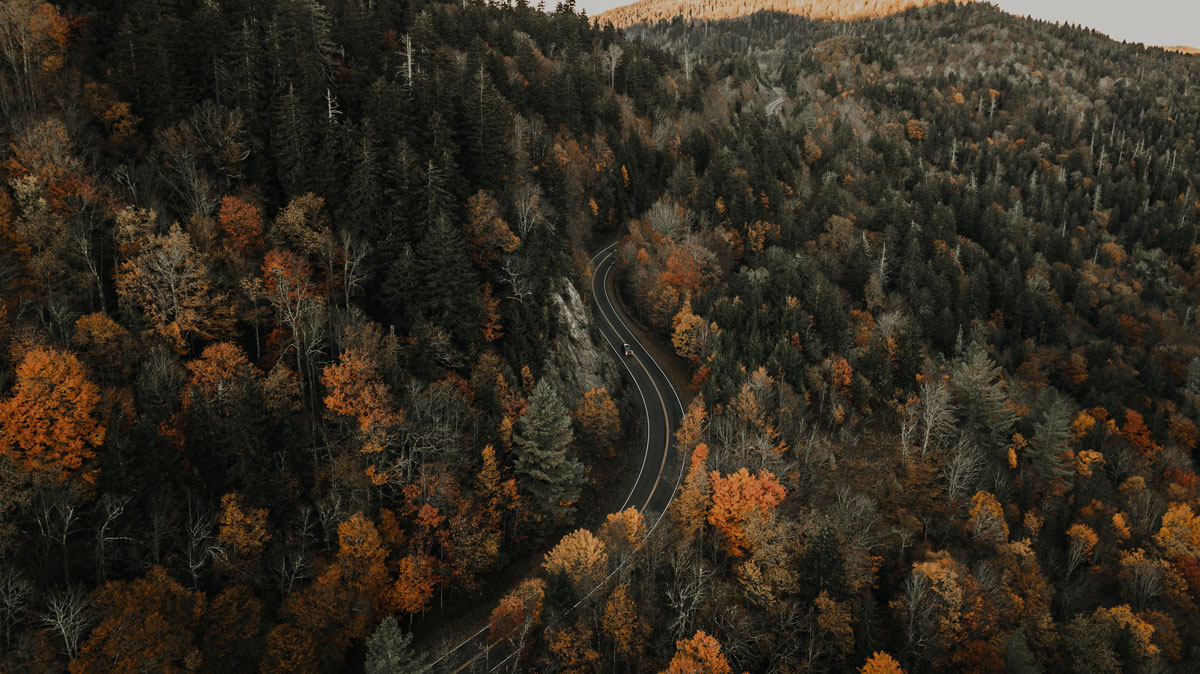 With 318 curves in 11 miles, I hope you packed your Dramamine! Designated US 129, this route is beloved by motorcyclists and sports car enthusiasts. The road abuts the Great Smoky Mountains (link) and the Cherokee National Forest, making for stunning views. An added bonus: there’s no intersecting roads or driveways to hamper your travel. Just take your time, because some of those turns are tight.

The drive takes about 30 minutes, but you’re only about 50 miles from the Blue Ridge Parkway, another epic American ride. It’s a great day trip if you’re visiting Asheville, or spending a weekend in Asheville, Knoxville or Chattanooga. 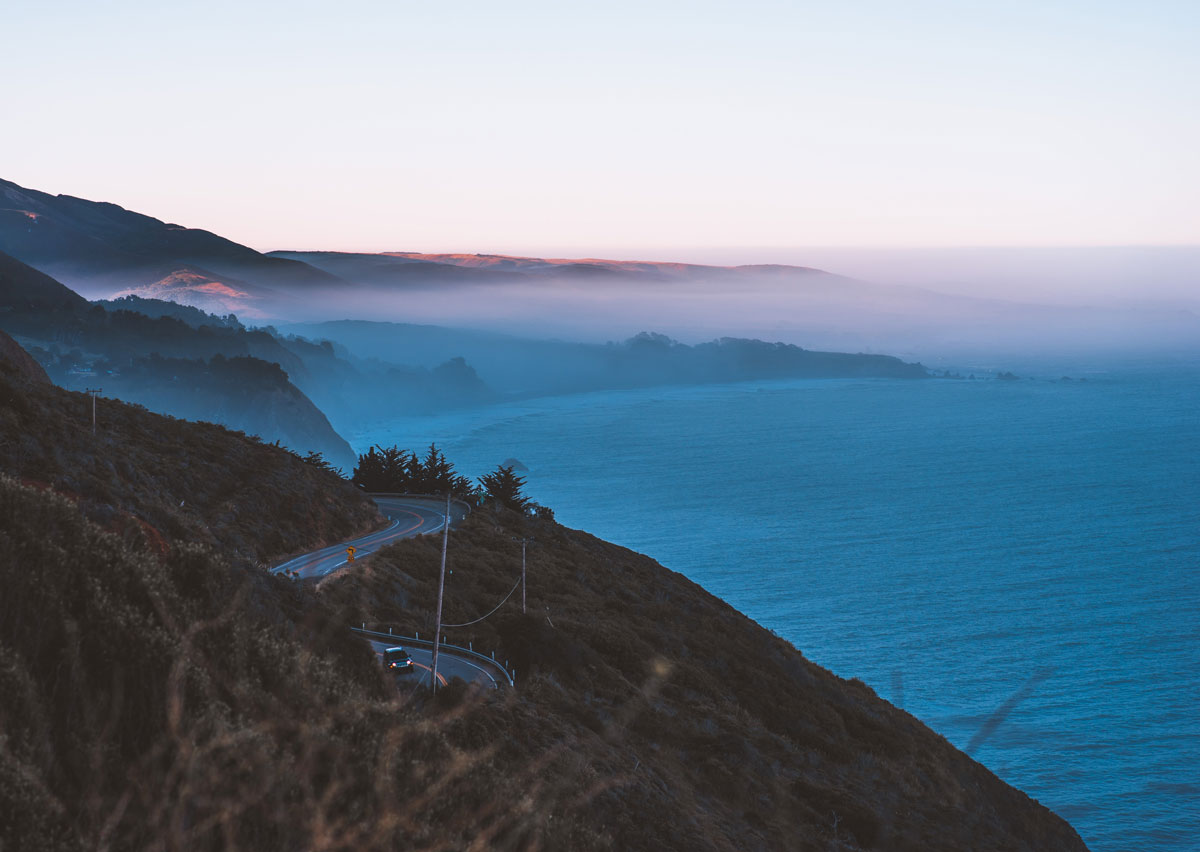 There’s nothing like road tripping the Pacific Coast Highway. Running 600 miles from San Juan Capistrano to north of the Bay Area, you could build a week-long vacation around this iconic drive. The best part? California’s enviable weather makes this drive possible year-round.

Going south to north, you can enjoy San Diego’s laid back beaches, then on to LA for a taste of Hollywood (why not cruise Mulholland Drive?). You’ll get serious surf movie vibes in Malibu. Be sure to check out the super casual and fun Neptune’s Net delicious seafood overlooking the beach. Santa Barbara is a must, as is Solvang, a delightful Danish town that’s the gateway to the Santa Ynez Wine Valley. Next, check out San Luis Obispo, famous for the Hearst Mansion, Bubblegum Alley and the Madonna Inn. Then, it’s my favorite part: the picturesque drive from Monterey to Big Sur. I filmed a whole episode of Places to Love here. Great food, epic views, incredible food and wine make this region the perfect crescendo. The trip ends in San Francisco, and what could make for a better grand finale than driving across the Golden Gate Bridge? 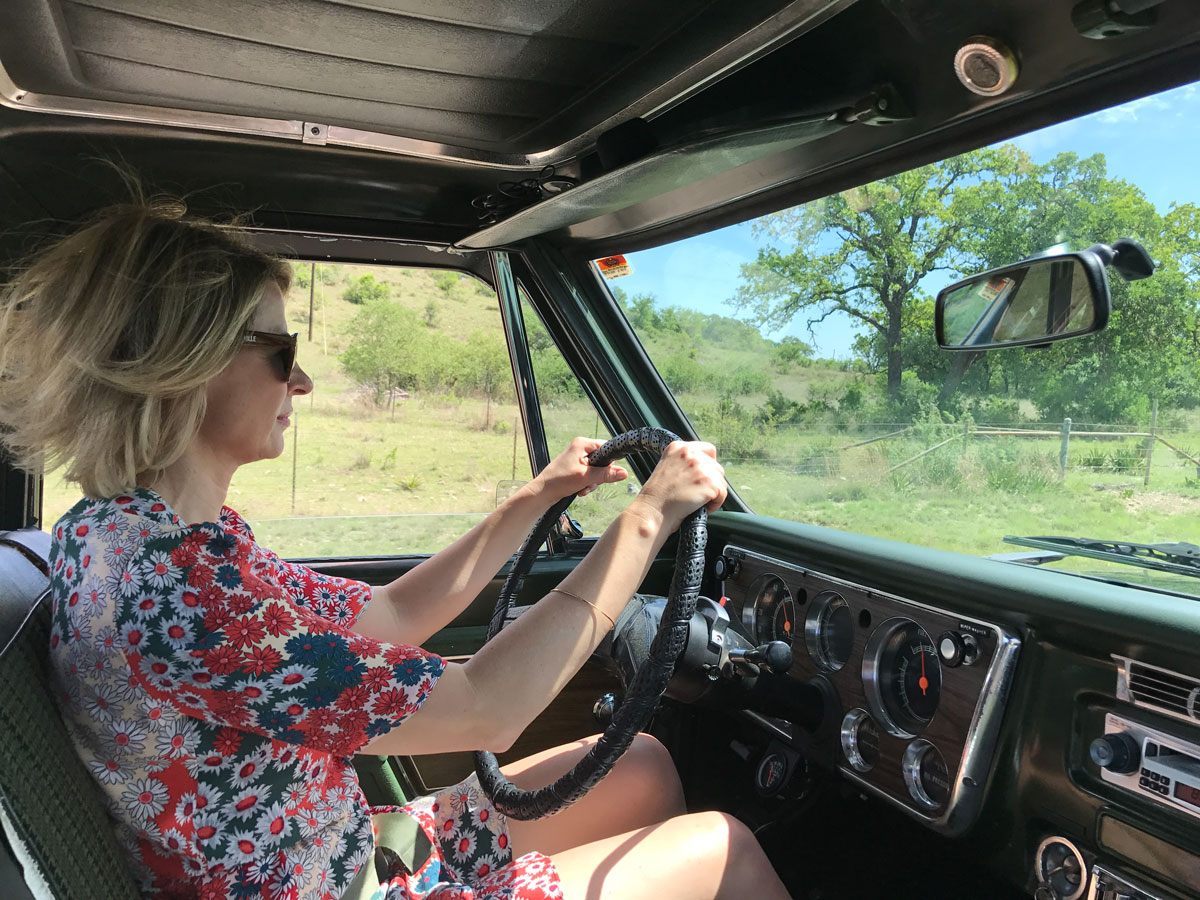 Three Hill Country Ranch Roads, 335, 336 and 337, are known throughout Texas as the Twisted Sisters. This 130-mile route takes you through the prettiest ranches hill country has to offer, taking about four hours to drive.

Kick off the drive in Medina, Texas—about 60 miles northeast of San Antonio. Hop on 337 heading west. It’s the longest and curviest sections of the route, and considered one of the most scenic drives in Texas. Just north of Vanderpool, you’ll find the Lone Star Motorcycle Museum—great for anyone into motorcycle culture. Continuing on, make a pit stop at the Bent Rim Grill in Leakey, Texas—a favorite spot for bikers, but I hear they’ll let minivan drivers like me order a burger and fries without too much trouble. You may want to gas up before continuing on as things start to get very rural up ahead.

Next up, you head north on Ranch Road 336. This is where the real “loop” beings, taking you over rolling hills, and lots of ranches, with stunning views at every twist and turn. It’s not unheard of to come across an actual Texas longhorn in the road. You might also encounter a whitetail deer, so long story short, drive with care.

At the end of RR336, head west on RT 41 until you see the signs for RR335. This section takes you back south through—wait for it—the rolling Texas Hill Country. You may want to take a break at Camp Wood, a teeny one stoplight town, before continuing back on the last leg of RR337, which eventually completes the loop in Leakey. A lot of drivers agree this section is best for last. It’s said that on just this last section of road, you’ll have changed direction over 130 times. I don’t know if that’s true, but I’m just going to take their word for it. 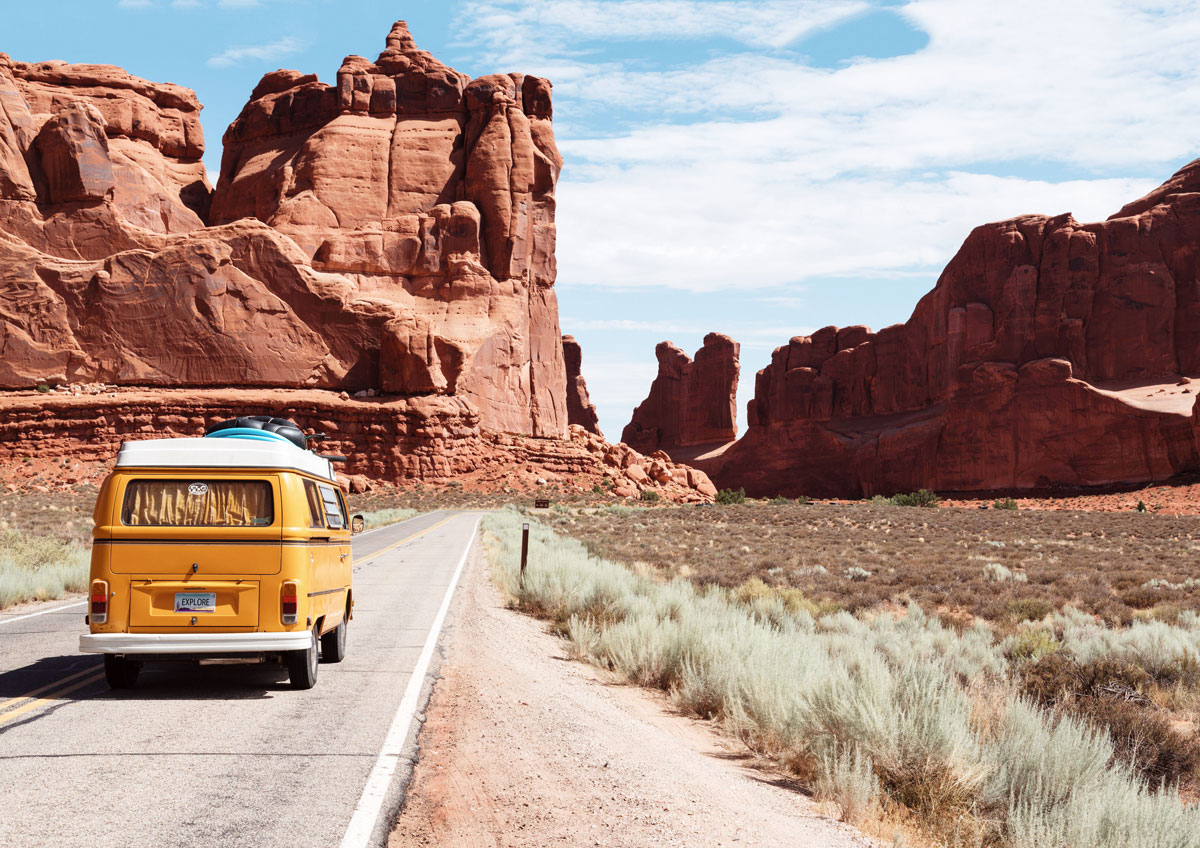 Jaw-dropping barely describes the beauty around every corning in Arches National Park, one of Utah’s Big Five parks. That said, there is a single road running through it and traffic can be bumper-to-bumper. If you want to leave the road rage back at home, I suggest doing this drive on a weekday (avoiding holidays) and first thing in the morning (before 8am) or after 3pm. If it were me, I’d go for sunrise to catch the first light hitting the gorgeous red rocks.

Plan at least three hours for this 40-ish mile drive (round trip), with stops at Delicate Arch, the Windows Section, and Wolfe Ranch. Parking lots fill up for those looking to hike, so get there early. Did I mention to get there early?

Arches is really worth the hassle, but since you’re already in the area, why not literally drive the roads less traveled? With three scenic byways in the area, there’s no shortage to choose from. Upper Colorado River Scenic Byway (U-128) runs along the Colorado River gorge, beginning at the Colorado River Bridge on the north end of Moab. You’ll soak up views of the surrounding red sandstone cliffs, Grandstaff Canyon, Castle and Professor Valleys (the setting for a John Wayne film or two—there’s even a free film museum at mile marker 14.) Next, it’s the dramatic view of Fisher Towers, back dropped by the snowcapped La Sal Mountains, and finally, ghost town of Cisco. The drive takes about two hours, depending how much you stop.

Dead Horse Point Mesa Scenic Byway (U-313) takes you through rugged red rock canyons, and into Dead Horse State Park (park fee required and worth it). There are many lovely views, but perhaps the most breathtaking is at Dead Horse Point—it’s one of the most photographed vistas in the world. The route will bring you all the way to Canyonlands National Park.

Potash-Lower Colorado River Scenic Byway (U-279) is the shortest of the bunch at 17 miles. But if you’re into history, like waaaaaaay back history, you don’t want to miss it. Along the route, there are stops to check out ancient petroglyphs AND dinosaur footprints. I know which drive my kids would want to take. 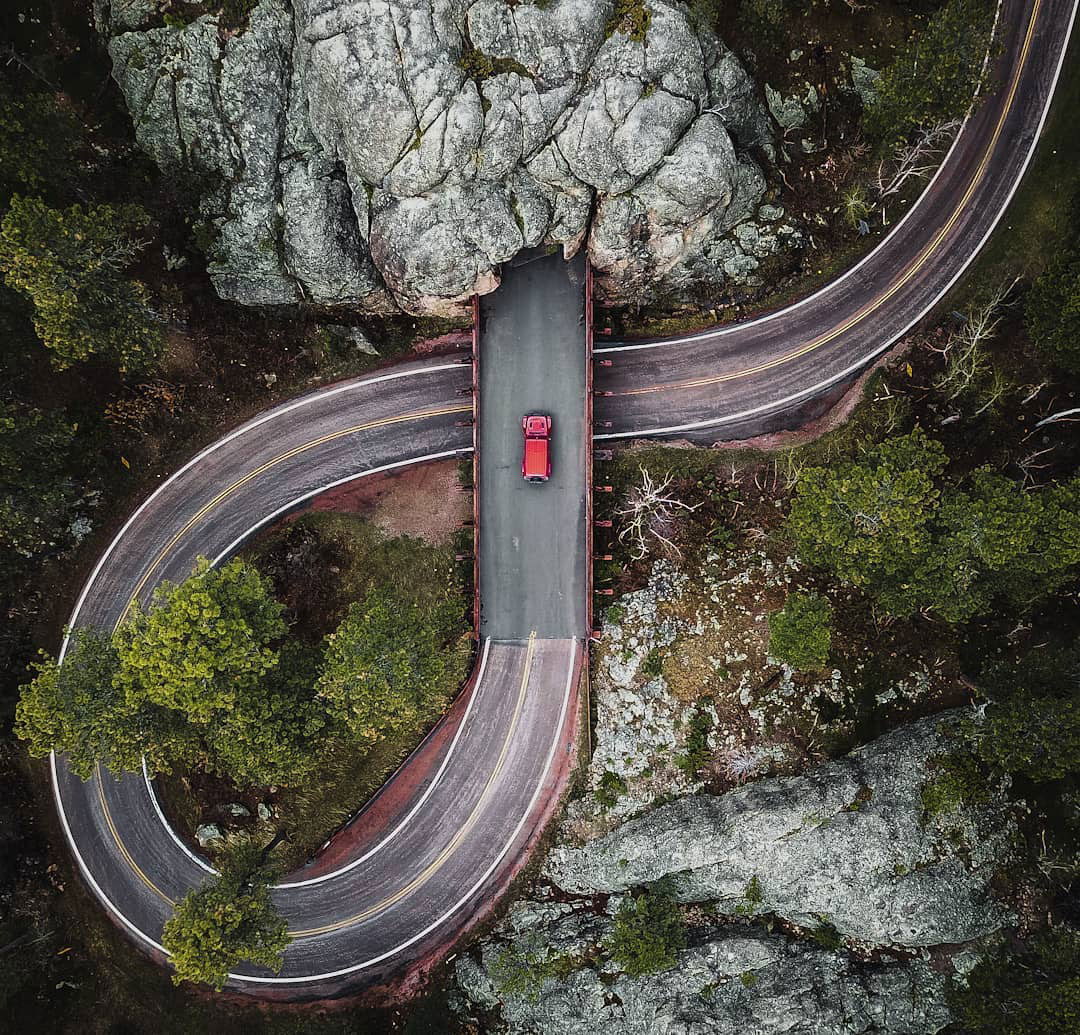 You don’t need to drive a Harley to enjoy this epic drive, but hundreds of thousands show up every August to partake in the annual Sturgis Rally. If biker-filled traffic jams aren’t your thing (and no judgement if they are!), go any other time from spring through fall (it’s closed in winter). This winding road takes you through 40 miles of granite “needles,” hence the name. The road, built in 1922, required workers to blast through sections of granite, creating tunnels just wide enough for a single car to pass at a time. So take your time, and pull over at designated spots for panoramic views of the Black Hills, Custer State Park, and—on a clear day—a perfectly framed view of Mount Rushmore through one of its tunnels. You’ll want to keep your eyes peeled throughout the entire region for big horn sheep, prong horn, white tail deer and bison, all of which call this area home. 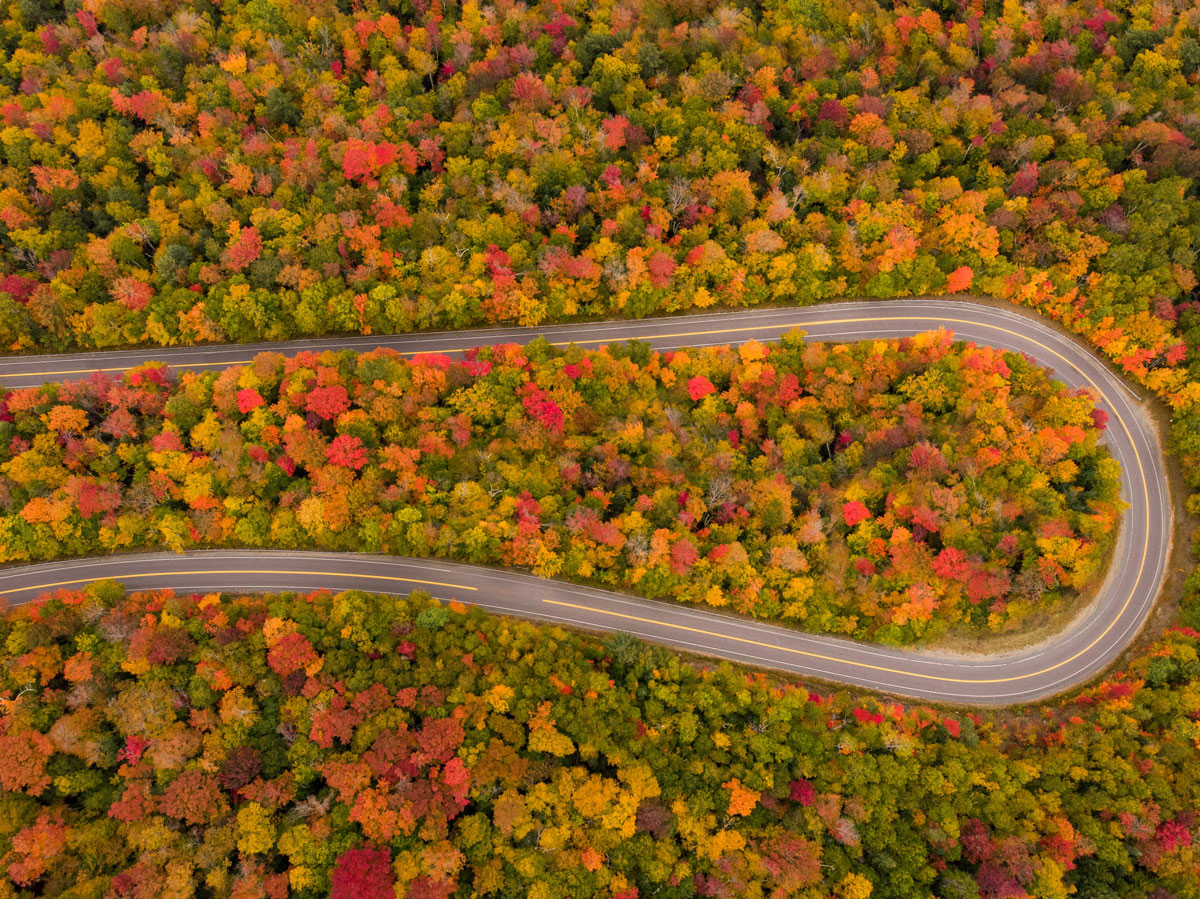 It’s my home state, and there are just so many wonderful drives to choose from. You could do the Coastal Byway, running from my hometown Portsmouth to Seabrook. Yes, we may only have 18 miles of shoreline in New Hampshire, but good things come in small packages. You’ll find charming towns and beaches along the way. The drive to Mount Washington is spectacular, though sometimes treacherous depending on weather. You’ll snake eight miles to the summit, and won’t even be out of breath at the top!

However, there is one drive that tops everyone’s list. Known fondly as “the Kanc,” the Kancamagus Scenic Byway traverses through 35 miles of the White Mountains National Forest. Starting in Lincoln driving toward Conway, you will find vistas of the Osceola Range, Pemigewasset Wilderness Area, and the Sugar Hill Overlook. Checking out the Albany Covered Bridge (built for $1,300 in 1858!) is a must, as is a short hike to Sabbaday Falls. Look for critters as your cruise, and know that it’s not unheard of to see a real live moose on your journey!

Other great drives to check out: 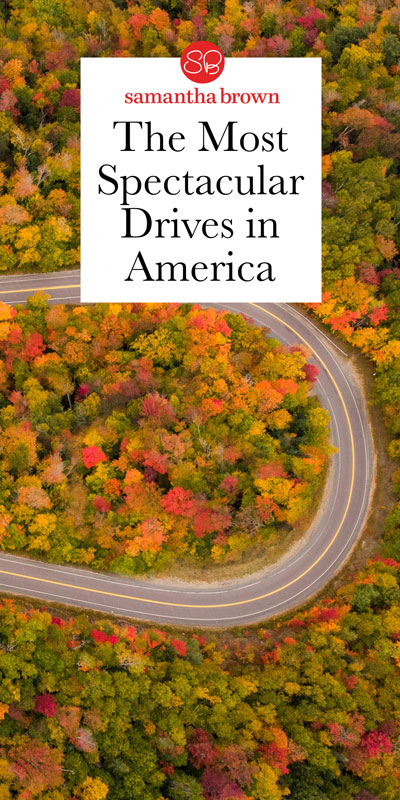 10 of the Most Beautiful Bridges in the World

Bridges unite countries, states and cultures and behold beauty that is both timeless and magnetic.…

6 of the World’s Most Magnificent Museums

When I travel, museums are one of those things I'm instantly attracted to. While I…

6 Volcanoes Worth Their Lava

What is it about volcanoes?  They are stunning, dangerous, worshiped, and feared.  When I travel,…