When it comes to food, LA has something for everyone. From fresh,organic cuisine and elegant sushi, to greasy burgers and incredible street tacos, you’ll undoubtedly find your kind of food in Los Angeles. Plus, the people-watching is always incredible: Hey… it’s that guy! From that show!

Here’s the Best Places to Eat in Los Angeles. 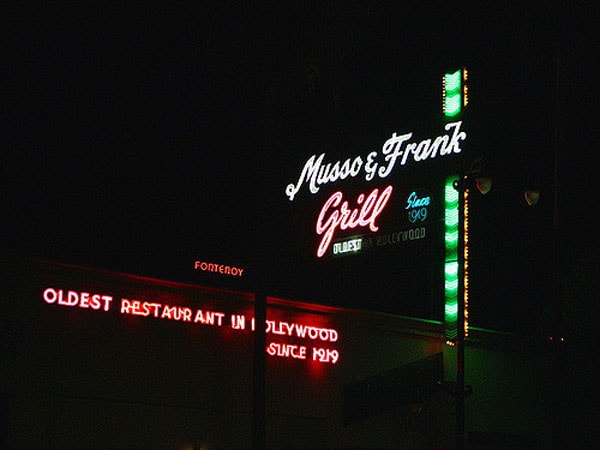 You’re in Hollywood—why not eat like it? There are few classic haunts frequented by the stars (or maybe their ghosts, as some of these places are really old!). For that red and white checkered tablecloth Italian experience, visit Dan Tana’s. Slip into one of their red leather booths and think about all the famous butts who’ve sat there before—including George Clooney, who the veal cutlet is named after.

Musso and Frank started serving steaks in 1919. Over the years, it became a regular haunt for studio execs, actors and prominent screenwriters. The staff is ancient, as is the décor, but in all the right ways. No surprises on this menu: shrimp cocktail, wedge salads, bone-in ribeyes, lobster thermidor—it’s a total blast form the past. I wouldn’t blame you for indulging in a three-martini lunch, this place practically begs it.

Wolfgang Puck’s flagship restaurant Spago still attracts celebs like a moth to a California-meets-Asian-cuisine fueled flame. You’d think a well-known place like this could—and would—rest on its laurels, but the food is as good as ever. I say go for lunch, leisurely enjoying your chili chicken salad, as you pretend not to use Google to figure out who’s sitting at the table next to you.

For cocktails, you have to hit up Bar Marmont. It’s dark and cozy, no matter the time of day. Order a Sunset Sour and soak up that old Hollywood vibe. 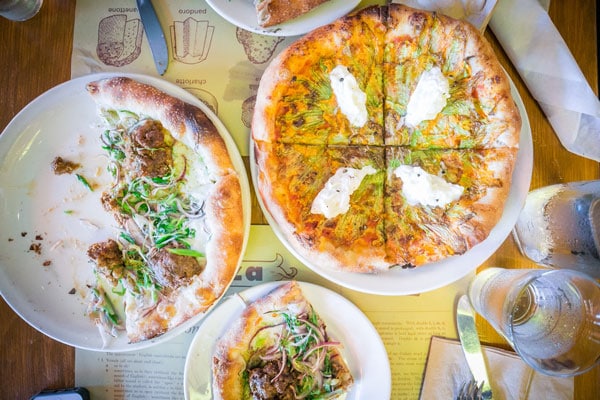 Or at least they pretend to. Famed baker Nancy Silverton teamed up with Mario Batali and Joe Bastianich to create one of the most beloved pizza shops in the country. Specializing in Neapolitan pies fired in a wood-burning oven, Mozza is the perfect place for a casual lunch or dinner. Try the fennel sausage, mozzarella, red onions & scallions, lightly blistered on a perfectly chewy crust. For something a little fancier, try their sister restaurant, Osteria Mozza.

La La Land loves their sushi, and you’ll find so many options throughout the city. For see-and-be-seen crowds (aka celeb sightings!), Nobu or Sushi Tsujita are great. However, if you aren’t up to blowing a mortgage payment on dinner, try Hamma Sushi in Little Tokyo. It’s super casual, and does a great job with all sushi’s greatest American hits, like spicy tuna. Most Los Angeles strip malls in LA have a decent sushi place—I say if it looks fairly busy during lunch and dinner, it’ll be a good bet.

The Bazaar by Jose Andres 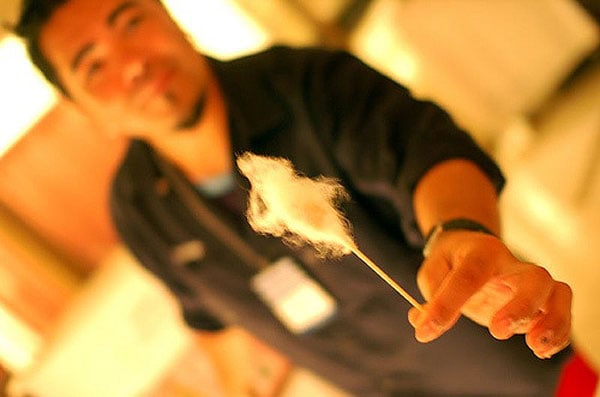 Hotel restaurants are often nothing special. Not at the SLS Beverly Hills, where James Beard Award-winning chef Jose Andres serves as culinary director. His restaurants are really more of an experience than a meal. Dishes look like works of modern art than food– think cocktails bellowing with smoke, or foie gras wrapped in cotton candy. A native of Spain, you’ll typically find lots of refined renditions of classic tapas, too. Come to think of it, I’d liken a meal here to eating in a real-life Dalí painting. Very, very fun.

Everywhere you look in Venice feels like an Instagram post waiting to happen. I barely feel cool enough to hang out in the Abbott Kinney area, but the food is worth it. Start the day off at Gjusta, a casual café known for its coffee, pastries, egg sandwiches, and lunch options. For pizza and other small plates to share, check out sister restaurant Gjelina. Pizzas range from the expected—think confit tomato, oregano and olive oil—to the slightly more adventurous, like lamb sausage and rapini.

For drinks, head to the Other Room, a dimly lit, minimalist bar pouring any kind of beer or wine you could possibly imagine. And if an after-dinner ice cream is more your speed, Portland-based Salt and Straw opened a scoop shop on Abbot Kinney (you can read more about that here). 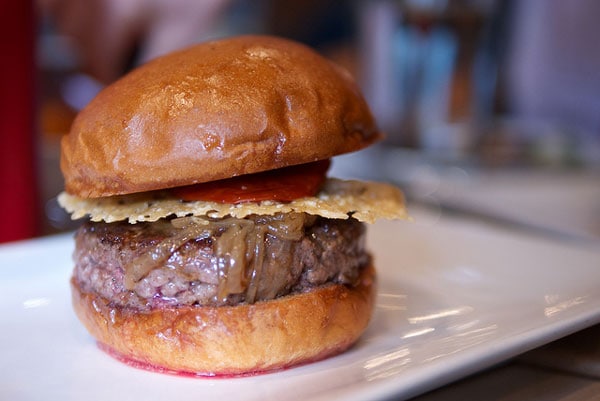 Everyone makes such a big deal of Los Angelinos being extremely healthy conscious… which makes me wonder why there are so many burger joints in this town! A few notable options: First, Cassell’s Hamburgers. Established in 1948, Cassell’s Hamburgers now resides in Los Angeles’s historic Hotel Normandie. Though it’s a little more polished these days, this hamburger shop still grinds their own premium beef, pattys the meat with their original press and cooks burgers with their original crossfire broiler.

Father’s Office earned a spot as one of Esquire’s Best Burgers in the World. Obviously this place is a must for any burger geek. A gastropub located in Santa Monica, their crown jewel is the Office Burger, topped with caramelized onion, applewood bacon, gruyere, maytag blue cheese and arugula.

Umami Burger started on La Brea and 9th just eight years ago. Since then, they’ve expanded to a few other American cities (and soon, Japan!). LA is home to over a dozen locations, with crowds still flocking to this burger joint for unique spins on burgers, like their ahi tuna burger topped with avocado, gingered carrots, wasabi tartar. Shoestring fries complete the meal.

You won’t see a sign for one of the hottest restaurants in town. Instead, look for a long line of patrons waiting to mow down on SQIRL’s natural, healthy-ish breakfasts and lunches you can only find in California. I’m talking gluten-free rice porridge, layered with chicken, brown rice, dried lime, ginger, turmeric, cardamom ghee, frizzled onions & cilantro; buckwheat pancakes; and brioche toast served with a generous dollop of ricotta and homemade jam. Sip on a turmeric tonic, made with fresh pressed turmeric, ginger and lemon… you’ll be feeling so LA in no time! 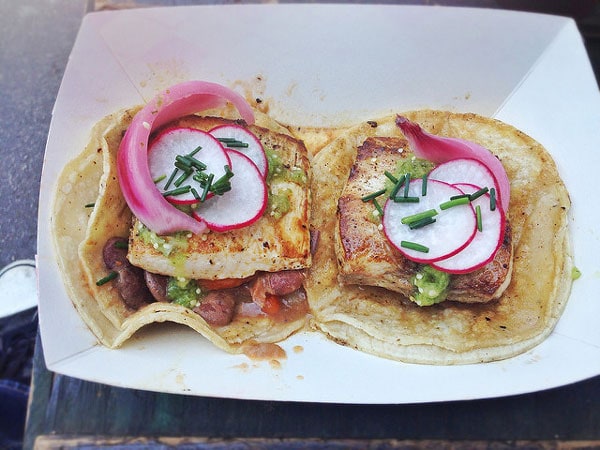 You can’t talk about LA food without mentioning tacos. This is the city that reimagined the food truck, and it all started with tacos… sort of. Roy Choi launched the Kogi BBQ taco truck in 2008, specializing in tacos, filled with Korean-style barbecue. People went bananas, and although many have imitated Choi’s style, no one does is quite as well. You can still find his truck on the streets of LA—here’s how.

Another beloved taco truck? Guerrilla Tacos. Founded in 2012 by classically trained Chef Wes Avila, this taco truck is a far cry from the fancy white table cloth restaurants he once cooked in, and yet the food is prepared with the same attention to quality and detail. Tortillas are made from scratch, and topped with stuff like roasted sweet potatoes, almond chile, fried corn, scallions and feta cheese. Check out their website for info on where they’re setting up shop.

What do you think are the best places to eat in LA? Share in the comments! 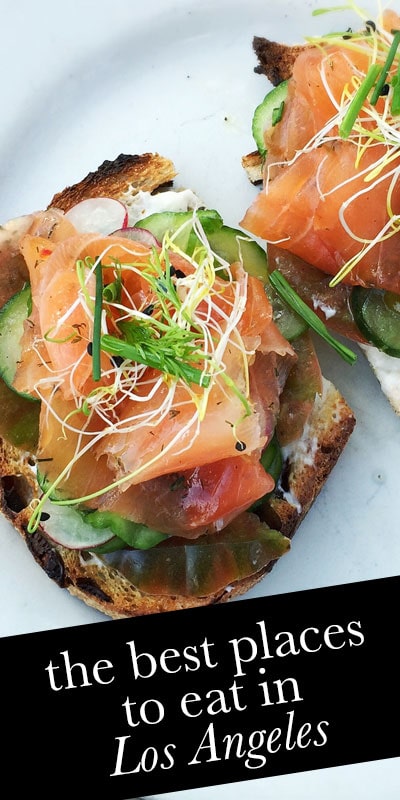 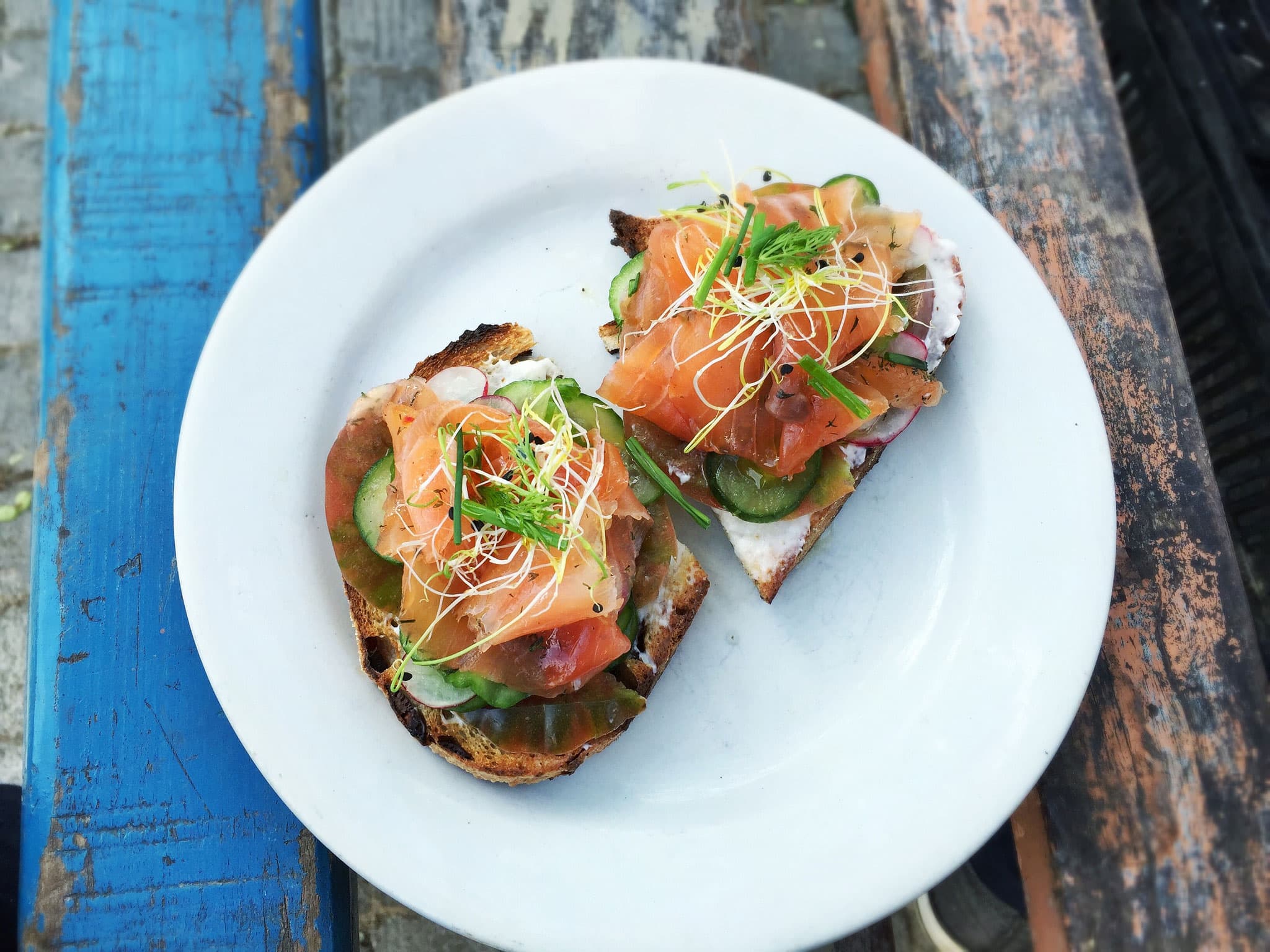