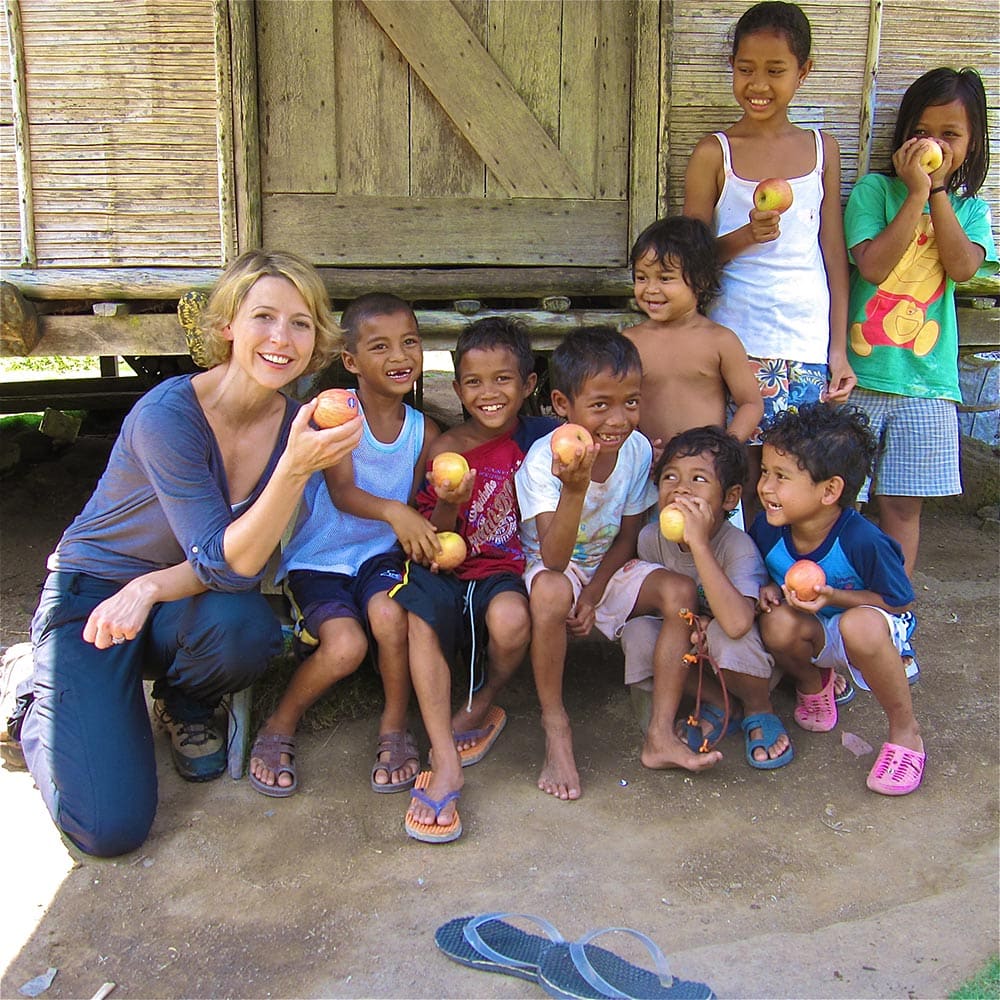 This is my favorite photo. I’m in Malaysia at a village of the Orang Asli (original people). Its customary to bring them something from the main town and so I brought apples. The children were extremely shy and very inquisitive about the color of my hair. Our guide and interpreter told me they had never seen blond hair before. I told him to tell them that it doesn’t run in my family either! I love this photo for the children’s faces each one of them is fully engaged in a wonderful exuberant expression.

Samantha Brown was born in Dallas, Texas and spent her formative years growing up in New Hampshire. Normal travel back then was loading up the family station wagon to visit relatives in Pennsylvania. Her biggest international trip was driving across the border once to Canada for a Quebec family vacation in junior high school… Oh the things to come!

After falling in love with the performing arts in high school, Samantha decided to pursue a Bachelor’s Degree in fine Arts from Syracuse University. The week after graduation Samantha moved to New York City, with her cat, to pursue her dream of being on the stage. Not surprisingly this lead to 8 years of waiting tables, auditioning and various roles in off to off off off Broadway productions.

HOW SHE GOT THE “BEST JOB IN THE WORLD”

Samantha’s career as a television travel host happened by accident. A producer spotted her work in a commercial and recommended her to the Travel Channel in 1999 to audition for a new show being developed called “Great Vacation Homes”.

The audition almost did not happen… Samantha missed her first audition in Jacksonville, Florida after she failed to make a connecting flight.  Thankfully It was rescheduled again for a week later.  Her initial flight the second time was also delayed and Samantha had just five minutes to make her connecting flight. She sprinted to the gate and arrived 10 minutes after the final boarding call.

A sympathetic attendant encouraged Samantha to try to board the plane, so she continued her run on the tarmac toward the small 50 seater jet located about 100 feet away.  A dispatcher interrupted her sprint, telling her it was too late to board.

Breaking down and through tears she told the dispatcher she had been waiting on tables for eight years hoping for a dream job like this. He relented, and told her only the flight’s pilot could overrule his decision.  As the dispatcher boarded the plane and explained the situation to the cockpit, Samantha ran the 100 feet and positioned herself under the nose of the plane. She looked up at the captain, opened her arms pleadingly and shouted “PLEASE!!!!”

A decade of series followed, including Great Hotels, Girl Meets Hawaii, Passport to Europe, Passport to Latin America, Green Getaways, Passport to China, Great Weekends and Samantha Brown’s Asia. In 2017, Samantha moved from Travel Channel to PBS and created her new show there called “Samantha Brown’s Places to Love”. Samantha’s fun-loving style has made her a revered and engaging television personality whose approach is less expert, less host and more a person you would want to travel with.

Over the last 17 years, Samantha has traveled around the world visiting over 250 cities in 62 countries and 40 of the United States creating over 160 hours of programming (and counting). After all of that traveling she reluctantly accepts her title as a travel expert, preferring jokingly the more humble title of Travel Goddess.

She calls herself an airport geek and enjoys her time spent in them (unlike everyone else in the world). Once in an airport, she loves to check the large departure board for where people are traveling to.  Even just seeing the names of exotic destinations like Istanbul, Casablanca and Jaipur make her want to travel more.

What Samantha enjoys most about travel is not necessarily the “must do’s” of a destination; visiting museums, castles and monuments. Her passion is to focus on the people, their culture, and the privilege of spending time in their everyday lives.

In 2011 Samantha debuted her stylish line of luggage on the Home Shopping Network. The line quickly became a “customer pick” and went on to be one of the top brand launches for the year.  Living out of a suitcase for over a decade, Samantha has enjoyed designing luggage as well as accessory cases, handbags and a packing system that bring ease and elegance back into travel and remind people that when it comes to their life they should Go Ahead and Jump In!

Samantha is currently filming her new series on Public Television (PBS), “Samantha Brown’s Places To Love”. With her new show she will take viewers on a discovery of the emotional heart of travel by highlighting the people who are changing, challenging and strengthening a destination to deliver a decidedly refreshing and enriching travel experience. Season 1 will air nationwide in January, 2018.