I’m really excited for the Super Bowl this year.  Why?  Because thankfully the NFL Playoffs gave me two incredible cities to explore in my own Travel Bowl.  I’m the kind of girl that can tell you a whole lot about where to go and how to get there, but I don’t really know anything about football.  I can get away with that most of the year, but then the Super Bowl comes along I can’t fake my way through a simple conversation about the biggest game of the year.  Before I started doing my own Travel Bowl, I didn’t even know which two teams were playing.  But now and I do, and I can share what I know about the cities the two teams call home.  Using my travel IQ, let’s see if we can forecast a winner.

I think we can all admit that beer and football go together like peanut butter and jelly.  You really can’t have one without the other.  Luckily for the beer enthusiast, both Seattle and Denver score points in this category. There are so many breweries in both cities that you can take a tour, stopping at the most popular craft and specialty brewers in each city, sampling the goods along the way.  In Seattle, try Road Dog’s Brewery Tour, it’s a great way to see the city and expand your beer horizons.  In Denver, take a two-hour guided walking tour of the LODO (lower downtown) area with Denver Microbrew Tours, you’ll visit several microbreweries and get a pint of your choice at the end of the tour.  You can also visit more iconic brands such as Red Hook in Woodinville (WA) or Fat Tire in Fort Collins (CO).

Winner? I would call this tie based on beer diversity and availability, but Denver has more breweries in the metro area than Seattle so I’ll give the Broncos this round.

If you love dramatic mountain scenery, sweeping vistas and wildlife then you’ve got to give both Denver and Seattle extra points for being so close to stunning National Parks.   Olympic National Park is a little over a two hour drive from Seattle making it convenient for a day trip.  You’ll want to hike the Hoh Forest and the Hurricane Hill Trail.   Near Denver, Rocky Mountain National Park is like being on top of the world.  Located about 1.5 hour drive from Denver, the park’s popular Trail Ridge Road crosses 12k feet providing amazing views or spend your day snowshoeing, tubing, fishing and spotting wildlife.

Winner?  Another close call!  Both cities offer spectacular mountain views very close to their skylines.  However, I have to give the win to Seattle for being so close to another National Park, Mount Rainier.

I’m generally a sucker for quaint, historic neighborhoods that have the feeling of a Normal Rockwell painting.  Pioneer and Larimer Square are downtown, historic settlements to put at the top of your to-do list. Seattle’s Pioneer Square was one of the first settlements in the Northwest U.S. and has kept a lot of its Old West personality.  You’ll find adorable art galleries, a totem pole stolen from Alaska natives, and numerous trendy shops and restaurants.  Take the Underground Tour to learn about Seattle’s quirky past.  In Denver, Larimer Square is the city’s heartbeat.  It is really cute and always switched-on.  Covered in lights, its festivals, art shows, shops and phenomenal restaurants are a big attraction to locals and visitors alike.

Winner?  Another close one…I’m going to give the call to Denver for its old-fashioned candy shops and incredible ambiance.

There are a lot really amazing things to do in both Seattle and Denver.  Plenty to keep the average adventure seeker busy for weeks.  In Seattle you’ve got the Pike Place Market and Olympic Sculpture Park.  In Denver, there’s Coors Field and the Denver Zoo.  However, when the trip is over and you’re heading home, what are the attractions that you must have crossed off your list?  In Seattle, it’s got to be the Space Needle.  Rising 605 feet into the air, it’s the place to see Seattle in all it’s beauty.  It might be hard to decide when to go up.  I say spend the money and go during the day, during sunset and then go back at night to see the city lit up.  The glass elevators give you a lot of time to soak in the 360 view of the city.  It’s really magical.  About 15 miles outside of Denver is the Red Rocks Park and Amphitheater.  It’s a natural venue for concerts and the park offers really nice hiking trails among some of the most breath-taking scenery anywhere.  If you can swing it, make sure you see a night concert.  It’s an experience you’ll remember forever!

Winner?  While I love the Red Rocks Amphitheater (can’t wait to go back), I have to give the Space Needle the win.  It’s iconic and the Seattle scenery is simply stunning.

In the end, I’ve wound up with a tie.  I’m going to go on a limb on this one and pick Denver for the win.  It’ll be a close game and Seattle looks really tough to beat, but I think the mile-high Broncos are due for a Super Bowl ring.  Before you Seattle fans go crazy, just remember that I don’t know a thing about football!

Post Game Update:  OK, so now you all REALLY know that I can’t forecast a winner of a football game.  More importantly, my Travel Bowl was more entertaining than the actual Super Bowl.  Go figure!

Go Jump in a Lake

Cowboy Heaven at the C Lazy U Ranch 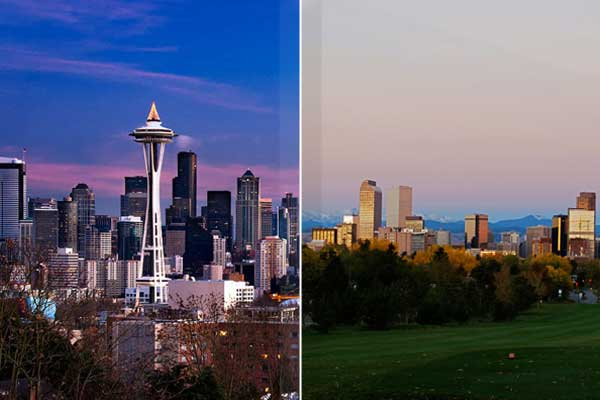