I’ll own up to it; I don’t follow the NFL that much.  I’m the kind of girl that can tell you a whole lot about an airline, but am not entirely sure of what a “sideline” is.  I can get away with that most of the year but there is one week, Super Bowl Week, where I can’t charm my way through a conversation and not have to admit that I don’t know anything about the teams that are going to play that Sunday.  This year is different, because San Francisco is one of my favorite cities in the world and since my husband comes from Baltimore, I’ve come to love that as well.  Armed with some knowledge of the towns the two teams call home, I have predicted a winner of this year’s game!  Here’s how I got there:

San Francisco’s Hippie culture faces off against Baltimore’s Hon culture.  This is a battle of long hair held back by a headband against long hair hairsprayed and pinned into the highest vertical pile physics will allow. It’s a battle of cotton, leather and natural fibers against the Hon’s love of polyester.  A battle of the Hippies’ round, John Lennon style glasses against the Hon’s catseye glasses.  A battle of the greetings “Peace, Man” vs “Hey, Hon!”.  The Hippies were famous because they “Tuned In, Turned On and Dropped Out”.  A Hon gets up every morning, hairsprays her beehive into submission and gets to work.  It was a tough call, but it was their native cuisines that helped me choose a winner.  Go to eat amongst the Hippies and you’re looking at eating raw organic soy paste on a bed of brown rice.  If you are eating amongst the Hons, you’re looking at traditional diner fare.  That means scrapple, meatloaf and french fries.  With gravy poured liberally all over everything.  That settled it.

It’s a battle of the town’s iconic parks.  Federal Hill is small in size, but makes up for it with views of Baltimore’s famous Inner Harbor.  San Francisco’s Golden Gate Park is over 1,000 acres and stretches from Pacific Ocean to San Francisco’s iconic neighborhood of Haight/Ashbury.  Federal Hill has some park benches, replica cannons (commemorating the Union Artillery that was pointed at the city during the Civil War to insure that Maryland didn’t join the Confederacy) and a few monuments.  Golden Gate Park has several lakes, a waterfall, a museum and windmills.  Real Dutch-style windmills.

This one is tough because I’m a fan of both of these dishes.  In Baltimore, the recipes for crab cakes vary from house to house and restaurant to restaurant, with no clear consensus on who’s are the definitive, hands down, best.  I’m a fan of crab cakes mostly because it’s a far more civilized way for this non-native to get her fill of the Chesapeake blue crabs without having to engage in the sometimes daunting (and mildly disturbing) practice of “picking” crabs.  Cioppino was born on the docks of San Francisco by Italian fisherman who would call to each other to “chip in” (it’s pronounced “chip in-o”) some of their day’s catch to a communal soup pot.  The result was a hearty brothy soup that contains any combination of shell fish and other kinds of seafood and is never exactly the same.  Fans of the soup will require a piece of sourdough bread to help sop up anything left at the bottom of the bowl, so that nothing is wasted.  In the end, I’m going with the dish which embraces and celebrates a community pulling together.

There are times where you just need to go on an honest-to-goodness, all-American, bar crawl and both of these towns have plenty to offer.  My favorite place to hit the town in San Francisco is the North Beach neighborhood.  It has just the right mix of funky, hip bars and restaurants tempered with the right mix of dive bars when you need to step away from the organic pomegranate cosmo that’s lovingly garnished with a thin slice of free range cucumber and just get a shot and a beer.  When I’m in Baltimore and in need of both libation and some harmless debauchery, I head straight to Fell’s Point.  Fell’s Point still retains some of its maritime charm while cramming bar after bar into a very compact area.  It’s a perfect location if you’re looking to maximize bar time and minimize crawl time.  In the end, it’s the crawling aspect that determined the winner.  The ground is fairly flat in Fell’s Point and the last thing I want to do when I’m enjoying some adult time is to climb hills.  Plus, climbing up those hills can be dangerous in heels.

In the end, I’ve wound up with a tie.  I’m going to go on a limb on this one and go with a Baltimore win.  Before my friends in San Francisco get too worked up, please remember that my husband is from Baltimore and his family is cheering on the Ravens.  There could be real trouble if they happened to read me predict a win for the 49’rs (even though that’s what Vegas is calling for!) at the cost of their beloved team.  At the end of the day, I’ve got to live with these people.

Which city would win your Travel Bowl? 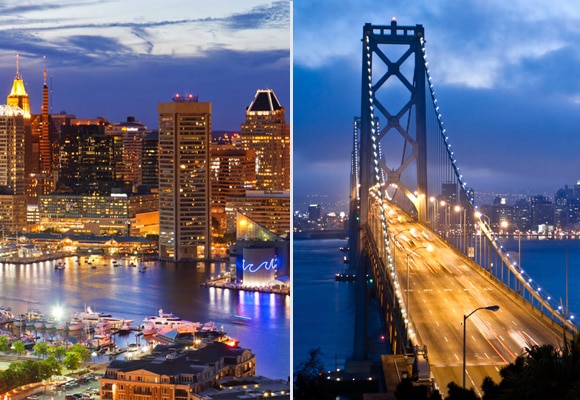