May marks National Burger Month. Is it just another one of those totally fabricated celebrations? Yep, and I am okay with that! For a lot of people, food and travel go hand-in-hand. So if you like to eat as much you like to travel, combine the two and hit up some of these iconic burger joints. 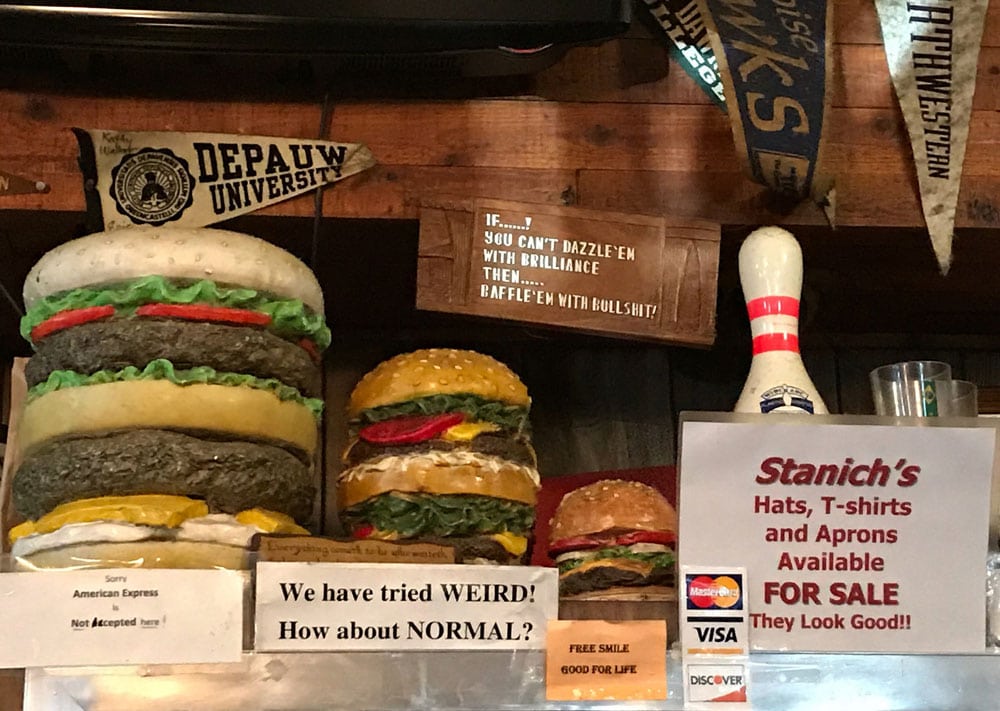 This city has quite the reputation for being hipster, but Stanich’s started grilling up fantastic burgers well before Fred Arminsen was born. Owned and operated by the Stanich’s since 1949, this is the quintessential family restaurant, outfitted with pennants and memorabilia from sports teams, a worn wood bar top and vintage bar stools. Most burgers are named after family members, including the Gladys (who was apparently partial to a Swiss patty melt on rye with fried onions); and the George (who loved his bacon cheeseburgers).

If your eyes are drawn to the tap wall instead of the burger…..congratulations! You’re a beer geek. #fathersoffice #burgersandbeer #beergeek

There are a lot of great places to grab a burger in LA. There’s The Counter, Umami Burger and of course In-N-Out. You really can’t go wrong at any of these spots, but for more of a sit-down burger experience, head to Father’s Office. This counter-service only gastropub offers a wide selection of brews that pair perfectly with their famous burger. It’s on the fancier side, with caramelized onions, arugula and bleu cheese, but it’s absolutely delicious. With locations in Santa Monica, Culver City and Downtown (coming soon!), you may not even need to commit to braving LA’s infamous traffic! 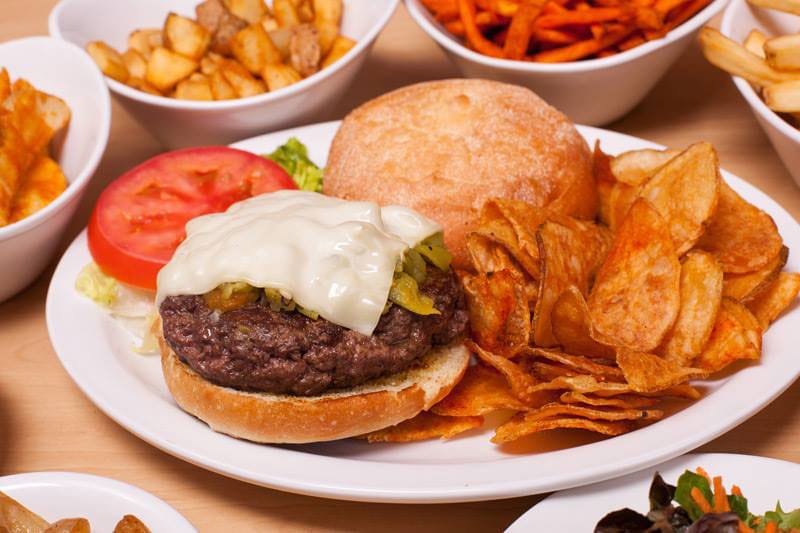 The Southwest loves their spice, and when it comes to burgers, it’s all about the green chiles. Many places throughout New Mexico and Arizona make great versions, but the one served at Sante Fe Bite gets the most press. Beef, diced roasted green chiles, and melted cheese. It’s not too spicy, either—just enough to give it regional flair, which I absolutely adore.

From tacos to bbq, Austin does casual food so well. Burgers are no exception. There are lots of places to grab an old school burger (P. Terry’s, Hut’s and Top Notch all serve up that nostalgic vibe), but for one of the best new school options, try the Plancha Burger at Launderette. Rene Ortiz and Laura Sawicki, one of the city’s most beloved chef-pastry chef combos, elevate the quintessential burger, topped with American cheese, special sauce and pickles. The restaurant does yummy sides like butter lettuce salads, grilled broccoli, and yes, frites if that suits your fancy. 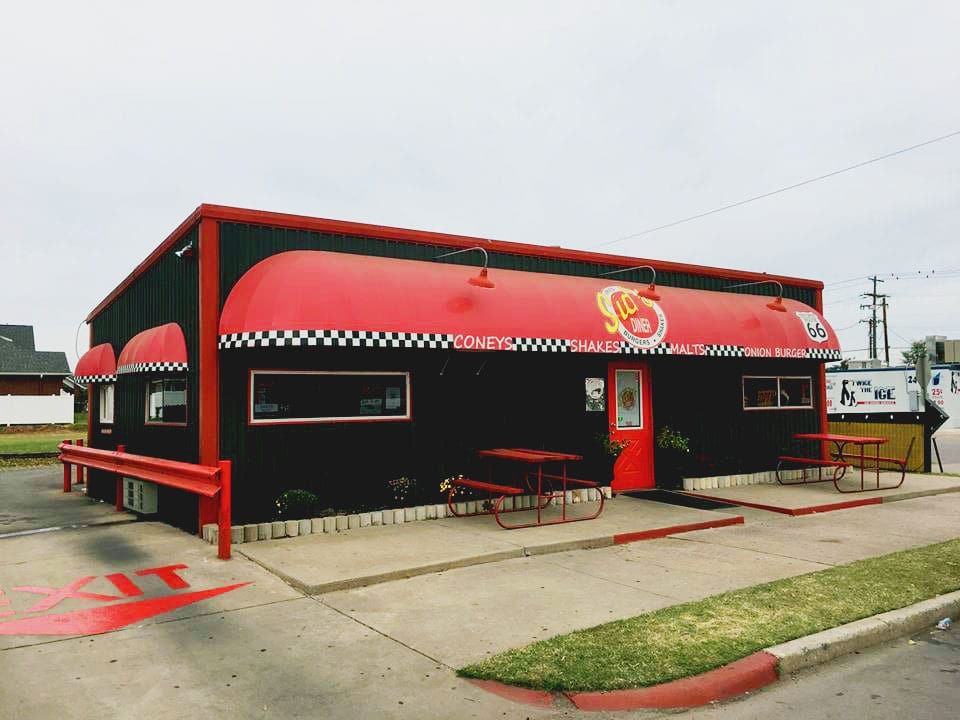 A half an hour’s drive west of Oklahoma City, you’ll find the unassuming small town of El Reno. Located along the famed Route 66, El Reno is also on the map for its simple and delicious contribution the country’s culinary scene: the fried onion burger. Born during the Great Depression, when onions were cheap and meat was expensive, onions were smashed into the meat with the back of a spatula, grilled with the meat. It’s not pretty, nor is it fancy, but it is tasty! El Reno offers three spots to try this local legend: Sid’s, Robert’s, Johnnie’s. I dare you to try them all. 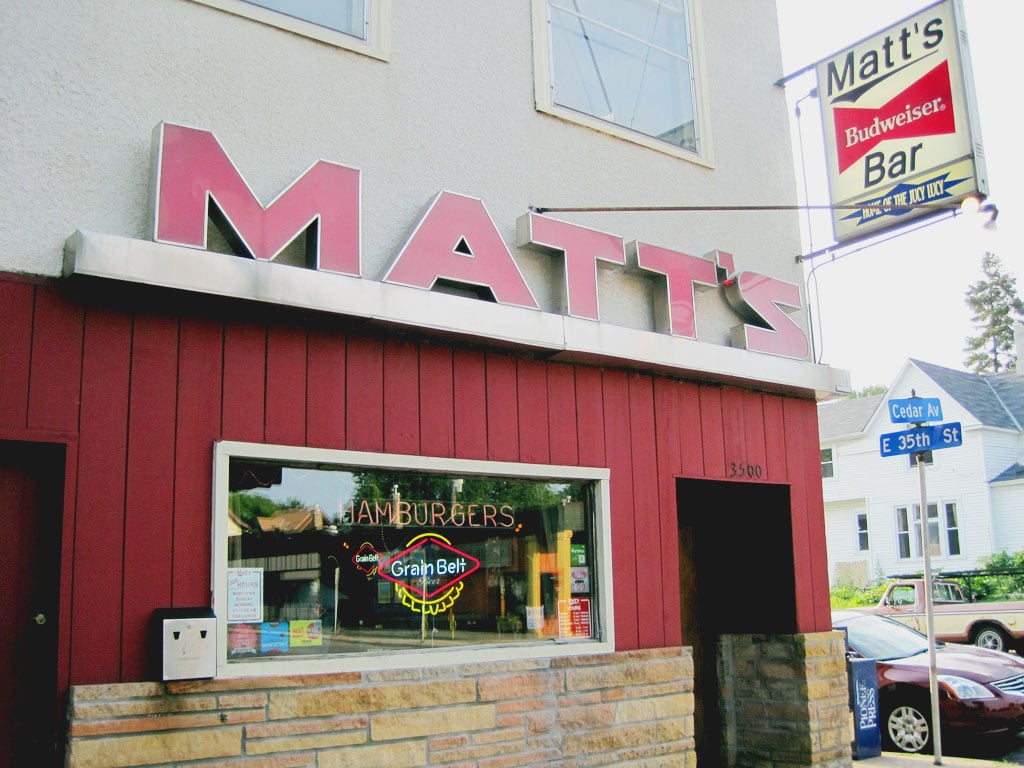 It’s the inside-out cheeseburger that many Twin Cities restaurants lay claim to. The Jucy Lucy (or Juicy Lucy, depending on where you go) is a cheeseburger made with cheese inside the center of the patty. The result? A molten-hot, cheese-filled delight. The 5-8, Blue Door Pub and the Nook all do great versions, but you can’t beat the ambiance at Matt’s Bar on Cedar Ave. Surly waitresses, cans of “pop” served sans ice, pitchers of beer… it’s a local gem. 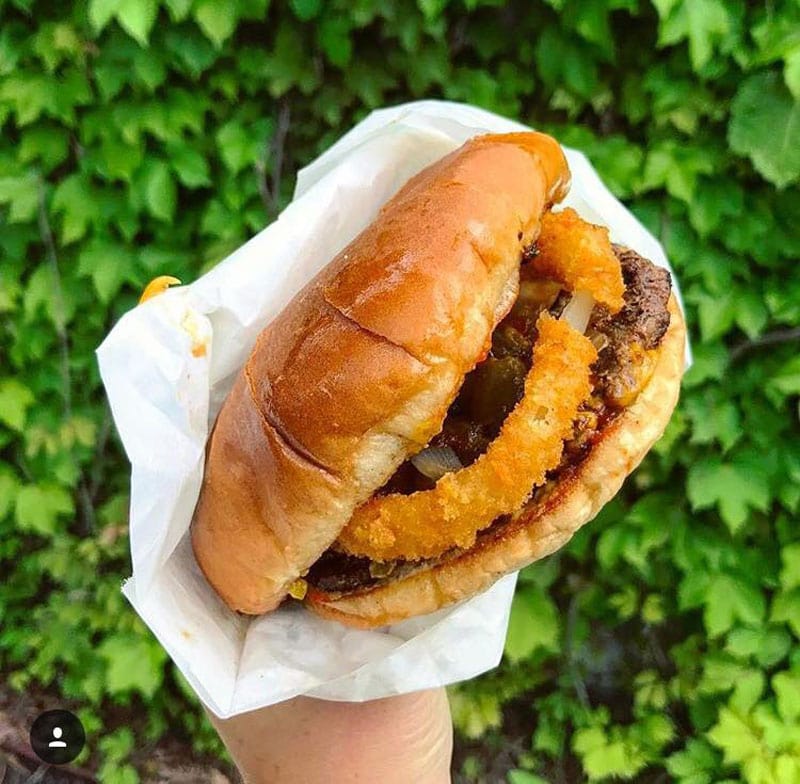 Known for its dairy industry, it would only make sense that the key ingredient in Wisconsin’s most beloved burger is butter. Creatively named the “butter burger,” you’ll find all sorts of hand-pattied beef grilled then slathered with generous amounts of butter. No road trip through Wisconsin is complete without a stop at a Culver’s, and there’s a handful of other spots, like Solly’s in Milwaukee or Gosse’s in Sheboygan, that do a killer one. But for my money, I say head to Kopp’s for a butter burger followed with their famous frozen custard. 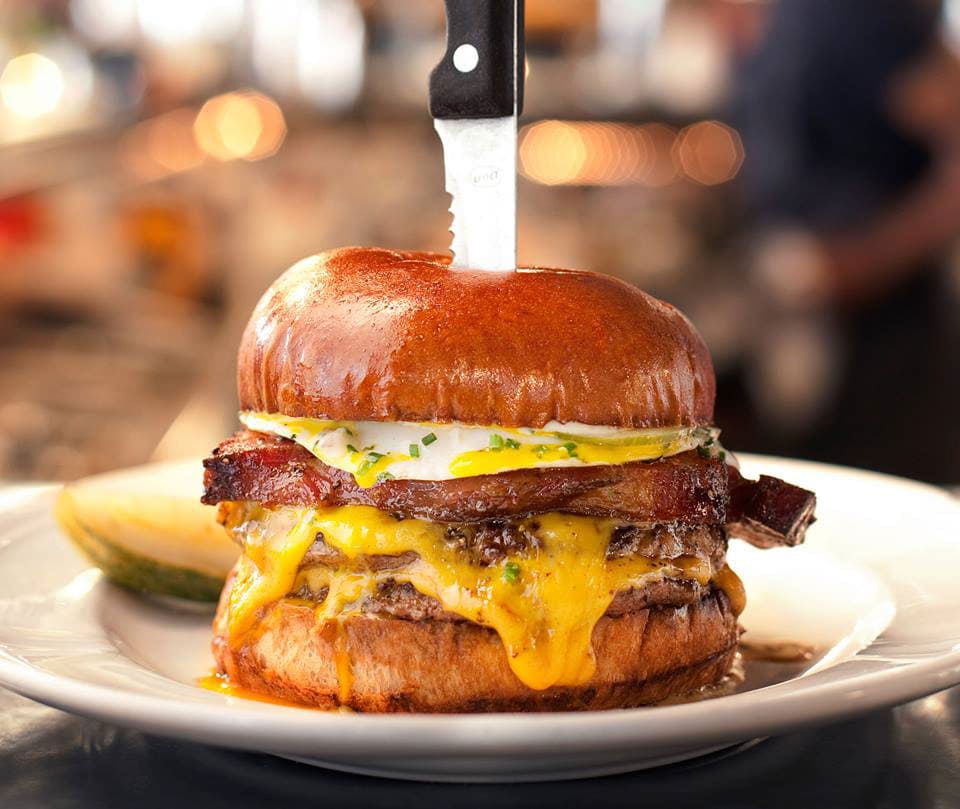 Though only open since 2011, Au Cheval feels like one of those places that’s been there forever. The dark and cozy spot serving upscale diner fare is beloved for many reasons (great cocktails, beer and fried bologna sandwiches, to name a few), but it’s their burger that patrons are still queueing up for all these years later. Order yours with an egg on it. You won’t regret it. 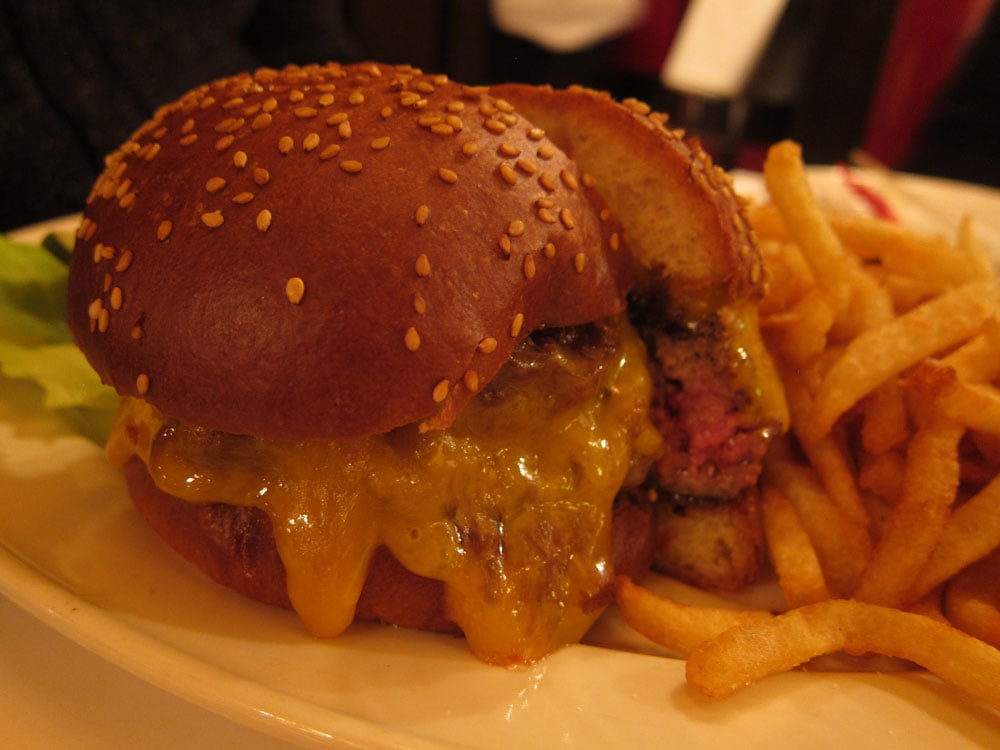 New York has no shortage of great burgers. From JG Melon’s juicy tavern burger to the country’s biggest game changer in the quick-service burger industry (NYC is home to the original Shake Shack, after all!), you’ll find a burger for every belly and budget. For the mack daddy of them all, head to the legendary Minetta Tavern. Open since 1937, this place teems with nostalgia. Ernest Hemingway used to hang out here, and it’s not uncommon to see famous faces still today. Since undergoing an overhaul circa 2009, the burger has remained a serious draw. Made with a custom dry-aged rib steak blend, topped with cheddar and caramelized onions, the Minetta Burger is simple… but with a $25 price tag, you know it’s gotta be something special (and it is!). 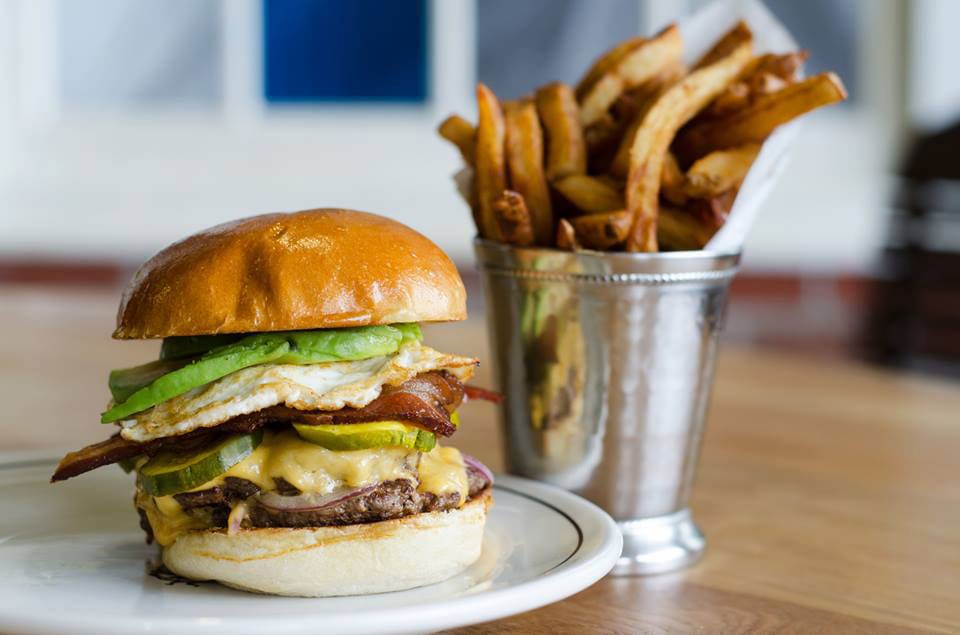 When Linton Hopkins opened Holeman & Finch in 2008, the doublestack burger became a thing of legend. It came with a few stipulations: you couldn’t order the thing until 10 p.m., and they only made 24 a night. It became a “thing,” and since restaurant’s tiny kitchen had a hard time keeping up with burger demand in addition to all the other menu options, opening a burger-specific spot seemed like the thing to do. Now you can get this iconic burger all day long at H&F Burger, as well as at Suntrust Park. The original is made with Cox Family Farm’s Double beef patty, b&b pickles, shaved red onion, Kraft American cheese, but they also do great veggie, bison, lamb burgers and more.

What’s your favorite burger spot? Share in the comments! 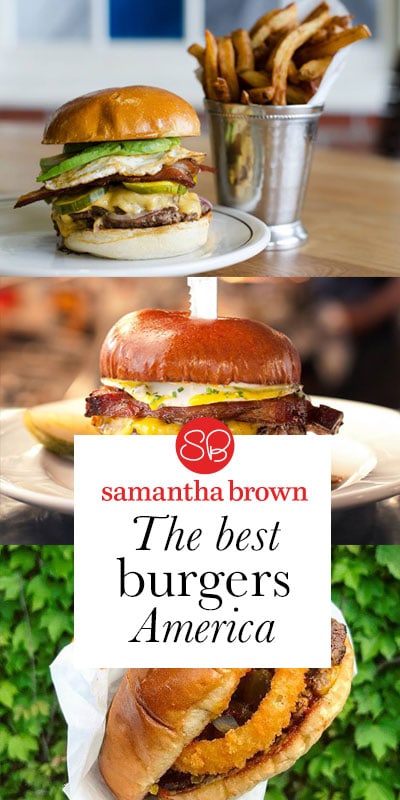 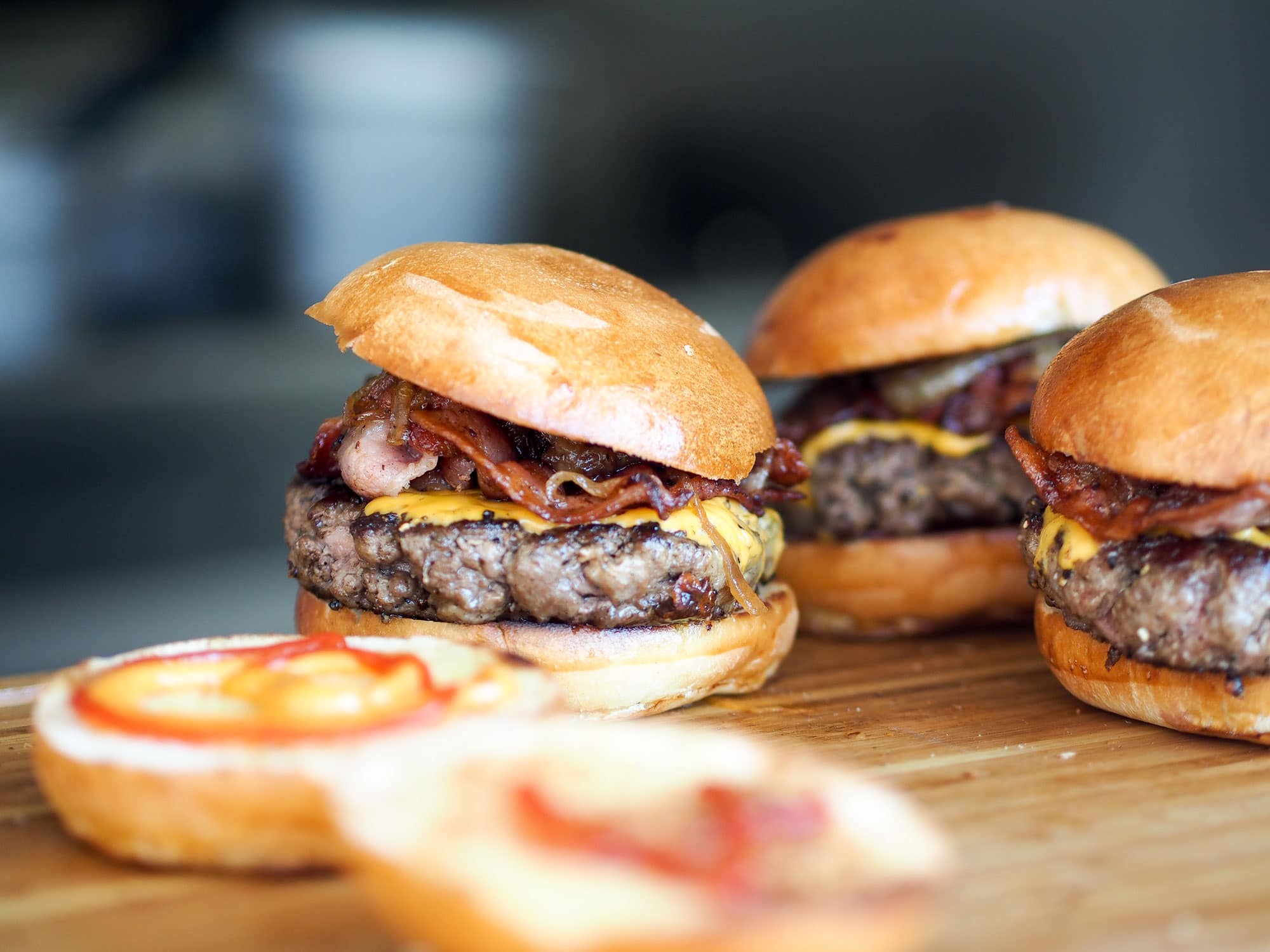