Looking for where to eat in Louisville, KY, and where to drink? You’re in the right place!

It might surprise anyone who’s only vaguely heard of Louisville, but this city is as historic as it is modern. It’s actually one of the oldest cities west of the Appalachian Mountains and was officially established in 1778, though American-born Frenchmen were settling the area before then. Perhaps its most famous export, bourbon, came with the Scotch-Irish as they settled further west following the Revolutionary War.

Even so, the city still feels young and fresh. It’s this juxtaposition between old and new that can be seen best in its food and drink offerings. While Louisville has the benefit of having both Southern and French influence in its local cuisine, its restaurant scene still feels less established than other big cities, thus leaving plenty of room for innovation both in the menus and atmospheres.

There are so many unique things to do in Louisville, but the major thing you cannot miss are the below places to eat and drink. When planning your weekend getaway, be sure to wear your most comfortable pants and dresses to fully enjoy all the city’s food scene has to offer.

Where to Eat in Louisville, KY (and Grab a Drink!)

Located in the historic Clifton neighborhood of Louisville, Bourbons Bistro is situated in a building that dates back to the 1870s, right around the time when bourbon began to be known as bourbon. When they began the bistro, owners and Louisville locals, Jason Brauner and John Morrison had one ambition – to have one place that not only served up some incredible food but would also offer every Kentucky-made bourbon. I mean, every. Ever since opening in 2005, Bourbons Bistro has offered over 130 brands!

To complement this drink selection, the restaurant also offers a seasonal, locally-sourced menu. Its executive chef, Jereme McFarland, is also a Louisville native who got his start as a full-time cook for the Marine Corps before studying the culinary arts at Sullivan University. The menu is mainly focused on Southern cuisine with some extra flairs inspired by various cuisines around the world.

I came with Jamar Mack, a local bourbon expert and founder of Kentucky’s Original Black Bourbon Enthusiasts (K.O.B.B.E.), who explained this was a great spot for a more traditional way to do some tasting. Be sure to grab some seats out on the bistro’s patio and you might just see certain reject sluggers feeding the cozy fire.

When it comes to where to eat in Louisville, nowhere is quite as iconic as The Brown Hotel. This Georgian Revival 5-star property manages to be as opulent as it is relaxing and inviting. This is most likely because of its long, intertwined relationship with Louisville. Ever since opening in 1923, it’s played a key role in the city’s history. From providing refuge for flood victims to offering relief for World War II soldiers, the hotel probably has more stories than we’ll ever know.

However, its most notable selling point isn’t its rooms or its history but a special dish known as The Hot Brown. Even if you don’t book a room at The Brown Hotel, you have to make plans to come and try this bucket list dish.

The origins of The Hot Brown go back to the hotel’s early days in the 1920s when it hosted over a thousand guests every evening for a massive dinner dance. After hours of dancing and socializing in the cold night air, guests were hungry. The chef back then, Chef Fred Schmidt, decided to serve a fancier dish than one might usually find in the early hours of the morning.

He then created an open-faced turkey sandwich that would be made with a creamy Mornay sauce and the most perfectly crisp bacon. This simple sandwich became a quick favorite and its legacy continues to this day! Some might argue it’s on par with bourbon and the Kentucky Derby in terms of Louisville fame. 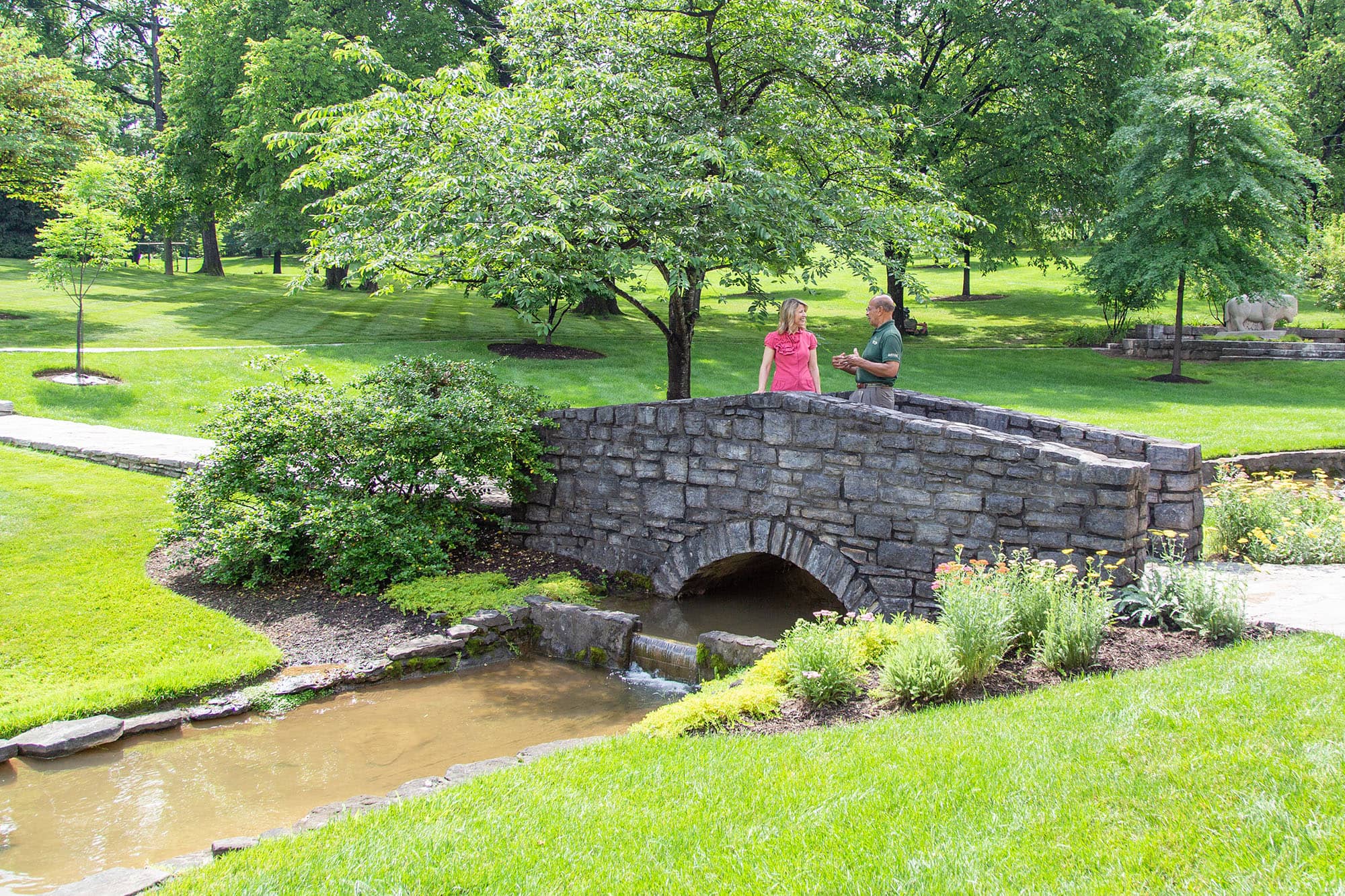 At over 200 years old, Buffalo Trace Distillery is the oldest continually operating distillery in the entire United States. If you’re doing the math, that means, yes, it even remained in operation during the Prohibition Era between 1920 and 1933.  They were allowed to distill 100 proof whiskey as a headache prescription when nearly every other distillery was made to stop production altogether.

The name comes from the history of the distillery’s location. Back when we had new frontiers to explore, pioneers would follow the paths buffalo created, something they found easier to follow than trying to create one on their own. One of these paths led to the Kentucky River which is where Buffalo Trace Distillery can be found.

Today you can find a number of homegrown brands here, and it’s won pretty much every award in the book.

When you visit be sure to book a tour to learn more about its history and if you want a really special tour, ask for Freddie Johnson. Freddie is a Kentucky native and is the third generation of Johnson men to work at Buffalo Trace. He’s passionate about bourbon and has the unique benefit of having childhood memories hanging out on the grounds as a kid! 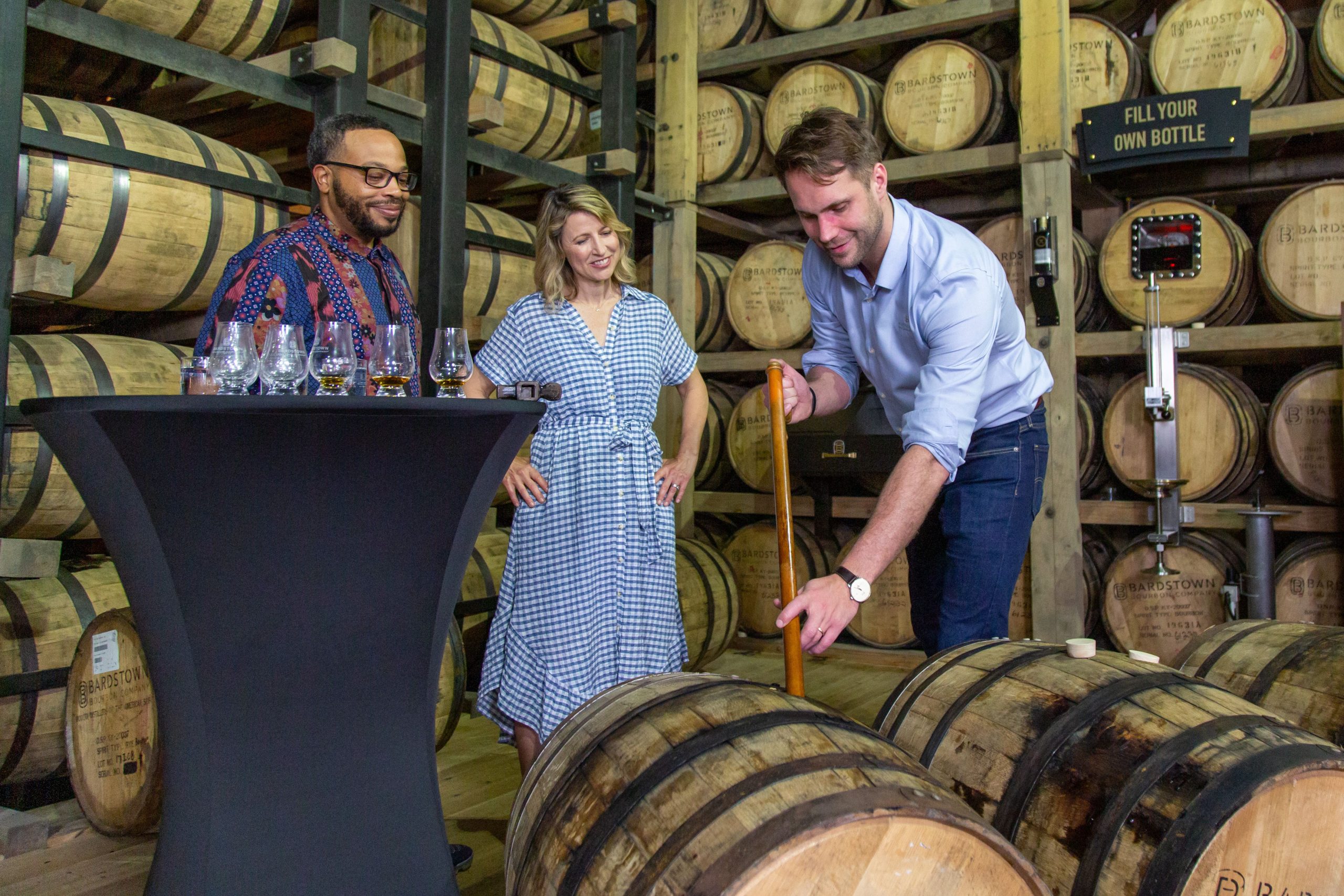 If Napa Valley has wine then Bardstown has bourbon. Initially settled in 1780, it’s Kentucky’s second-oldest city and often listed as one of the country’s most beautiful small towns. More importantly, it’s known as the “Bourbon Capital of the World” and only a 50-minute drive from Louisville. As it’s home to nine notable distilleries and part of the Kentucky Bourbon Trail, trust me it’s worth the small commute.

Unsure of which distilleries to try? I recommend heading to Bardstown Bourbon Company. Situated on around a hundred acres of farmland, Bardstown Bourbon focuses on innovation while still respecting the traditional art of whiskey making.

What really sets them apart is their approach to the bourbon experience. Tapping into that Napa Valley comparison, they’re the only distillery on the Bourbon Trail to offer a full-service restaurant. Everything on their menu is sourced locally and focuses on Kentucky classics with a slight twist. One dish you have to try is their Kentucky poutine!

For those looking for a fine dining experience, just head over to the beautiful 610 Magnolia in Old Louisville. The restaurant is owned by Chef Edward Lee, who foodies may have heard of from either of his books, Smoke & Pickles and Buttermilk Graffiti, or his role on “The Mind of a Chef,” which garnered him an Emmy nomination. He’s also been a James Beard Foundation Best Chef: Southeast finalist multiple times and has won a James Beard Award for Best Writing.

As 610 Magnolia’s current chef-owner, Lee takes a modern approach to the Southern Table. The menu changes weekly, and the restaurant is strongly committed to locally sourcing their produce and working with responsible farms. They even have their own greenhouse.

Make reservations for their multi-course tasting menu and be prepared for a relaxing evening full of elegant dishes with soul.

Don’t let the shark decoration scare you off! Hammerheads is a casual spot that specializes insanely delicious pub grub and great beer. Located in a 100+ year old house in Louisville’s Germantown neighborhood, this small smokehouse is a huge favorite amongst locals.

It was started almost by mistake by Chefs Adam Burress and Chase Mucerino when Burress went to buy commercial equipment from a place going out of business. When he saw what a special space it was, he tapped Mucerino to be his business partner and Hammerheads was born.

Wear your eating pants because everything on this menu is rich and delicious. I’m talking duck fat fries, smoked mac & cheese, a dish called PBLT (pork belly BLT), and more.

The Silver Dollar has quite a unique source of inspiration – something known as the “Bakersfield Sound.” This phenomenon  comes from the first half of the 20th century when numerous people from the Dust Bowl migrated to California in search of a better life. While there they were shunned by local Californians for everything from what they ate to the music they played. Sticking together, they created a subculture that would impact music as we know it.

Located in a renovated firehouse from the 1890s, The Silver Dollar pays homage to these gritty, hardscrabble Southern transplants through its decor, atmosphere, and, most importantly, its food and bourbon. Its menu is is inspired by what they imagine would be served at a 1950s honky tonk in Bakersfield, blending both Southern and Californian influences before adding a modern twist. Truly a unique spot in the Louisville food scene!

As you can see, when it comes to where to eat in Louisville, KY as well as where to grab a drink, you’ll have a huge array of options. The culinary scene is truly young compared to city’s incredible history, which allows for an exciting experience that still pays respect to the state’s Southern and French roots. From bourbon to The Hot Brown and more, you won’t have any issues finding delicious places to fuel up!

If you want to see more of Louisville, check out our Louisville episode of Season 5’s “Samantha Brown’s Places to Love”! 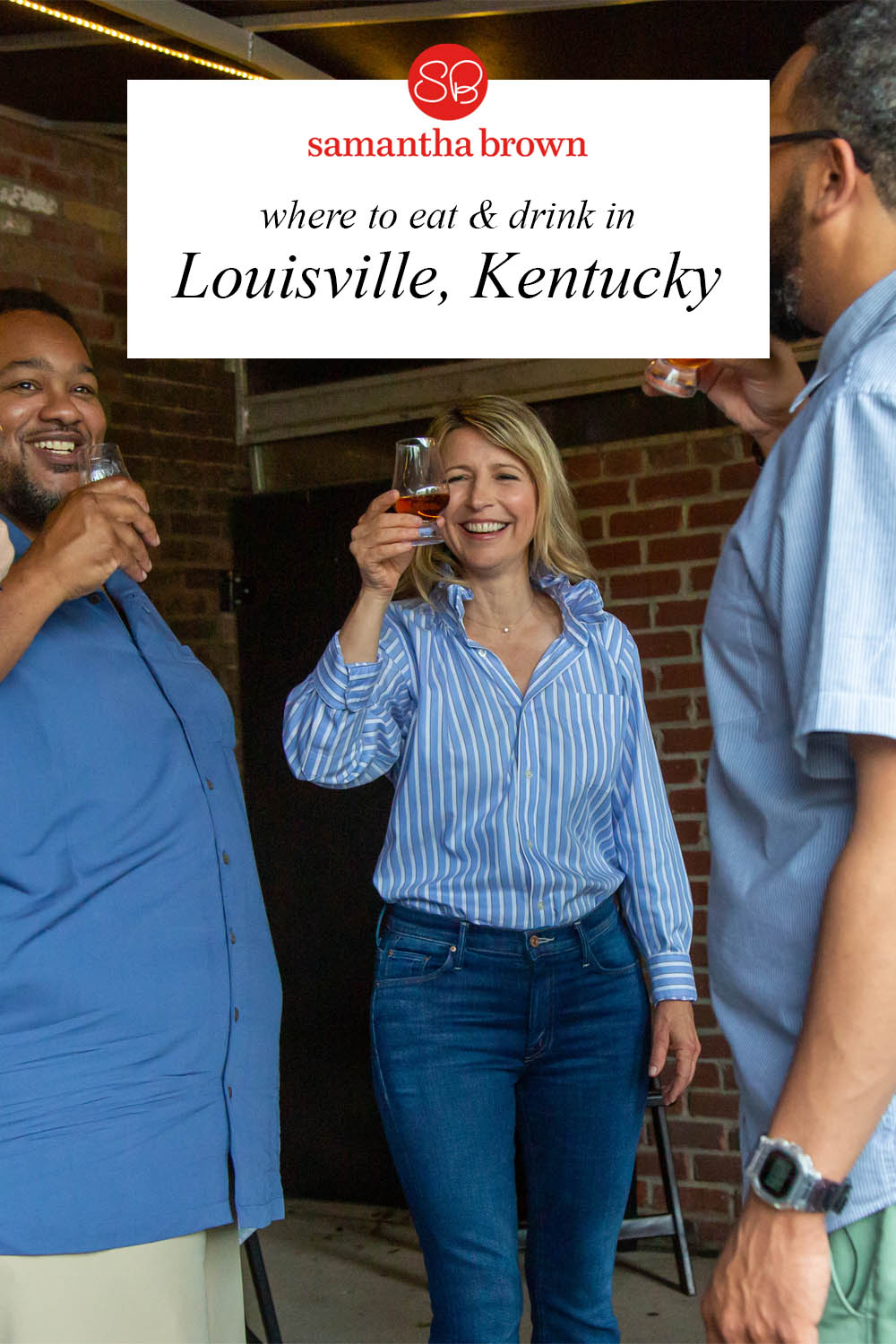 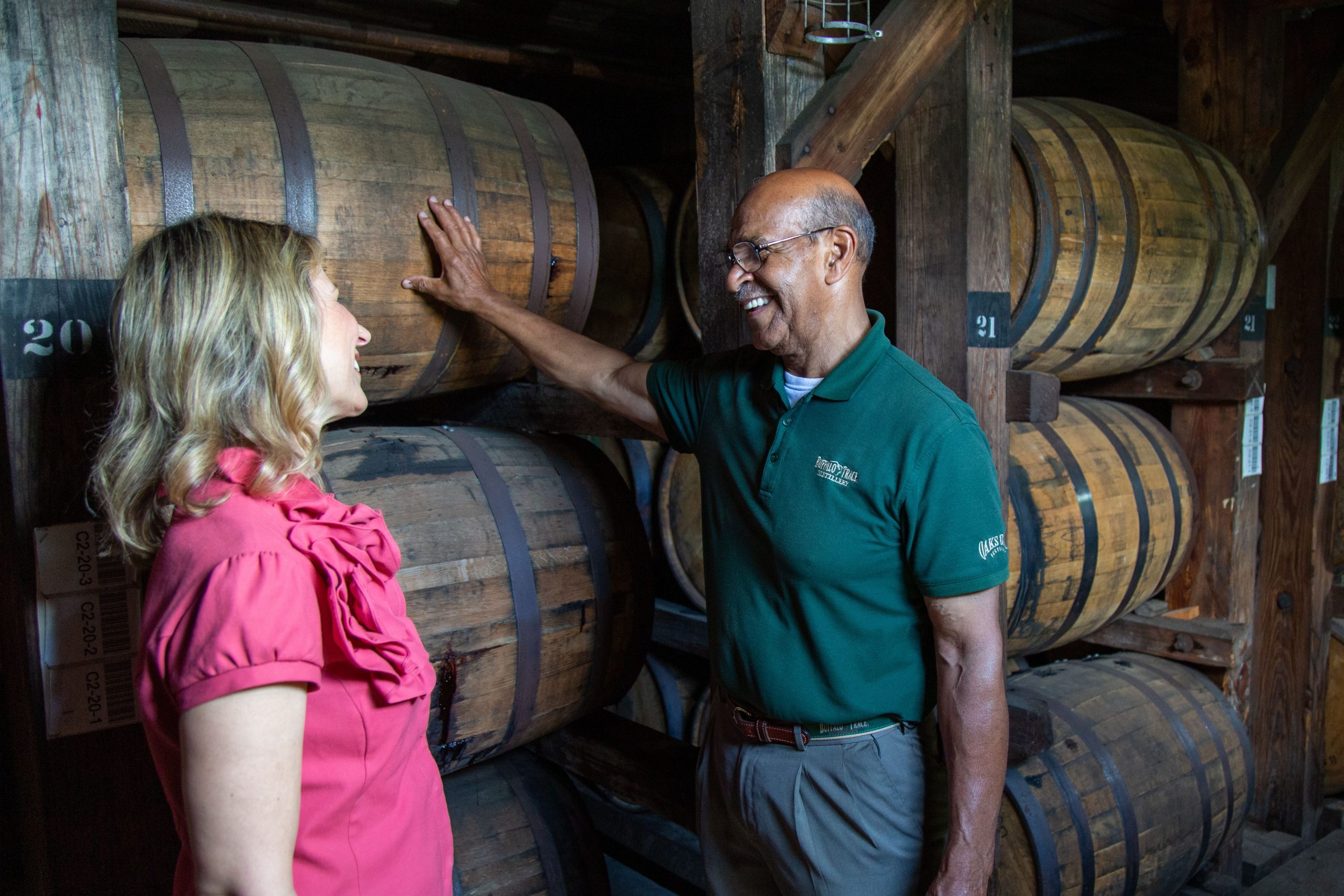