If you need just one more reason to book a weekend in Houston, know we loved our time in this city so much, we filmed not just one but two episodes of “Places to Love” here. That’s right! Not only did we kick off our show with a visit to Texas’s biggest city, but we also jumped at the chance to return in Season 5.

One of the things I love most about Houston is how diverse it is. This means you can visit weekend after weekend and plan a radically different itinerary each time. If you think I’m kidding, just know they take their city motto, “The City with No Limits” very seriously Not only are they home to over 150 museums, but they’re also home to over 20 recreational parks. Not to mention there are thousands of restaurants that cater to the many, many communities that call Houston home.

I promise once you spend some time here, you’ll see just what it feels like when you combine the energy of a metropolitan city with the inclusivity of a tight-knit community. From historical locations to innovative new shops and, of course, an array of places to eat, here are my best tips for spending a wonderful weekend in Houston.

Incredible Places to Visit During Your Weekend in Houston 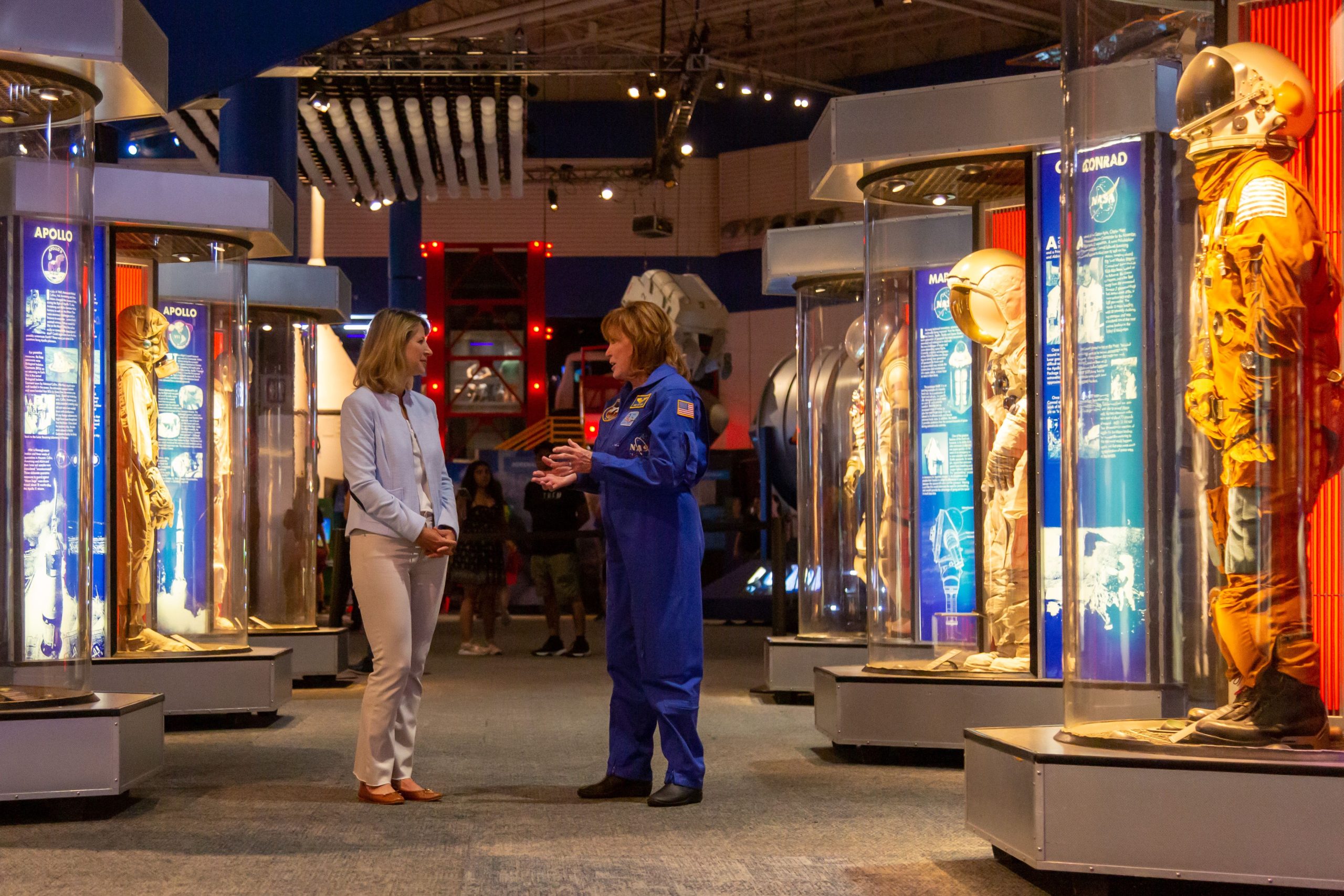 Anyone even a little familiar with NASA knows it has some sort of long history with the city of Houston. After all, its Mission Control Center has been here since 1965 and the phrase, “Houston, we have a problem” may be one of the most famous space-related phrases after “One small step for man, one giant leap for mankind.”

For around the last thirty years, the Space Center Houston has allowed visitors to learn even more about America’s space exploration and technological advancements. With over 400 artifacts and exhibits, you can easily fill up an entire afternoon wandering the center in awe at all that NASA has managed to achieve. 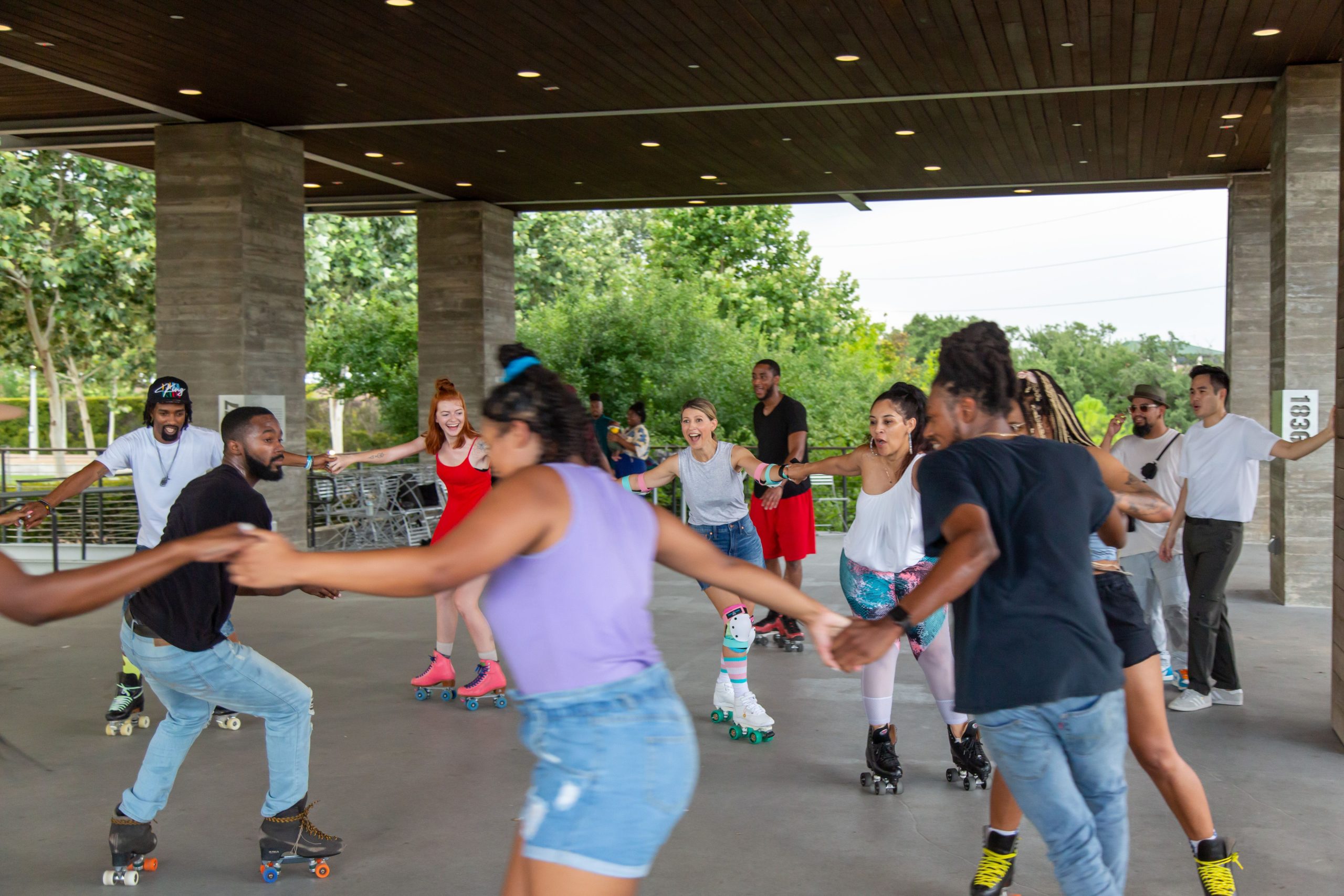 Are you a fan of rollerblading? Head over to the Lee and Joe Jamail Skatepark in the Buffalo Bayou Park. It’s one of the largest in Texas with over 40,000 square feet of land you can skate around.

To make the visit even more fun, turn a pair of sneakers into custom-made skates with Daisies & Pancakes. Send them in ahead of time and pick them up on your visit before heading over to the skatepark to try them out.

Museum-lovers rejoice! The Houston Museum District has 19 different museums over four walkable zones. The district was formed back in 1997 and aims to utilize its space to provide “artistic, scientific, and educational resources” for all Houston citizens and visitors.

While you have classic museums such as the Museum of Natural Science, Museum of Fine Arts, and the Contemporary Arts Museum, you also have more unique spots like the Rothko Chapel, a non-secular sanctuary for those looking for calm, or The Jung Center, which runs meditations to help visitors cope with stress. 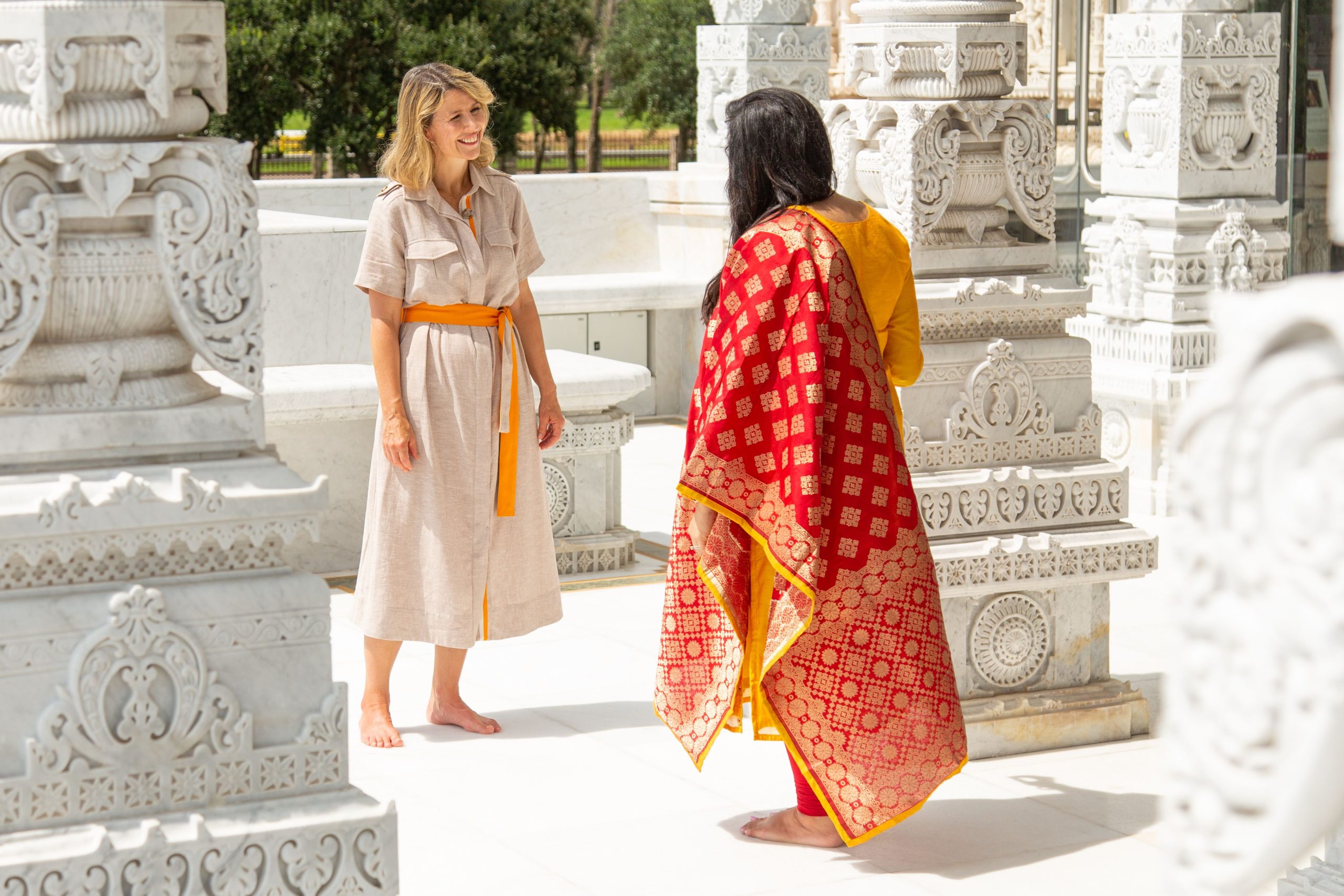 One look at this incredible Hindu temple, and you’ll feel as though you’ve been transported to Agra or Udaipur. That’s because the BAPS Shri Swaminarayan Mandir was constructed by over 3,000 craftsmen from all over India. This special temple sits just a little outside of Houston and truly has to be seen to be believed.

When you visit, be sure to dress modestly and respectfully.

For a truly unique experience in Houston, book a tour with Project Row Houses (PRH). This project began in 1993 when seven African-American artists decided to transform a block and a half of shotgun houses into a space that would bring together all they were passionate about: art, preservation, community engagement, neighborhood revitalization, and, at its core, human empowerment.

There are a number of ways to visit, which you can find on their website. One of the coolest aspects of Project Row Houses is that they have a biannual event known as “Artist Rounds” in March and October. Seven-row houses are open with different installations and last four months, so even on future return visits, you’ll find something brand new.

If you’re looking for cool souvenirs to bring back from Houston, then look no further than Magpies & Peacocks, the country’s only 501(c)3 non-profit design house that’s specifically dedicated to both the collection and sustainable reuse of post-consumer clothing and accessories.

They collaborate with all sorts of designers and artists to create luxury up-cycled products that range from clothing to jewelry to home goods and more. Hopefully, you left enough room in your suitcase for all the cool items you’re going to want to bring back! 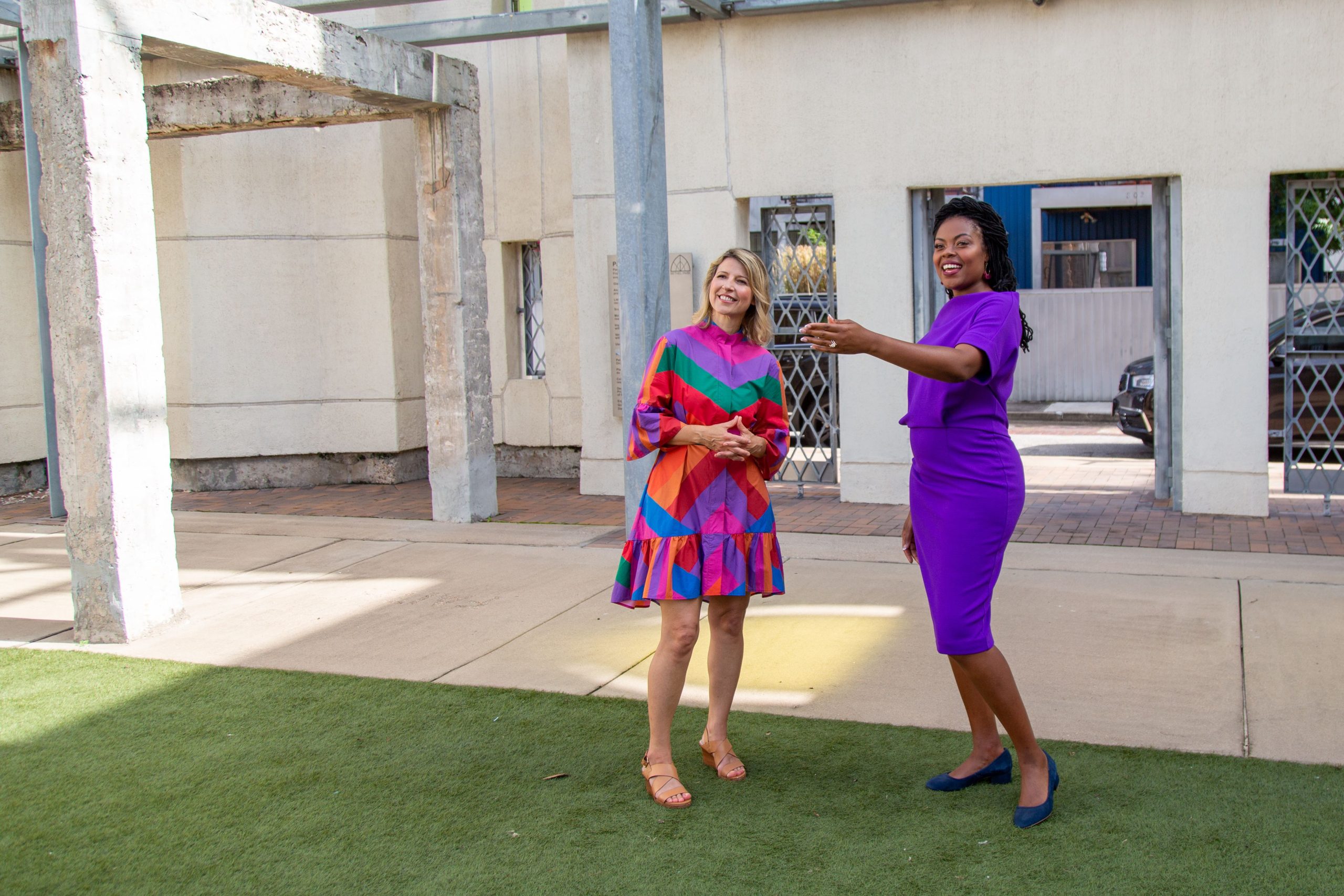 Freedmen’s Town is Houston’s very first heritage district and was founded in 1865 when many newly emancipated slaves from around the South settled here, seeking a community safe from the post-war uncertainty. Under the guidance of John Henry (Jack) Yates, a former slave turned Baptist minister, the area flourished. Once it was home to over 400 businesses, though today only 40 of those structures remain preserved.

One of those structures is the Antioch Missionary Baptist Church. The very pews of the church were hand-carved by ex-slaves and the current minister, Reverend Art McElroy, just so happens to be married to the great-great-granddaughter of Jack Yates, Jacqueline Bostic-McElroy, Esq.

The Beer Can House

Yes, you read that correctly. The Beer Can House. And yes, its name comes from the fact that something like 50,000 recycled beer cans cover this home! This is truly one of the most unique things to do in Houston. It all started in the sixties when John Milkovisch began covering his home in beer cans, a project that took around 18 years. (After all, it’s not advised to drink that much beer in one go!)

You can visit The Beer Can House on the weekends, just be sure to purchase tickets ahead of time.

Where to Eat During Your Weekend in Houston 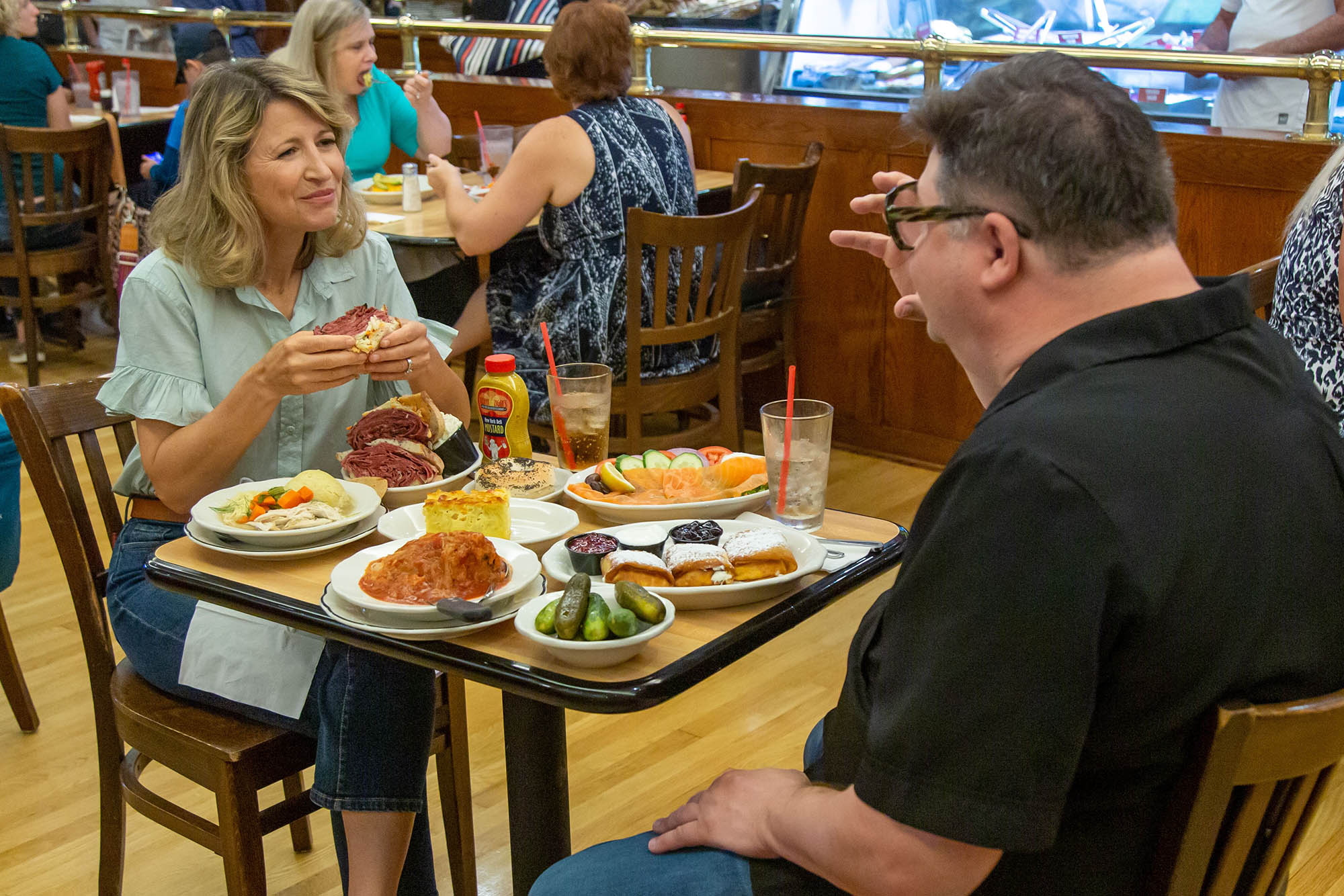 You know what they say – everything’s bigger in Texas! And that goes for Kenny & Ziggy’s, an eatery that takes the classic Jewish deli and gives it a giant Texan twist. Co-founder, Ziggy, has one mission with his restaurant and that’s to make sure no one leaves hungry. I can confirm, that he lives up to that promise and then some. Try the blintzes when you go. They’re made fresh in-house daily and Ziggy has spent 25 years perfecting them. 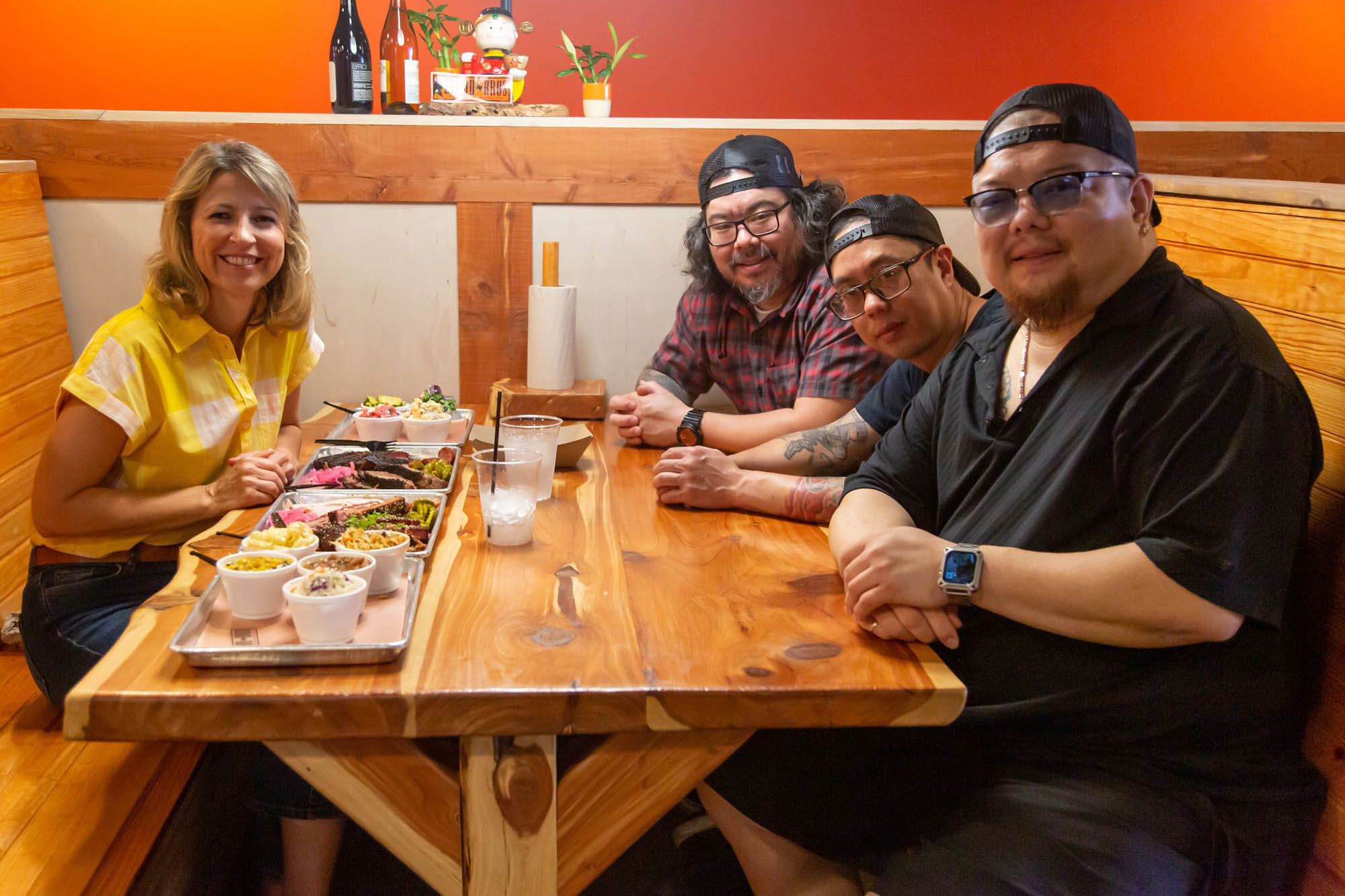 One of the most respected BBQ joints in Houston, the Asian-American-owned Blood Bros BBQ is a must-visit for meat lovers. The menu is the perfect fusion of classic BBQ dishes with Asian twists. Trust me when I say you’re going to want your extra stretchy eatin’ pants for this dinner.

Want to have the world at your fingertips? Head over to Phoenicia Specialty Foods. They carry over 15,000 products from over 50 countries. What started as a tiny Mediterranean-style deli in 1983 quickly morphed into a specialty food store when customers began seeking out hard-to-find ingredients that Bob and Arpi Tcholakian were managing to import. They still have their deli today as well as a bakery, which makes them the perfect spot to pick up picnic and snack supplies for your weekend in Houston.

If you’re looking for authentic Mexican cuisine in Houston, reserve a table at Hugo’s, run by and named after James Beard Award-winning chef Hugo Ortega. With his namesake restaurant, Ortega offers dishes and drinks from all over Mexico, introducing diners to the various regions and cuisines of his homeland. If there’s one drink you get with your meal, make it the Hugo-rita, a delicious tequila, Triple Sec, agave, and lime creation.

Ever hear of the Commander’s Palace in New Orleans? Well, did you know it has a sister establishment in Houston? Yup, that’s Brennan’s! This restaurant first opened back in 1967 and has made a name for itself in the city’s dining scene for its exceptional Creole cuisine and fun, unpretentious staff. For a really special weekend, reserve a spot at their Creole Jazz Brunch!

Where to Grab a Drink in Houston

Looking for a bar that’s got a big side of sustainability? Grab a drink at the White Rhino Patio & Cocktail Bar. Every single aspect that goes into running this business has a theme of eco-friendliness to it. Even the very building is painted with special paint that can filter the air! And the water? It comes from that famous Texan humidity (by way of a reverse osmosis water generator, of course). Enjoy a delicious cocktail and know you’re quite literally leaving no waste behind. 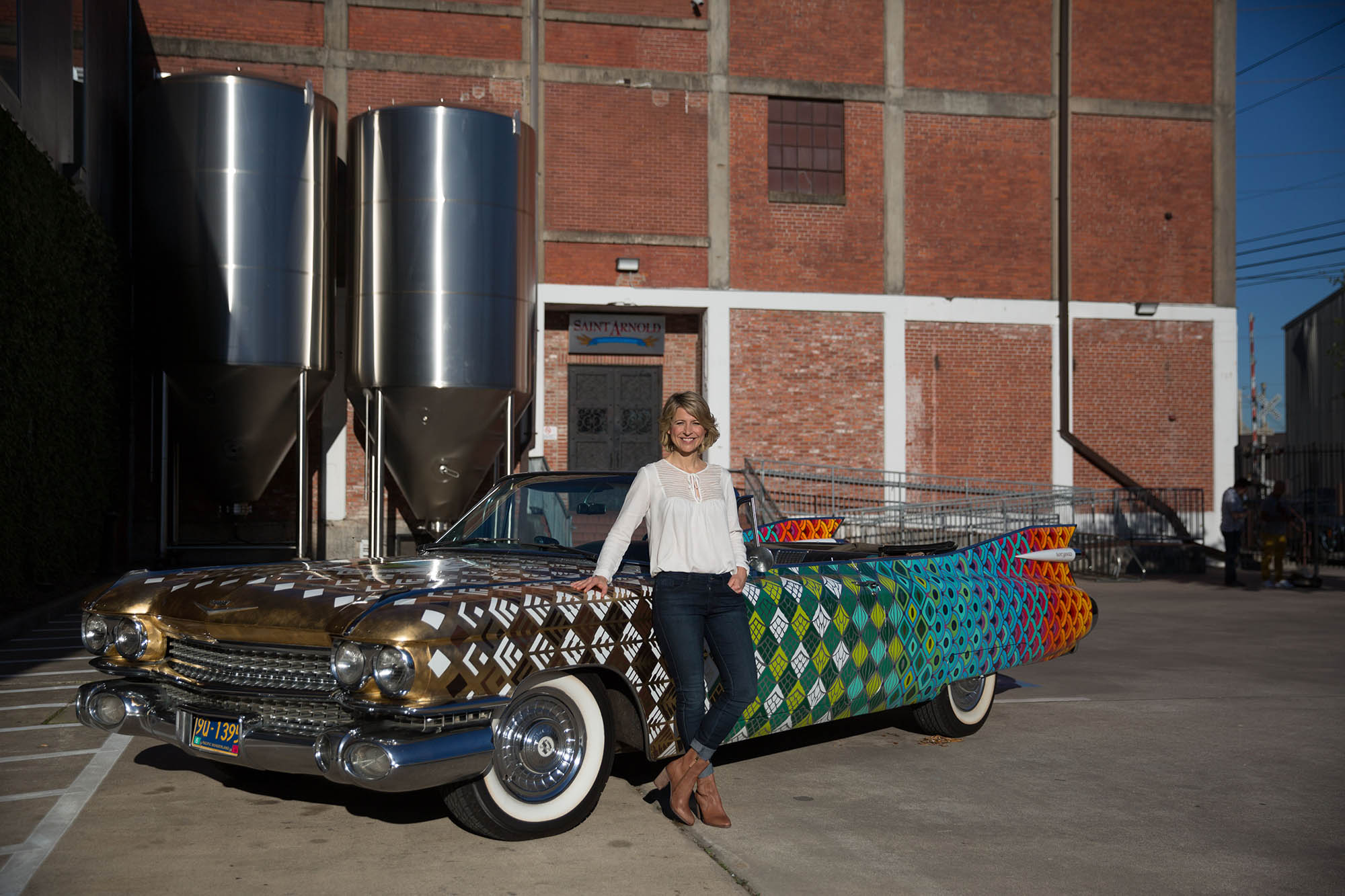 Saint Arnold Brewing Company is the oldest craft brewery in Texas, having started back in 1994. They keep their crew small and infuse each of their brews with soul. While they do offer some flavors year-round, they also mix it up with seasonal and special releases as well. For those curious about their process, you can book a tour every afternoon or you can just pop on into their onsite beer garden & restaurant.

And there you have it – some ideas to have a wonderful weekend in Houston! You can see just from this list how many ways you can spend a few days here! Whether you want history, the outdoors, good, ole Southern food, or incredible international cuisine, Houston is almost guaranteed to be a trip to remember! 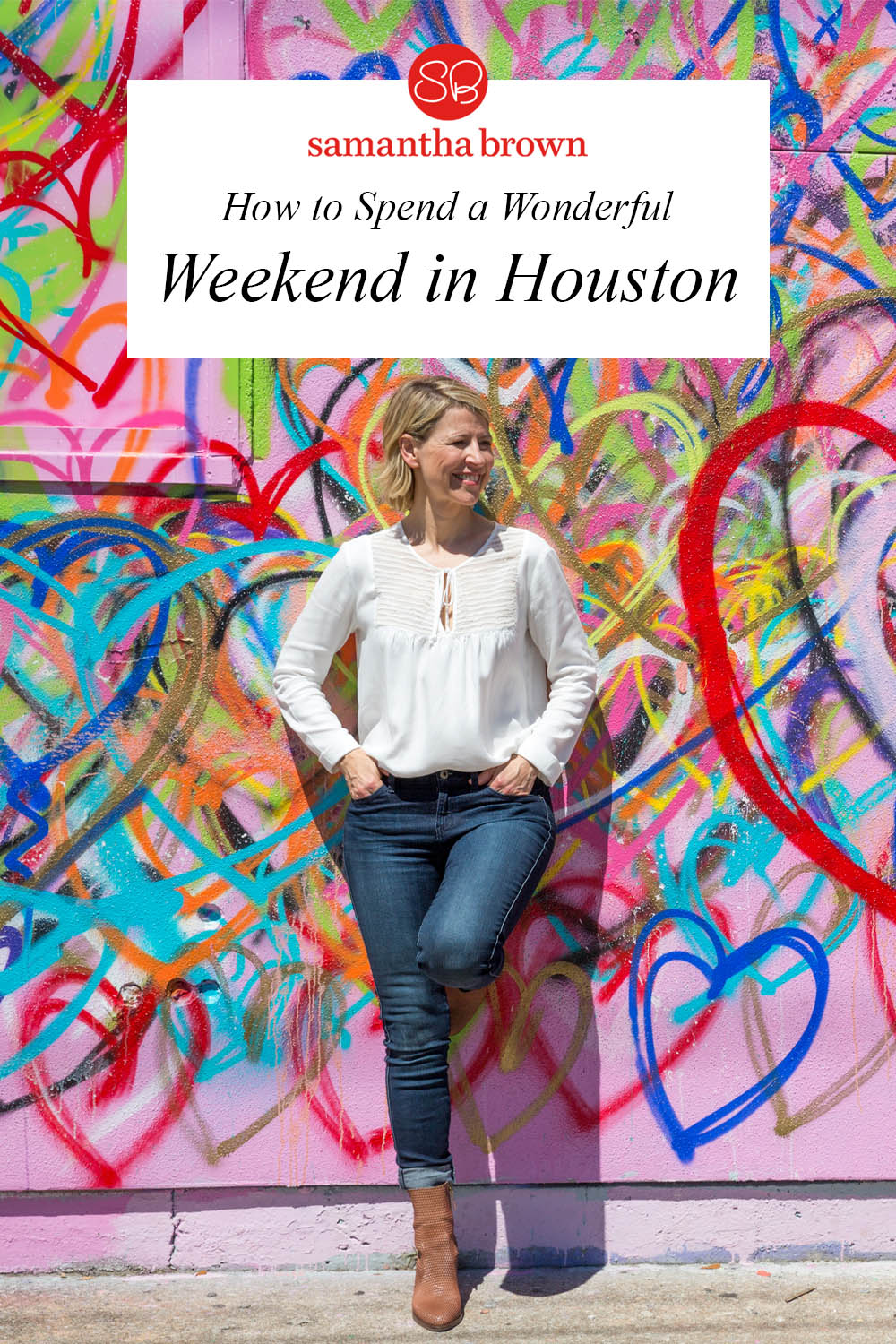 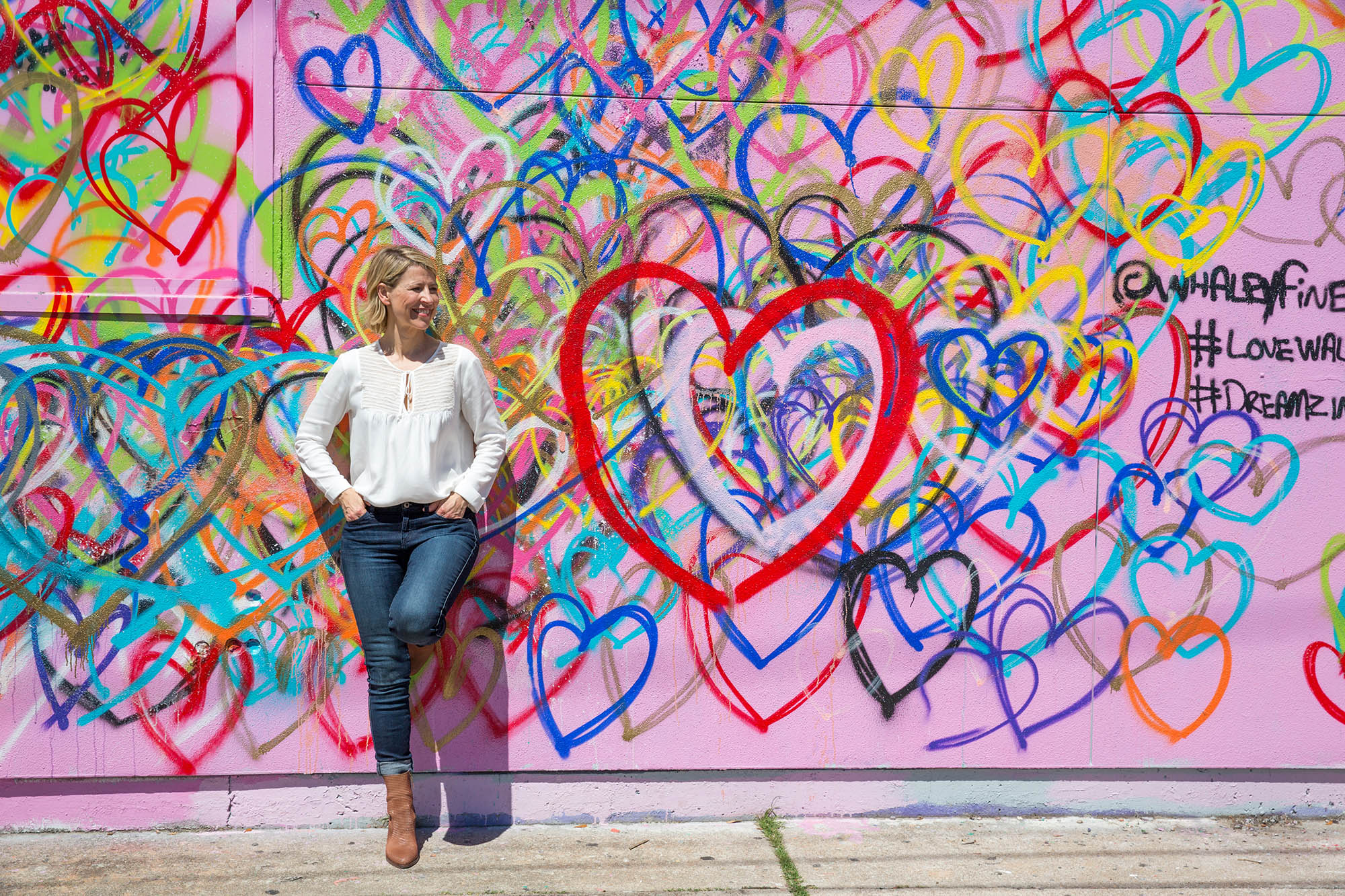