We kicked off Places to Love in Houston, Texas, and there were just so many reasons to return. On my last visit, I fell for its urban energy that inspires a tight-knit community that everyone is invited to.  It’s a place where food, always a hot topic of conversation, comes in so many languages. And a place where a more historical discussion is just getting started. I’m back in Houston, Texas for another episode of Places to Love.

Houston is full of surprises, one of the most notable has to be the BAPS Shri Swaminarayan Mandir. This impressive Hindu temple is the first of its kind in North America—consisting of a 11,500-square-foot open-air temple and a 25,620-square-foot surrounding deck. The temple materials were carved out of Italian marble and Turkish limestone by 3,000 craftsmen in various parts of India. The pieces were shipped to Houston, and construction began in March 2002. The grounds expand over 33 acres. You don’t have to practice Hinduism to really appreciate the beauty and peacefulness.

Be sure to check out the Understanding Hinduism exhibition, which gives people an insight into the religion.

Texas is pretty flat, but if you’re looking for some elevation, look no further than Kenny and Ziggy’s Delicatessen. Their pastrami sandwiches are so tall, you’ll be tempted to eat them with a knife and fork !. New York native Ziggy Gruber moved to Houston 20 years ago, continuing his family’s legacy. In the early 1900s, Max Gruber (Ziggy’s grandfather) left Budapest, Hungary for the United States. In 1927, he opened The Rialto Deli, the first Jewish Deli on New York’s Broadway. Ziggy is now the third generation to own and operate a Jewish Deli. They’re known for sky-scraping sandwiches, crunchy pickles, fluffy matzo balls and more.

Order the blintzes, which are made fresh, in-house daily. Ziggy spent 25 years perfecting the recipe. Topped with a little sour cream and blueberry sauce , he certainly has done it.

For decades Houston has been associated with the US space program, with Space Center Houston a major draw. This massive complex features more than 400 space artifacts, exhibits and interactive experiences. Here you can explore the exciting future and remarkable past of America’s human space-flight program. I had the great pleasure of exploring the center with  one of its pioneers, Dr Anna Lee Fisher. She’s been at NASA for 37 years, and in 1984, she became the first mom to fly in space.

At Space Center Houston there are all kinds of spacecraft to imagine yourself as an astronaut – including a prototype for a new generation of exploration vehicles for the moon, or Mars.

Freedmen’s Town is already designated a National Historic Site, however, it recently became Houston’s first Heritage District. The neighborhood began in 1865 as the destination for former enslaved people from surrounding plantations in Texas and Louisiana after the Civil War. These new residents established their own community, businesses and religious institutions. I met with Zion Escobar, the Executive Director of Houston’s Freedman’s Town Conservancy, to learn about the historic significance of this area—it’s about what happened the day after Juneteenth. From the brick paved roads that discretely conveyed messages to newcomers, to supportive churches and businesses, the Conservancy’s mission is to preserve the historic legacy of this neighborhood.

Freedmen’s Town quickly developed as a cultural center, notably with the establishment of Antioch Missionary Baptist Church in 1866. This was just seven months after the abolition of slavery was announced in Galveston, Texas on June 19, 1865, known as Juneteenth. The church was founded by Reverend John Henry “Jack” Yates. Born to enslaved parents in Virginia, he inspired newly freed slaves to invest in themselves and achieve true independence. The current building was erected in 1875, and It’s the only remaining piece of the original Fourth Ward east of Interstate 45. The church, located in the center of Freedman’s Town, was the first brick structure in Houston to be built and owned by African Americans.  At the center of activity for the African-American community, Antioch provided former slaves with opportunities to learn not only about God, but its ministries also helped them develop educationally, economically and socially.

The original pews, made by hand by former slaves, are still used. In 2019, it became a UNESCO Slave Route Project site.

Robin Wong, Terry Wong and Quy Hoang run one of the most popular and respected barbecue joints in town… even though they really never wanted to run a restaurant. The trio (two brothers and their best buddy) loved hosting casual backyard BBQs with friends. Eventually, they started doing pop-ups. After eight years, people kept asking if they were ever opening a restaurant. Enter Blood Bros. BBQ. They specialize in the Texas Holy Trinity: Brisket, ribs, and sausage. But once the Blood Bros. had established their Texas barbecue bonafides, they felt comfortable with expanding the possibilities—things like ribs with Korean gojujang sauce, brisket steamed buns, fried rice served with the charred ends of brisket and kimchi.

Blood Bros. BBQ made the New York Time’s list of most exciting American restaurants in 2021.

In the East End of Houston, there’s a brand new bar with a very innovative mission. At White Rhino, sustainability is part of the design—quite literally. Thirsty? They have a system that converts Houston’s infamous humidity into heavily filtered drinking water. The paint? Yeah, it’s basically alive. The Airlite paint on both the interior and exterior actually filters the air. They also have an onsite glass bottle pulverizer that turns bottles into sand, which can be used for sandbagging during hurricanes. On top of that, they serve up great cocktails, too. This is a green future I can get behind!

A portion of the sales goes towards the endangered white rhino. Donations go to conservation organizations that track, tag, and monitor white rhino populations.

On my last trip to Houston, I met up with Kam Franklin, lead singer of the iconic Houston band The Suffers. On this trip, she helped me time travel allll the way back to the 80s. Kam and I met up with Brandi Myasia, founder of Daisies and Pancakes, a local skate shop. Brandi custom-makes roller skates from your shoes of choice. You read that right: sneaker roller skates. Since I was ten, I’ve always wanted my own pair, and Brandi made that dream a reality. After trying on my new skates, we jointed up with the skating group the Luminous Nightcrawlers to skate, show off and blow off steam. I forgot how much fun skating is. Though I hadn’t skated in 38 years, I was instantly transported back to my days at the rink. It’s like mental health on wheels. 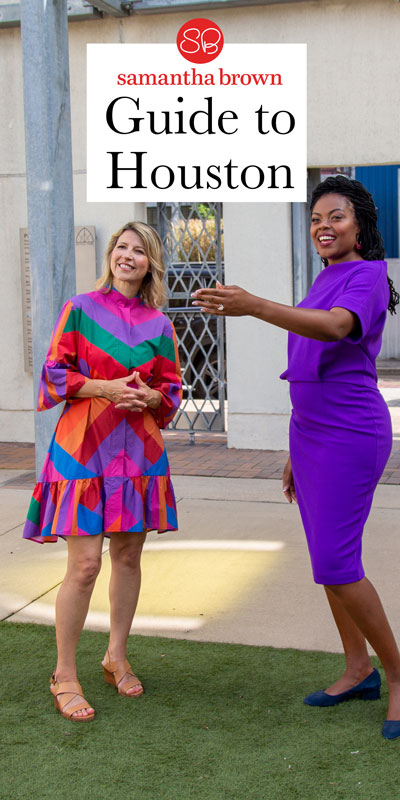