When it comes to historic places to visit in the U.S.A., plenty of patriotic places spring to mind. While our history may be young compared to our European, African, and Asian counterparts, what we lack in years, we make up for in passion.

There are many major cities and places that played a role in forming our country and government as we know it today. Though there are so many more wonderful places we can add, this list is a great way to start exploring some of the most historic places to visit in the U.S.A.

Historic Places to Visit in the U.S.A.

You can’t have a list of historic places to visit in the U.S.A. and not start with Philadelphia. After all, the war for independence may have begun in Boston, but the City of Brotherly Love was the center of everything. As Robert Morris said, “Philadelphia [is]… to the United States what the heart is to the human body…” From the First and Second Continental Congress to the signing of the Declaration of Independence, and the temporary capital of the U.S.,  there’s so much history in this one city!

When you visit, be sure to grab a map from the Visitor’s Center and explore what’s known as Philadelphia’s Historic District. Start with a visit to the Museum of the American Revolution to get a nice overview of the war and then walk to all the places that played a significant role in making the U.S. what it is today.

While there, don’t forget to place a penny on Ben Franklin’s grave for good luck and stroll along Elfreth’s Alley, the oldest continuously inhabited street in the country.

As I said above, Boston is definitely the birthplace of the American Revolution. This is where the seeds of rebellion were sowed and many of the most famous founding fathers often gathered and plotted against Great Britain’s increasingly oppressive taxation.

Some of the most famous events of the war happened here with both the Boston Massacre and the Boston Tea Party. The former occurred in 1770 and is often cited as the spark that began the revolution and the latter is easily the most memorable event for its curious name alone. Not at all a tea party, it describes a protest in 1773 that had colonists dumping 342 chests of tea into the Boston Harbor (worth something like $1 million USD). Back during my school days, they used to tell us that so much tea was dumped into the water you could still find some!

When visiting Boston for historical landmarks, your best bet is to follow what’s known as The Freedom Trail. This 2.5-mile trail leads you through historic Boston and towards 16 significant landmarks. You can walk it yourself or book a tour with some delightfully costumed and knowledgeable guides.

And if you even suspect you have any ties to those who fought in the Revolution, stop by New England Historic Genealogical Society to see if you can put your family tree together. It’s one of the largest of its kind, so if anyone can tell you if you’re related to George Washington or Alexander Hamilton, it’s them.

The actual beginning of the American Revolution occurred on April 19, 1775, at Lexington and Concord, about 30 minutes from Boston. At the start of the battle, it was about 700 British troops against 77 militiamen, also known as minute men. A “shot heard round the world” rang out (from which side, no one knows), and the first battle of the revolution began.

Soon minute men, so named because they could be ready to find at a minute’s notice, were springing to action as the British began searching Concord for arms. When the dust cleared, the minute men only lost about 90 men, sparking confidence that they truly could stand up to the British army.

Today, the Battles of Lexington and Concord are memorialized at Minute Man National Historical Park. Check out the exhibits at the Visitor Center and watch the roughly 30-minute multimedia presentation called “The Road to Revolution.” Once you’re finished, grab a map and explore the park. If you’re up for it, follow The Battle Road Trail. It’s a five-mile path that connects Concord and Lexington and allows you to walk in the minute men’s footsteps! 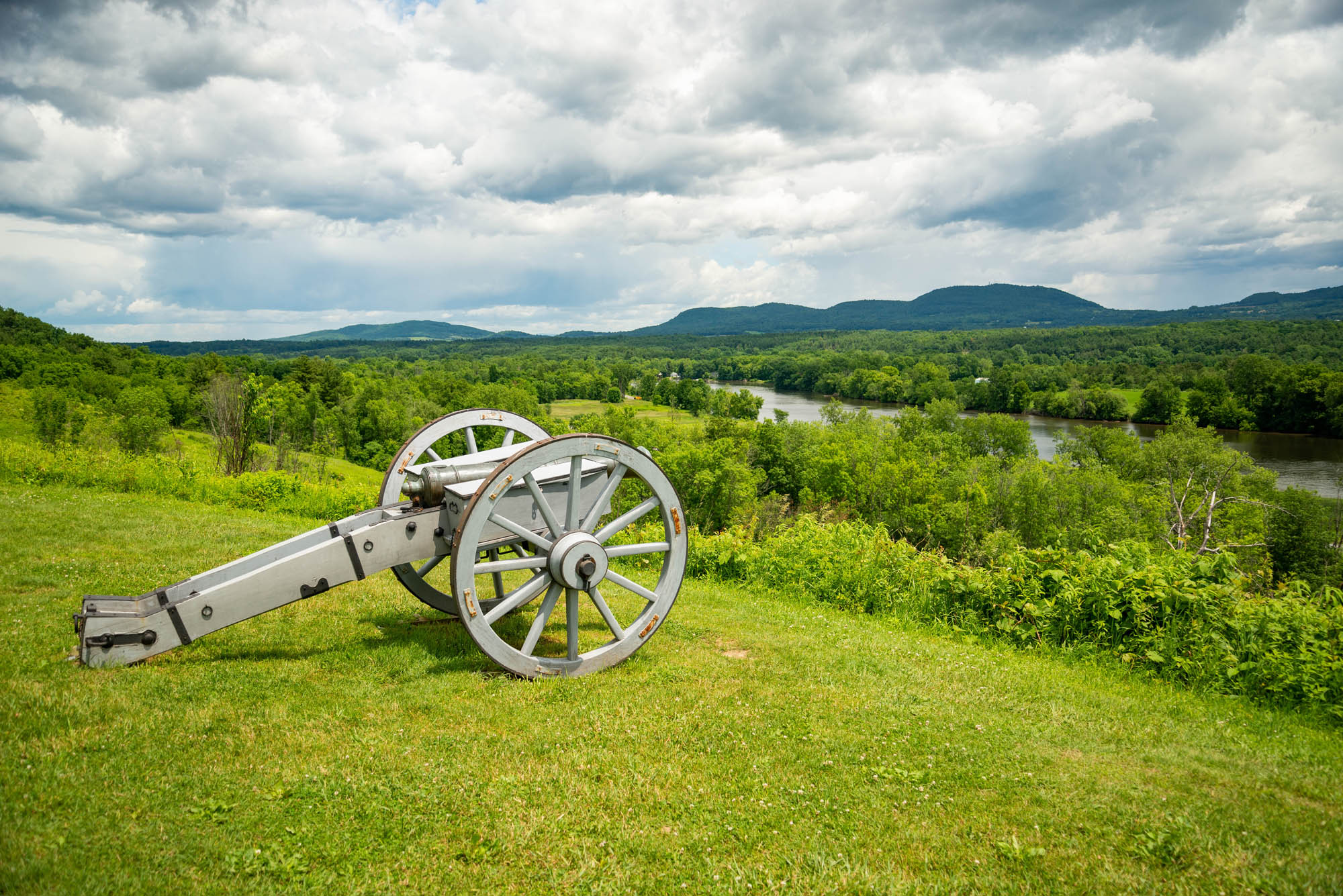 Every major war has its turning point, and the American Revolution’s came at the Battles of Saratoga in 1777. The first occurred on September 19th and the second on October 7th. By the end, the revolutionaries had won a decisive victory. The Brits had lost around a thousand men including some key leaders and surrendered only ten days later. Not only did this boost the war effort and prove to colonists they could win against one of the best armies in the world, but it also instilled enough confidence in the French to join our side in an alliance.

To visit the sites of the battles, head over to Saratoga National Historical Park. Check out the Visitor Center to first see an orientation film and then grab a map for a self-guided tour around the park. 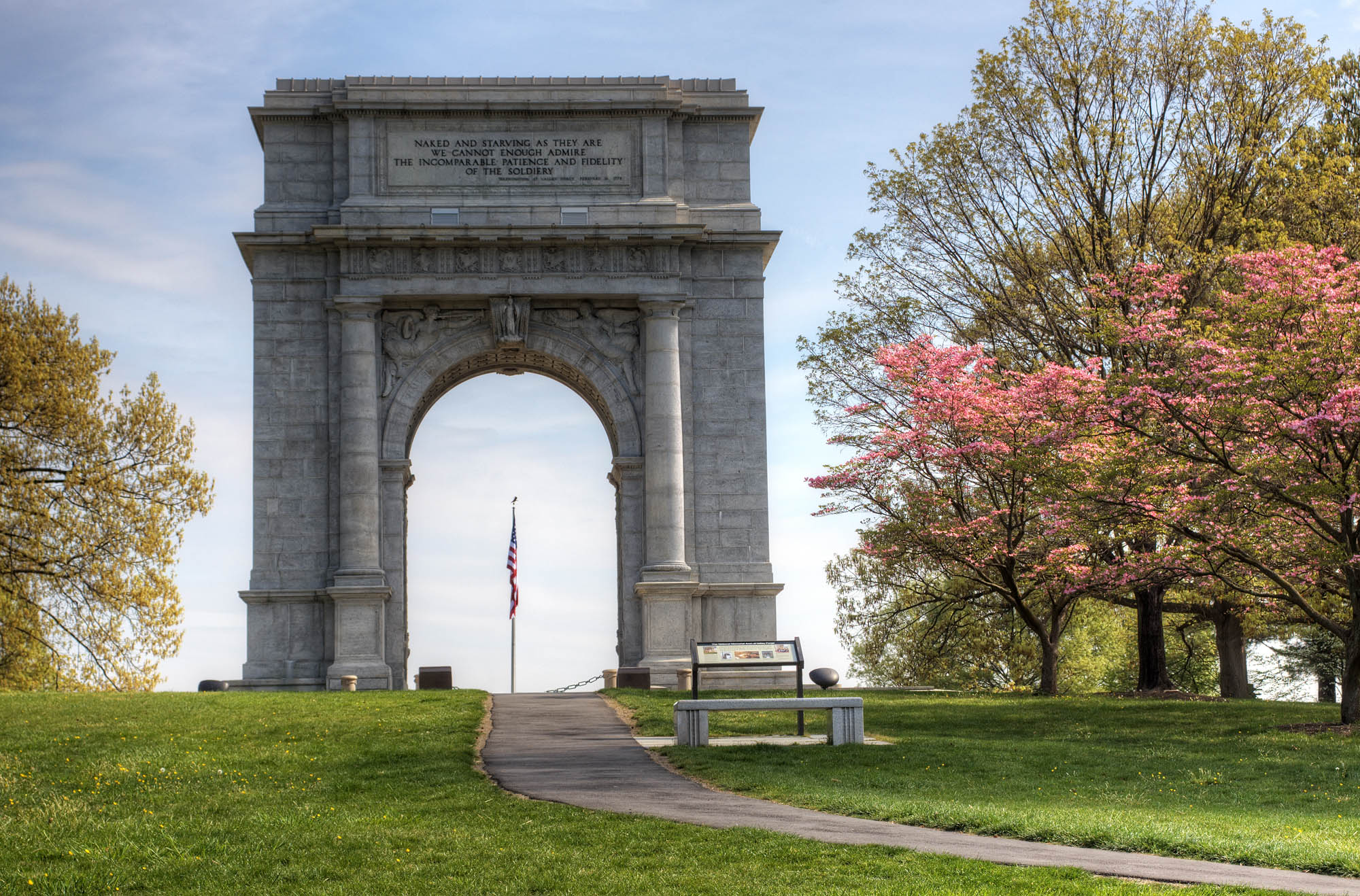 About 30 minutes from Philadelphia is one of the most significant parks related to the American Revolution. If Saratoga boosted Americans’ morale, Valley Forge tested their will to fight as well as their ability to survive.

Only months after their decisive win at the Battle of Saratoga, the Continental Army was forced to set up their winter encampment in what is now known as Valley Forge National Historical Park. With the British in control of Philadelphia and the new Congress had fled to York, the army had to find somewhere safe to settle in for the long winter ahead.

Conditions were some of the worst of the entire war with malnourishment, a lack of proper clothing, and even a lack of shoes. Despite the morale boost of the early autumn months, soldiers quickly found themselves sick and dying. However, just when things were at their lowest, Baron Friedrich von Steuben came over from Prussia and helped breathe new life into the army. By the time summer rolled in the next year, the British were gone from Philly and the French had officially joined the fight.

Today you can find a sprawling park with plenty of landmarks that pay homage to these soldiers’ bitter winter. The most popular thing to do is to pick up a map at the Visitor Center and follow the Encampment Tour – a 10-mile driving loop – and stop off to see key landmarks. Don’t skip Washington’s Headquarters if it’s open and at the very end you’ve got to try the soup at the Chapel Cabin Shop by the Washington Memorial Chapel. 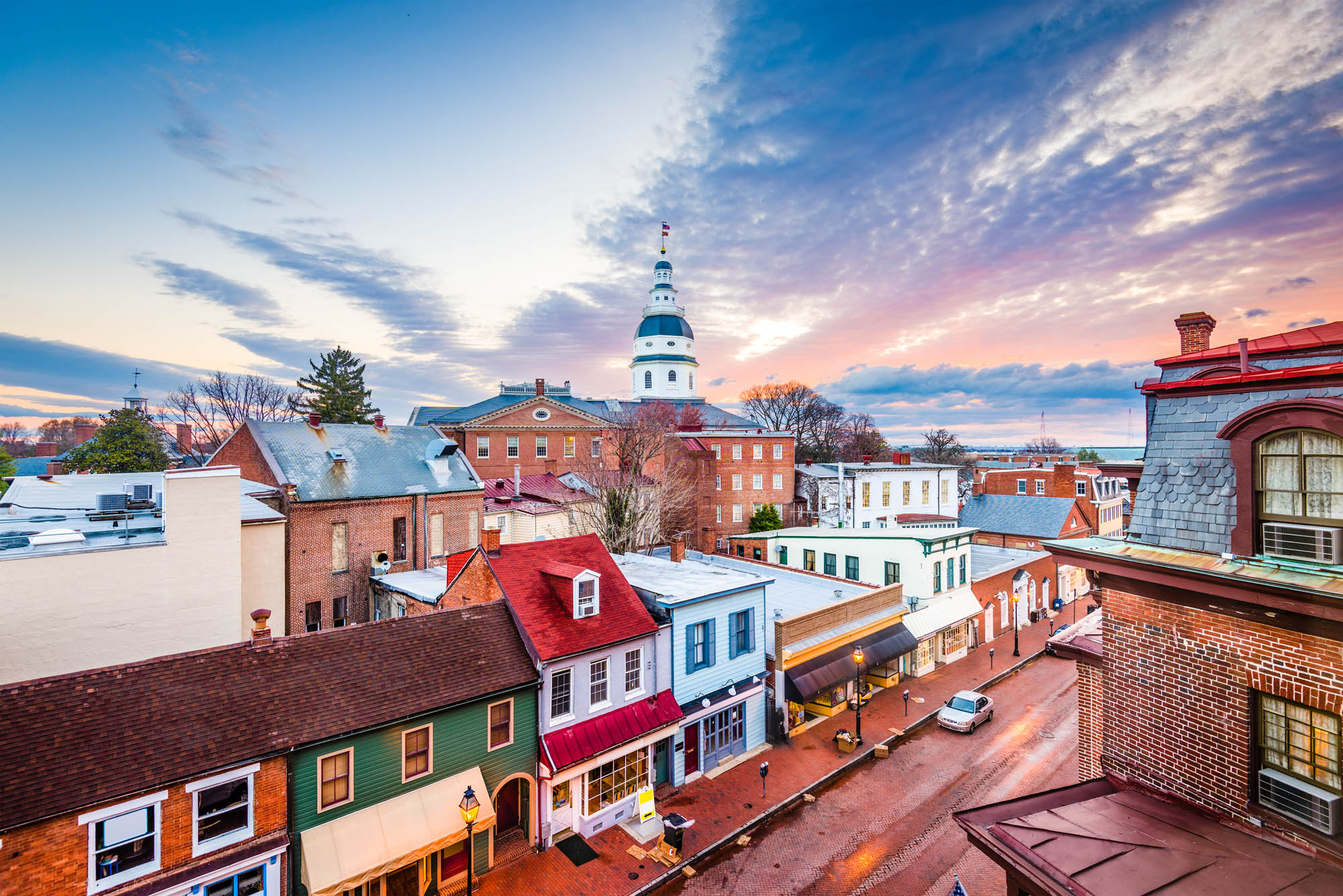 It’s hard to narrow down specific cities or places in Maryland that played a significant role in the revolution as the whole state collectively was extremely strong support for the more battle-hit colonies.

If you visit Baltimore, be sure to stop by Fort McHenry. It was built in 1776 to defend against the British and, more famously, is known as the site where Francis Scott Key wrote our national anthem during the War of 1812. Another must-see is Baltimore’s Washington Monument, which, yes, predates the famous D.C. version.

Over in Annapolis, citizens had their own tea party in 1774; and in 1784 at the Maryland State House, the Congress of the Confederation ratified the Treat of Paris. A little further away in the small town of Chestertown, Washington College became the first college chartered under American independence and had the General himself on their Board of Visitors and Governors.

To round up this list of historic places to visit in the U.S.A., I’ve got to end with our current capital, Washington D.C. Once the dust settled from the revolution and Congress began to form the government we know today, one important question remained. Where would we put our nation’s capital? Through a series of events, Congress passed the Residence Act in 1790, and then President Washington chose the location. For the next decade, while D.C. was under construction, Philadelphia served as the temporary capital.

Over two centuries later, Washington D.C. is still the main hub of anything and everything to do with the American government and is the top place for any history buff to visit. While it didn’t exist during the revolution that started the United States of America, it’s been central to all that’s happened since.

My best advice when it comes to visiting is to give yourself more than enough time to see everything and be prepared to walk. It feels as though every neighborhood, museum, and building has some sort of historical significance, and you’re going to want to see them all. The Smithsonian museums alone are going to keep you busy for quite a few afternoons. And, of course, if you plan on visiting in the spring, time your trip to see the famous cherry blossoms around Tidal Basin.

There you have it! Some of the historic places in the U.S.A. to visit if you want to appreciate just how this country of ours was formed. From cities to former battlefields and more, there’s so much to see to learn more about this country! 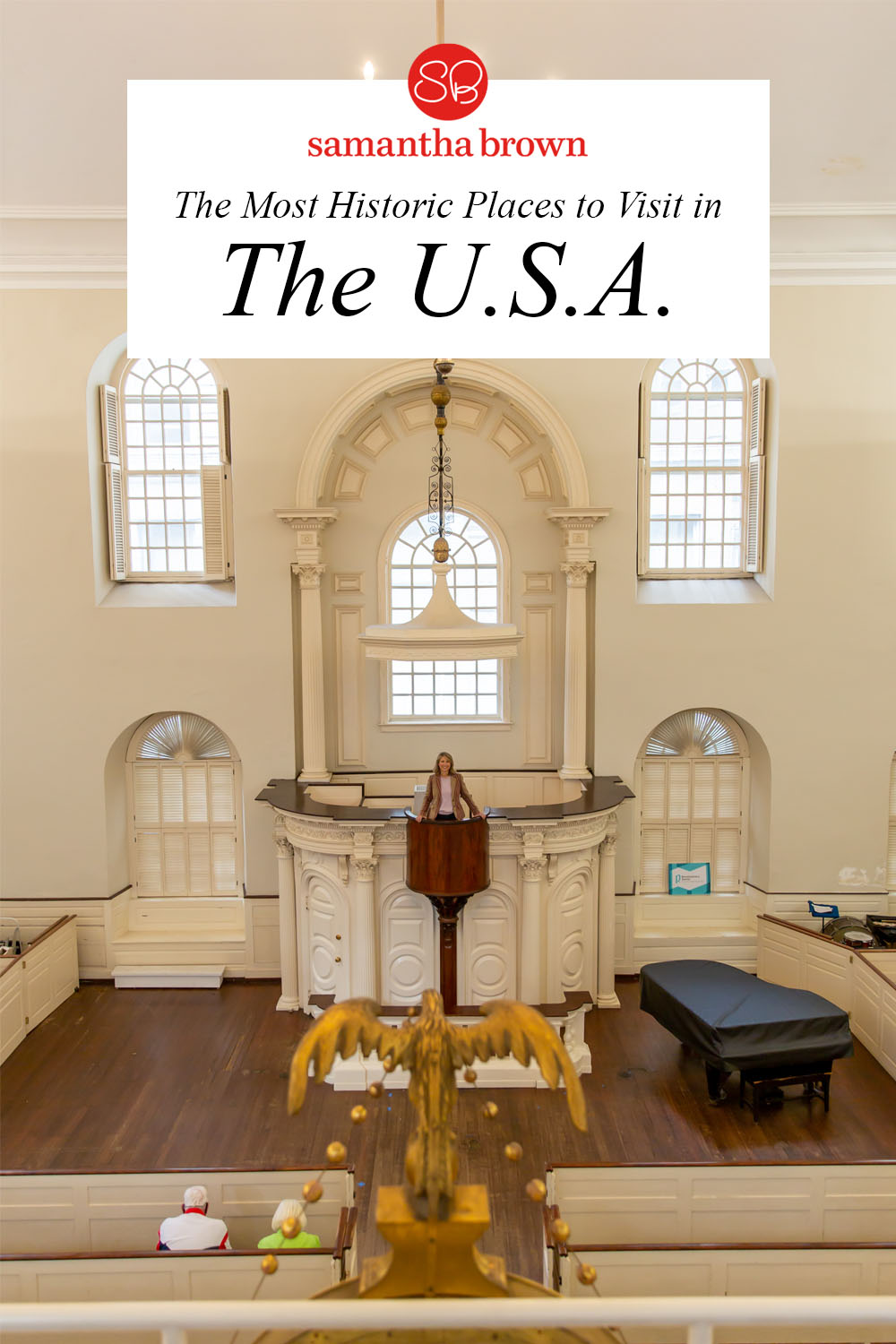 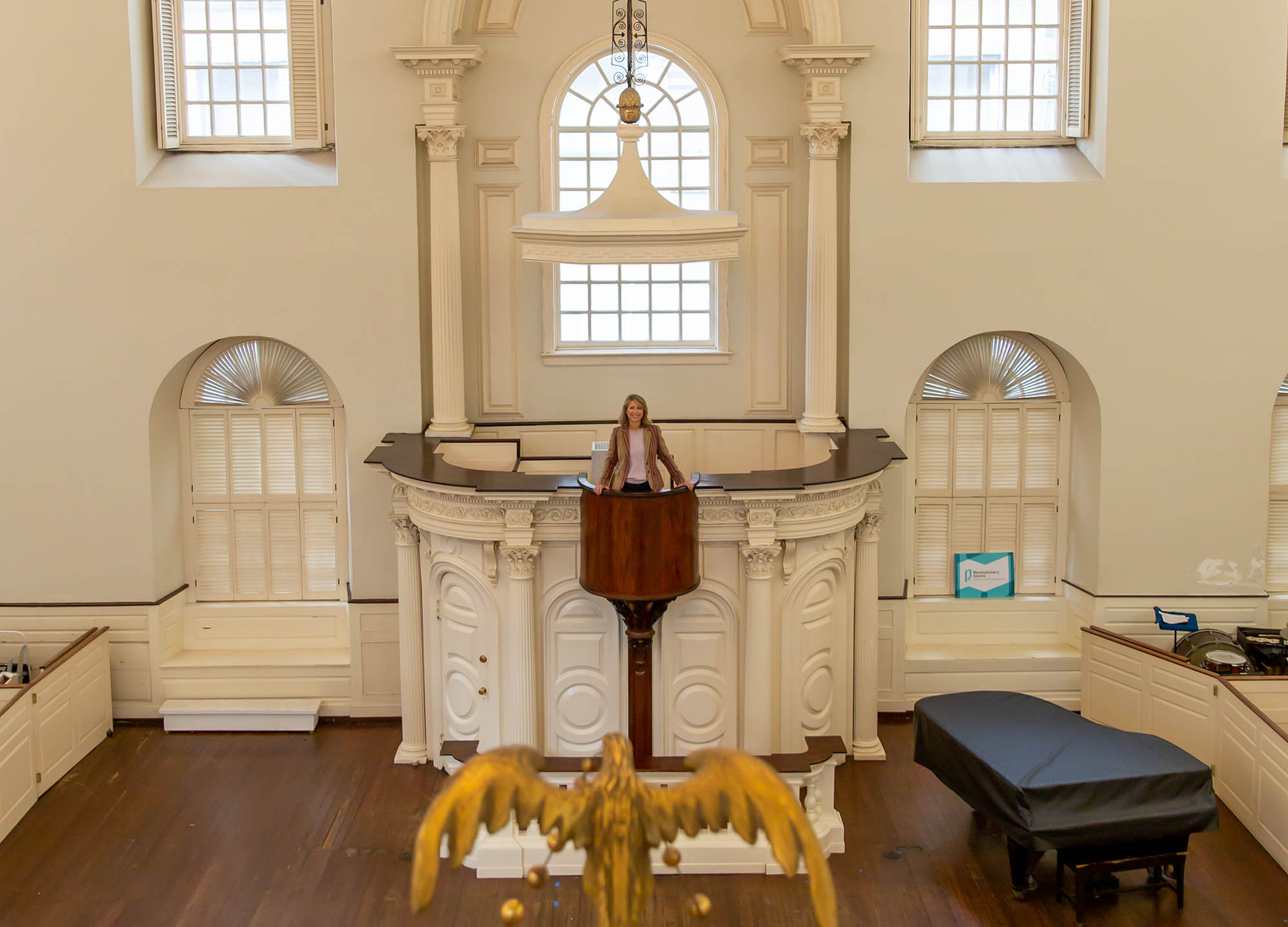