Bursting with American history and home to revolutionary ideas that can still be felt today, here are the most unique things to do in Boston, Massachusetts.

Located in the stunning New England region, Boston has held an important place in America’s story for centuries. Founded back in 1630 by Puritan settlers fleeing persecution in Great Britain, it’s one of the oldest municipalities in the country. As such, it’s home to a lot of firsts – first university, first public park, first public school… the list goes on.

However, what really cemented its place in the history books is the role it played during the American Revolution. Many of our founding fathers called this city home and are even buried here, and it saw some of the most significant events of the war. Remember learning about the Boston Massacre or a little event known as the Boston Tea party?

Today, you can tell Bostonians still take pride in their beautiful home. Even as they work to preserve some of the most important landmarks to the nation’s foundations, they work equally as hard to foster change and diversity with a youthful spirit that would make our founding fathers proud. Once you’ve seen all the major highlights, add these recommendations to your itinerary!

5 Unique Things to Do in Boston

1. Try Out Rowing on the Charles River 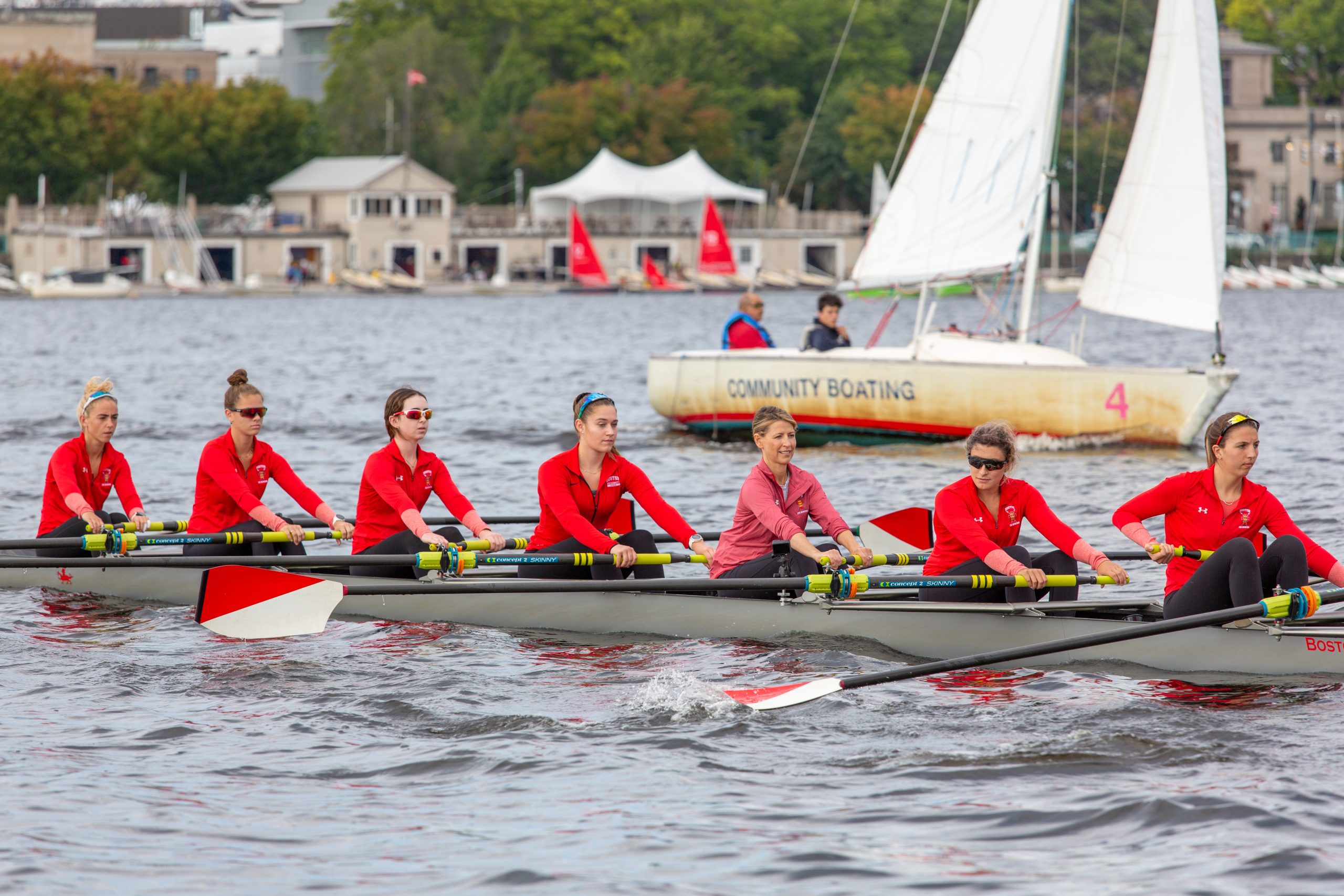 Boston makes up the end of the 80-mile-long Charles River before it leads out to Massachusetts Bay and the Atlantic Ocean. Because of this, it has a long history with watersports with everything from kayaking to sailing being popular in the warmer months.

Its most famous claim to fame, though? Rowing is sometimes known as crew. When you think of important sports landmarks, I’d argue Fenway Park, nearby Gillette Stadium, and the Charles River are all on pretty equal footing.

Unlike Fenway and Gillette, though, the Charles River isn’t home to just one crew team or boathouse but many. The most well-known, of course, are the teams from Boston University and Harvard University. It also hosts the world’s largest two-day rowing event for collegiate crew teams – the Head of the Charles Regatta.

Don’t worry, though. You don’t have to be a top collegiate athlete to try your hand at the oar of one of these boats. Learn with the Community Rowing Initiative, which has a mission of inclusivity for the sport.

One of the most unique things to do in Boston? Tracing your lineage as far back as you can go. The New England Historic Genealogical Society (NEHGS) first opened its doors in 1845 and is one of the largest and most respected genealogical societies in the world. Since then, it’s helped Americans from all backgrounds build their family trees with the goal of inspiring people to connect to their pasts and learn more about their histories.

With a library that occupies eight stories of their current location, the NEGHS is not just limited to early New England settlers. Beyond Europe, they can also assist with Atlantic and French Canadian, African American, Native American, Chinese, and Jewish genealogies.

When I visited, I met with Lindsay Fulton, who’s been a part of the society since 2012 and specializes in New England and New York research. She was able to trace my tree all the way back to my maternal eighth great grandfather and all the way back to 1672 on my father’s side! When I tell you I was absolutely shocked by the individuals I can now call distant cousins…

If you want to get started on your own family tree before visiting the NEHGS in person, you can create one for free on their website, AmericanAncestors.org. 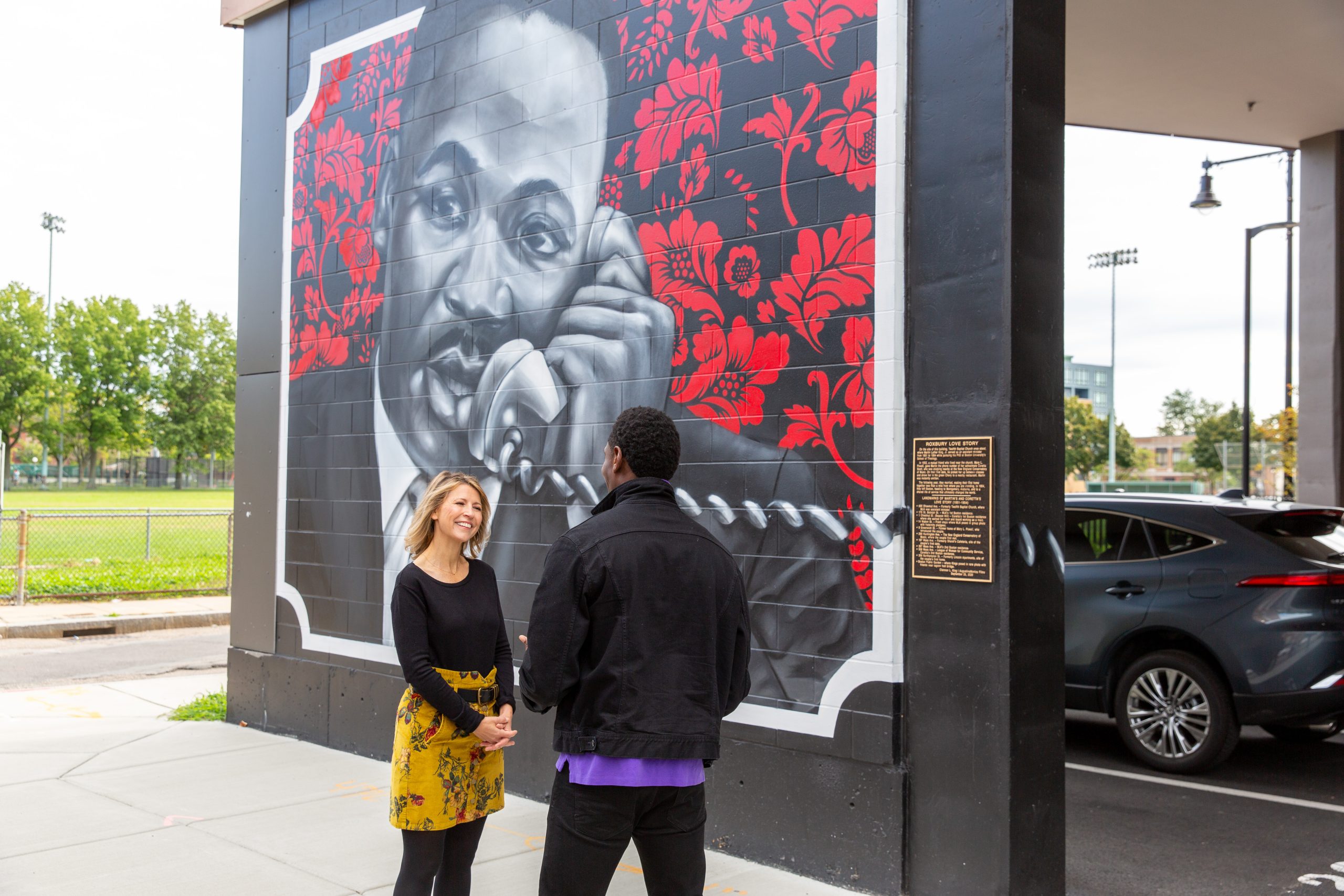 While you already know about Boston’s ties to the American Revolution and the founding of our nation as we know it, did you also know it has strong ties to the Civil Rights Movement?

To learn more about this, just head over to the neighborhood of Roxbury. Once a town, Roxbury is another municipality that pre-dates America itself as it was founded as part of the Massachusetts Bay Colony in 1630.

It’s been known as the “heart of Black culture in Boston” since the mid-twentieth century and has seen the likes of both Malcolm X and Martin Luther King Jr. during their respective formative years. For Malcolm X this meant his teen years while for M.L.K. it meant his college years where he fell in love with a certain music student by the name of Coretta Scott.

I highly recommend booking a tour with Live Like a Local to really learn about its history from guides who also call this place home. The company was founded by Collin Knight, a Roxbury native who is passionate about sharing the area’s rich history and culture. He’s designed the tours to really showcase Roxbury and take visitors to interesting places like Nubian Square, the main center of the neighborhood.

While there make sure to pop into Frugal Bookstore. As the only African-American-owned bookstore in Boston, it was also named the city’s best bookstore in 2020 and has spent the last ten years putting BIPOC authors front and center on their shelves.

4. Eat Your Way Through Little Italy 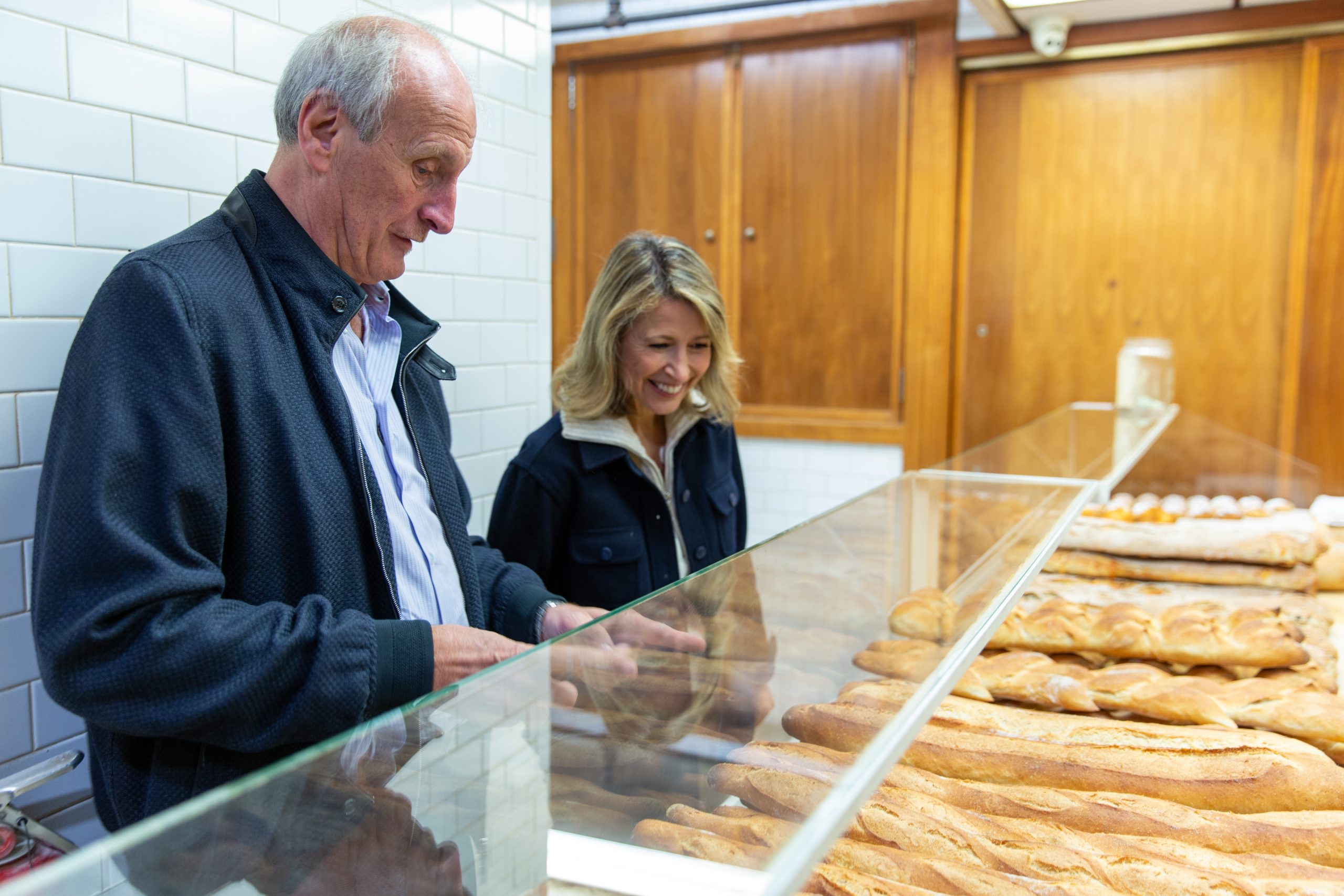 If there’s one word that’s practically synonymous with Italy, it has to be food! When it comes to spending time in Boston’s Little Italy, you absolutely must wear your loosest pants and come hungry. Of all of the city’s 23 neighborhoods, this is the one where you must be prepared to eat.

Also known as North End, Little Italy is the city’s oldest residential community and full of charm that’s both Italian and uniquely American. Wander the maze of narrow streets and alleyways to discover the numerous trattorias, salumerias, bakeries, and cafes full of authentic recipes brought over from Italy’s many gastronomically diverse regions.

If there’s one spot you do not want to miss, it has to be Bricco Salumeria & Pasta Shop. Founded by Frank DePasquale, Little Italy’s local “mayor,” the shop is a tribute to his childhood spent near the Amalfi Coast. It’s here you’ll find handmade pasta, like the kind his mother used to make, as well as all the best-imported meats, cheeses, olive oil, and more.

Pick up all you’d need to make an authentic Italian dinner or simply order a sandwich to go. I personally loved the Italian sandwich, which is expertly made with mortadella, Genoa salami, soppressata, and all sorts of delicious ingredients. You might just get lucky and see them making mozzarella fresh in the shop, and if you’re even luckier, you might just get to sample a piece.

While there, don’t miss out on the panetteria down below. Everything from ciabatta to baguettes are made fresh.

5. Dine at a Historic Spot 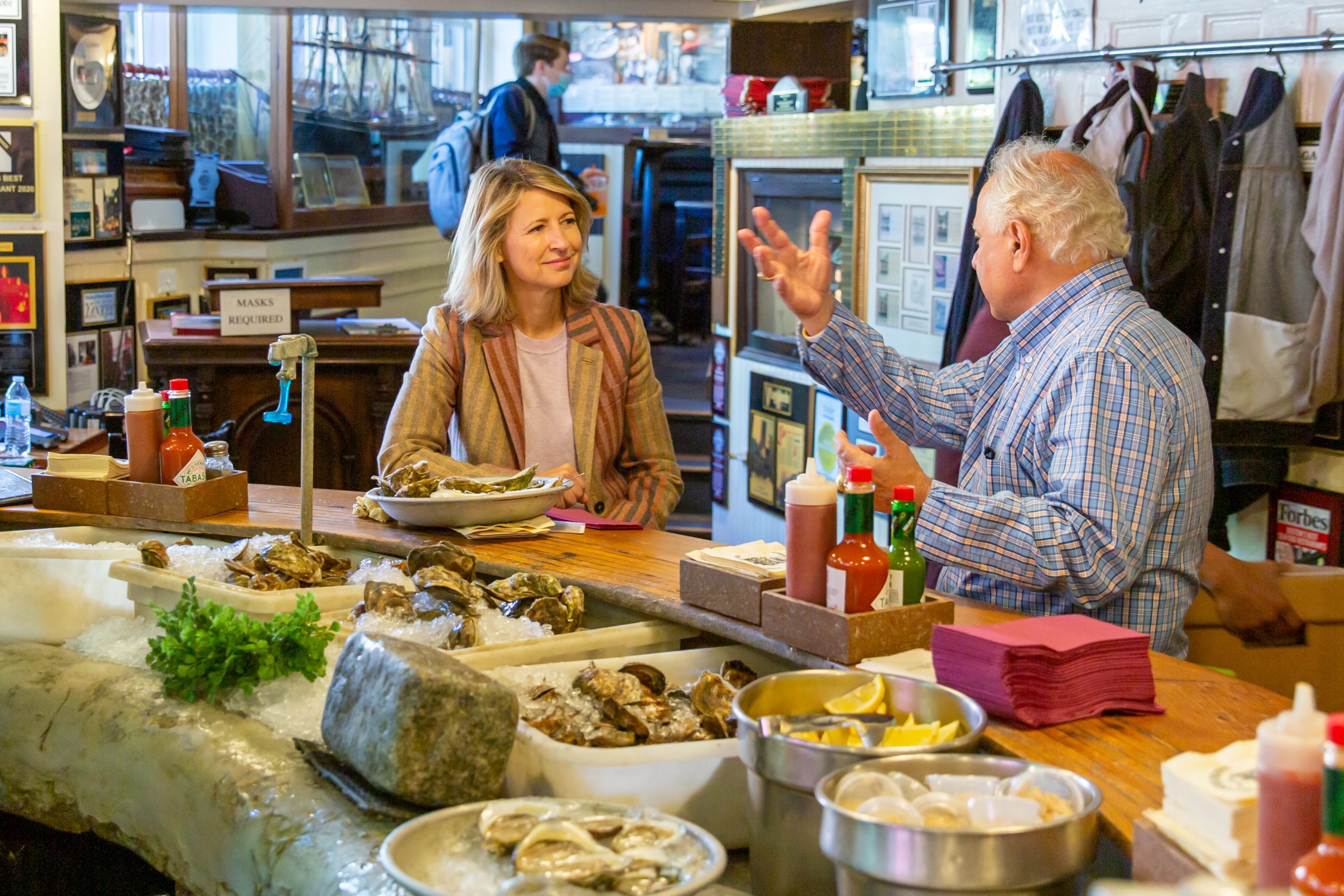 Hands down of all the best places to eat in Boston, Union Oyster House has to be one of the most famous and historic. Not only is it the oldest continuously operating restaurant in the United States, having opened its doors in 1826, but the building itself also predates the restaurant by at least a century, possibly even more.

Leading up to and during the Revolution, it was a key spot for the Continental Army and founding fathers. Isaiah Thomas printed copies of The Massachusetts Spy on the upper floor in 1771, planting and growing the seeds for independence. This is where Adams’, Hancock’s, and Quincy’s wives would mend clothes for soldiers, and where Ebenezer Hancock, the first paymaster for the army, placed his headquarters. Safe to say Washington himself spent a good deal of time getting to know the building too!

Later, after it became an oyster restaurant, it continued to see its fair share of American royalty in the form of iconic presidents and Hollywood stars. Think Franklin Roosevelt, Bill Clinton, Robin Williams, Meryl Streep, Paul Newman, and many, many more. The most famous, of course, has to be John F. Kennedy, a Bostonian native himself, who dined here every Sunday at noon. The booth he frequented is now known as the Kennedy Booth and is located upstairs.

Of course, the Union Oyster House doesn’t rest on laurels alone as seen when it was awarded the North American Best Landmark Restaurant in 2020 by the World Culinary Awards! While oyster is in the name and they’ve had almost two centuries to perfect the art of shucking, there are a slew of other delicious seafood dishes on the menu too. You really can’t go wrong here.

Where to Stay in Boston

Located in the heart of the city, book a stay at The Langham Boston. It’s situated in what was once the Federal Reserve Bank of Boston, giving it a mix of historic and modern sophistication. There are just over 300 gorgeous rooms designed with light, bright colors and all the deluxe amenities you could want.

From history to food to getting out on the Charles River, you can see just how easy it is to get beyond the classic highlights of Boston. This is a city bursting with centuries of American history, youthful energy that fosters change, and stories from all over eager to be shared. Being able to explore a community where locals are constantly creating revolutions of their own no matter the field is why I’ll always love visiting and re-visiting Boston.

If you want to see more unique things to do in Boston and what else we got up on our visit, check out our Boston episode of Season 5’s “Samantha Brown’s Places to Love”! 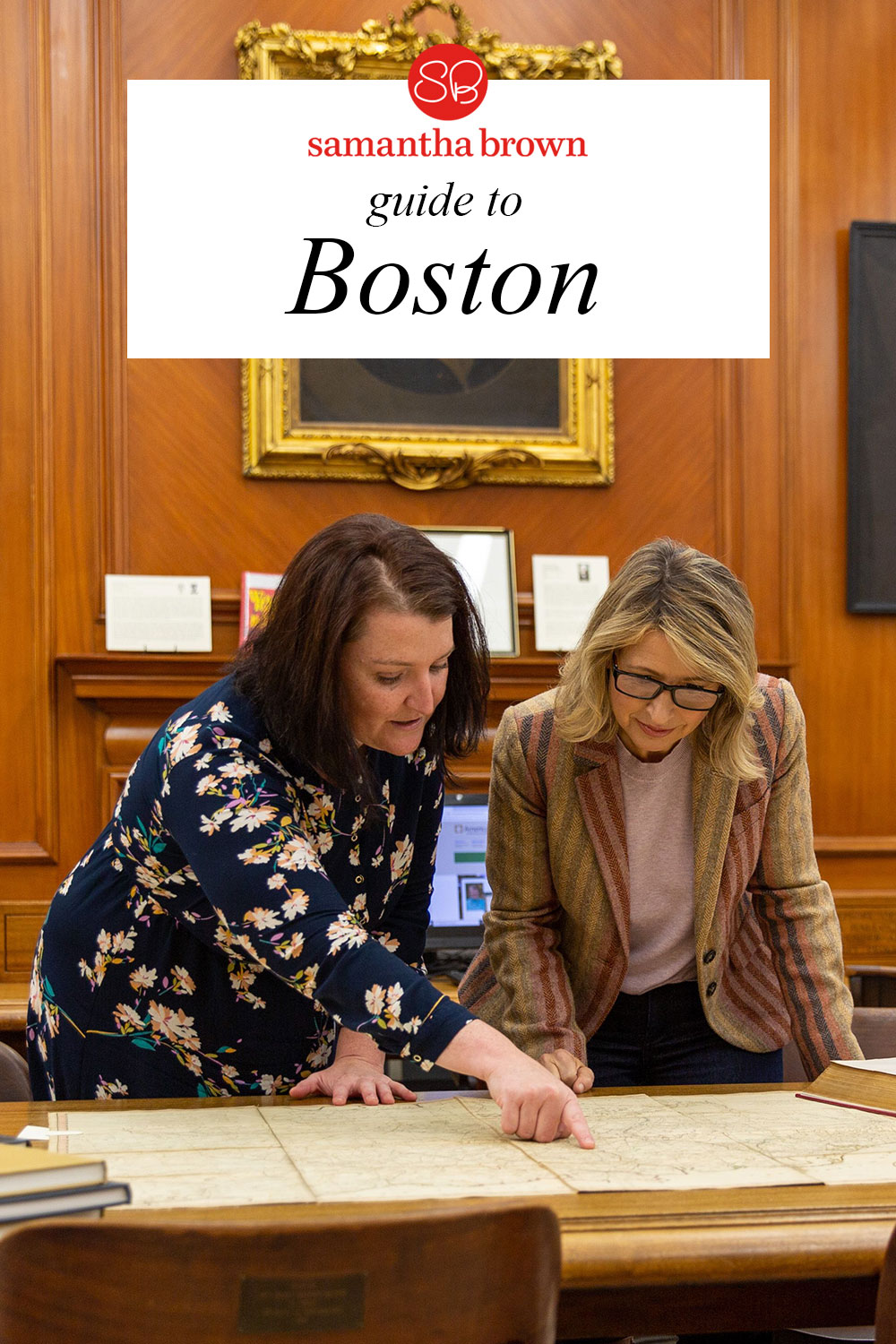 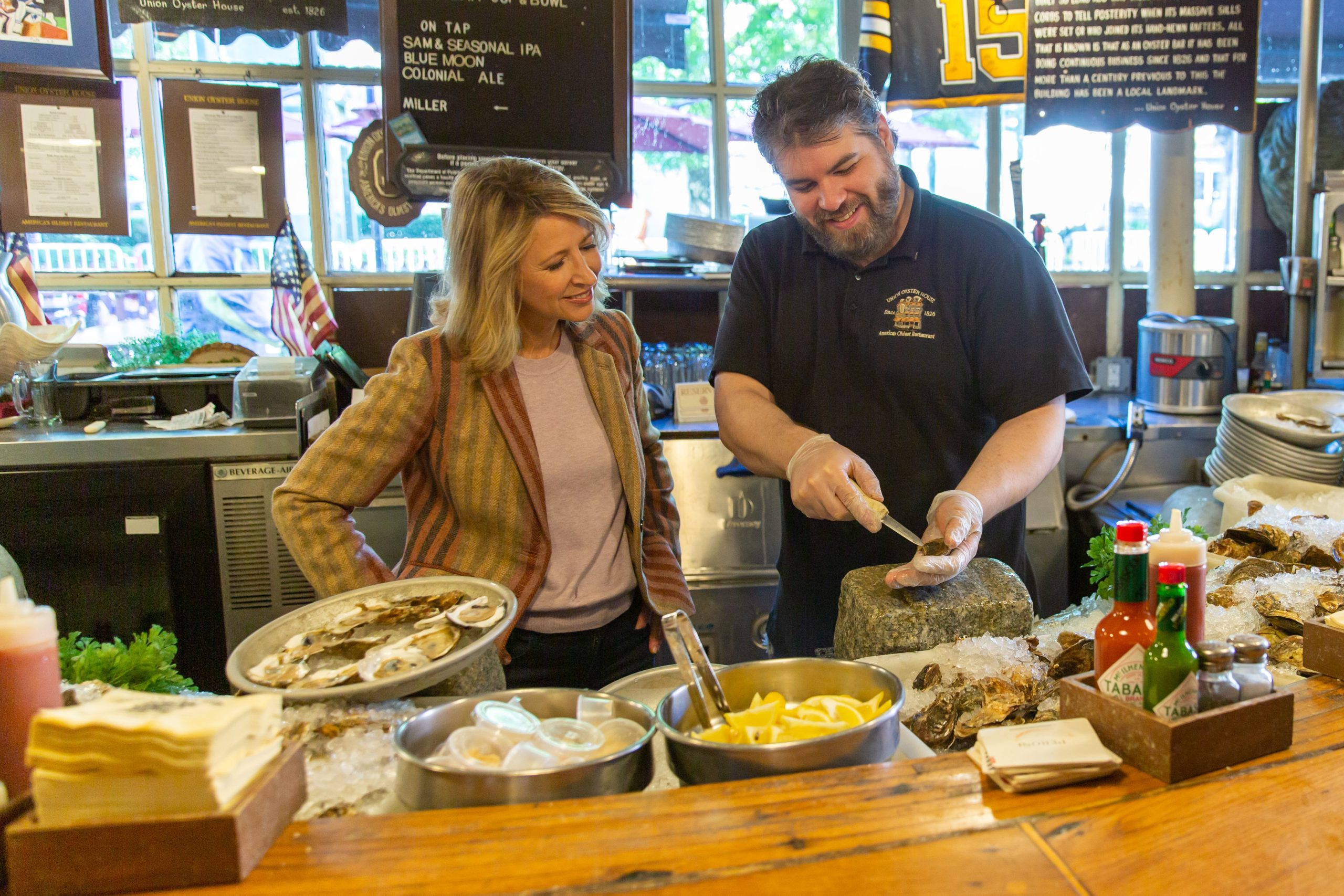