One of the best things about the Fourth of July holiday is taking a moment to celebrate the birthday of our country.  Yes, we all very concerned about going to the beach or hosting a fun barbecue but the reality is…everyone is feeling very patriotic.  Flags large and small are flying everywhere, kids in their best red, white and blue outfits are marching in neighborhood parades, and the biggest question is where you can go to get the best view of the fireworks.

It got me thinking, as a traveler, where would I go relive the birthplace of our country and to celebrate all it stands for?  While I haven’t hit all of them, here are some of the most patriotic places I can think of.  Add yours to the comments below.

Much of our identity and history as a nation is captured and celebrated throughout Washington D.C.  You could stay for weeks and not begin to scratch the surface.  Unless you’re a power-walker with tough feet, rent a bike and take your time.  Ride up and down the Mall to see the Capitol, National Archives and Memorials for Presidents Lincoln, Jefferson, Washington, FDR and Grant.  Pay your thanks to fallen soldiers at the WWII, Vietnam and Korean War Memorials before riding across the bridge to Arlington National Cemetery, the final resting place for more than 14,000 veterans. While you are there, be sure to see the changing of the guard ceremony at the Tomb of the Unknown Soldier. 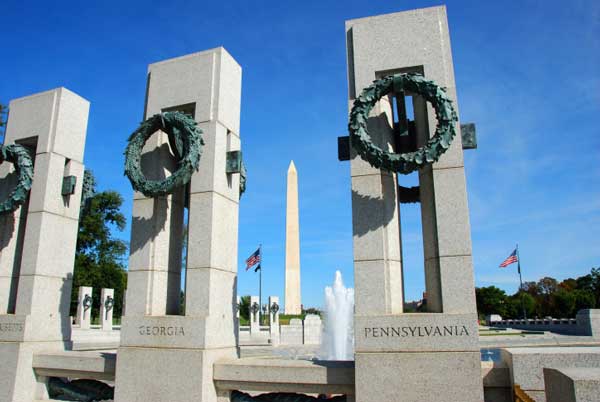 Take a step back to where it all began at Independence National Historic Park.  Visit Independence Hall, where the Declaration of Independence and the U.S. Constitution were signed. Take a tour and learn more about the Liberty Bell including the background story of its famous crack.  Celebrate the interesting life of Philadelphia’s most famous resident at Franklin Court and the Benjamin Franklin Museum.  Yes this is where it all began in 1776. 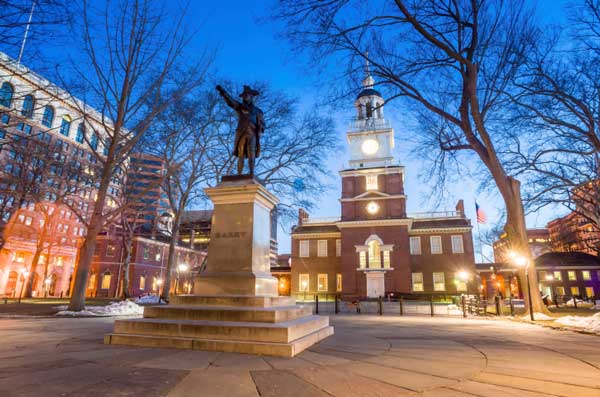 Probably the most iconic of all our Nation’s monuments is the Statue of Liberty.  French sculptor Frederic Bartholdi was asked to design a gift to commemorate the 1876 centennial of the American Declaration of Independence.  The enormous 111 foot copper statue was publicly dedicated in 1886 and has stood as symbol of freedom and democracy, as well as, international friendship since that day.  There are several ways to enjoy Lady Liberty, two of my favorite are the cruises to Liberty Island or (for free) the Staten Island Ferry.  If you stay at the Ritz-Carlton you can review a room with a view and a telescope.  Now that would be a great way to see the fireworks!  Or if you can’t go, try watching the fireworks via webcam. 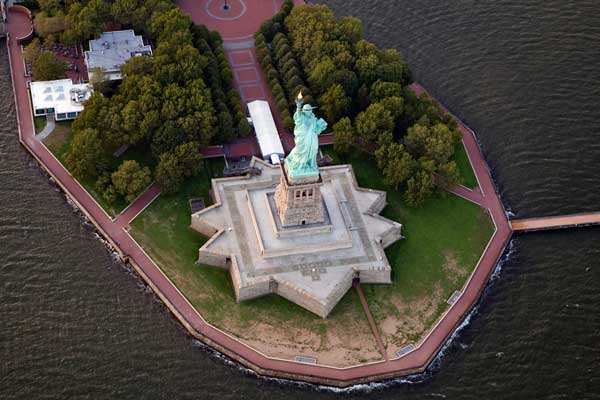 Like D.C., Boston has so much to offer, you’ll find your head spinning from all the sites to see.  To make life simple, start with the Freedom Trail which is a 2.5 mile path through 16 sites that played a role in the Revolutionary War.  Some of the most popular are the Paul Revere House, Old North Church, Old State House and Fanueil Hall Marketplace.  Head over to the Congress Street Bridge and experience the Boston Tea Party Museum.  Meet the colonists, explore the authentically restored ships and dump tea overboard just as the Sons of Liberty did on that fateful night of December 16, 1773. 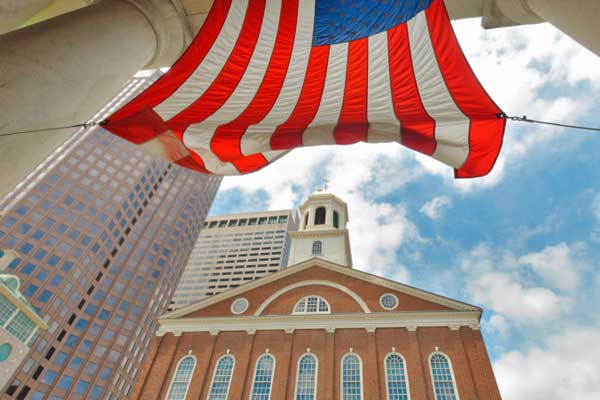 Other than Lady Liberty, this may be the most epic sculpture in all the land.  Carved into South Dakota’s Black Hills, the 60-foot faces of Presidents Washington, Jefferson, Roosevelt and Lincoln stand 500 feet high, looking over a majestic natural setting.   You’ll come to see Mount Rushmore but stay for the unique scenery and dozens of National Parks, monuments, memorials and caves in the Midwest.  Also nearby (17 miles) is the Crazy Horse Memorial. 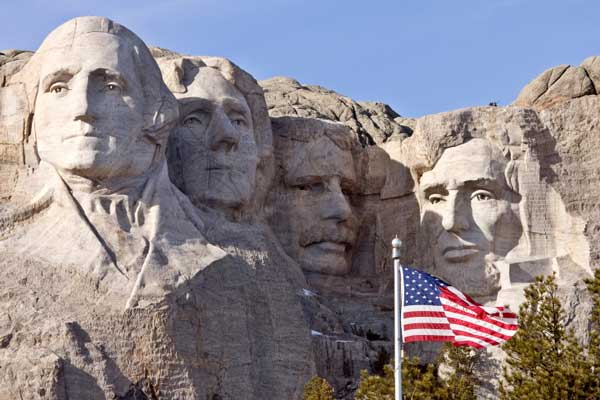 Every time I attend an event and hear the Star Spangled Banner, I try to think of what it must have been like during the days of war which gave birth to our powerful National Anthem.  It was at the historic Fort McHenry in 1814 that a young lawyer, Francis Scott Key, wrote the lines that we have all heard and sung thousands of times.  On your journey to the most patriotic places, you should definitely plan a stop in Baltimore where you can enjoy a fun day of history while exploring the Inner Harbor, Fell’s Point and the National Aquarium. 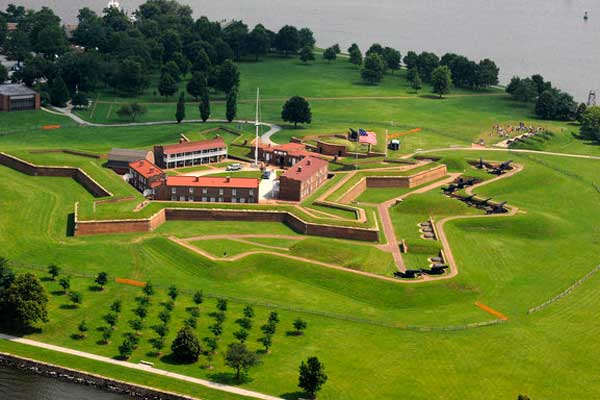 If you want to feel like you’ve been transported back in time to the Revolutionary War period, then Colonial Williamsburg will put you right in the center of the action. You’ll experience first-hand some of the struggles of wartime.  Be sure to visit the brickyard, cabinet maker, printing office, Governor’s Palace and the Capitol.  You’ll have so much fun, you won’t even know you’re learning.  Put the nearby Busch Gardens on your list for an extra day of good American fun. 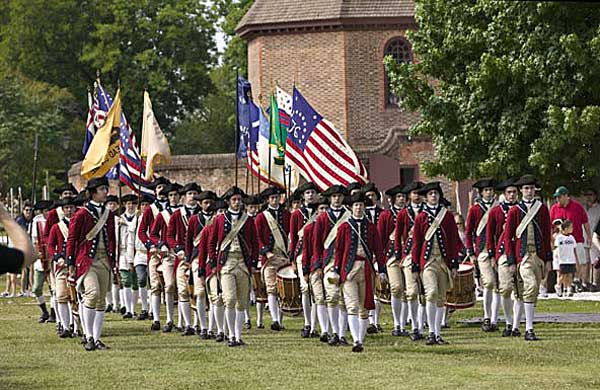 East Coast Beaches with Nearby History 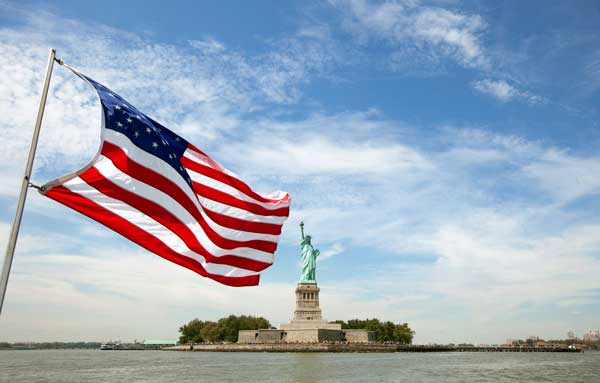