Black Canyon of the Gunnison one of the least visited National Parks.

With just over 175,000 visitors annually, Black Canyon is far less traveled than Colorado’s other national parks, like Rocky Mountain (4.5 million annually!). Of course there’s a very practical reason for this: Black Canyon is a loooong drive from Denver (nearly 5 hours), as well as other major hubs in the area. But hey, nothing worth having comes easy, right?

So if you want to be one of the few who experience this park, in its own words.

Age: Founded as a National Monument in 1933, I became a National park in 1999. However, I’m nothing new to indigenous peoples. Members of the Ute Tribe called this area home for centuries, even they feared and avoided the Gunnison River far below. And they should, because getting down there and back can be downright treacherous!

Location: The middle of nowhere. I’m between a 4- to 5-hour drive from Denver and Colorado Springs, without a major interstate nearby. But getting here is part of the adventure! There are two primary entrances to the park: the south rim entrance is located 15 miles (24 km) east of Montrose, while the north rim entrance is 11 miles (18 km) south of Crawford and is closed in the winter. 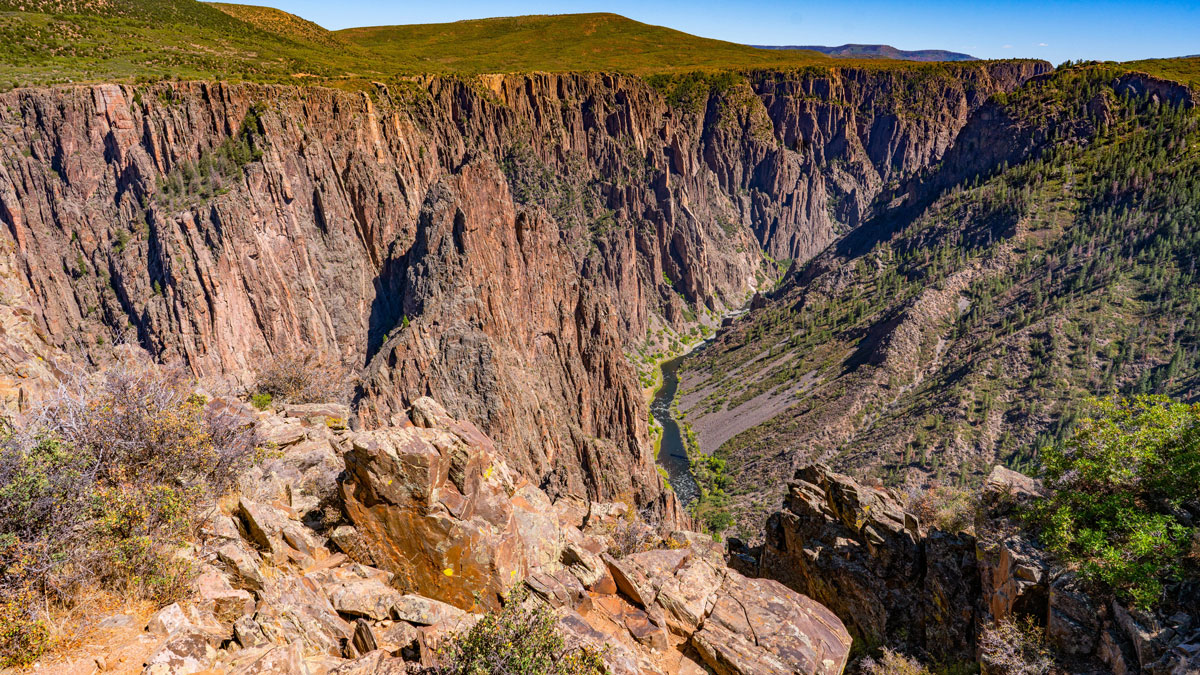 Height: Here’s a fun fact… you’ll find the steepest cliff in Colorado within the Black Canyon. The Painted Wall towers 2,280 feet from river to rim. And since we’re on the subject of my cool stats, the narrowest point in the canyon spans just 40 feet across (creatively named The Narrows).

What’s your favorite park overlook? Black Canyon is home to the fastest bird in the world, the Peregrine falcon. Scientists estimate that Peregrines can reach speeds of over 200 mph in an aerial dive. These incredible birds most commonly nest in the Painted Wall, so I suggest getting a two-for-one geological and biological vista by checking out the Painted Wall View. 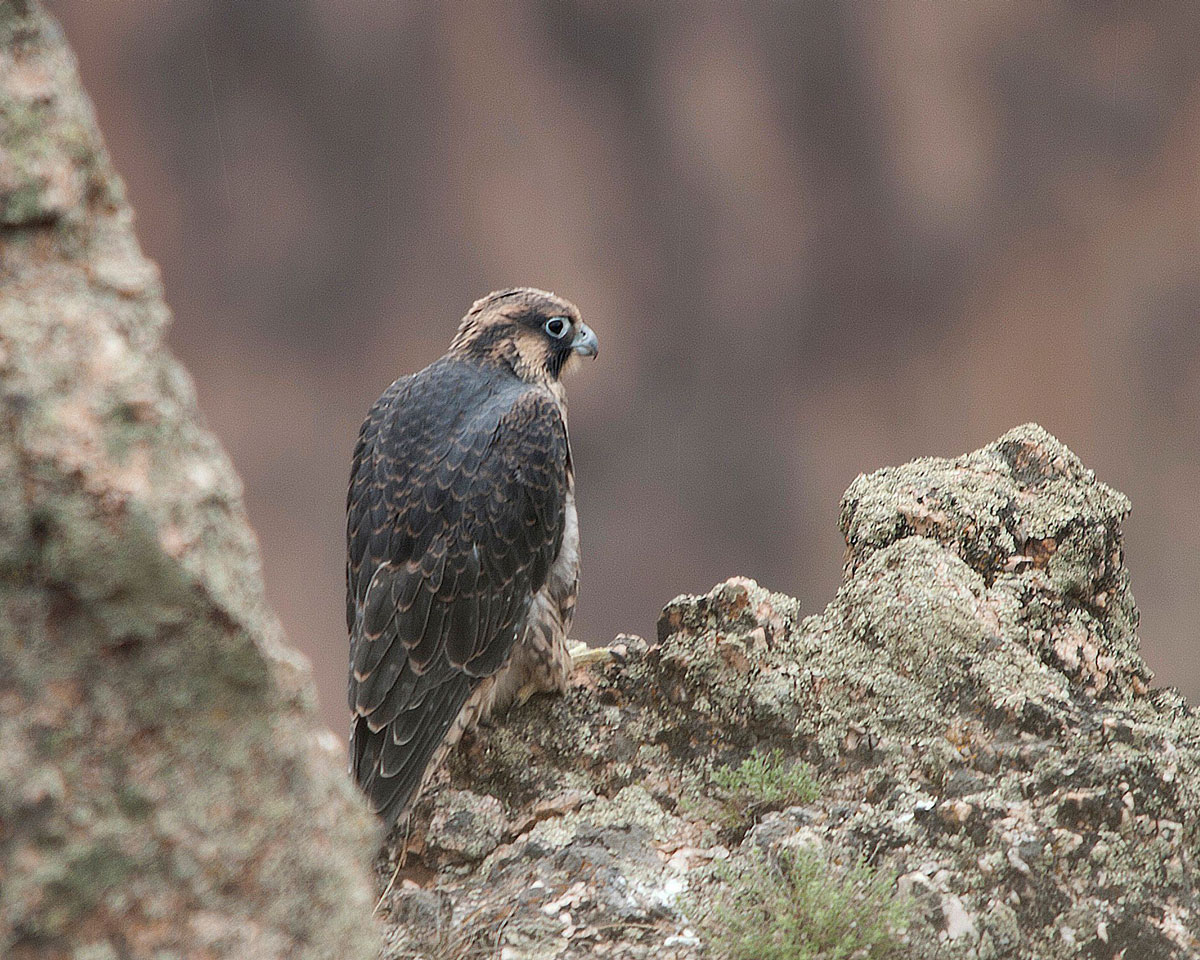 Claim to fame: Did you know that due to the narrowness of the canyon, certain areas of the park experience just 33 minutes of light a day? Yep, and that’s how I earned my name.

Take me to the river! Yes, you can hike alllll the way down to the inner canyon. But it ain’t easy. First, the interior is a designated wilderness area, so there are no maintained trails leading to the bottom of the chasm. They legally can’t even erect signs marking the route. If you want to get all the tips on making it to the river, check in with a ranger for a brochure and personal tips. It’s good to ask them all sorts of questions, especially since you need to check in with them to complete the free and mandatory wilderness permit for day or an overnight stay. 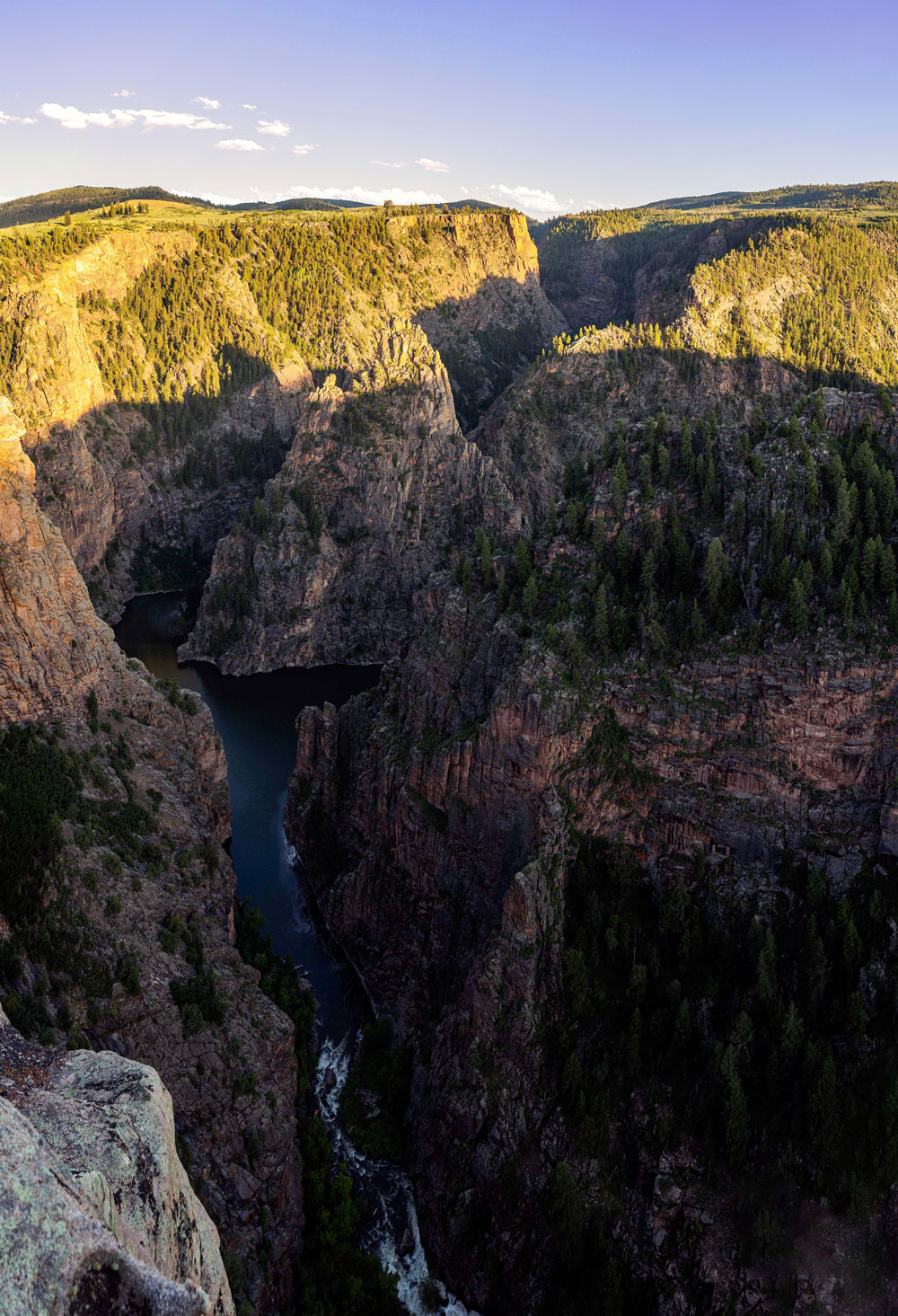 But should I hike? Rangers stress that only people of well-above average fitness, route-finding skills, and an abundance of gumption should consider sliding… er, I mean hiking, to the bottom. You will need four liters of water per person, per day, and enough food to sustain you for 24 hours longer than you plan to be out. A headlamp, fire starter and waterproof matches (for emergency use only; campfires are prohibited), and a first-aid kits are musts.

The best routes are Gunnison Route and the S.O.B Draw (yes, that stands for what you think it does). The former is the most well-trodden, a one-mile trail from the south rim with a vertical drop of 1,800 feet. The S.O.B. starts along the north rim, and runs 1.75 miles with a vertical drop of 1,800 feet. Here, the main enemy isn’t slipping (though that, too), but the proliferate poison ivy. Wear pants and bring along a cream to protect your skin from that S.O.B.

Okay, maybe I’ll just stick to the rim: There are plenty of trails to hike along the canyon’s rim. Try the Warner Point Trail, located at the very end of South Rim Road. It’s about a mile and a half, and takes about an hour. Though the trail doesn’t have a lot of views of the canyon, it’s still beautiful and ends with a spectacular view of the canyon and river.

No shame in your car game: The vast majority of park goers spending a day driving along South Rim Road—stopping at the visitor center and spots with promising names like Devils Lookout, Chasm View, and Painted Wall View. 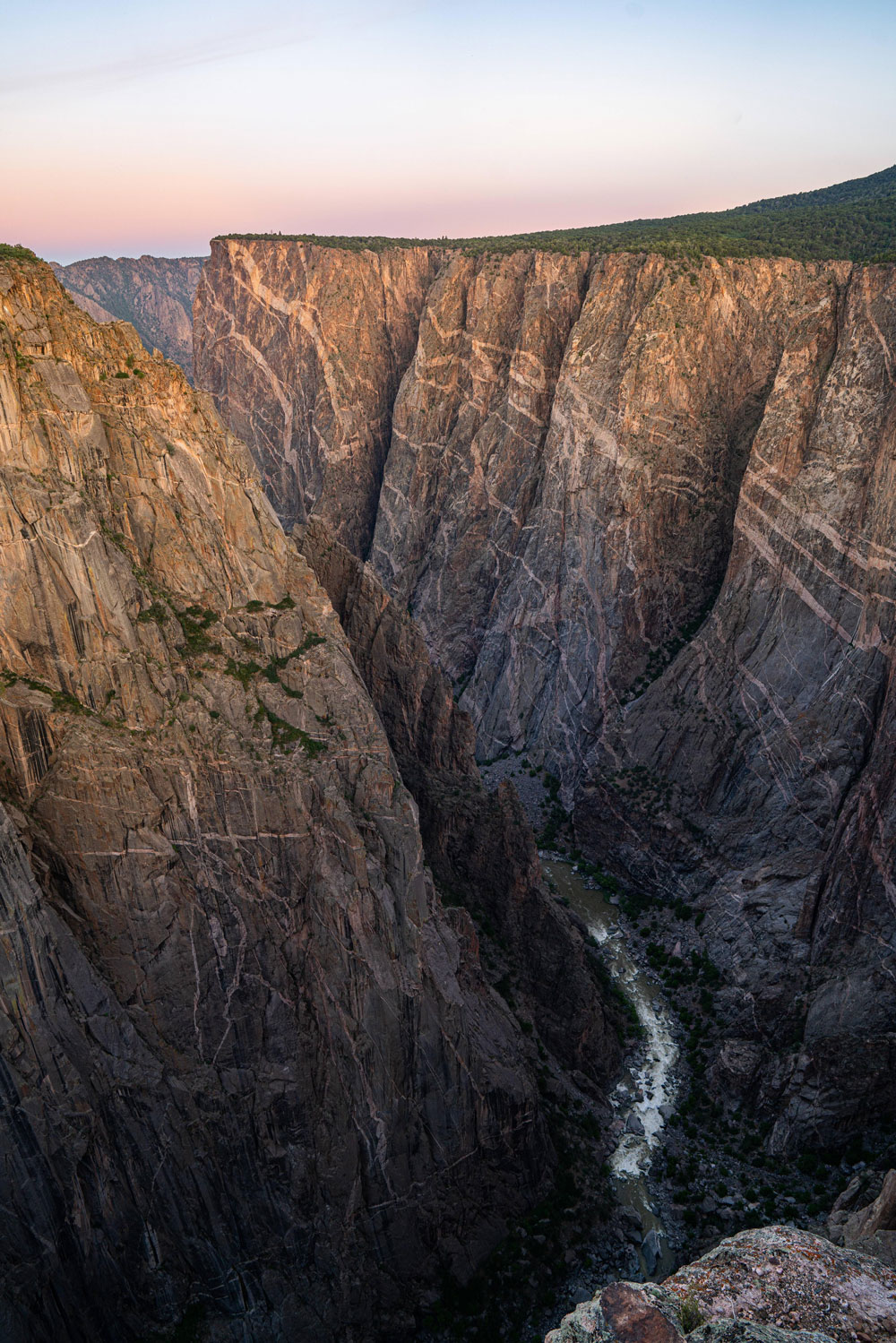 Wildlife: Well, of course, the aforementioned Peregrine falcon is a favorite. But luckiest of visitors will get a glimpse of the great “ghost of the Rockies.” If it’s a mountain lion you’re looking to see (or avoid), the best time to keep your eyes peeled is early morning and evening. Bobcat and black bear are occasionally seen this time of day as well.

Not to be presumptuous, but if you were to spend the night: If you want to stay really close, you’re camping. There are three campgrounds: the South Rim, the North Rim, or the East Portal campgrounds. You can book a site at the South Rim online, and the other two spots are first-come, first-serve. It’s good to know that there’s not a drugstore or grocery store nearby, so bring everything you think you may need. Oh, and if you’re spending the night, it’s worth mentioning that our stargazing it top notch! If you’re into seeing the Milky Way, visit during a new moon. 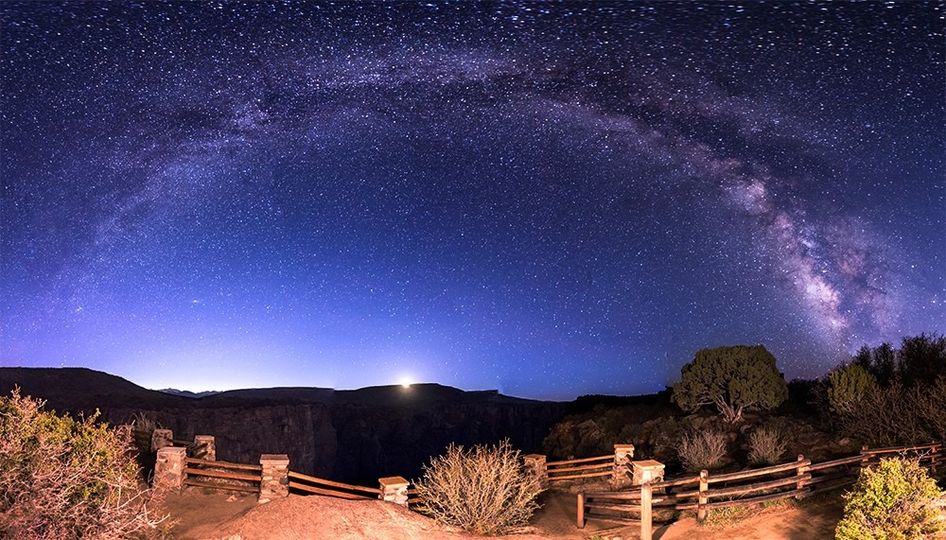 If you prefer four walls and a continental breakfast, you can book a basic hotel room in Montrose, Colorado, the closest town (a 30 to 40-minute drive from the park).

Favorite Season: Summer. Yes, it’s the busiest time, but “busy” here is relative. Both rims are open, so you’ll have access to just about everything. That said, if you like snowshoeing and cross country skiing, we have a lot of that come winter and it’s simply spectacular. 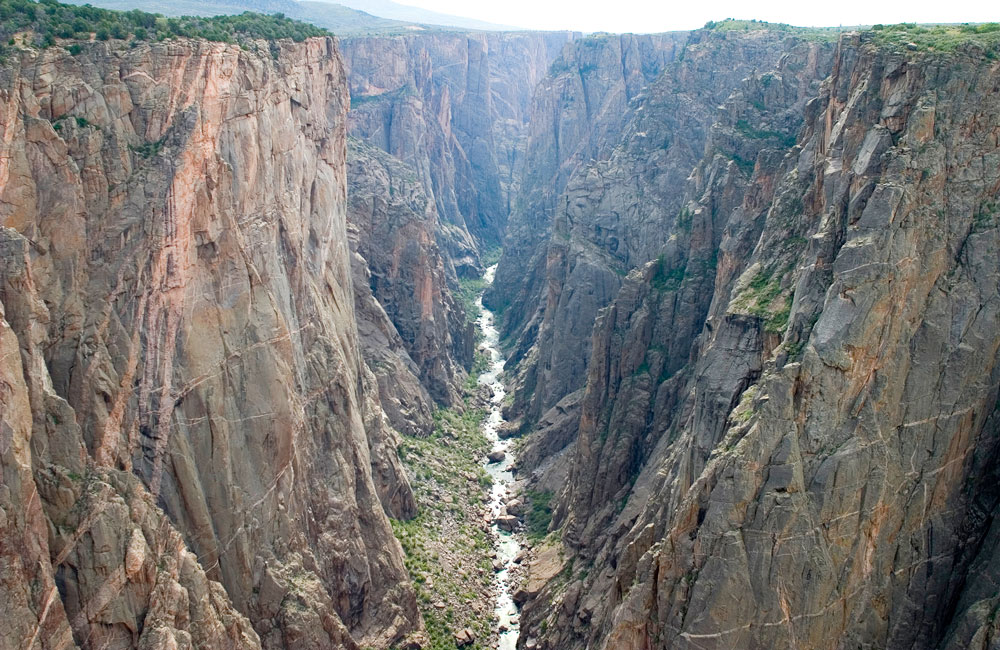 Favorite quote:  You’ve heard that what comes up must come down. But here, it’s good to remember: Those who hike down must also hike back up.

Shhh, don’t tell: If you love to have nature all to yourself, visit the North Rim. Something like three percent of the canyon’s visitors make it to the North Rim. Since there’s no bridge over the canyon, getting there requires a two- to three-hour drive. Those willing are rewarded with solitude and even more dramatic vistas. But remember: the north rim is closed mid-November through April.

Since you’re in the area: Check out the Gunnison Gorge National Conservation Area & Wilderness. There’s a lot of ways to get out on the river, and my favorite is white water rafting! Book a trip with a local outfitter like Dvorak Expeditions. Sign up for a full day, or multi-day excursion. Dvorak also offers fly fishing excursions down the Gunny, where participants will (fingers crossed) catch their fill of brown and rainbow trout.

Craving a little civilization? Montrose is about 30 minutes away and boasts cute coffee shops, diners, breweries and more. Stop at Colorado Boy Brewery for pizza and beer, then grab a growler, crowler or six-pack for back at the campsite. 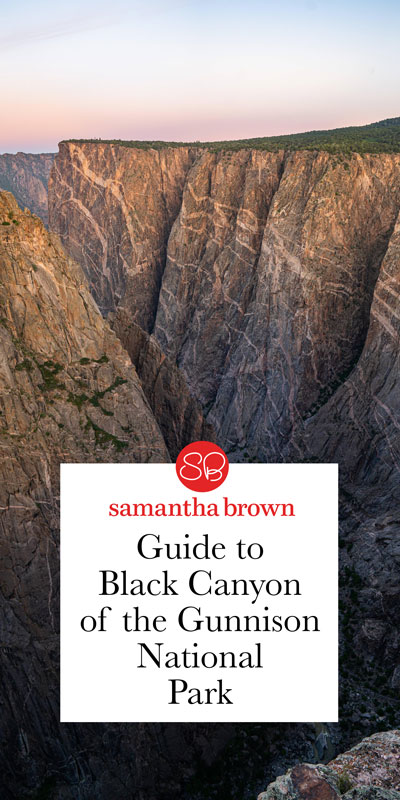