Outdoor markets, warmly lit downtowns, cozy restaurants, cheerful locals… there is something special about American small towns when it comes to the holiday season. Don’t get me wrong, all the cities I know of go all out with the huge light displays and tree lighting, but I prefer visiting smaller Christmas towns instead of major metropolises once December hits. I love how local residents and businesses come together to capture what makes the season so festive.

Below I’ve listed some of my favorite Christmas towns in the U.S. to visit this year! 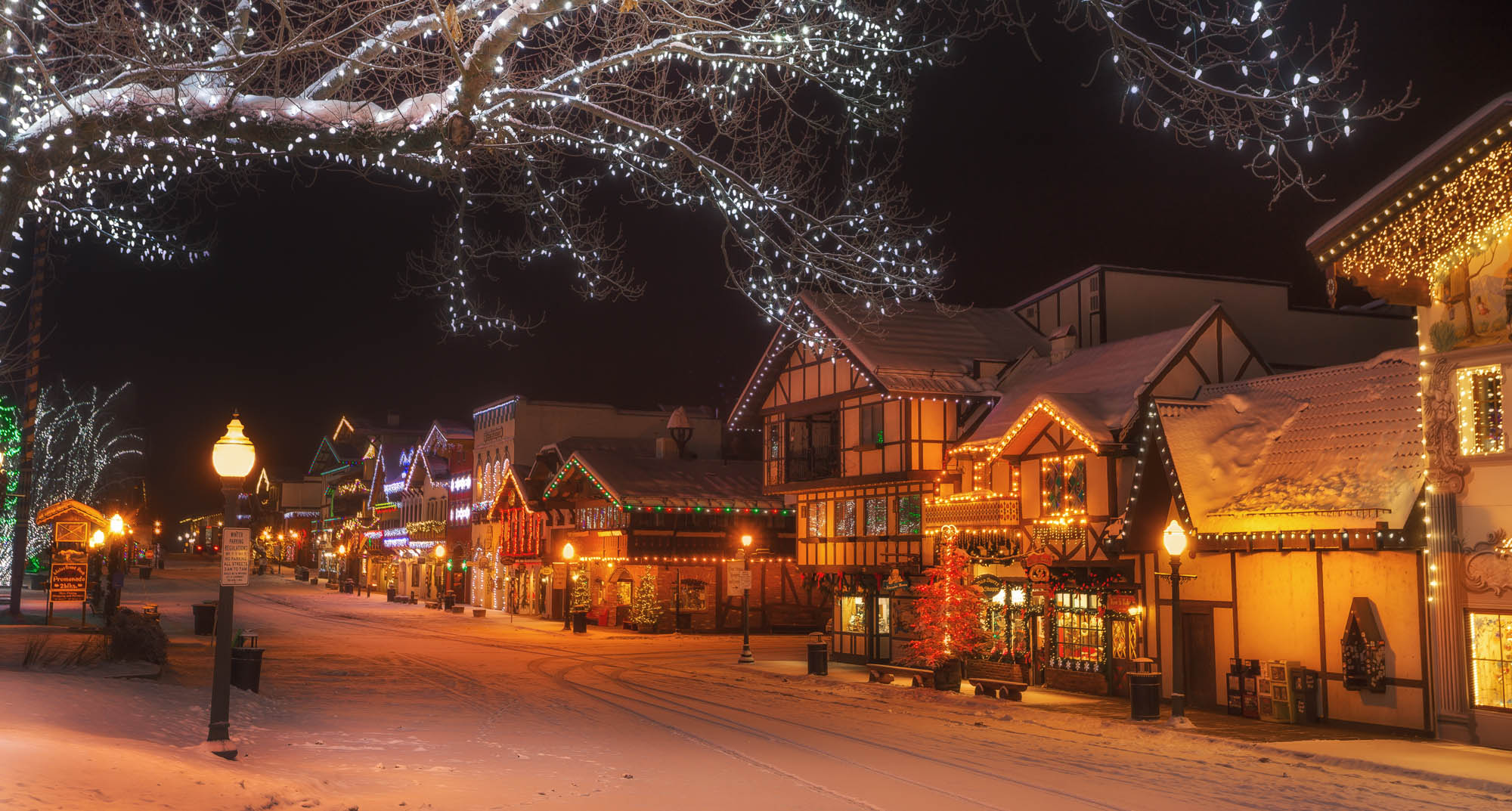 Surprisingly, Leavenworth has not always had its Bavarian-style appearance. It was only in the 1960s that the town decided to completely renovate its downtown to look as though a visitor had traveled to the famous German state! Since then, it’s been on an annual holiday festival and has quickly become one of the country’s best Christmas towns to visit. They begin hanging up some half a million LED lights on the third Monday of October and run their Village of Lights: Christmastown festival all month long leading up to the big day.

Every year is different, but you expect all sorts of cheerful festivities, with the main performances happening at the town gazebo.

My hometown of Portsmouth knows how to put on a show for the holiday season! Since 2005, the Strawberry Banke Museum and The Music Hall have partnered up to put on a vintage Christmas spectacular that lasts all month. It’s a fantastic event for those who enjoy a little nostalgia for their celebrations.

A must-do is the Candlelight Stroll, which goes through Strawberry Banke’s historic houses. It’s a tradition that’s been around for over forty years, and every house is aglow with candles and costumed performers. You’ll also have to check out which holiday musical is played at The Music Hall as it changes each year, and, of course, all entrants take the Gingerbread House contest very, very seriously.

For more on what to do nearby, check out our “New Hampshire” episode. 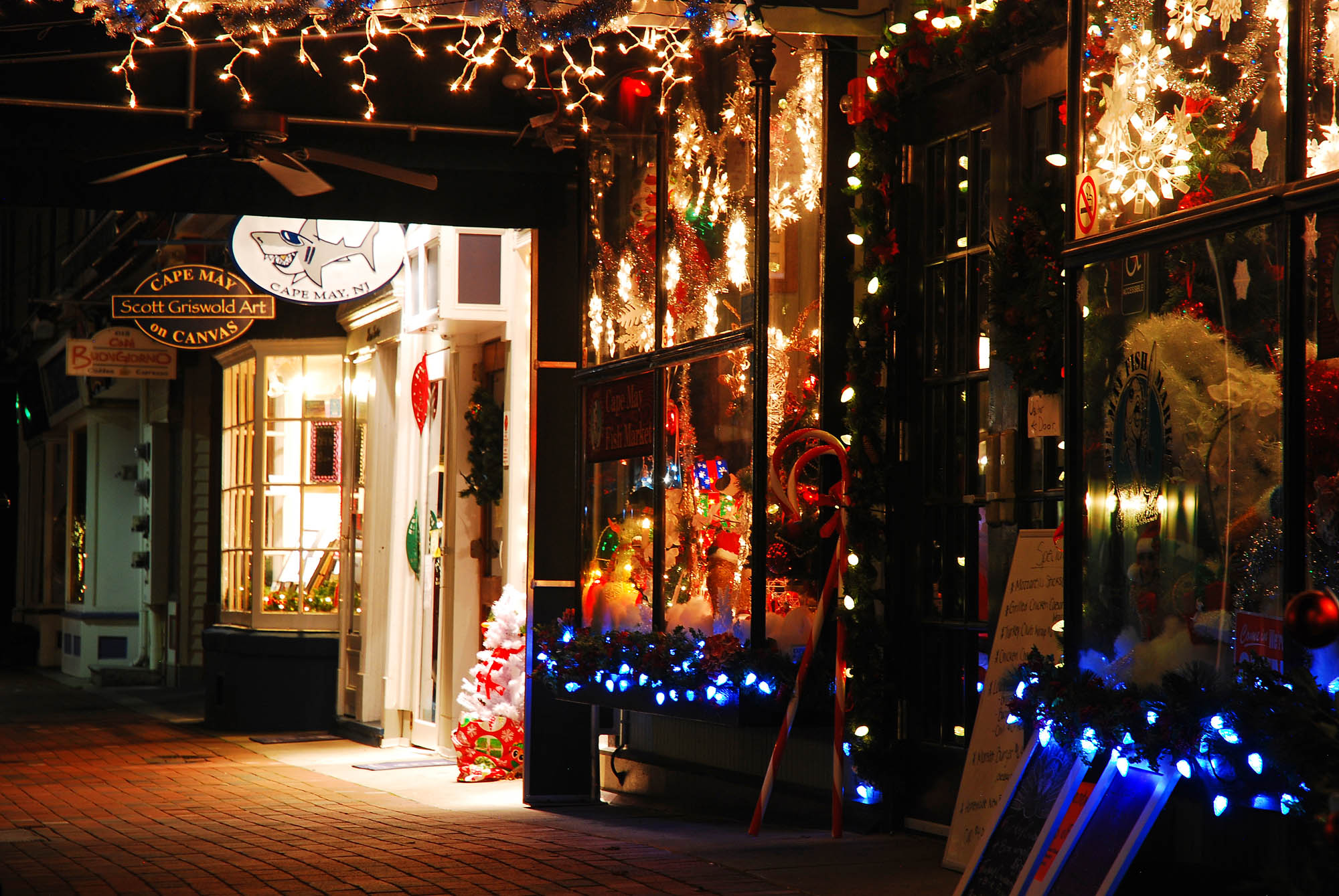 When it comes to the Jersey Shore, Cape May and its many well-preserved Victorian homes offer become the perfect place to get into the festive spirit. The entire town transforms into a Dickens village, kicking off with a tree-lighting ceremony at Physick Estate in mid-November and lasting through the new year.

Check their activities calendar to see upcoming events like a winter wonderland at Congress Hall, holiday-themed trolly rides, and, of course, when to have breakfast with Santa. Cape May’s happens on the first Saturday in December for those who love a good parade.

For more on what to do nearby, check out our “Jersey Shore and More” episode.

How can I not add a town called Santa Claus to my list when it comes to Christmas towns? Yes, you read that correctly; there really is a town in Indiana named after the big guy himself. Apparently, they originally wanted to call themselves Santa Fe, but another place in the state claimed it first, so they eventually settled on Santa Claus in 1856.

Since then, they’ve taken their name very seriously. Their post office, which is the only post office in the world to have Santa’s name, even has its own “elves” to help respond to the many wishlists it receives. Each year in the lead-up to Christmas, the town spends each Friday – Sunday with tons of delightful events that’ll have even the most skeptical kid believing in Kris Kringle.

For good reason, Jim Thorpe has consistently been named one of America’s most beautiful small towns. Located in the Pocono Mountains of Pennsylvania, the town is full of historic buildings and Victorian architecture that offer the perfectly cozy feeling you want in your Christmas towns. The town’s Old Time Christmas kicks off with a tree lighting at Josiah White Park in the beginning of December, though lights can be seen beginning in the fall.

Each weekend in December, the town hosts a number of activities that’ll capture that old-fashioned wonder, from trolley rides to carolers and more. If you visit when it’s snowed out, get a seat on the Lehigh Gorge Scenic Railway!

If you’re looking for a truly unique Christmas town, head over to Taos in New Mexico. Only an hour and a half from Santa Fe, this town has become famous for its Yuletide celebrations which happen from Thanksgiving through the new year.

What makes this place so special is how Native American, Spanish, Mexican, and modern American cultures have blended to offer different festive events. As one of the oldest continuously inhabited communities in the continent, it shows what the holiday spirit looks like in a New Mexico pueblo. One thing to look for are the farolitos, or candles placed inside a paper sack, that line the streets and give the town a warm glow even in the coldest desert nights.

Less than an hour from enigmatic Louisville, Bardstown is to Kentucky bourbon, what Napa Valley is to California wine. On top of that, it’s a charming small town with holiday activities starting as early as November 11th!

Check out fun events for Christmas ‘Round Bardstown like “Merry & Bright” at My Old Kentucky Home, ride the North Pole Express, check out Bardstown Kiwanis Club’s Annual Christmas Parade, and so much more throughout the month+ leading to the big day. 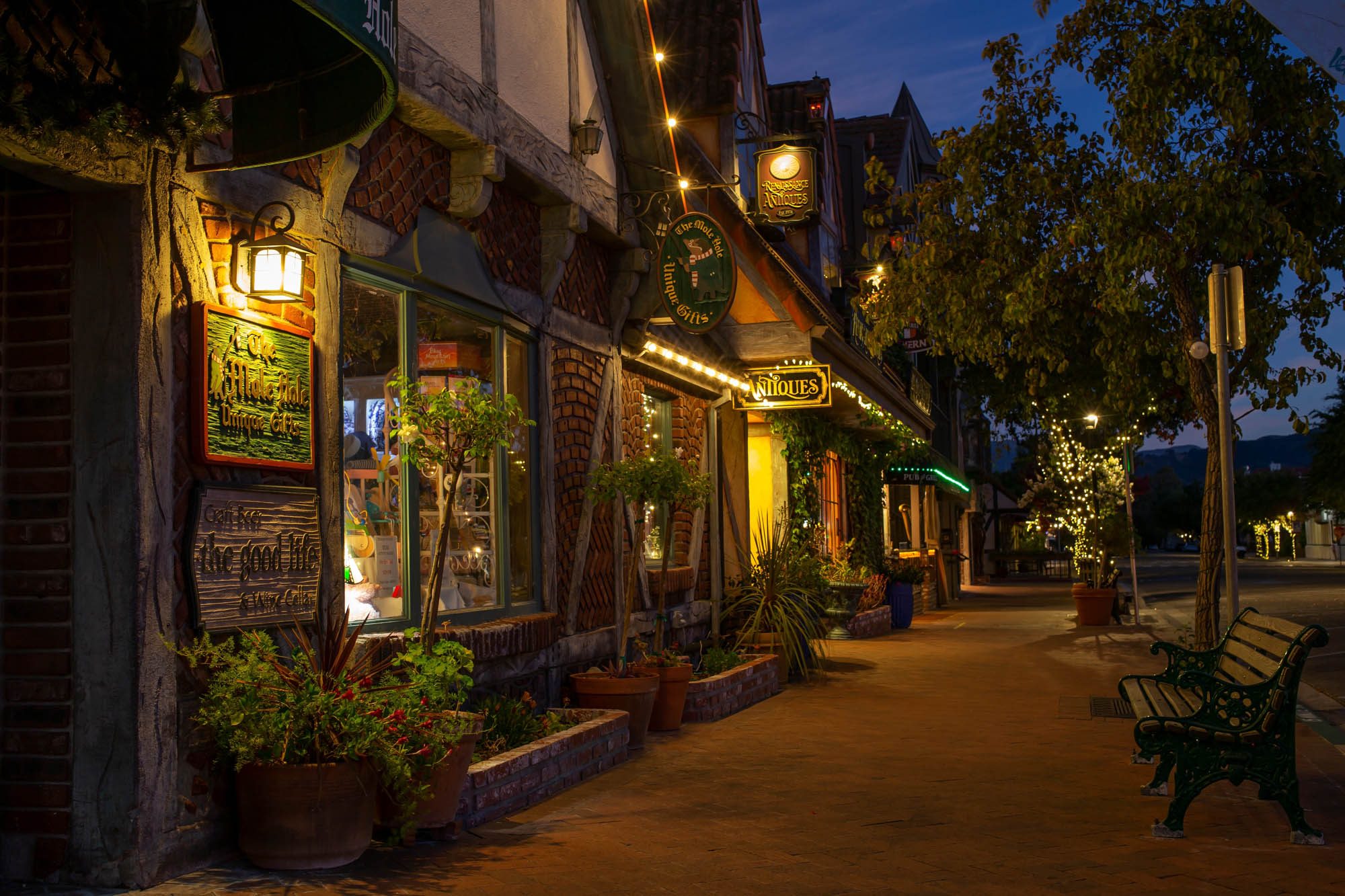 Of all the places you can stop on a California road trip, Solvang is easily the most unique. Near Santa Barbara, this village looks like something out of a Danish fairytale. Its origins began when Danish-Americans purchased land in 1911 to escape the Midwestern cold and built their distinctive architecture a few decades later.

As you might guess from its southern Californian location, Solvang is a warm, sunny place to celebrate Christmas if you, like the early 20th-century Danish Americans, prefer somewhere warm. Beginning after Thanksgiving and going through to January 1st, its annual Julefest Christmas celebration is a month of all sorts of celebrations and lights. Think a tree lighting, a parade, candlelight tours, and, of course, Santa’s Village. One unique tradition is the Nisse Adventure (“nisse” is gnome in Danish). All around downtown Solvang are hidden nisse that visitors can help track down! 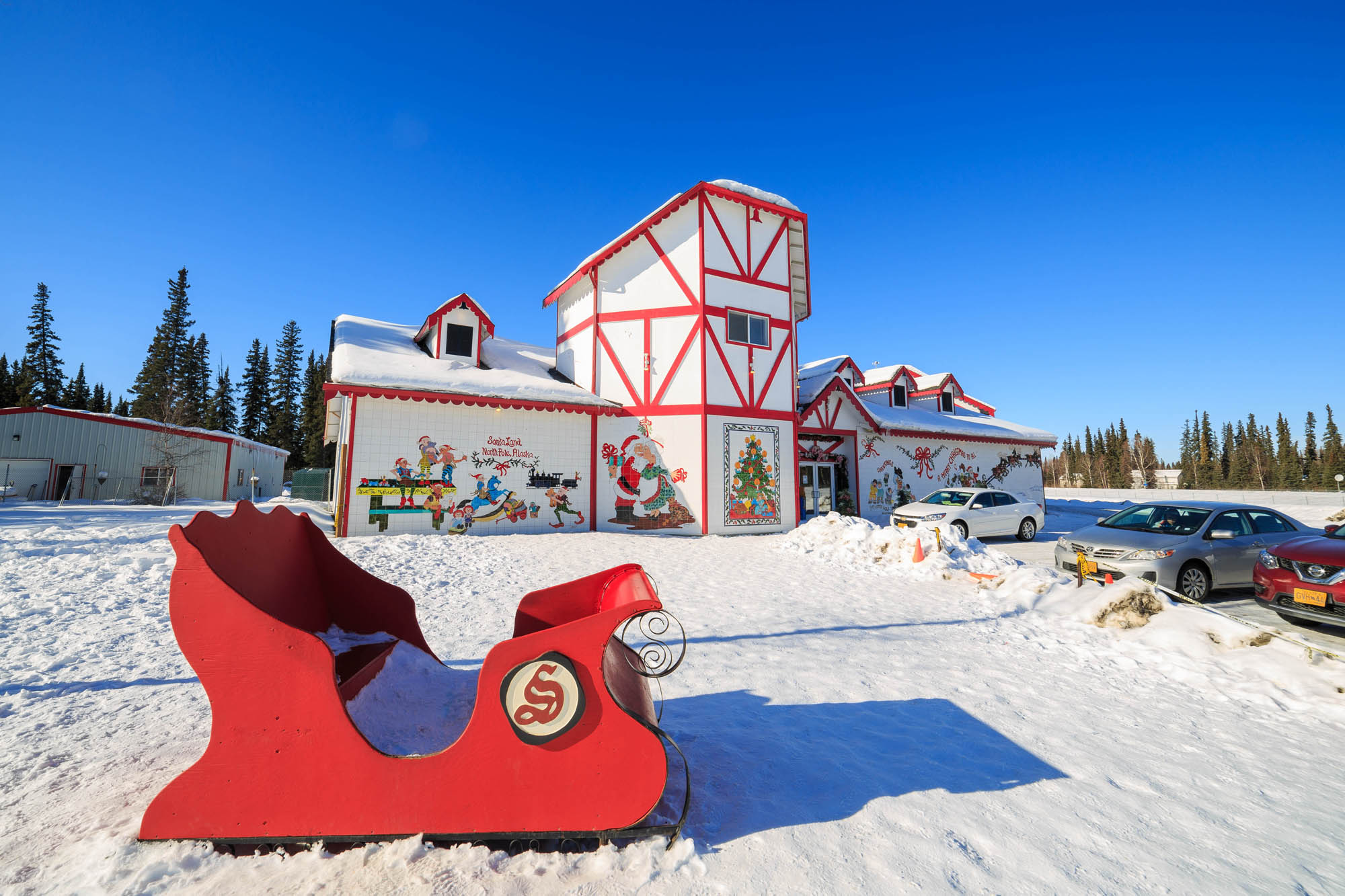 Just like Santa Claus, IN, no Christmas town list is complete without including the North Pole. This small city in the center of Alaska may not actually be in the Arctic Circle (actually, it’s about 125 miles south), but it does promise Christmas every day. With street names like Kris Kringle Drive or Mistletoe Lane, you know they mean business.

The most important thing to do is to go right to the Santa Claus House, which is full of toys and ornaments. Snap a pic with the giant statue of Santa right outside, and be sure to tell the real Santa inside all your wishes! If you come in December, you’ll also be able to visit Christmas in Ice. This winter ice park has many ways to enjoy the frozen outdoors, from art pieces to slides and more. 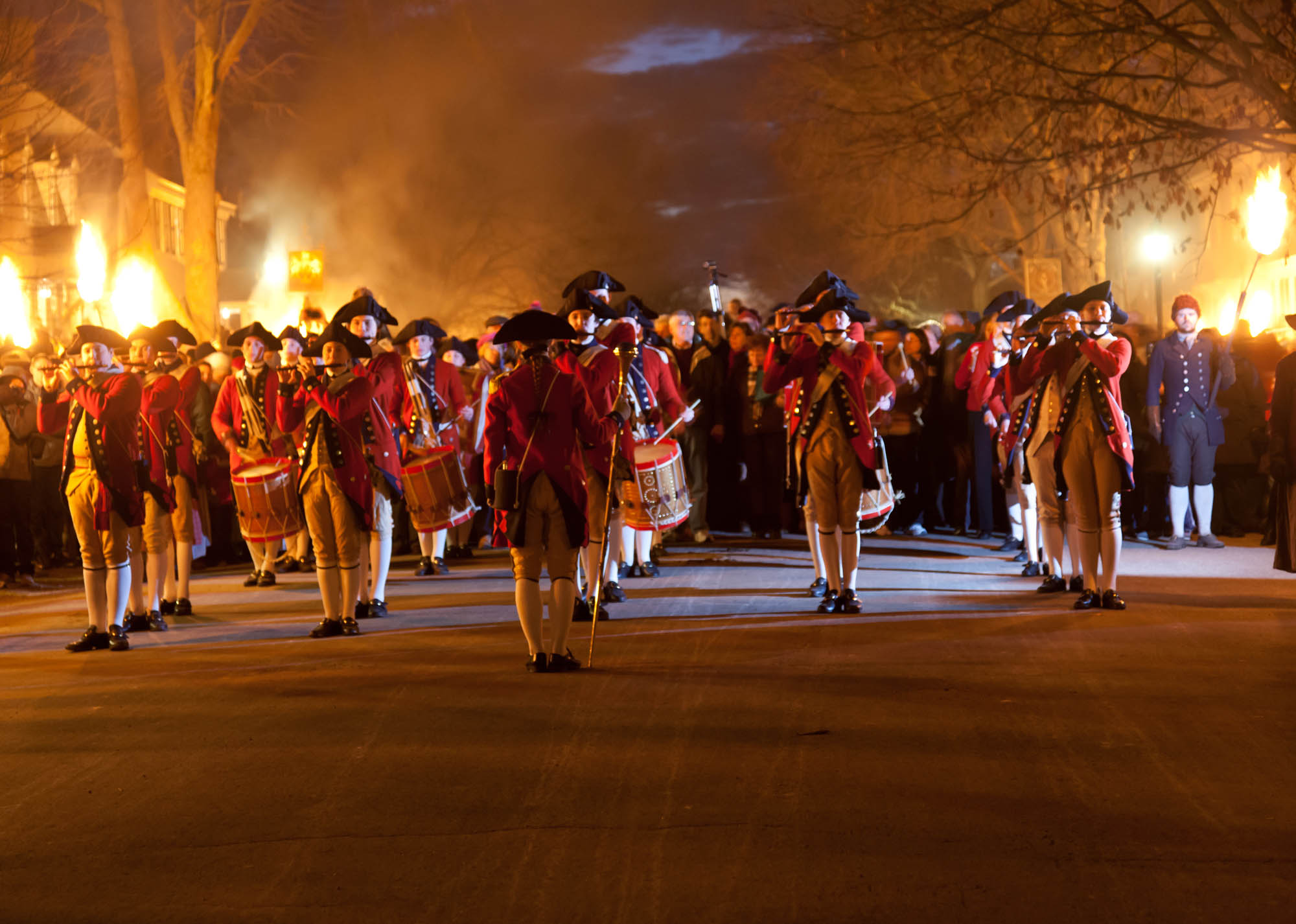 Colonial Williamsburg is a must-visit for anyone who loves some U.S. history, and it’s even more magical when the weather cools down, and Christmas is on the horizon. Busch Gardens alone is worth a trip to this Virginian destination. Its eight European villages are all decked out for the holidays, and it’s one of the biggest light exhibitions in the country, with over ten million lights. If you have a car, you can also drive around nearby neighborhoods to see how seriously they all take their decorations. 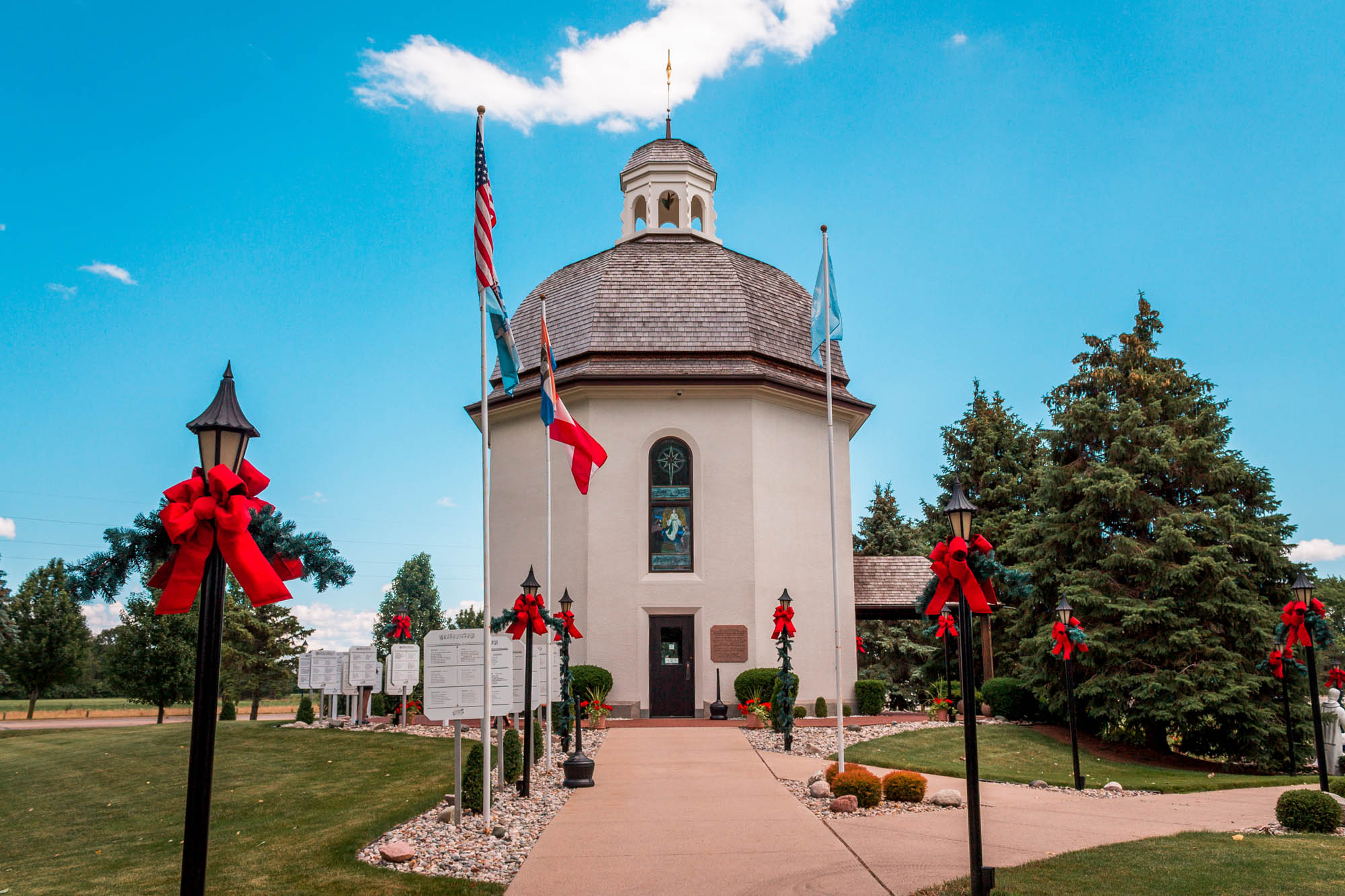 Frankenmuth is another town in the U.S. inspired by Bavaria – mostly because it was largely settled by German immigrants from Roßtal. The town knows how to get in the festive spirit especially because it’s home to the world’s largest Christmas store – Bronner’s Christmas Wonderland. Designed to look like a chalet, the store is over seven acres with thousands of figurines, ornaments, lights, and more. If you have someone who loves Christmas decor, be prepared to spend hours making your way through the many, many options.

Back in town, check out its Christkindlmarkt and stroll around Main Street to see it all decorated for the holidays. Don’t miss the Musical Tree Show, where a 40ft Christmas tree puts on a 7-minute musical show Sunday through Thursday. You can also play judge and vote for which houses have the best decorations as part of the Jaycees Joyful Jubilation competition.

Looking to mix a little skiing into your celebrations? Head right over to one of Colorado’s Christmas towns – Durango. Pick from any of the ski resorts near town to get out on the slopes before returning downtown to cozy up by the fire. Other fun outdoor activities include snowmobiling, dog sledding, skijoring (where a horse pulls you along on skis), sleigh rides, and fat biking (bikes with huge tires so you can bike on the snow).

The most magical thing to do in Durango for the holidays, though, is to ride the Polar Express! The experience runs from mid-November through the new year and aims to recreate the movie and book’s magic in real life. Wear your warmest pajamas as chefs serve up some hot chocolates and sweets aboard this vintage steam train on its way to pick up Santa Clause from the North Pole.

And there you have it – some of the most magical Christmas towns in America that you can visit in real life! 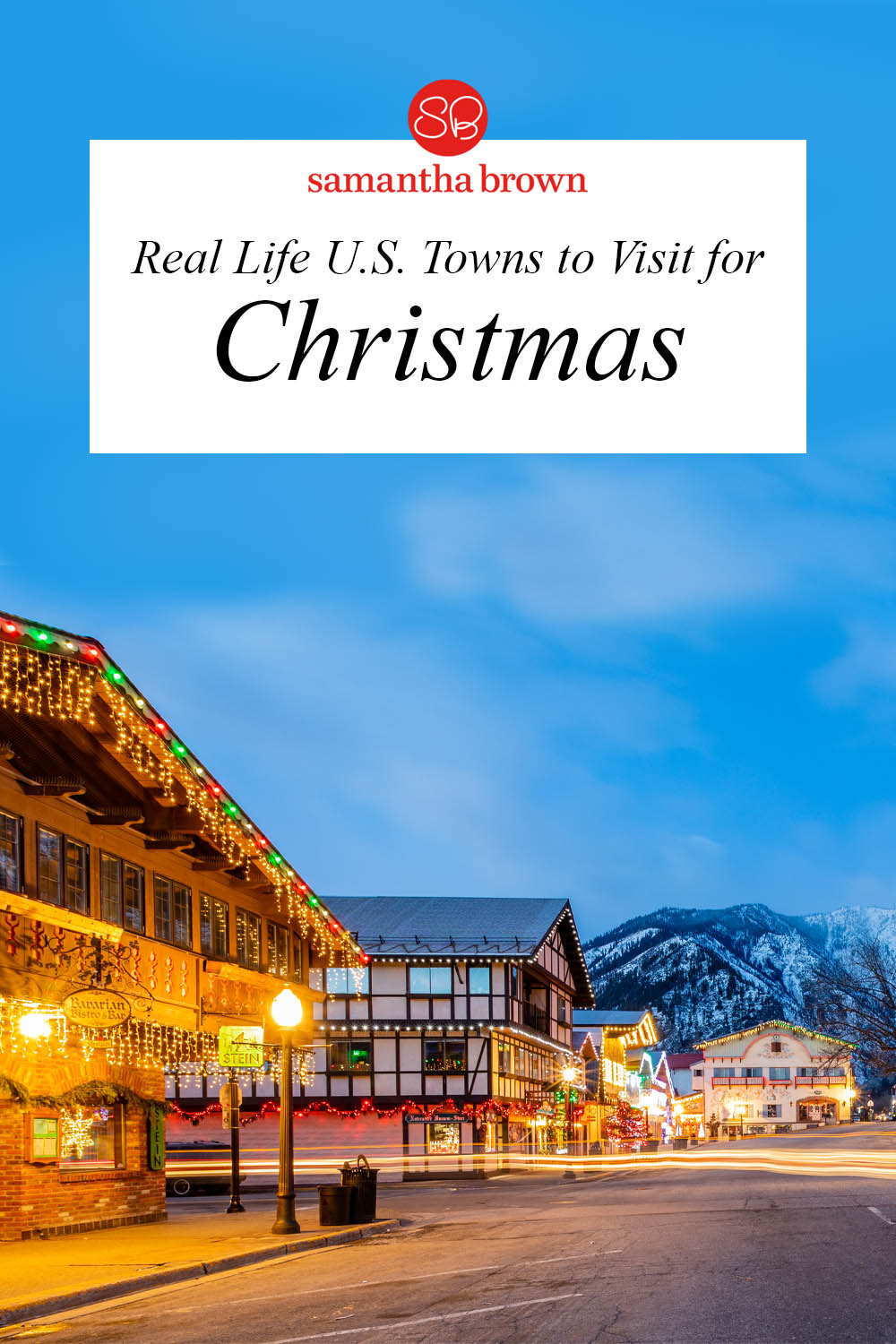 With so many fantastic places to visit in Florida, it's no surprise that most Americans…