As a traveler, I’ve always been delighted by age-old traditions that take place here in the United States. Abroad, the celebrations leading up to Christmas become downright enchanting. I love family traditions, like having a make-your-own-taco buffet for dinner on Christmas Eve and opening ONE present (please don’t let it be socks, please don’t let it be socks). However, I often daydream about spending Christmas in an ancient European city or maybe even on a beach!

If you’re looking to travel over the holidays, here are four of the world’s most incredible Christmas celebrations. 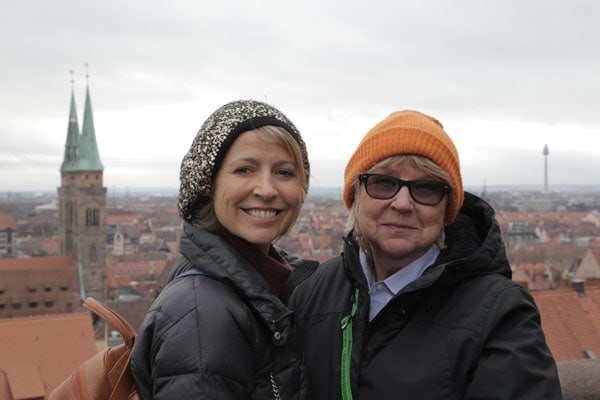 A few years ago, my husband Kevin and I took my mom, aka Oma, to Munich and Nuremberg for the Christmas markets. It was as magical as everyone says.

Nuremberg hosts one of the oldest markets in the country, dating back to the mid-16th Century. Germans love their traditions, so don’t expect LED lights and sparkling displays. Simple wood stalls tented with candy cane-striped fabric, gussied up with evergreens and white lights, are about as elaborate as it gets. Most of the crafts sold at the market are made by traditional regional manufacturers. Even the stalls are made of local spruce. I don’t think the look of these markets has changed much in decades (maybe even more), and that’s what makes them so special. 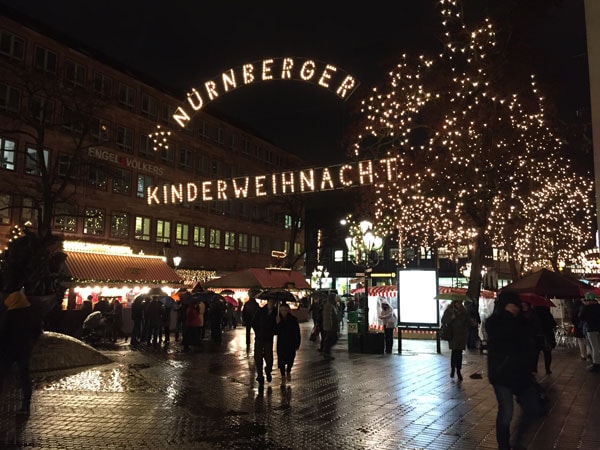 There are a few gifts to look for. I love traditional German incense smokers—wooden figurines (typically old men with beards and a pipe) that blow fragrant plumes out of their mouths. You’ll also find nutcrackers, beeswax candles, tons of ornaments, and those spinning Christmas pyramids whose fan blades always seem to fall off as soon as you touch them. Oh well, they’re fun to look at! 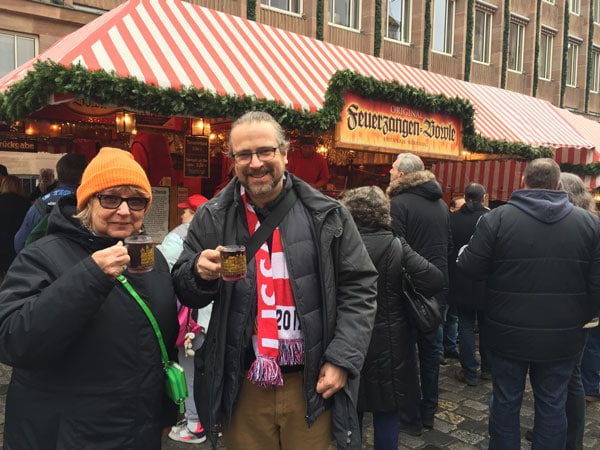 The market is as much about the goods as it is about food. Try the traditional rostbratwurst, a skinny sausage served in a roll and topped with loads of mustard. They’re delicious! Nuremberg is the home of the pretzel, so if there was any time to embrace the carbs, this is it. Stay warm with a mug of glühwein, a traditional sweet, spiced wine. They’re quite potent, but the good news is the sweetness will probably make your tummy hurt before you drink too much.

On weekends, you’ll hear concerts and choirs make music all day on the main stage, adding to an overflowing sense of Christmas cheer. 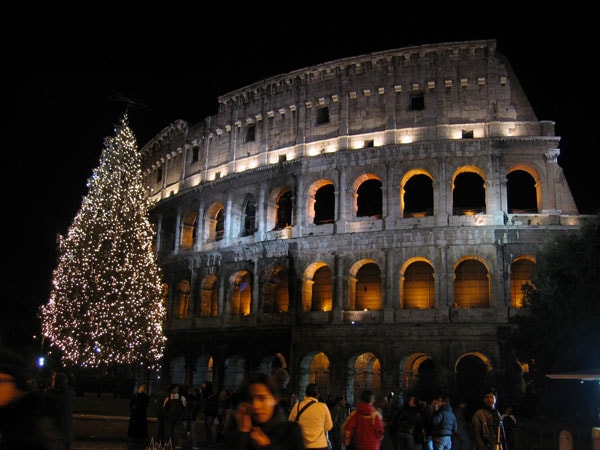 I say Italy is great any time of year, but it’s especially fabulous at Christmas. If you’re lucky enough to visit over the holidays, a trip to Rome is a must. Keep in mind the season here starts on December 8 (the day of the Immaculate Conception) and runs through January 6 (the Epiphany). Does that mean Italians, unlike Americans, don’t see Christmas promotions in August? Hmmmm. While Christmas through New Year is busy, the weeks right before and after are often less so. Experience the festivities without the crowds! Most attractions are open daily except Christmas Day and New Year’s Day. 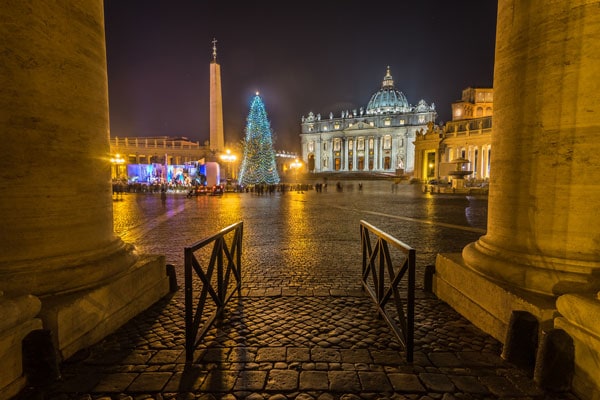 First order of business: Seeing the Pope. The ultimate is attending Christmas midnight mass at St. Peter’s Church. Be warned, tickets are required and hard to come by. You must book months in advance! The good news: if you’re planning next year’s Christmas, you’re a year ahead of the game. Without tickets, you can join the throngs of folks outside on the piazza, watching mass on jumbotrons. If you show up at midnight, you’ll miss the action—“midnight” mass actually begins at 9:15 pm. What can I say? Even the Pope needs his rest. There are many other ways to see the Pope over the holidays—check out this list for ideas.

Love nativity scenes? The Italians certainly do. They call them presepios (Italian for “crib”), and they’re all over the place. In fact, they have an entire museum dedicated to them. There truly is a museum for everything!

If I were to spend the holidays in Roma, I’d put on my walking shoes, bundle up and start meandering. The streets are decked with lights, and little family-run shops offer gifts you can’t find at the mall. Stop for an espresso and pastry whenever you like, and once your dogs start barking, maybe tuck into a cozy restaurant for some bucatini and vino Tinto. 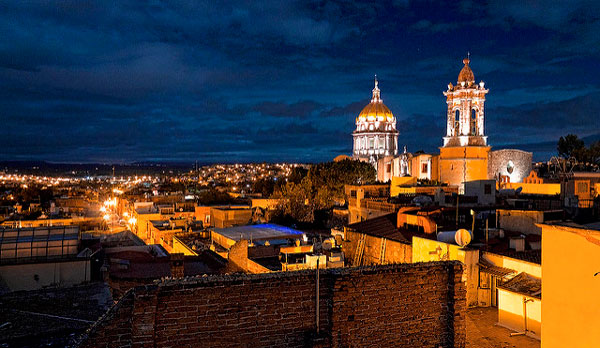 A lot of people flock to Mexico’s beachy all-inclusives over the holidays, but maybe it’s time you look inland. Located in central Mexico in the country’s state of Guanajuato, artists, writers, and travelers swoon over the bohemian vibe of San Miguel de Allende.

This Spanish colonial town celebrates Christmas with plenty of flair. In the days leading up to Christmas, theatrical reenactments of “Mary” and “Joseph” stroll through the streets, as well as the Three Kings and even a few Santas. El Jardin, the central square, serves as the hub for all things Christmas. Expect Christmas Eve fireworks, live music, and a life-size nativity scene, complete with live barnyard animals. Locals sip on ponche, a mulled brandy, and fruit drink, crack piñatas, and feast on Rosca de Reyes, a delicious sweet bread. 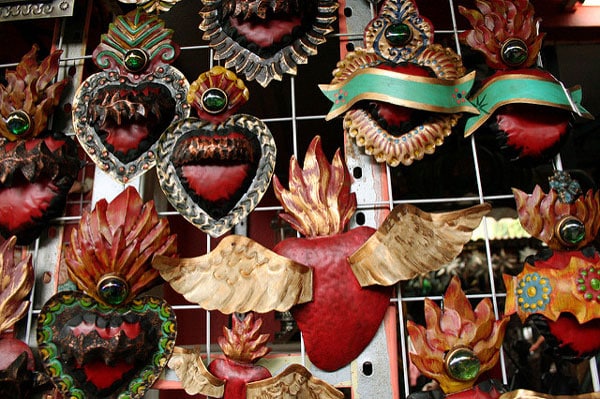 In addition to Christmas festivities, the city is home to incredible churches, architecture, and notable art. Food lovers should spend a morning strolling through Mercado Ignacio Ramirez, a market filled with flowers, produce, meats, prepared food, and home goods. For a little R&R, head just north of town for incredible geothermal waters—the perfect reward for those on the nice list… or maybe a needed rejuvenation for those who made the naughty list?

It blows my mind that so many people experience Christmas in the summer. If you’d prefer to spend Christmas in shorts and flip-flops, might a suggest a trip to Sydney? 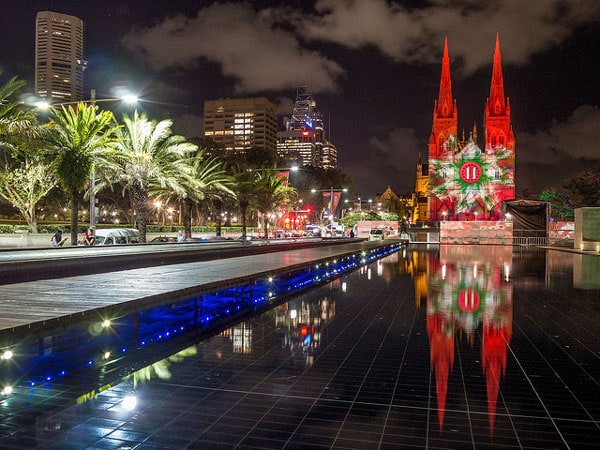 Unlike most European cities, Sydney puts a more modern spin on the holidays. There’s the majestic Christmas tree at Martin’s Place, decorated with LED lights and adorned with an interactive ribbon that displays Christmas messages delivered via text. St. Mary’s Cathedral goes all out, dressing itself with animated lights set to music. Illuminate your shopping experience under Pitt Street Mall’s Boulevard of Light, a canopy of thousands of twinkling lights. For sensory overload (in a good way), Sydney’s best choirs sing carols at the mall every Thursday night in December. 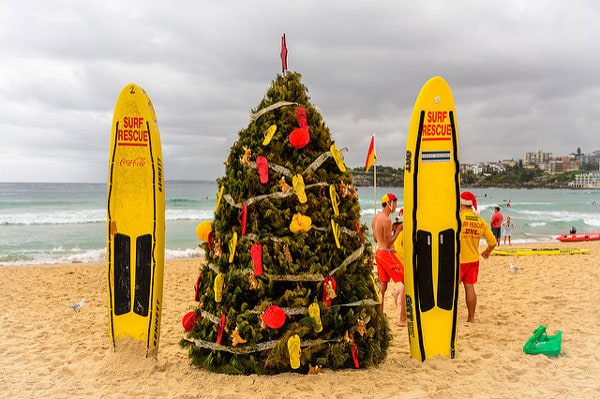 For a white sand Christmas, head to Bondi Beach. Located just outside Sydney, this beach used to host a Christmas Day party rivaling spring break on Daytona Beach. The police have since banned booze on Christmas Day; however, the spirit of celebration lives on. You’ll see loads of beachgoers in bikinis and reindeer antlers, bros in board shorts and Santa hats, and maybe even Santa in a Speedo. Fingers crossed! A few years ago, the beach even broke a world record for the most surfing Santas. Expect to see lots of families picnicking and basking in the hot summer sun.

Have you ever vacationed over Christmas? What are your favorite Christmas destinations? 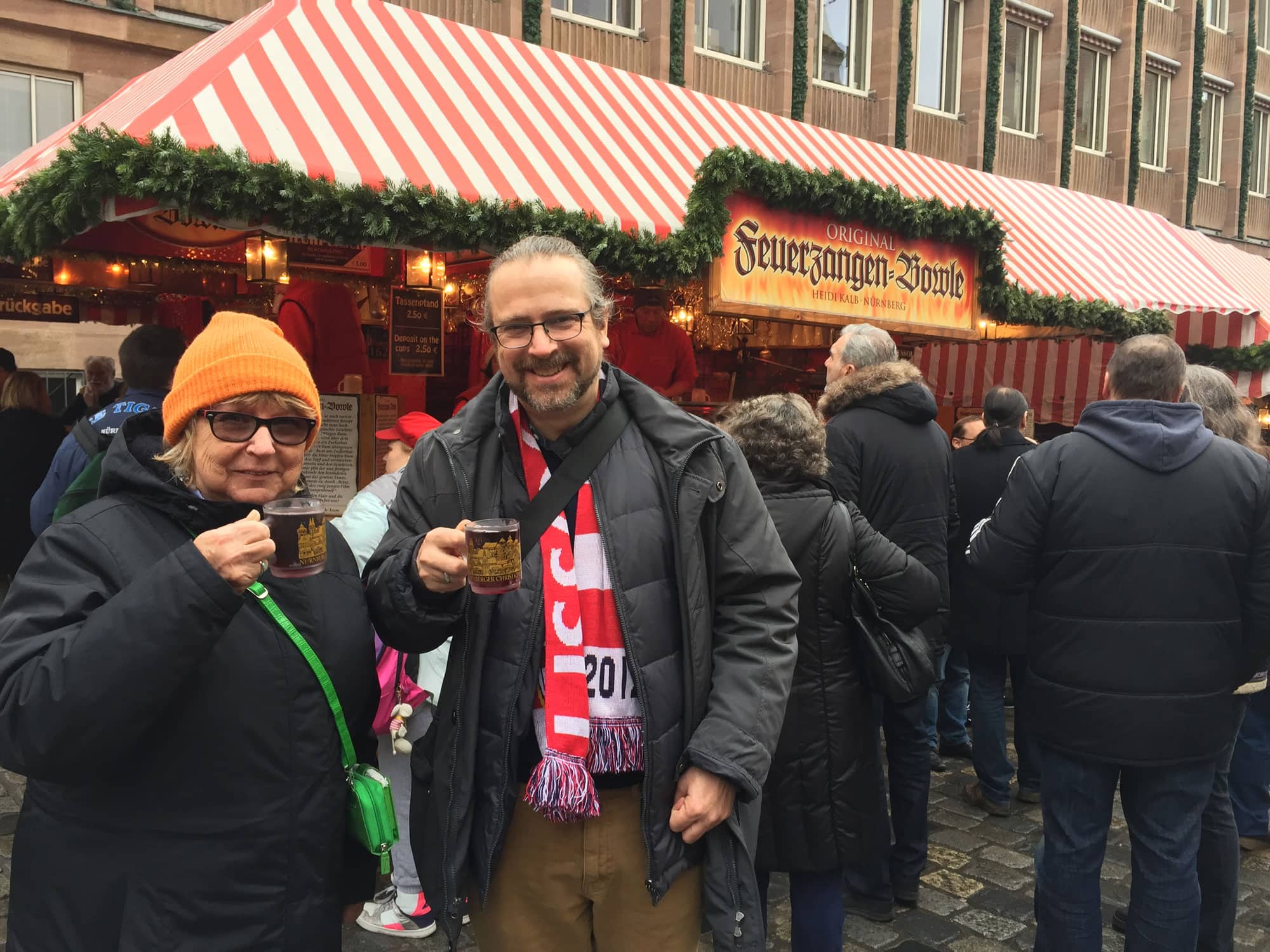