We have a lot of amazing music venues in America.

Not that you ever need a reason to take a trip, but traveling to see a show at one of the best destination music venues in America is up there. Sure, there are a million festivals worth driving or flying to, but these auditoriums and stages have truly stood the test of time and are worth a visit all on their own. Here’s a few favorites. 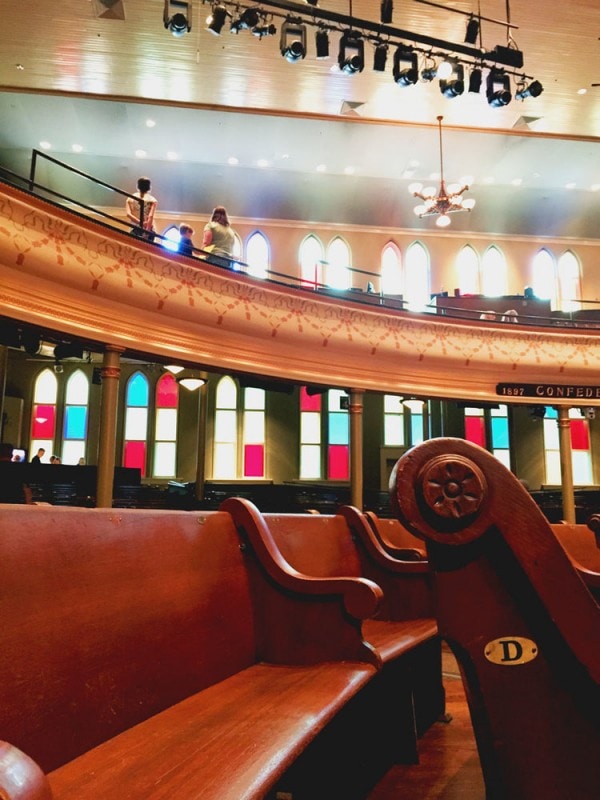 The Birthplace of Bluegrass, the Carnegie of the South, the Mother Church of Country Music—the Ryman goes by many names, but there’s an energy here that can’t be rivaled. The auditorium dates back to the 1880s, when businessman and steamboat captain Thomas G. Ryman vowed to build a great house of worship in the hard-partying city of Nashville. He completed the Union Gospel Tabernacle in 1892, and after his death in 1904, it was renamed the Ryman Auditorium. Of course, what really catapulted the Ryman on the national scene was the Grand Ole Opry, which found it’s home at the Ryman in 1943. For the next thirty-one years, legends like Elvis Presley, Hank Williams, Johnny Cash and Patsy Cline broadcast live from the Ryman every week. Though the Opry moved to a new location in 1974, it doesn’t quite have the Ryman’s je nais se qua. In 1994, the building underwent a massive restoration, returning the auditorium to its original splendor. Artists of all genres hail the Ryman as an unparalleled place to perform, and if your favorite musical act is set to play there, make that trip to Nashville happen! You will not regret it. 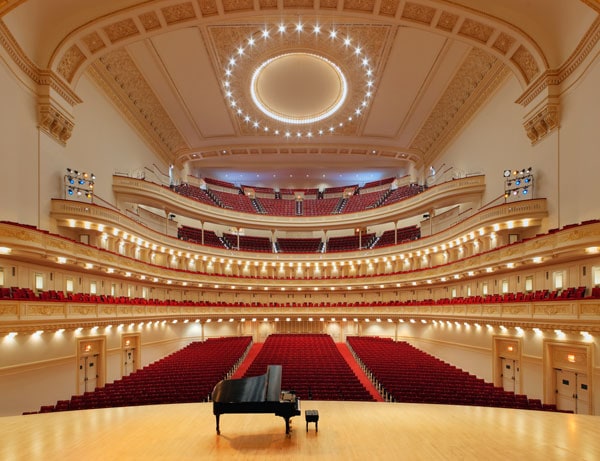 There are so many legendary places to see a show in New York—the Apollo, Radio City Music Hall, the Beacon Theater, King’s Theater and dozens more. But really, how can you compare anything to Carnegie Hall? Built by Andrew Carnegie in 1891, the six-story concert hall features three performance auditoriums as stunning as they are acoustically sound. The greatest musicians of the last century-plus have graced the stage of Carnegie Hall, including opera singer Marian Anderson, pianist Sergei Rachmaninoff, Louis Armstrong, Frank Sinatra, Judy Garland, and Bob Dylan. After years of financial strife, the building was set for demolition in 1960. Fortunately, the City of New York bought the historic building, saving Carnegie for generations to come. These days, you can still catch a concert there most nights—a very only-in-New-York experience. 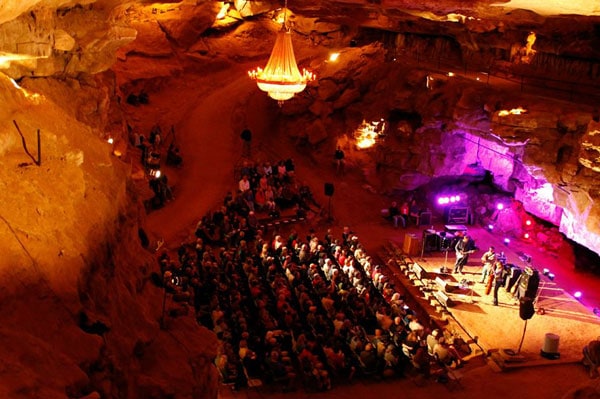 Maybe you’ve been transfixed by PBS’s concert series Bluegrass Underground. If you’re not familiar, here’s the scoop: the country’s most accomplished bluegrass musicians take the stage in the Cumberland Caverns’ Volcano Room… 333 feet underground! Even if you’re not sure bluegrass is your thing, it’s pretty difficult to not fall under the enchanted spell of the music’s reverberation in the stunning space. For a little more adventure, opt for an an all-in-one combo pass, which includes a walking tour with your concert ticket. You’ll get to explore the caverns, and still make it to the show on-time. 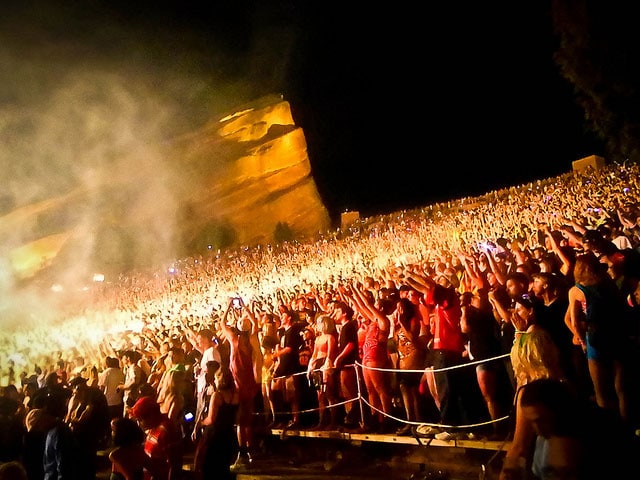 At 6,450 feet above sea level, Red Rocks Park is a unique transitional zone where the Great Plains meet the Rocky Mountains. Red Rocks Amphitheatre is a geological phenomenon – the only naturally-occurring, acoustically perfect amphitheater in the world. With three hundred-foot monoliths as your backdrop, how can a show not be great? Some notable performers? Hmm… how about The Beatles, U2, and of course, the Grateful Dead. Though it’s quiet in the colder months, the summer calendar is bursting with some of the biggest tours around. Never too early to start planning that summer road trip out west. Why not take in a show at theater literally designed by Mother Nature? By the way, if you like your Red Rocks with a side of yoga, they offer classes for you and 2,000 of your closest friends a few times every summer. Nice.

From the outside, this unassuming building doesn’t look like much. But inside? An iconic music venue. Originally designed as an Italianate-style dance hall in 1910, the building hosted dances and social events for decades (and even had a brief stint as a roller rink!). In the 1950s, the Fillmore turned its focus more toward live music, booking performers like James Brown and Ike & Tina Turner. With that, the Fillmore became an important stage that launched and fostered some of the greatest talent of the half century. In the 60s, the Grateful Dead, the Jefferson Airplane, and Santana at started at the Fillmore; in later years, it was the Dead Kennedys, Smashing Pumpkins, Chris Isaak, Queen Latifah, Brian Setzer Orchestra and many more. For a lot of bands, playing the Fillmore marked the “we’ve made it!” milestone. For music lovers, there’s few places that encompass the magic, ambience and history of the Fillmore. 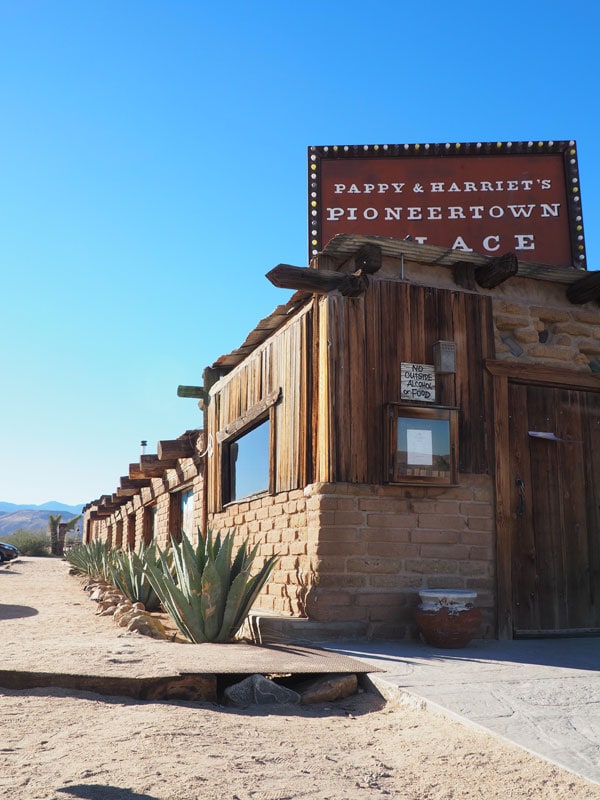 Every spring, hipsters breakout their festival gear and flock to California’s Coachella Valley. However, you’ll find amazing live music year-round at the legendary Pioneertown venue, Pappy & Harriet’s. This desert village exudes a serious gold rush era vibe, and though it’s not authentic, it feels pretty darn real. Hollywood investors founded Pioneertown in 1946 as a living, breathing western movie set. Building facades look like stables, saloons, and jails. However, on the inside, they’re businesses places actors, crew and their families would like to hang out— like ice cream parlors, bowling alleys, and a cantina. In 1982, Harriet Allen and her husband, Claude “Pappy”, turned that cantina into a one-of-a-kind venue, featuring a Tex-Mex restaurant, biker-friendly bar and an intimate stage where it’s not uncommon to see a show from a big name act, like Robert Plant, Vampire Weekend and Wanda Jackson. A trip to Pappy & Harriet’s is about a 45-minute drive from Palm Springs (and about 2 hours from LA, depending on traffic), but it’s a top notch desert adventure for any music lover.

Where’s your favorite place to see a show? Share in the comments! 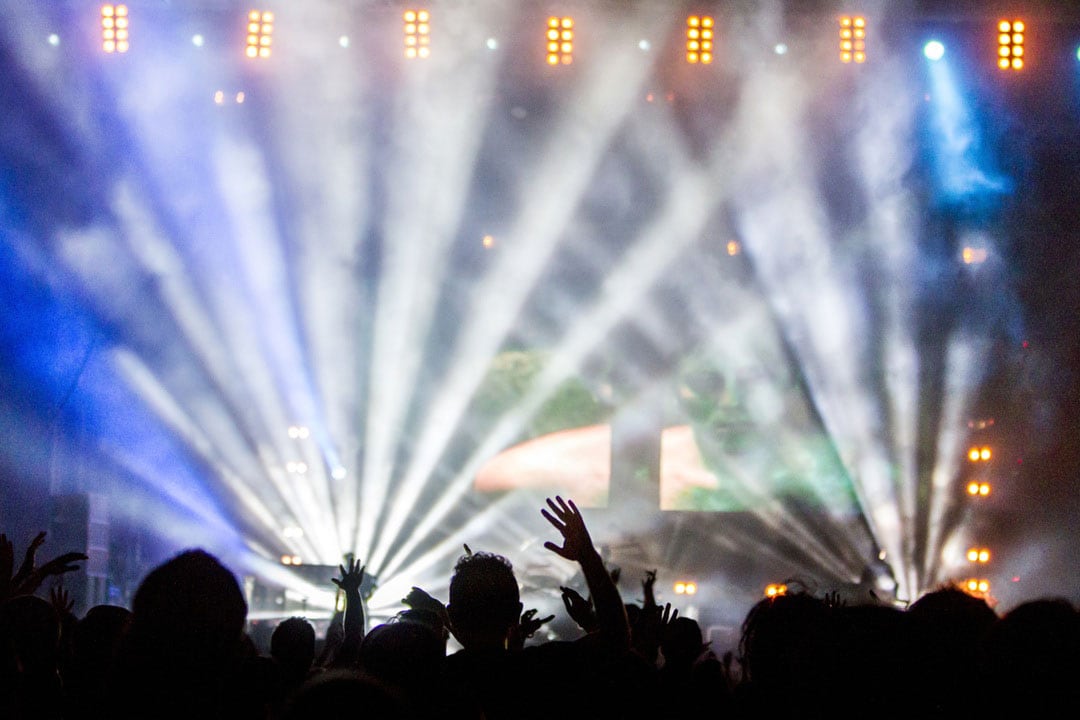