Is there a more iconic slice of Americana than the diner? I don’t think so. Whether it’s for a classic egg breakfast, simple flat-top grilled burger or decadent banana split, here are a few places you should belly up to the counter. 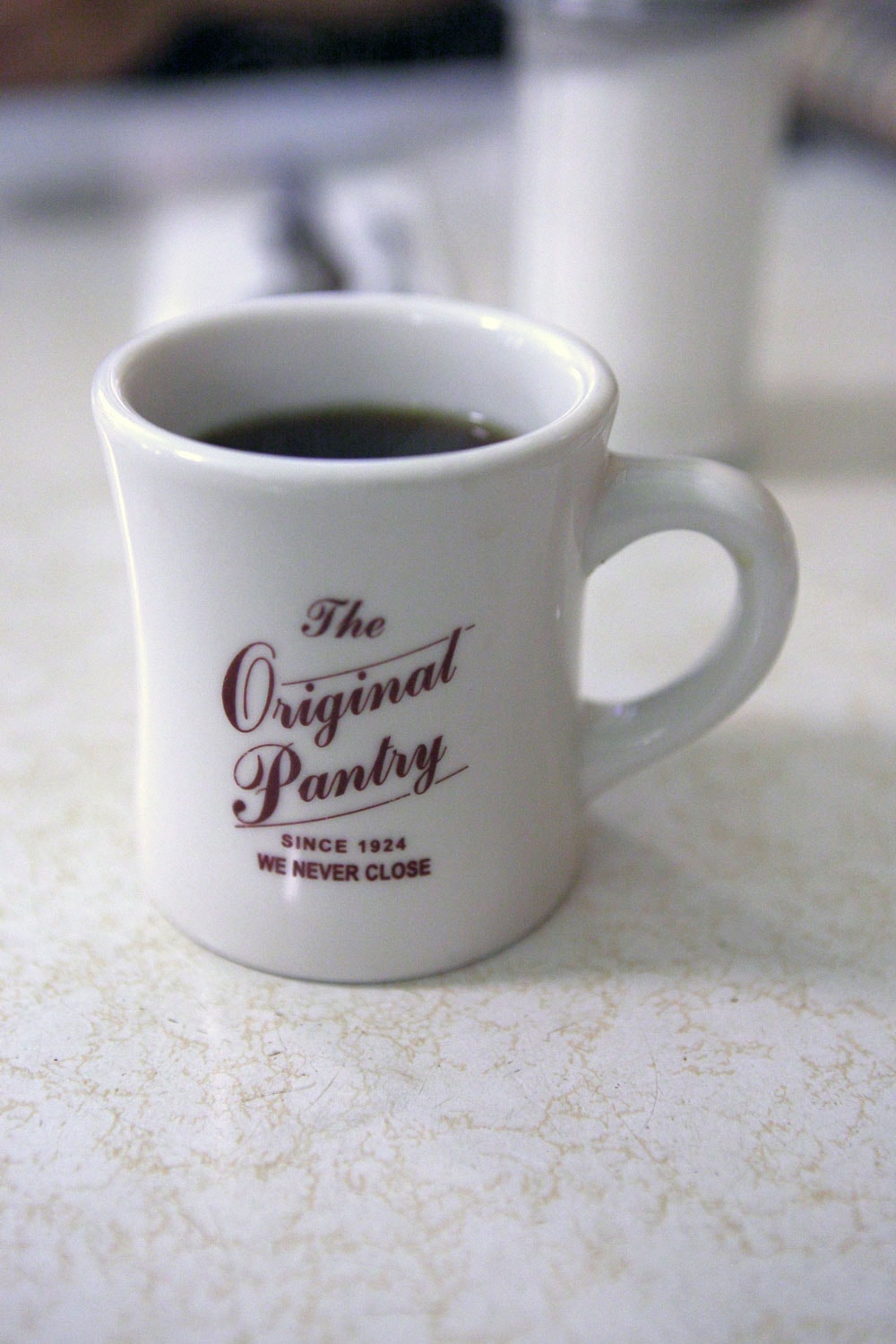 History: Established in 1924, The Original Pantry has spent nearly a century serving up generous portions of traditional American cuisine to LA’s movers and shakers—from politicians to movie stars and regular joes looking for a pile of pancakes served with a side of Jeff Goldblum or “that one guy from that one show.”

Claim to fame: Open 24/7, The Pantry famously has no locks on the doors. Current owner (and former Los Angeles Mayor Richard Riordan) boasts, “We never close. We’re never without a customer.”

What to Order: Nothing is fancy here, precisely why it’s so great. Order the biscuits and gravy; ham steak and eggs; or a side of pancakes. Coffee is 85 cents with any meal. 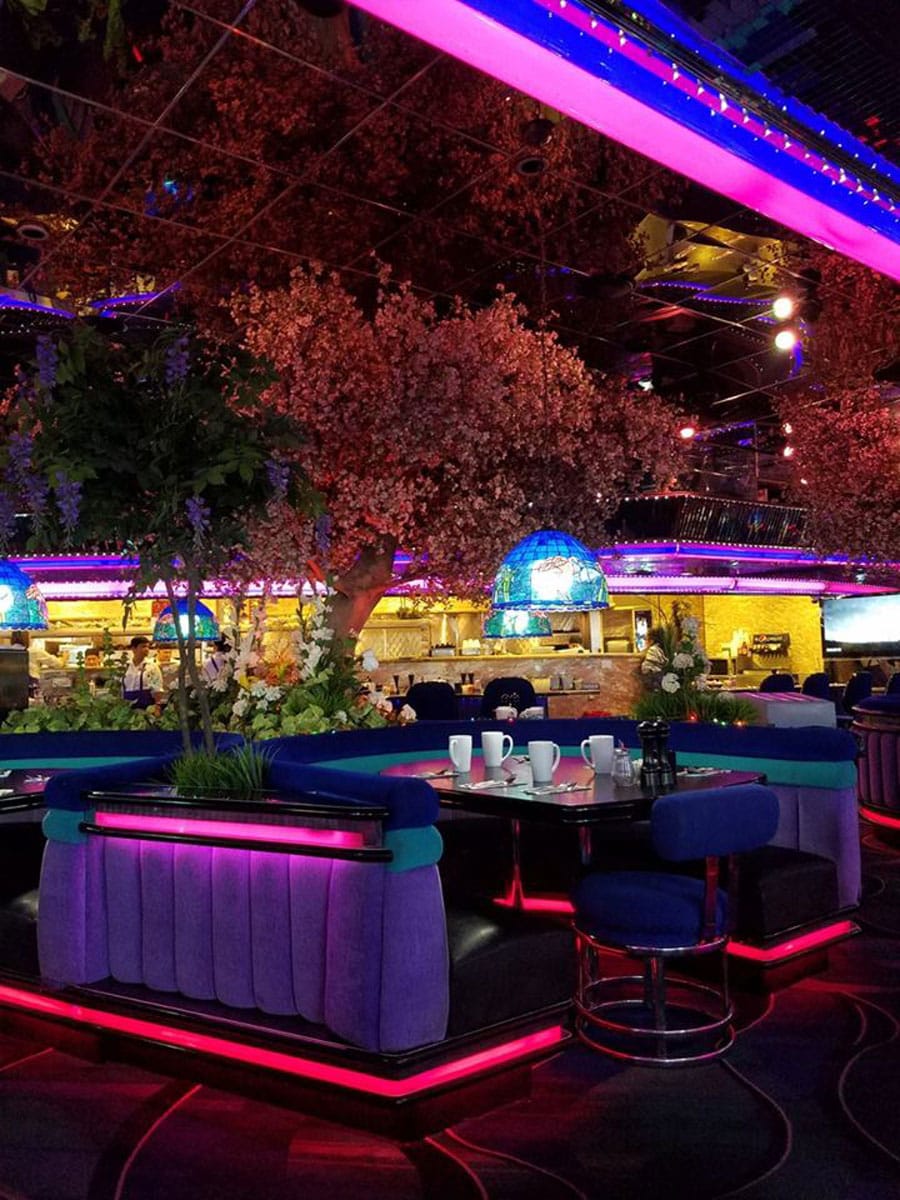 Where: The Strip – Las Vegas, Nevada

History: Open since 1972, this 24-hour diner and lounge feels like stepping back in time. Their huge portions are almost as well-known as their celebrity clientele, including Guy Fieri, and Penn Jillette.

Claim to Fame: The Fireside Lounge. This places operates around the clock, with waitresses donning floor length black satin gowns, no matter the time a day. There’s a sunk-in living sitting area around a delightfully cheesy indoor fire pit. Music videos that are so bad they’re good play on a handful of TVs (though it feels like much more due to nearly every surface being made of mirrors). No windows, hot pink neon lights and boozy atmosphere make this place feel like a 1980s limo in the best way possible.

What to Order: Weirdly enough, their fruit plate is stuff of legend. Bananas, strawberries, melon, pineapple and more is piled high, and served with fresh banana-nut bread and Peppermill’s creamy marshmallow sauce. Their flagship burger features a half-pound all-beef patty broiled to order, topped with cheese and bacon and served on grilled Parmesan sourdough. A signature bloody mary is good any time of day.

History: Currently in its 88th year of operation, Ruth’s Diner’s food is nearly as legendary as the woman who opened it back in 1930. A former cabaret singer, Ruth started out with a burger joint downtown Salt Lake City, serving all kinds (she especially had a soft spot for the women who worked in the brothel across the street). When the building was demolished in 1949, she bought a trolley car and moved the business to Emigration Canyon. Though she sold the business in 1977, Ruth lived in the apartment attached to the restaurant until the ripe old age of 94.

Claim to Fame: Nothing can really come close to Ruth’s legacy, but if something were to, it would be the gorgeous, leafy patio surrounding the trolley car. During the summer months, there’s often live music—not exactly what you’d expect from a diner, but this is no ordinary diner.

What to Order: Though the menu has expanded substantially over the years, many of Ruth’s favorites still make the cut. Try the chicken fried steak benedict or smoked salmon omelet at breakfast. One of her legendary 7oz burgers makes for a perfect lunch, as do the refreshing (and slightly healthier) salads. 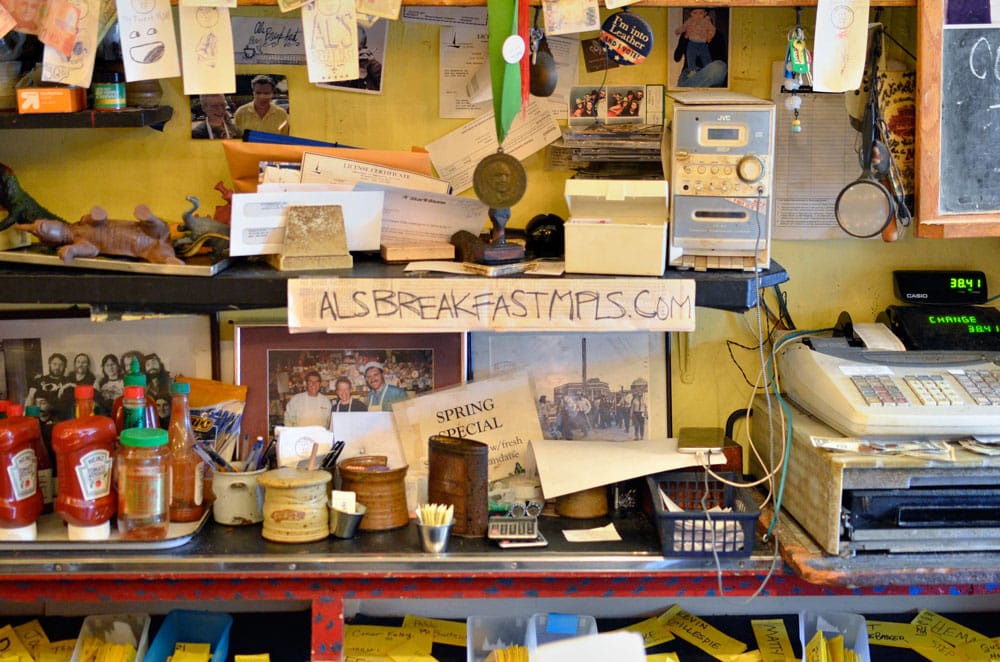 History: Opened by Al Bergstrom in 1950, this narrow, 14-seat counter breakfast spot is legendary on the University of Minnesota campus and beyond. In fact, they won a James Beard Award for America’s Classics in 2004. Everything is made from scratch and to-order. Don’t expect bells and whistles—there’s not enough room for a freezer, deep fryer, or microwave. Just a flattop grill and a lot of love and attention.

Claim to Fame: The line. Show up early for your best bet at cutting your wait time. You’ll end up spending a portion of the wait standing directly behind someone as they eat their breakfast at the counter. Once you’re seated, you may at some point be asked to move down a stool or two to make room. Yes, it’s a little weird, but it’s all a part of the Al’s experience.

What to Order: Blueberry pancakes with real maple syrup. Other notable items include hand-shredded hashbrowns, and omelets—including the West Bank, made with Mushroom and Onions, topped with Strawberries and Sour Cream. What??? 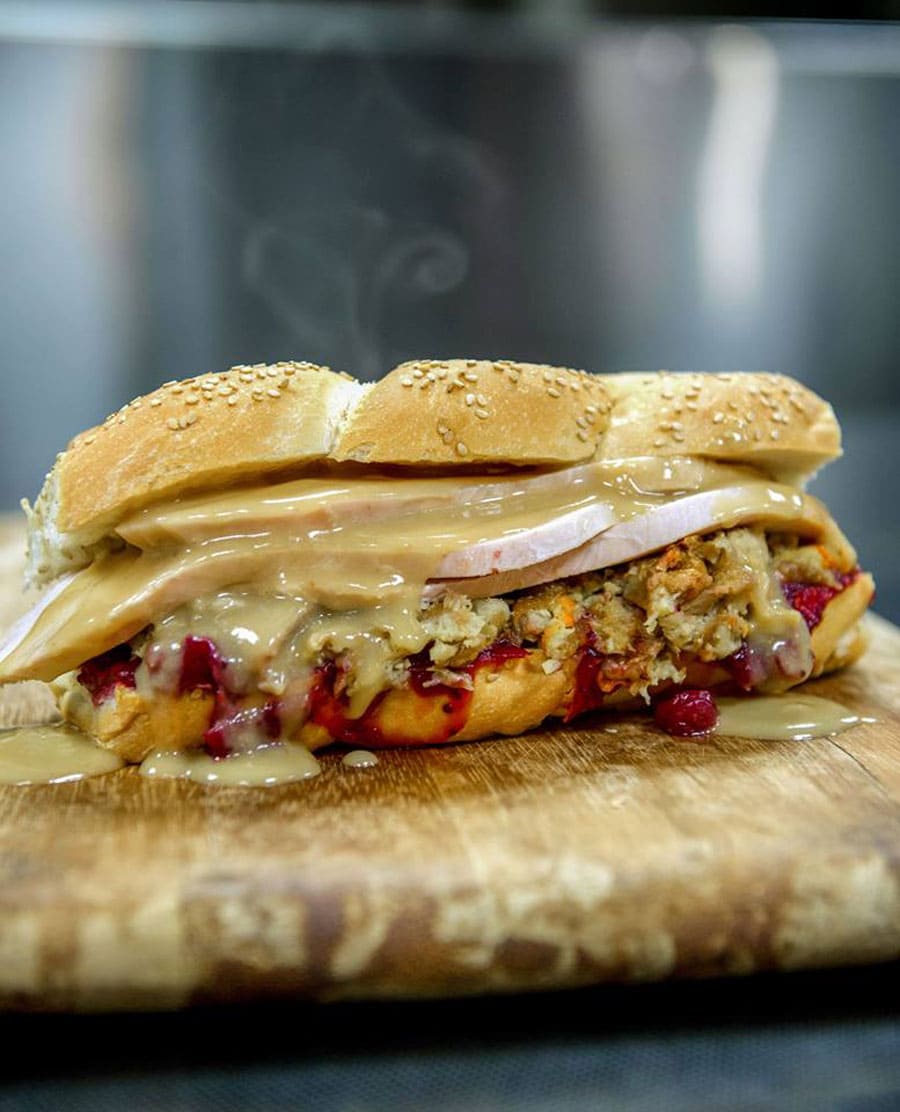 History: This is one of those places that’s “only” been open a little over two decades, but feels like it’s been around forever. Owner and chef Jay Hajj, originally from Lebanon, kicked off his career in the restaurant industry washing dishes at age 13. He later became a line cook, then opened a falafel shop in the late 1980s. At 25 years old, he purchased a struggling called Mike’s City Diner. The rest is history.

Claim to Fame: Mike’s is a favorite of Food Network’s Guy Fieri, as well as President Clinton (well, probably before he went vegan a few years back).

What to Order: Though Mike’s is known for its classic American breakfasts, chowder and filling sandwiches (hello, tuna melt!), their roast turkey put them on the map. Try Mike’s Famous Pilgrim sandwich, made with turkey, stuffing and cranberry sauce, and served with fries and a pickle. 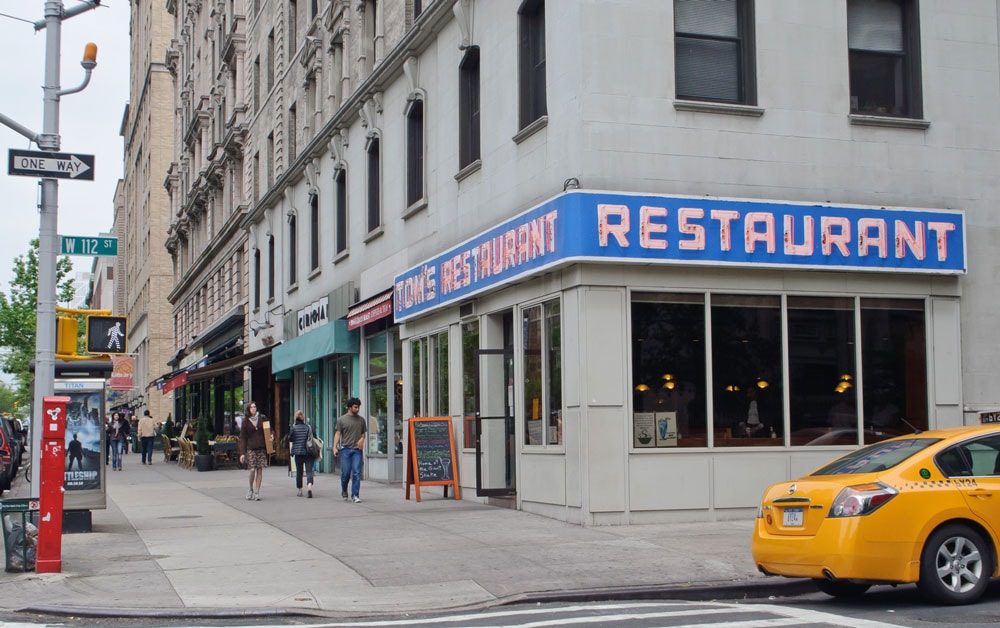 Claim to Fame: The restaurant’s neon-lit exterior was used as the gang’s favorite coffee shop, Monk’s, on Seinfeld. The interior shots were all filmed in an LA studio, but we can pretend, right? It’s also the diner that inspired Suzanne Vega’s hit song, “Tom’s Diner.” Good luck getting that out of your head.

What to Order: Channel your inner Elaine Benez and order a big salad—like the chef’s or Greek salad. Their sandwich offerings will make your head spin, but can really go wrong with a classic meatloaf sandwich or BLT? They also serve up yummy pie, cheesecake, and banana splits if you somehow managed to save room for dessert.

We’re ready for ya!

History: Old meets new at this iconic dining car. The diner has changed hands six times since opening, and is currently operated by Greg Mitchell and Chad Conley, two friends who met working on an organic farm in 2013. You’ll find diner classics made with ingredients you’d expect from young cooks with experience working at an organic farm (imagine that!). Pancakes served with real maple syrup, hash made with 100 percent grass-fed beef, and homemade banana bread—you can’t go wrong.

Claim to Fame: Originally built in Lowell, Massachusetts in 1927, the car has been in Biddeford its entire life and is one of two Pollard cars remaining in America

What to Order: Open for breakfast and lunch, the menu is paired down to the best versions of show-stopping plates. Yes, it’s minimal, but everything is made with extreme care and local ingredients when possible. Bon Appetit called the Palace’s tuna melt “the greatest [they’ve] ever tried.” Served on buttered challah with house-made pickles, its defining feature has to be the iceberg lettuce, cut crosswise into a ¾-inch-thick slab. 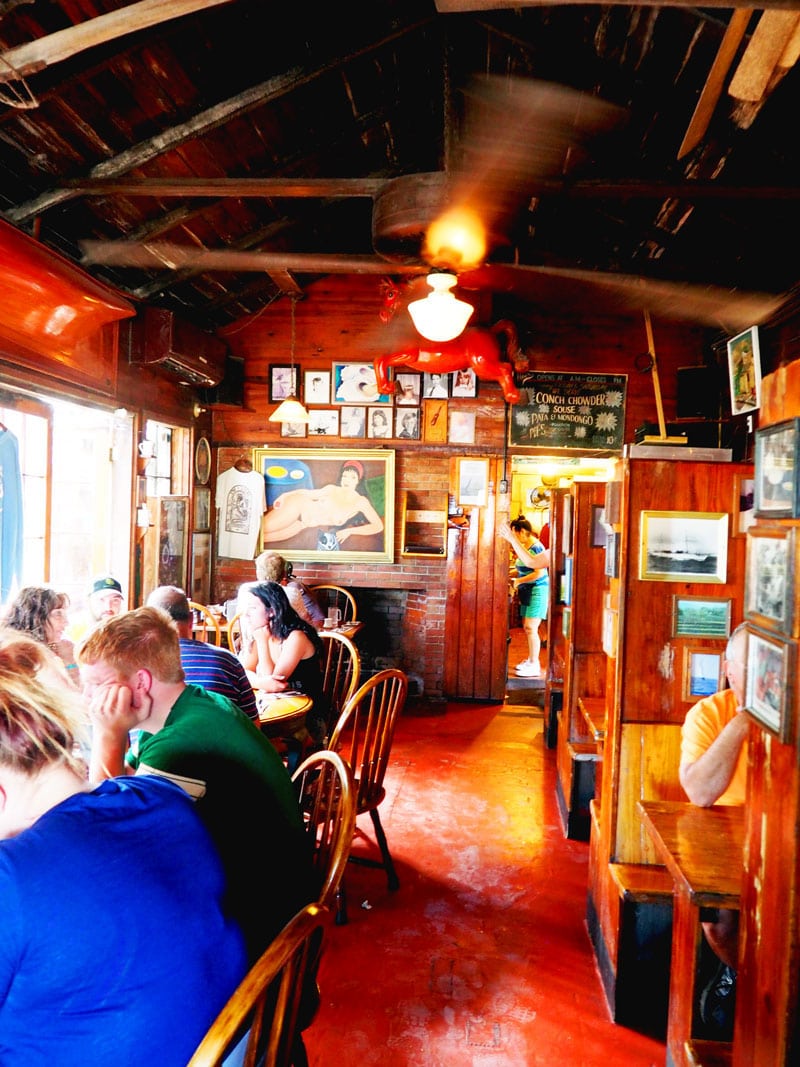 History: Open since 1909, this place feels like it’s been here forever. With its warm wood interior, filled with memorabilia and maritime antiques, you almost expect to see Ernest Hemingway having a little hair of the dog in one of their booths.

Claim to fame: The patio is super pet friendly, with locals toting their pooches along for breakfast, lunch or dinner.

What to Order: These guys do carbs right. At breakfast, their homemade banana or coconut bread is not to be missed. Lunch and dinner offers specials made with locally caught fish, like grouper, hog fish or even stone crab, depending on what’s fresh and available.

Where: South Side, Chicago

History: Talk about entrepreneurship! In 1892, young Irish iron worker John Daley, saw untapped potential on Chicago’s South Side. The University of Chicago, World’s Columbian Exposition and the Rapid Transit Line were all under construction… and workers needed a place to eat. Why not open a restaurant and capture that hungry, captive audience? Over 125 years later, Daley’s still draws hungry patrons from the neighborhood and beyond.

Claim to Fame: It’s allegedly the oldest restaurant in Chicago… though that depends if you’re counting from its original iteration in 1892, or when the current ownership purchased the place in 1918, …or when the current location was built in 1932. At any rate, it’s a Chicago icon.

What to Order: Going for breakfast (which is served all day, by the way)? Try one of their filling skillets—hashbrowns topped with two eggs, and all sorts of toppings, like sausage, sautéed veggies, cheese and more. Waffles served with a side of chicken wings are always a huge hit. At lunch, patrons rave about the patty melt. Daily specials include things like chicken and dumplings, and braised oxtail stew. 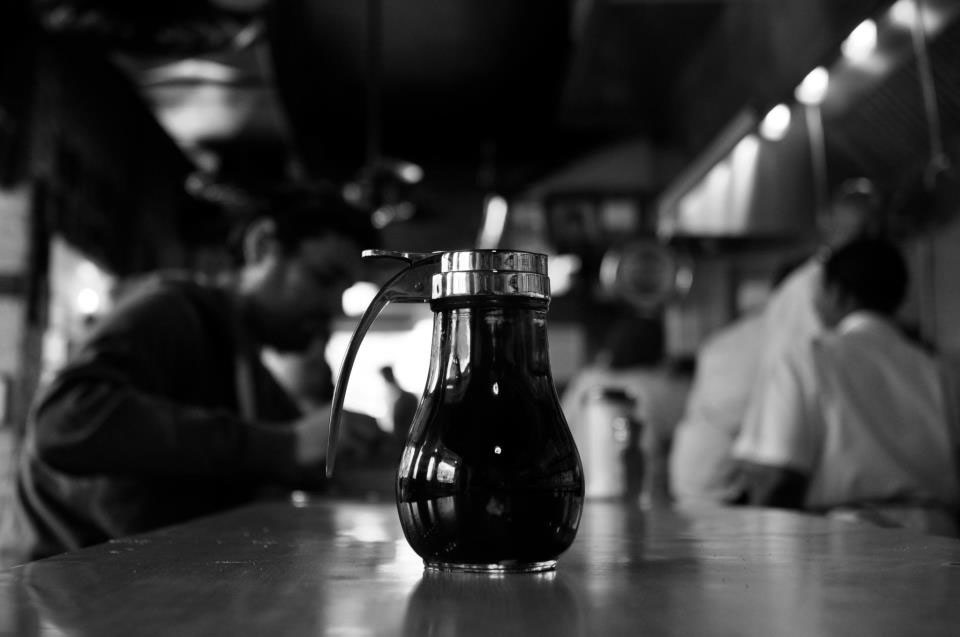 History: After years of saving tips as a shoeshiner, Lacey C. Wilson Sr. had enough money to make his dream a reality: opening a restaurant that felt like home. He and his wife Bertha opened a two-seater “restaurant” on the corner of Florida Avenue and 11th Street in Northwest D. It has been almost 70 years since the Wilson family first established The Florida Avenue Grill in 1944. The Grill has stood the test of time, and has grown to become the world-famous Florida Avenue Grill.

Claim to Fame: It’s the oldest soul food restaurant in the world.

What to Order: For breakfast, go for the fish and grits special. Your choice of fried catfish or salmon cakes served with grits and a biscuit. Dinner, served from 11am until close, is all about hearty soul food. Think pig’s feet; smothered, fried pork chops; chitterlings and more, served with sides like collard greens, yams, baked mac and cheese. 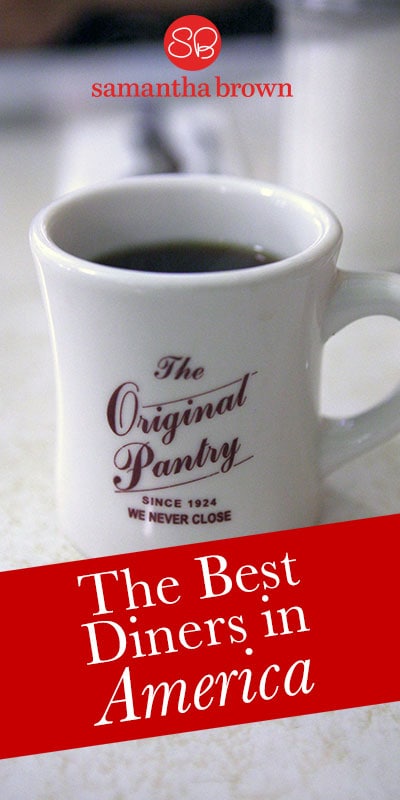 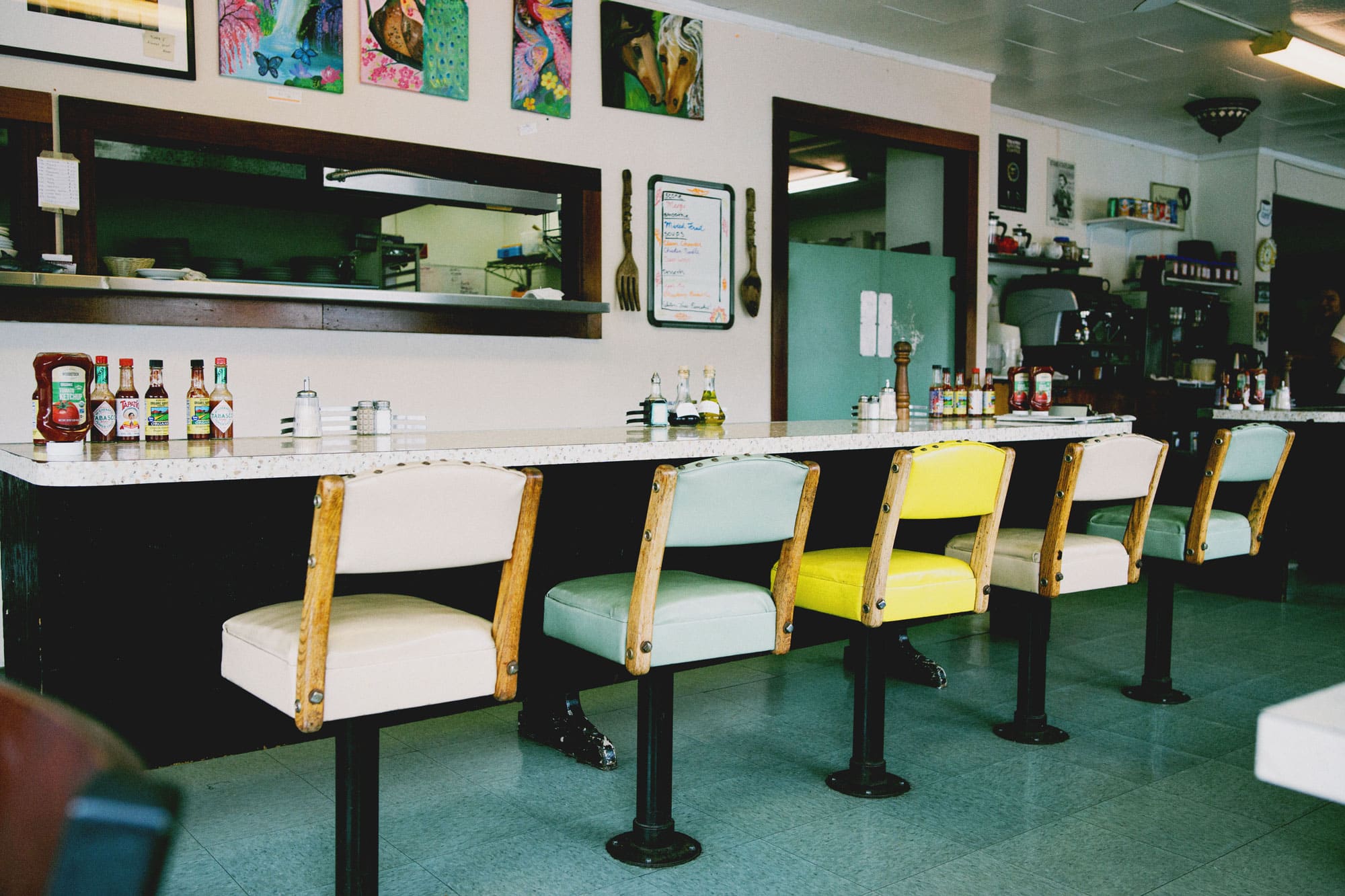