This elegant New England beach village has been drawing vacationers since the mid-19th century. Its ample supply of Victorian-era homes, ranging from oceanside mansions to prim cottages, make it easy to imagine life before 24-hour news cycles, social media, and deadlines. The thought of replacing my cell phone and laptop with a book, sunscreen, and a towel makes me very happy.

Start each day with a stroll to the public beach at Napatree Point. This is a pristine stretch of sand with few amenities and is only accessible by foot, so the farther you walk, the more quiet and private the beach becomes. Walk until you can’t hear civilization anymore, stake out a piece of the beach and enjoy the luxury of nothing more than warm sand to lie on, a cool ocean to swim in, and the company of a few seagulls.

There is a fee for entry, which includes nearby parking, umbrellas, and chairs to rent, and has lifeguards during the season.

Generations of vacationers have been eating there since it opened its doors in 1916. Even though the dining room has been updated over the years, it still retains enough of its original character to be a link to Watch Hill’s past. Grab a table outside so you can people watch and contemplate what makes a perfect club sandwich. More information can be found on their website.

Reputed to be the second oldest carousel in the US.  This 19th-century amusement has been thrilling children since it opened in 1879 and even the most 21st century 10-year-old are going to do their best to collect metal rings from the dispenser each time they go around the circle.  The rider who is lucky enough to wind up with the single “Brass Ring” hidden amongst the iron ones gets another free ride on the carousel and bragging rights amongst their friends and family.

A salty yet pristine Grande Dame, The Ocean House stands where the original hotel entertained visitors from 1868 to 2005.  In the early 2000 the hotel’s original wood frame construction was no longer safe to meet 21st  Century fire codes so it was closed and torn down.  In 2010 the “new” hotel opened, retaining much of the charm of the old hotel (it’s a near-perfect copy of the original when viewed from the street) while still having luxurious modern amenities.  Stop in the lobby to admire the grand stone fireplace that remains from the previous structure and hotel employees will proudly point out some of the design elements that were repurposed for the new building to maintain its soul.

Dining there is also quite a treat, especially at the main restaurant Seasons, just make sure you make dinner reservations in advance. Visit the Ocean House website for more info. 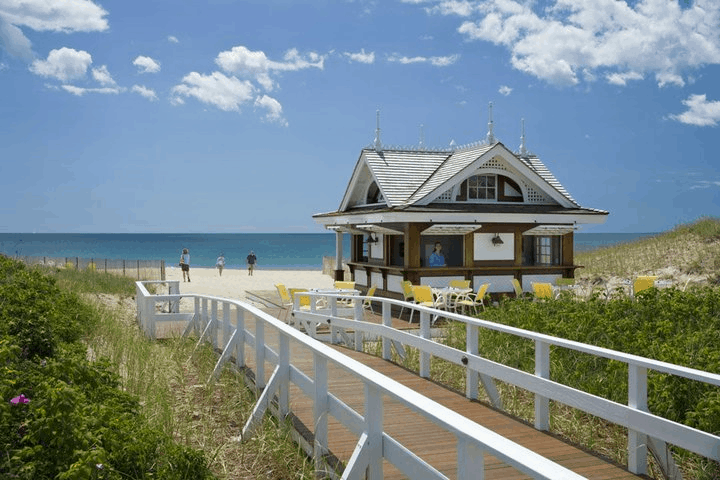