I’ve only been to Bologna once, but it left a huge impression.

At that point, I had been to the great cities of Rome, Florence, and Venice. Bologna is different. It has crowds, but not at “horde” level. It allowed me to experience Italian everyday life, relaxing in cafes as the sound of locals chatting in Italian and clinking espresso cups with tiny spoons washed over me.

While there’s more of a tangible realness in Bologna, this city boasts all the art and food we Americans love from our sometimes once-in-a-lifetime Italian vacation. And yet being there is not demanding at all. Benvenuto to your new favorite Italian city. 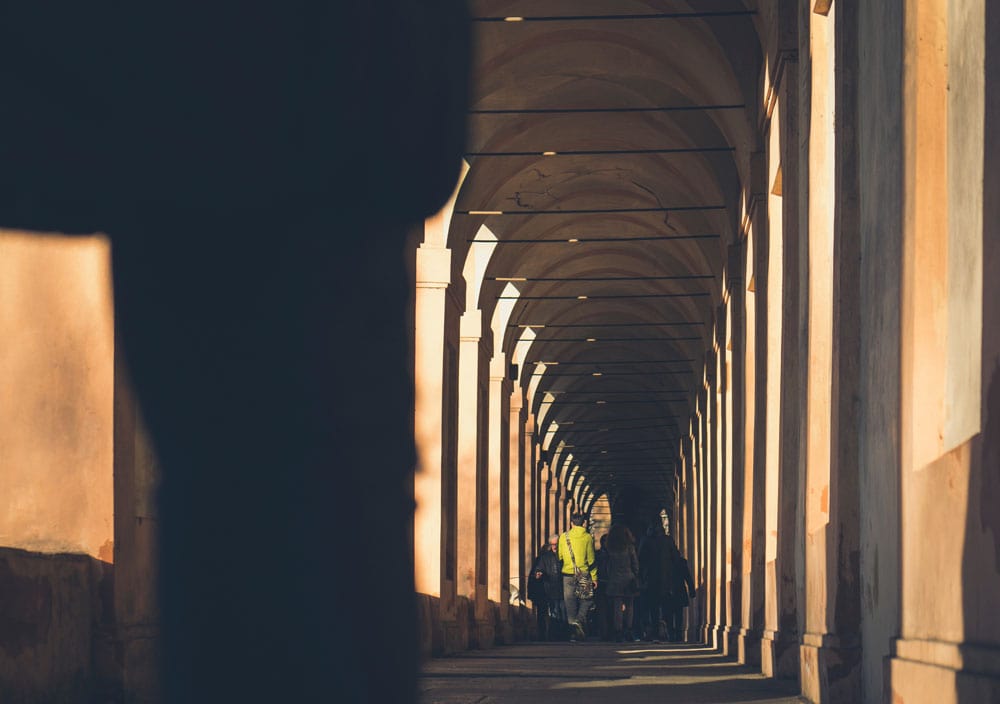 Any time of year is great in Bologna, partly because the weather doesn’t really matter so much. In fact, Bologna is the city with the longest arcades in the world—about 40 km of covered marble porticos. Is it raining? Who cares, you barely even need an umbrella! Hot as heck? Not under the arcades, which remain cool, even in the dog days of summer.

And speaking of the summer, since Bologna is a bit off the tourist radar, it’s a great option for visiting during high season without totally insane crowds. 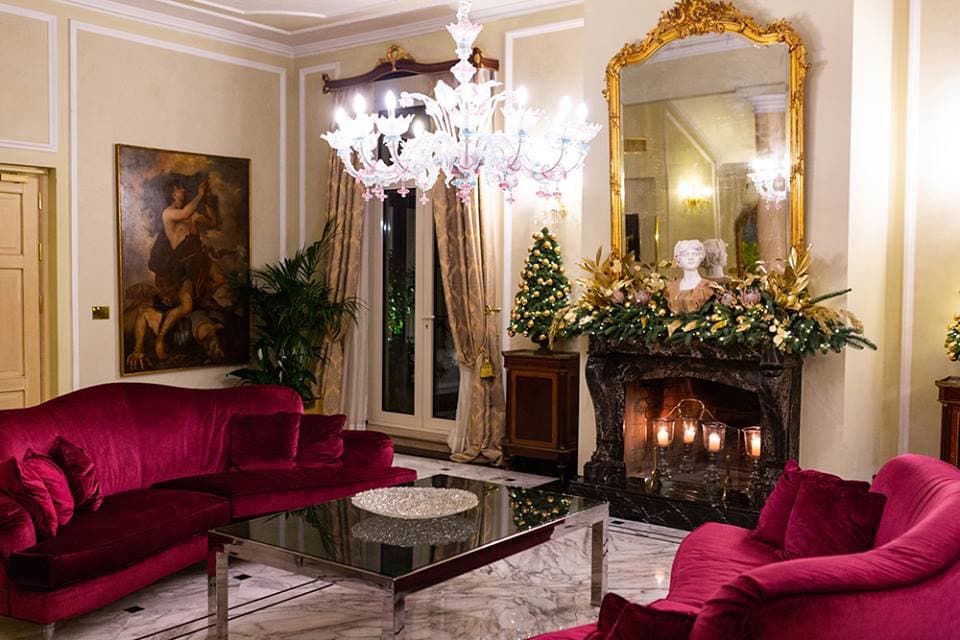 From elegant hotels to charming apartments, there’s no lack of great accommodations in Bologna. If your budget allows for a little grandeur, drop your bags at the Grand Hotel Majestic gia Baglioni, the grande dame of Bologna.

For something nice but budget-friendly, Hotel Metropolitan checks all the boxes. With stylish common areas, simple but yummy breakfast, clean and modern rooms, and just a few steps off Via dell’Indipendenza, you’re in the heart of it all. 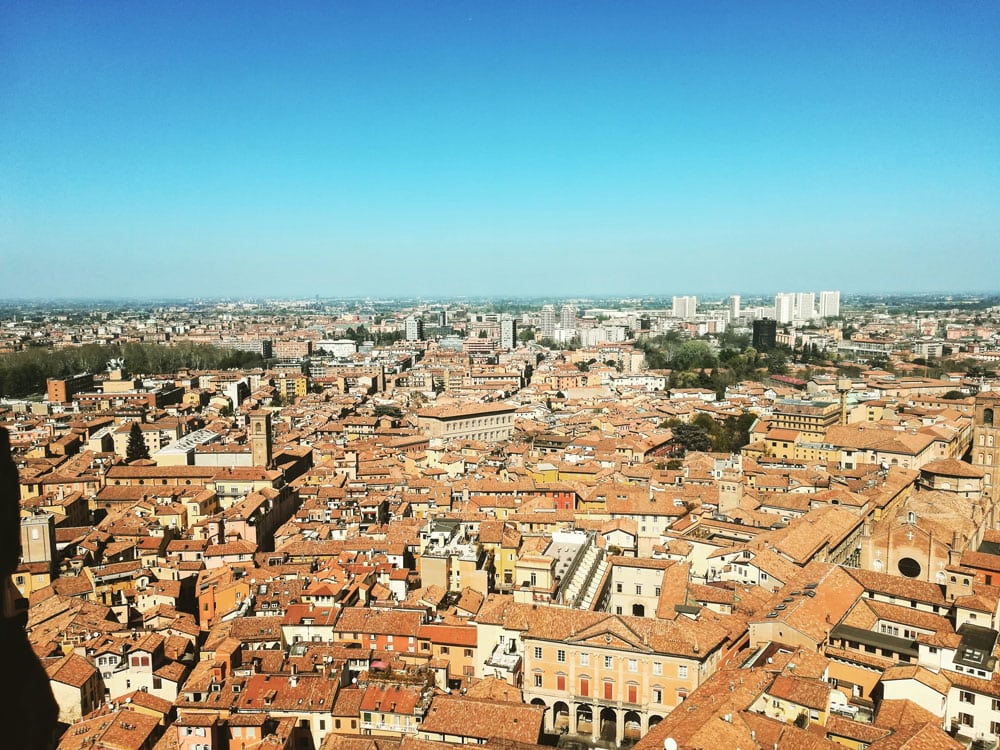 Bologna is known for its towers—21, to be exact. However, this is just a sliver of what used to dot the skyline. It’s said during the Middle Ages; that Bologna had about 180, largely thought to be used as a sign of wealth more than anything. Talk about keeping up with Medicis!

Today, the Asinelli and Garisenda towers are the city’s most famous, with heights of 97 and 48 meters, respectively. Though that tower in Pisa gets all the press, the Asinelli Tower tilts 2.4 meters and is considered the highest leaning tower in the world. For a few bucks, you may climb the Torre Asinelli for a fantastic view of the red-roofed city. Students beware: Legend has it that anyone who climbs the tower before graduating will not get their degree. 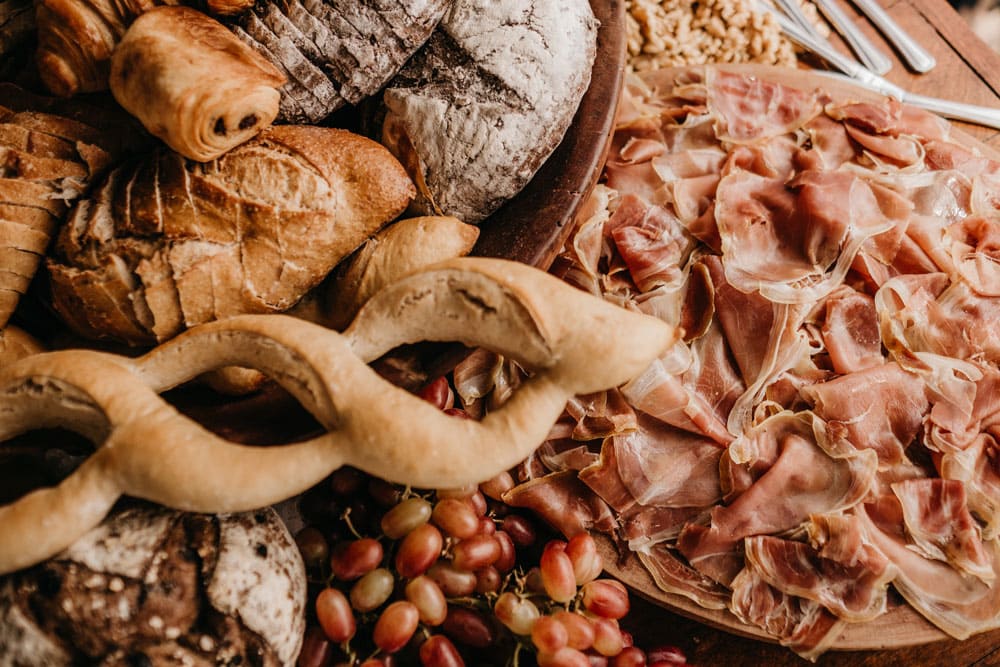 One of Bologna’s many nicknames is La Grassa, which means “the fat one.” This is the home of many iconic Italian eats, including mortadella, tagliatelle, ragù, tortellini and fritto misto. Fellow food lovers… are you packing your bags yet?

È cucina
Do you hear “prix fixe menu” and automatically hear ca-ching! Not at È Cucina. This restaurant concept from chef Cesare Marretti offers three surprise menus daily—one for meat-eaters, one for pescatarians, and one for vegetarians. A four-course meal costs 20 Euros and is really, really delicious.

Ristorante Da Cesari
I don’t know about you, but if an Italian grandma offers to make me dinner, I am going for it! This family-run restaurant still has nonna rolling out fresh tortelloni stuffed with ricotta, topped with freshly shaved truffles; green ravioli stuffed with rabbit, served with butter and smoked goat cheese; and delicious homemade panna cotta.

Tamburini
Welcome to wine, cheese, and meat heaven. Open for over 80 years, this iconic shop is an experience not to be skipped. If you prefer, grab a seat at their wine bar for more of a traditional restaurant experience.

Museums and points of interest: 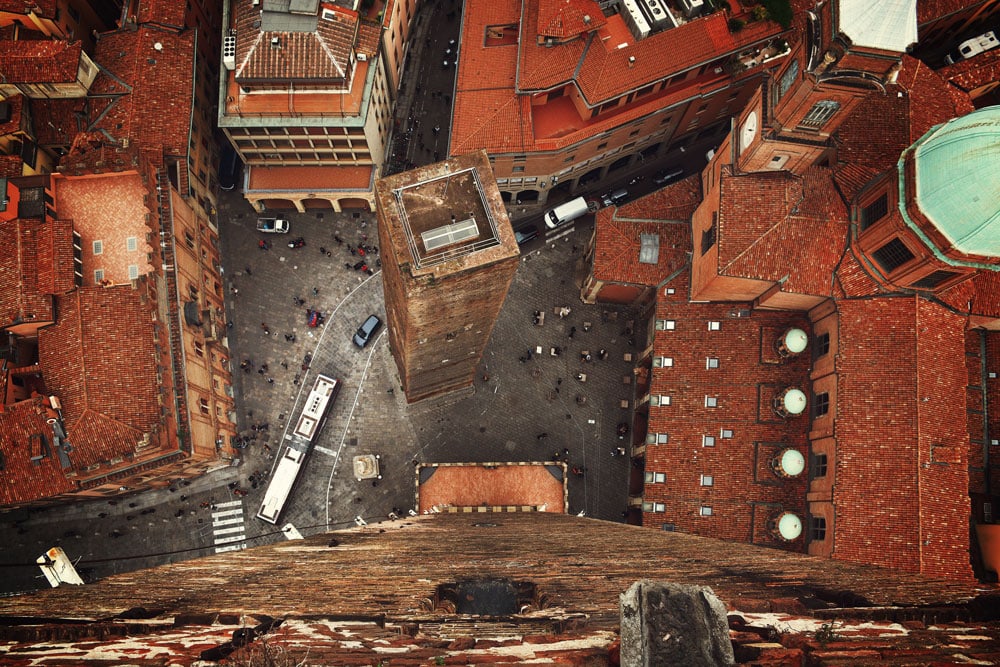 You’ll find all sorts of museums in Bologna, from architecture to modern art. If you love visiting many museums and historical sites, you may want to look into the Bologna Welcome Card. For 25 euros, you can score entry to many museums and churches, plus access to walking tours and more. It doesn’t take long for those costs to add up, not to mention that you won’t feel pressure to “get your money’s worth” at places that don’t really pique your interest.

A few worth mentioning:

The MAMbo – Museo d’arte contemporanea
When you think of Italian art, great painters like Davinci probably come to mind. However, the contemporary art collection at MAMbo is a nice change of pace. You’ll find Italian abstract art from the 1950s, as well as temporary exhibits from artists like the Argentinean-Israeli Mika Rottenberg.

Bologna’s Gothic Basilica
Talk about patience… this architectural masterpiece which, despite being started in 1390, is still unfinished! Fun fact: its 70-meter sundial was instrumental in discovering the anomalies of our calendar and lead to the decision to create the leap year.

The Teatro Anatomico
This 17th-Century medical theatre served as a place where people could watch bodies being dissected. Today, it houses a fascinating science museum. 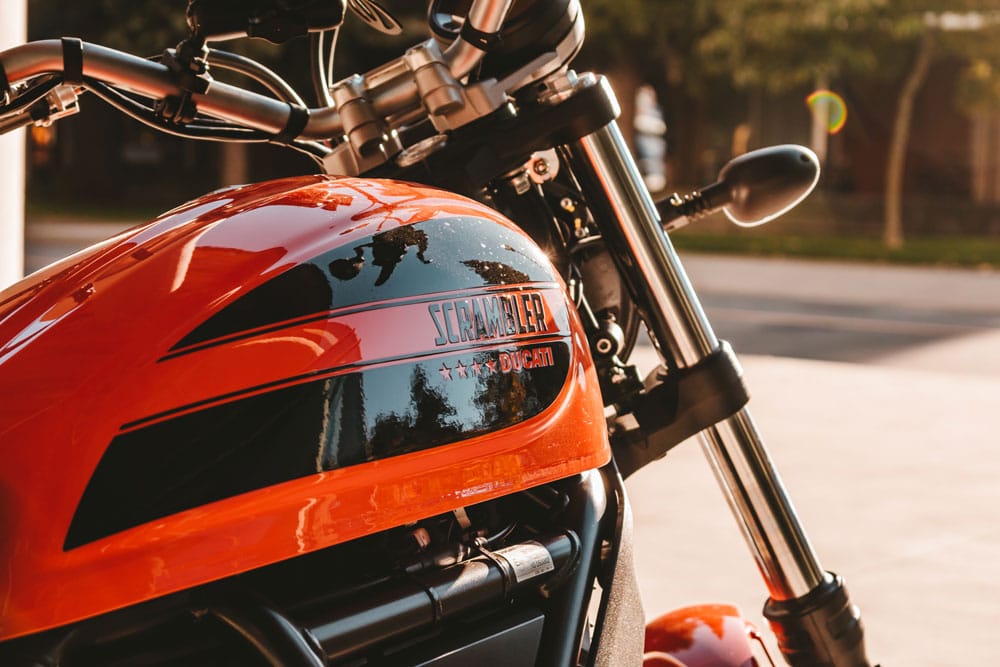 Did you know Bologna is the hub city for both Ducati Motorcycles and Lamborghinis? I know, I know… between the food and fast modes of transportation, it’s astounding this city isn’t on more travelers’ radars.

Ducati does a factory tour, allowing guests to watch an active assembly line and peruse the Ducati Museum. Oh, and if you just want to check out the museum, it’s free with the aforementioned Bologna Welcome Card. Learn more here.

Located about 40 minutes from Bologna, the Lamborghini Museum also offers factory tours, where you can learn all about how the V12 Aventador is made—from the crafting of interiors to the engine and transmission. The guided group tour takes about 45 minutes and includes access to the Lamborghini Museum.

Bologna is so close to many of Italy’s most notable destinations. Staying here puts you within an easy commute of the following places.

Florence: 35 minutes via train
Why go: The Duomo, the Uffizi Palace, the bridges, the Piazza della Signoria, the Boboli Gardens, and David, the most beautiful man to be carved in stone… need I say more? 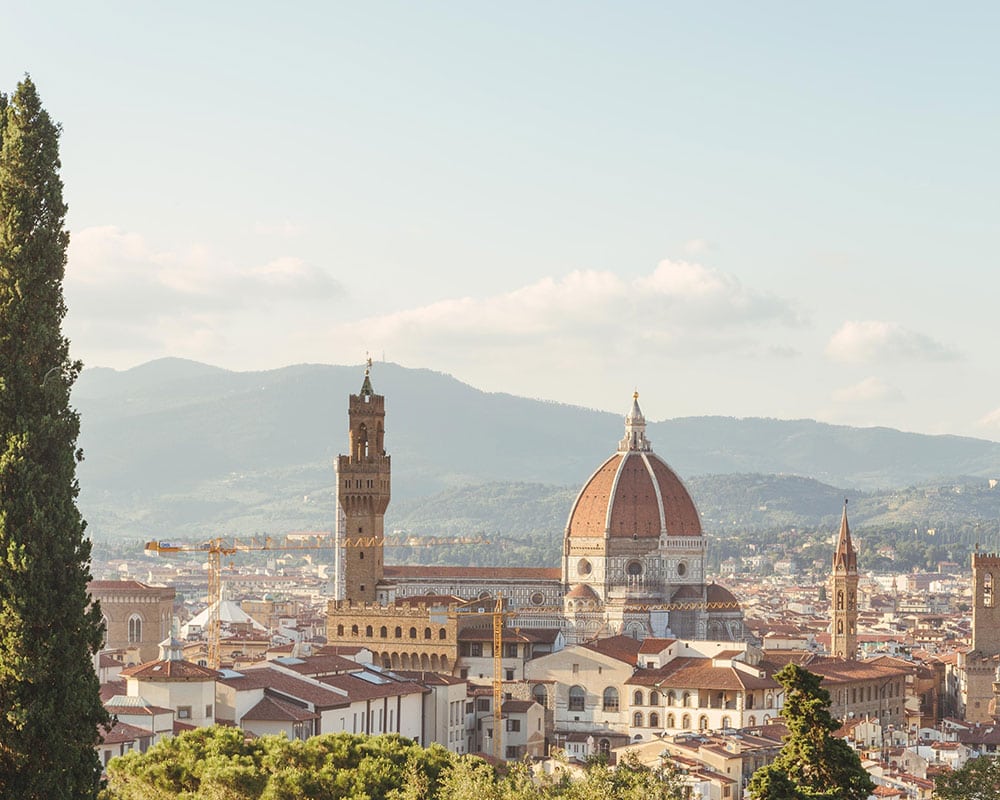 Venice: 1.5 hours via train
Why go: It’s one of the most storied and romantic cities in the world—one of a kind. 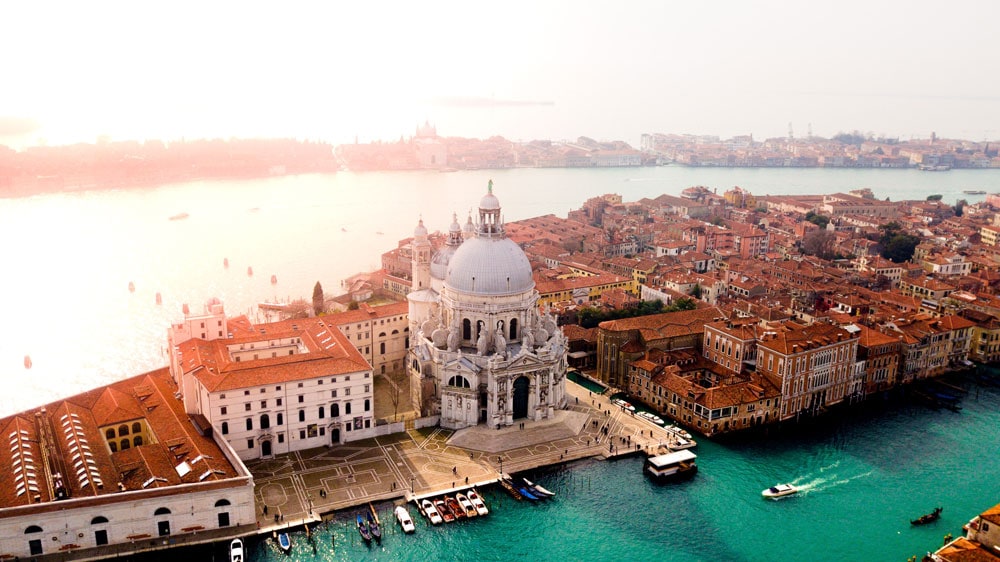 Milan: 1 hour
Why go: The Duomo Milano, the Last Supper (book ahead or good luck!), Sforza Castle, and of course, the fashion! Check out the Galleria Vittorio Emanuele II—the fanciest mall I’ve ever had the pleasure of window shopping in. 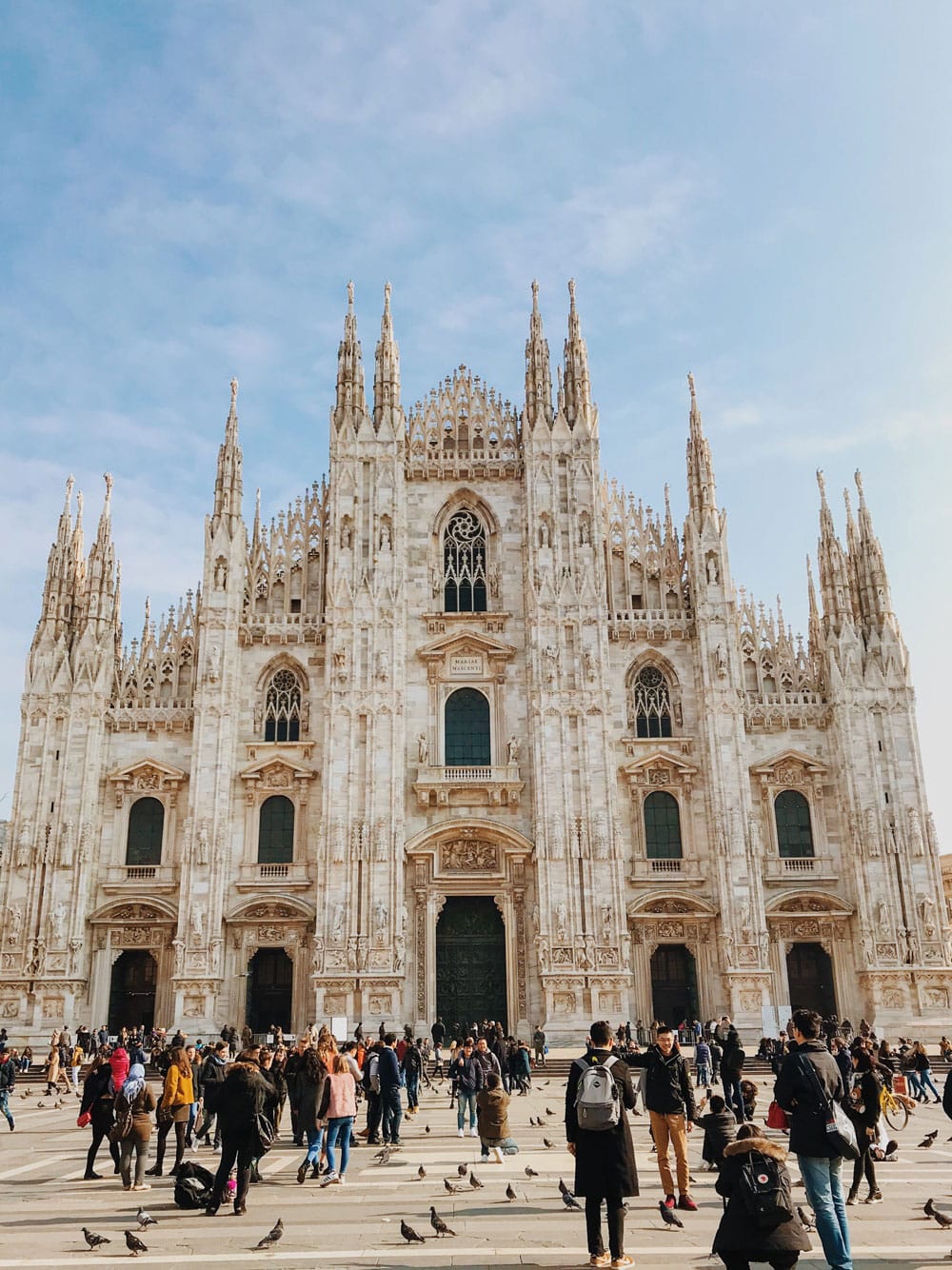 Pisa: 2 hours
Why go: I don’t know if four-hour roundtrip is worth it for the iconic “I’m holding up the tower!” tourist photo. But it may be to you, and who am I to judge?

Parma: About an hour by train.
Why go: It’s the home of Parmesan cheese. Why not try a half or full-day food tour?

Modena: 35 minutes
Why go: The Enzo Ferrari Museum and the birthplace of the world’s best Balsamic vinegar? Sign me up. 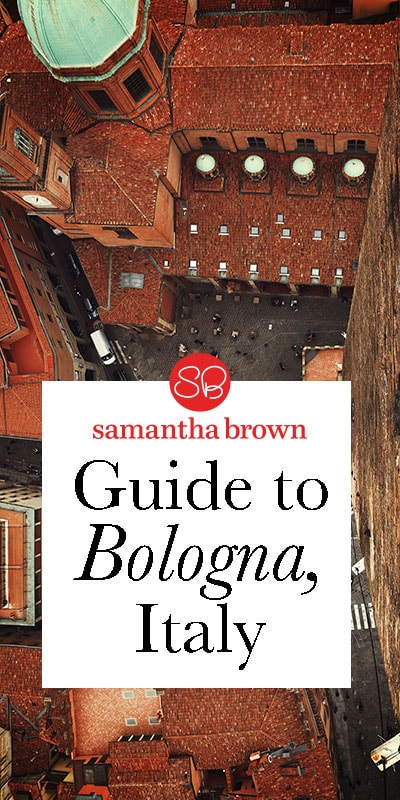