Detroit is a city in transition.

Over the past 60-some years, the population dropped from 1,850,000 to less than 700,000. I’d be remiss to not mention the severe urban decay—it’s said that there’s over 80,000 abandoned buildings within the city. All this might bring you to a bleak assessment of the Motor City.

I beg to differ.

Detroiters are a resilient, resourceful bunch. Always a city of innovation and heart, that spirit remains even amidst the chaos. That’s especially clear when it comes to the food scene. From classics like coneys and square pizzas to urban farming and delicious ethnic eats, Detroit has character and lots of fight. And there’s something about that spirit that draws me in. I’m not alone: In fact, the New York Times named it one of 2017’s top ten US destinations.

Here’s the best places to eat in Detroit. 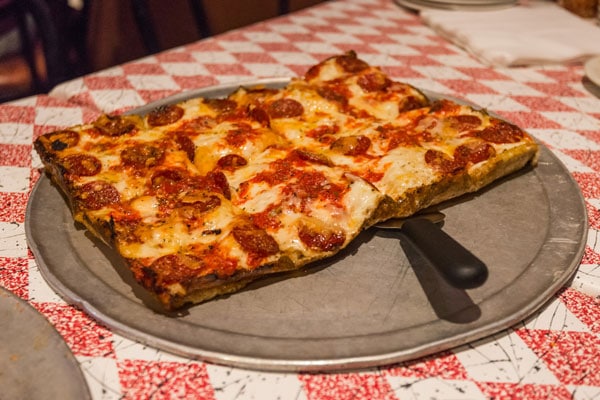 It’s deep-dish in Chicago, wood-fired in Naples, and by-the-slice in New York. But did you know Detroit has its own pizza style? You’ll find square pies, made with a thicker focaccia-style crust, topped with ingredients like pepperoni and brick cheese and finished with red sauce. What makes these pizzas especially unique is the industrial blue steel pan used to bake the pies—similar to pans used by auto workers. There’s a few places to check out this classic Motor City dish.

Open since 1946, Buddy’s claims Detroit-stlye pizza originated in its kitchen. Though they’ve since opened many additional locations, try to make it to the original on Conant Street. In 1953, Gus Guerra, a partner at Buddy’s, struck out on his own and opened Cloverleaf. This shop also claims to have started the Motor City Square pie—I say who cares so long as the pizzas are good. Other notable Detroit-style pizza parlors include Loui’s and Shield’s.

A lot of things about Detroit may have changed over the years, but thankfully, there’s a few culinary stalwarts that haven’t. There’s Ernie’s Market, an old-school deli where the friendly service from Ernie himself is even more legendary than its sandwiches. He greets each customer personally, making sandwiches to order. There’s no set menu—he’s just making lunch with whatever kind of sandwich meats he sliced for the day. Newbies walk away with his signature handful of Hershey’s Kisses. There will likely be a wait, but rest assured you’ll leave with the biggest smile on your face. 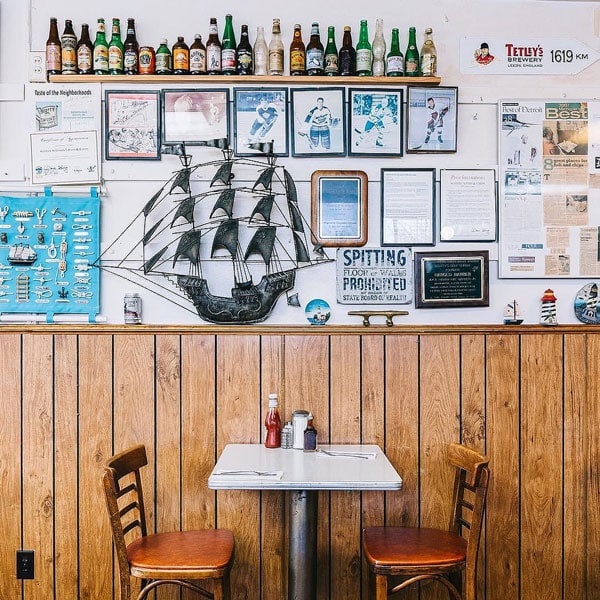 Take a step back in time at Scotty Simpson’s Fish & Chips. Open since 1950, not much has changed in the nearly seven decades since—right down to the worn red carpet, wood paneled walls and of course, the recipes. Order their signature fried cod, served with fries, coleslaw and tartar sauce.

Though it would sound like this delicacy hails from Brooklyn, you’d be wrong: Coney Islands are actually a Detroit thing. Duly’s Place does a fantastic coney. For nearly a hundred years, they’ve served messy hot dog smothered in chili at their counter service, cash-only spot. Another fantastic spot for chili dogs has to be American Coney Island. Open since 1917, they’re the oldest family-run restaurant in town, and the originator of the chili dog. 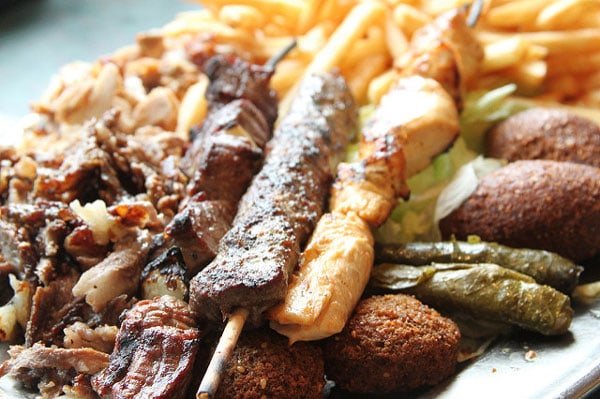 Did you know Dearborn, Michigan is home to the largest Arab-American community in the US? It’s true, and that means there’s plenty of amazing Middle Eastern food to be enjoyed! Locals adore Al-Ameer, a casual Lebanese restaurant serving schwarma, pita, hummus, tabbouhleh, falafel and more. Go with a group so you can sample everything! For those with a sweet tooth, check out Shatila Food Products, a Middle Eastern bakery. Can you say baklawa?

A lot of food media touts Detroit as the next big food city. With the number of cool, new restaurants opening, I see why. Katoi*, a Thai-ish restaurant from Chef Brad Greenhill. Formerly a popular food truck, Katio went bricks-and-mortar in 2016 to rave reviews. Housed in a garage in Corktown, everything about this spot screams party. The original cinderblock walls radiate with colorful lights, and there’s often a DJ spinning records. The food matches. You’ll find the vibrant flavors and cooking techniques of Thailand shot through a more fun, modern prism. Think steamed mussels with cilantro butter, saffron aioli, charred bread and nuoc cham (that’s a Vietnamese dipping sauce); or Thai fried chicken sandwich, topped with pickled jalapeno and cilantro on a brioche bun.

*Katoi is currently closed due to a fire. My heart and mind is with them during this difficult time.

A few other notable options: for a romantic dinner, check out Antietam. This French brasserie-style restaurant, with its rich, reclaimed wood paneled walls, dim lighting and lots of antique décor, has a certain sexy je ne sais quoi.

If beer and pub food is more your thing, check out Batch Brewing Company. Excellent brews ranging from mild (like a kolsch and brown ales) to medium (hello, Punxsutawney Pale Ale!), to downright crazy—the Antwerp’s Placebo 15.4% has as much ABV as its name purports. Yikes! Good thing there’s chef-driven bites available, like pretzels with spicy mustard dip, fish tacos, sandwiches and more. 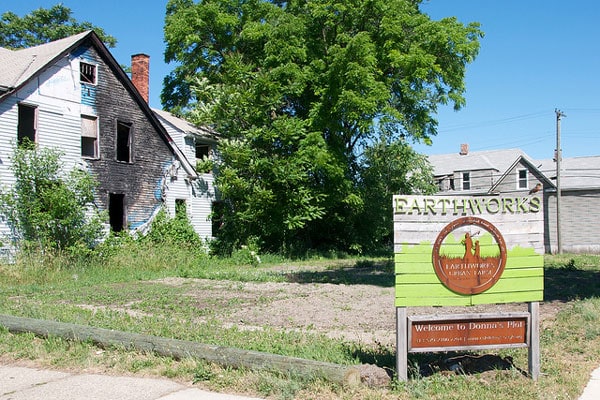 An economic and demographic decline ravaged Detroit, leaving abandoned houses, business and lots of open land. However, entrepreneurs, artists and visionaries are breathing new life into the city. Currently, there are more than 1,400 farms operating in Detroit. Book an Urban Agriculture Bike Tour with Wheelhouse Direct and see how food goes from garden to fork, visiting a variety of different farms and market gardens in the downtown and east side neighborhoods. 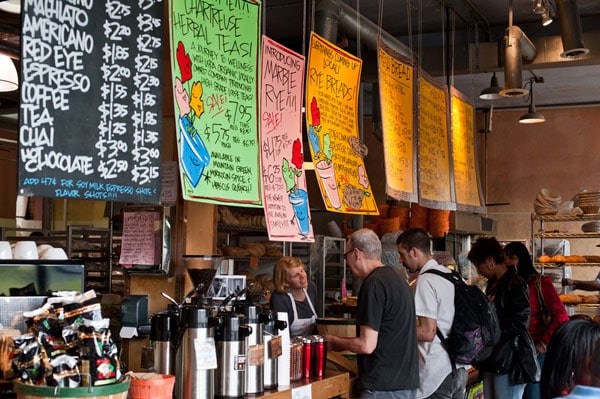 For 20 years, Avalon International Breads has churned out more than fresh baked good. Owners Ann Perrault and Jackie Victor set out to create a small business that could serve as an anchor in the community, not only using local, organic products, but providing employees with fair wages, good benefits and an environment that encourages growth. Go for the brioche sticky buns, and stay for a slice of vibrant local color. 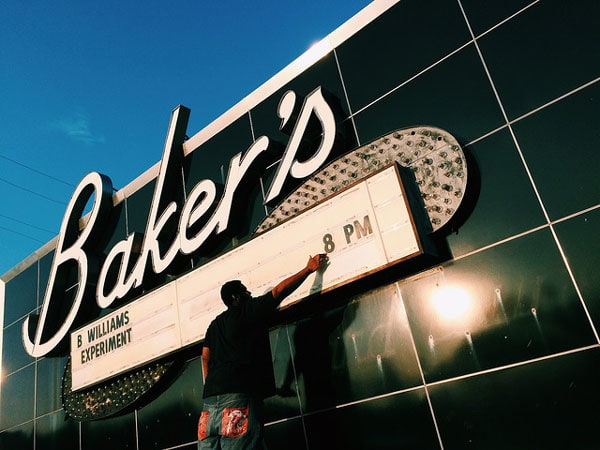 As the birthplace of Motown, Detroit’s musical roots run deep. There’s no shortage of great places to see it live, all while enjoying food and drink. In its 85 years, many notable jazz and blues artists graced the stage at Baker’s Keyboard Lounge, including Miles Davis, Ella Fitzgerald and Cab Calloway. It’s Detroit’s oldest jazz club in continuous operation. Go for old time supper club-style food  and cocktails paired with incredible live music.

For a more speakeasy kind of experience, head to Café d’Mongo. There’s no phone number, and no website, but trust me, everyone knows how to find this Griswold Street gem. Teeming with character (mismatched glasses, hodgepodge furniture) and characters (every walk of life is represented), this is a one of a kind joint you need to see for yourself. hey offer a weekly grilled cheese special that’s perfect for soaking up whatever you’re drinking. For most people, that’s a Detroit Brown, made with Vernon’s Ginger Ale, Crown Royal and bitters.

What are some of your favorite places to eat in Detroit? Share in the comments! 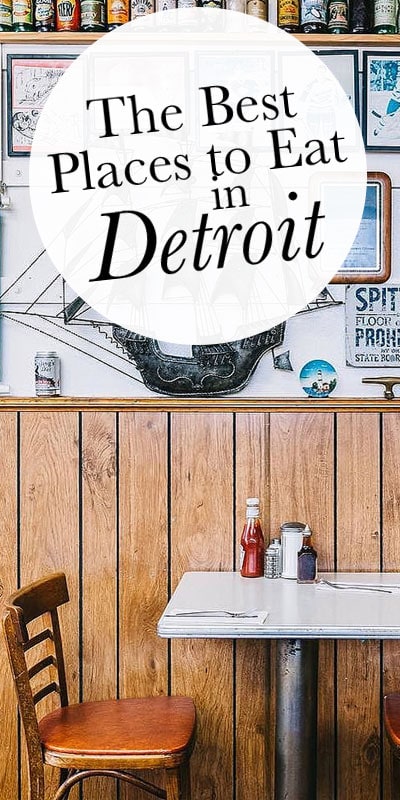 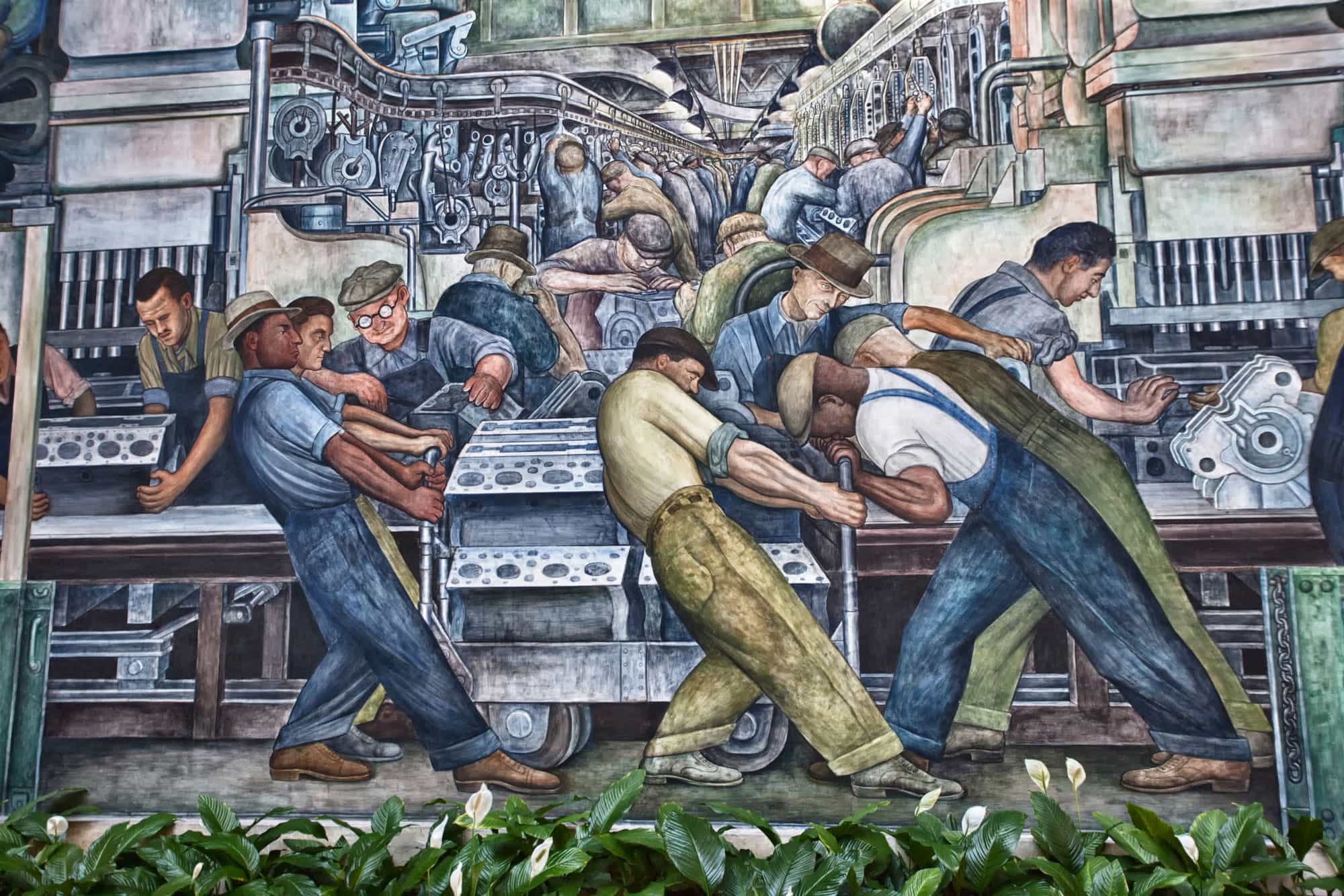