In Quebec City, winter is paradise. Here, snow and ice only increases the opportunities to head outdoors and feel alive. It’s a city with incredible history, where the architecture is regal and the streets enchanting. Centuries-old traditions are met with a jubilance even the biggest parka, scarf and toque (that’s what Canadians call beanies) can’t cover up. But what really made me fall for this city is the people. The Québécois exceptional gusto and generosity is as welcoming as crackling fire, or a mug of hot chocolate. They love winter, and when you’re there, it’s impossible not to have that enthusiasm rub off on you. See why Quebec City, Canada is a place to love.

Ice Canoeing: The most Canadian thing ever?

When I saw that there was a thing in Quebec City called ice canoeing, I thought, “that’s the most Canadian thing I’ve ever heard!” I met up with Caroline Boyaud and Lauriane Oullet, both competitive ice canoers. It’s one thing to canoe across the Saint Lawrence River in summer. It’s something else completely to do it in the winter.

The creation of the sport was born out of necessity. Long ago, people needed to get to the other side of the river year-round. Hence ice canoeing, where you paddle until you hit ice, then scramble over the flows with one leg in the boat and the other on the ice. Trust me when I say this is one winter sport that won’t make you cold.

WANT TO TRY IT?

Competitive ice canoeing is something only done in this part of Canada. If you want to give it a whirl, check out Canot a Glace for an immersive (but hopefully not full body into the river) experience. Best part? You get cookies and hot chocolate at the end!

Welcome to the SUGAR SHACK

La Beauce is a region in the province of Quebec and it’s known for one thing: producing the most maple syrup in the world. I met with Pierre Faucher, owner of La Cabane à Pierre. His family bought this land over 115 years ago, operating a simple farm with some maple syrup production. Today, he’s still making maple syrup the old fashioned way, collecting buckets of maple water and boiling it down to syrup in his shack. He knows his stuff—Pierre doesn’t use much technology, only fire and eyesight to determine when the syrup is ready for bottling.

If you’re going to put all this effort into creating maple syrup, you’re gonna want to share it.  And share it they do at La Cabane’s restaurant, built right next to the source.  Pierre’s son, Stefon, runs this magical restaurant, where family, friends and stranger s sit at communal tables eating stick-to-your-bones meat and potatoes topped with maple syrup, listening to live music and celebrating the approaching spring season. Most sugar shacks are open seasonally, between February and April.

Sugar shacks are typically found in Eastern Canada and northern New England. It’s where the sap that’s collected from sugar maple trees is boiled down to make maple syrup. There’s often some form of a cozy dining featuring maple-doused specialties, plus outdoor activities like sleigh-riding.

The Grande Dame of Quebec City

Soaring over the St. Lawrence River, the Fairmont Château Frontenac is not only an icon of Quebec City, but the country of Canada. Its spires, turrets and gables have served as a regal entrance to this World Heritage city. The Chateau was built on a hill in 1893, and for over 125 years, the Fairmont Chateau Frontenac has been a sight no one forgets – including me! My family visited when I was nine, and it was the most beautiful building I’d ever seen. The romanticism of this hotel, inspired by the 14th- and 15th-century châteaus of the Loire Valley, will have you feeling like you’re living in a fairytale. You’re never too old to love that!

In 1943, the hotel received a call to cancel all reservations. Two weeks later, the hotel hosted a top secret meeting between Roosevelt, Churchill and MacKenzie to plan D Day. Over 600 rooms were vacated so that the three men could meet daily in the hotel’s Rose room to plan the invasion that changed the course of WW2.

Outside the Fairmont Château Frontenac, you’ll find a funicular dating back to 1879. This elevator takes you down to the beautiful district of Petit-Champlain, the site of the first French settlement in North America. The area sprung up in 1608, making it a wonderful area for a historical walking tour.

One of its biggest draws is its main street, Rue de Petit-Champlain. This postcard-perfect street wasn’t always so enchanting. For decades, the buildings fell into disrepair, and the street was nearly bulldozed to make space for a parking lot. In the 1970s, visionaries bought a block of derelict houses and began to recruit artists and artisans interested in working and living there. They kept the traces of the many changes to the houses over the years, recycled as much material as possible, and spruced them up discretely so as to preserve the historical character. Today, it’s the heart of the city—an absolute treasure almost lost entirely.

Visit Sculpteur Flamand. Native of Quebec City, the sculptor Alain Flamand has been in the Quartier Petit Champlain for over 30 years. He’s one of the few artists who helped bring this street back to life. His shop is of the first established in the Quartier, and is filled with his beautiful hand carved, wooden works of art.

You might think winter isn’t the ideal time to visit Quebec City. But this city shines come late January or early February. It’s their Winter Carnival, where Quebecers’ full embrace of winter is on display. People of Quebec don’t hide and hunker down from the cold – they embrace it. Check out snow and ice sculptures, ice canoe races, snow baths (yes, that’s exactly what it sounds like) and giant slide and more. I even had the great opportunity to learn the art of ice carving with the carnival’s Chief sculptor, Michel Lepire. Yes, it’s as hard as it looks.

Look for a certain smiling snowman. This is Bonhomme, the beloved ambassador of Winter Carnival. He’s so cute, you’ll want to hug him. I know I did!

Another reason to visit Quebec City in winter? Hotel le Glace, the only ice hotel in all of North America. With its majestic snow arches, crystal clear ice sculptures and beautiful rooms, the Hôtel de Glace offers its guests a one-of-a-kind winter experience. The hotel transforms itself year after year to charm its visitors… and the fact that the whole thing is made entirely of ice and snow simply boggles the mind. Go for a tour or a cocktail, and if you can’t get enough, stay the night in one of their rooms. Some even come with fireplaces, private hot tub and sauna! 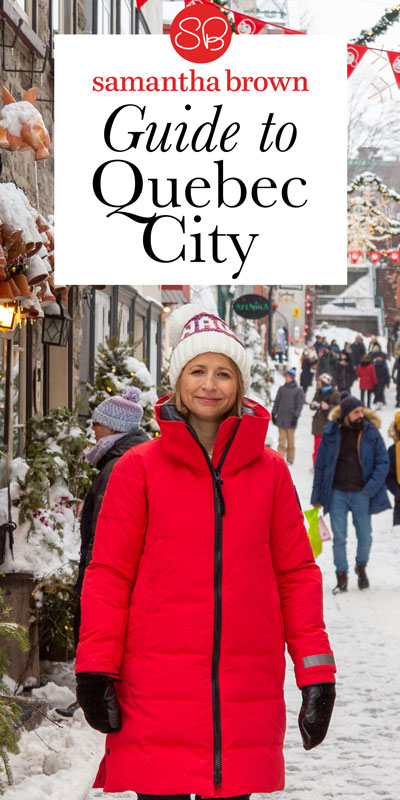 The chapel at the Ice Hotel hosts up to thirty weddings a year. They even provide two handmade ice flutes for a champagne toast.