It’s a city that simply stuns in its beauty. A rich, physical expression of history and tradition, yet at its heart, a destination of comfort, friendliness, and ease. It’s a city where wine is not only enjoyed but grown within its urban limits. Where serious music is seriously playful, and what remains hidden is remarkable! It’s the capital of not just a country but an entire empire. See why Vienna, Austria is a place to love.

Want more behind the scenes info on this episode? Watch my Facebook Live episode here!

Want to mingle with the locals? Head to the Naschmarkt early, while tourists are still at the hotel, enjoying their continental breakfast. This is the oldest market in Vienna (founded in the 16th Century!), stretching over three blocks and compromised of cafes, food stalls, multicultural ingredients and more. I walked the market with food lover, writer and chef Bianca Gusenbauer-Hoppe, we tried incredible goat cheese, as well as a traditional Viennese boiled ham, sliced thinly and served on a Kaiser roll with horseradish.

Looking to explore the market with a knowledgeable local? Connect with Bianca, who can act as a tour guide, teach a cooking class, and more.

Step into the largest baroque library in Europe, and you won’t need to be reminded to shhh. It will render you speechless. Built in the first part of the 18th century by Emperor Charles VI, this dramatic space houses over 200,000 books, adorned with a frescoed dome. This is one of the many lasting legacies of the Hapsburgs, who shared their private library with the public (though at the time, only 10-15 percent of the population could read). My guide Hanna von Schiller, showed me around this impressive place, noting a few of its idiosyncrasies. For example, the books are not in chronological order, but by size. You’ll find the larger books on the lower shelves, while smaller ones sit at the very top. Easier to transport them, for sure!

The library has 12 hidden chambers. These are accesses through bookshelves, much like a secret passageway. This wasn’t intended to hide books, but rather provide warmth and light, especially in the winter.

Though the Austrian Empire is no more, so much remains from their rule. One such place? Jean-Paul Vaugoin Silver. Founded in 1847, this company serves as a living tie to the Empire (with the official seal from the Emperor to prove it!). Vaugoin is one of the last silversmiths in the world to produce cutlery, tableware, decors, vases, handbags, picture frames and jewelry traditionally by hand. Now run by its sixth generation, this shop keeps long-lost traditions alive. One example? Their full silver sets that include 25-plus pieces per person, including a sandwich fork. You can shop as well as sneak a peek at their workshop, housed in the back.

Yes, they are still making full silver sets, and some of their clientele is made up of Malaysian sultans. Sultans… they’re just like us!

Founded in 1814, A.E Köchert is the biggest name Austrian jewelry… and is still family owned! In 1831, Emperor Franz I commissioned the aspiring company with the production of a gold box for the Turkish ambassador. One year later, Köchert earned the regal title of “Imperial and Royal Court Jeweler.” One of their most famous pieces were the stars of Empress Elisabeth. Sisi possessed 27 of these diamond stars, which she could wear as a necklace, a diadem, or as pendants, brooches and hair accessories. Unfortunately, as the family lost their empire, all of the stars (as well as other notable pieces) were sold. When possible, A.E. Köchert buys back these pieces, and safely stores pieces for royal families. They even loan out pieces to royal descendants for special occasions.

Want a piece of the Austrian Empire? Kochert reproduced the stars of Empress Elisabeth, all according to the original design. You can wear these stars as brooches, pendants or hairpins. There’s also earrings and necklaces inspired by the originals.

Talk about a museum with a very specific purpose: This place dedicated solely to the 1949 film, the Third Man. I explored the museum with its founder Gerhard Strassgschwandtner, who started the museum with a small space, then continued adding on, acquiring more buildings as the collection grew. The museum showcases movie posters, memorabilia and even a projector from 1936 used for the screenings of the film in Vienna in 1950, which displays what one minute of film looks like. What made this film special is that British producer Alexander Korda wanted to create a movie about post-war Europe. He chose Vienna, which was divided into four occupied zones by the U.S.A., Great Britain, France and the U.S.S.R. All four powers worked together in the Inner City. It was filmed throughout the city, post-war rubble and all.

The film features a 10 minute chase scene, set in the Vienna sewer system. You’re able to take a walking tour through the sewer (it’s not too gross, I promise!), as well as a fresh water river flowing a half-mile underground. Learn more here.

The Sound of Music

When you think of music in Vienna, you probably imagine very serious stuff of the classical variety. At the Haus der Musik, you’re encouraged to not just listen, but play.  Since its opening in 2000, Haus der Musik has welcomed over 3 million visitors, inviting them to experience music in a new way. For example, you can roll the dice to create your own waltz. The Beethoven room gives you an idea of what he heard while he was going deaf. Hear what music sounded like while in your mother’s womb. You can even see what it’s like to conduct the Vienna Philharmonic Orchestra, complete with a stern talking to from a senior violinist if you mess up

Check out Stairplay, an interactive experience that helps you learn about music in a playful, simple way. The piano keys are arranged in the form of a musical staircase, on which you can play notes, create music and discover new sounds, over and over again.

I love green space in a city, and in Vienna, it’s not just green but blue. I joined American ex-pat Adia Trischler on a leisurely boat ride on the Old Danube. She explained that there’s an ever-present sense of vacation in Vienna, and locals prioritize their leisure time with gusto. See that philosophy in action on the Old Danube, a calm arm of the river, which serves as a play area for boaters, swimmers, sun bathers and more. Don’t feel like getting on the water? Check out one of the roughly forty restaurants along its edge.

Rent a boat, paddle board or kayak and enjoy the city from the water. Details here.

Can’t decide if you’re a city mouse or a country mouse? In Vienna, you don’t have to pick. There are numerous hiking trails that start in the city and meander up the mountains. Along the way, you may happen upon a gorgeous vineyard, complete with a heuriger. These casual, outdoor seating areas are to Vienna what biergartens are to Munich—except here, you drink wine. Adia and I visited Wieninger Winery, owned by fourth generation winemaker, Fritz Wieninger. We enjoyed a bottle of Germichster Satz, the wine of Vienna. At least three different types of grapes grown in the same Viennese vineyard are combined together to create a wine representative of a specific time and place in Vienna. Prost!

Look for a fur tree branch hanging outside of the heurigers. 250 years ago, the emperor allowed wine producers to serve directly to the consumer. Hanging a branch outside a winemaker’s home meant you were open for business.

Vienna is known for its serious cafe culture where cakes have a royal pedigree and the cafe’s look like palaces themselves. Vollpension, also known as the Granny Cafe, is a new type of cafe. Opened my millennials who recognized that their generation could be lonely and struggling in a new city, they decided to reach out to another potentially lonely community: the retired generation. Why not bring two great generations together? The cafe looks straight out of your Grandmother’s house: comfy couches, mix matched wooden furniture and framed family pictures on the wall. Retired Grandmothers bake delicious cakes, based on their own recipes. It’s one of a kind, and I truly wish it weren’t– what an incredible concept!

Addicted to your phone? Go here– they encourage patrons to put down their phones and talk to one another.  What a concept!

A feast fit for an Emperor

Austrian Emperor Franz Joseph made boiled beef hugely popular when he declared that it was his favorite dish. A meal at Plachutta will leave you feeling like a member of the royal family. A traditional Tafelspitz dinner was the one of the most popular meals in Vienna, reserved for the ruling class. Tafelspitz is enjoyed in separate courses: first comes a broth that’s served hot in bouillon cups, followed by tender slices of beef which are accompanied by potatoes, carrots, and a creamy apple-horseradish and chive sauce. While this meal used to be reserved for royalty, it’s now enjoyed by the masses at one of Plachutta’s six Vienna locations. 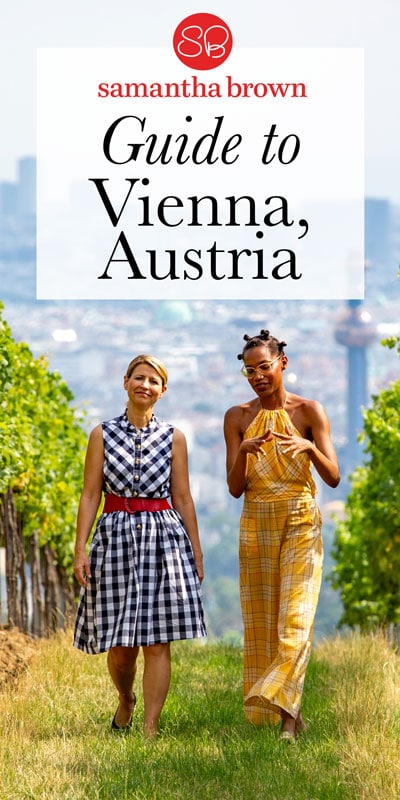 These guys take sourcing seriously. They know all the farmers producing beef, what the cattle are eating, and that every cow was born and raised in Austria.