I’m in a city where the year-round weather is just about perfect. It’s a place known its great outdoors—from its desert environment, to its art, and even settings for a five-star meal. Its surrounding landscape and climate is so restorative that one of the world’s most famous architects wintered here, designing his own home to bring the outdoors in. But even indoors, this city’s offerings shine brilliantly. From a one of kind museum dedicated to musical instruments, to a 50-year-old theater company, and a food and drink scene that comes from the heart, the nation’s fifth largest city offers many personal, inspiring experiences. See why Phoenix, Arizona is a place to love.

Check out more behind the scenes info from my Facebook Live chat here!

I’ve always found the use of the word “desert” as a place being void of something a little strange. There is so much happening in the desert, and the Desert Botanical Garden proves it. My dear friend and fellow traveler, Jack Maxwell, brought me through this incredible park. You may know him as the host of the series Booze Traveler, but he’s just as passionate about Phoenix’s natural beauty as he is about their margaritas. We strolled through the garden, featuring 50,000 desert plants, from the Sonoran to around the world.  With five thematic trails, you can get lost in thought or conversation without worrying about getting lost (or accidentally stepping on a snake).

The cactus is the 5th most endangered organism in the world? Cacti are more endangered than pandas, and the main reason is poaching. This means that a seemingly harmless passion like growing cacti at home could significantly contribute to the decline of some species.

A taste of the Caribbean in the heart of the desert

If you’re touring Phoenix with Jack Maxwell, grabbing a cocktail is definitely on your itinerary. Jack brought me to his favorite bar in town. And guess what? They aren’t known for their margaritas. The Breadfruit and Rum bar is owned by husband and wife team Dwayne Allen and Danielle Leoni. Dwayne, a native Jamaican, oversees the cocktail program, which features one spirit and one spirit only: rum. Danielle, an American, cooks Jamaican food (her primary goal? To impress Dwayne’s grandmother!). They were one of the first restaurants in the historic Evans Churchill neighborhood just north of Phoenix’s downtown.

Want to drink sustainably? Order the rum punch, whose recipe changes daily based on what’s available seasonally (as well as what scraps they need to use up in the kitchen).

I think we all can agree that Frank Lloyd Wright is a national treasure. Experience one of his most personal masterpieces in Phoenix—the breathtaking Taliesin West. Fred Prozzillo showed me around this beautiful estate. This was Wright’s personal winter abode, where he not only lived, but taught students during the winter. Built in 1937, Taliesin served as the setting for many an epic formal party, where guests were encouraged to wear gowns and tuxes and bring their own sleeping bag.

On tours you’re able to sit in an original Origami Chair – created from a single piece of plywood.

Music from around the world

From acoustic guitars and intricate harps, to drums make of found cans, I had no idea how many musical instruments exist! The Musical Instrument Museum is home to over 15,000 instruments, with every country in the world represented. There is a lot to be seen (and heard), but some highlights include and instrument repair shop, where you can watch technicians fix instruments. There’s a hands-on section where you can play a lot of instruments like harps and drums and marimbas from all over the world. Most fun is a Theramin! The museum’s message is most powerful when the instruments are the most rudimentary.  A cello made from a discarded utensil and oil cans, a trumpet made of bamboo,  and the lower jaw bone of a horse with a nail all make a powerful statement of how vital music is in our lives, and that that people will stop at nothing to make it.

There’s often a group of musicians playing in the lobby, meaning you can see some of these lesser-known instruments being played.

Art is great, but there’s truly something magical about seeing how pieces are created. That’s one of the reasons why a trip to Cosanti Galleries is a must. Look on as foundry artisans pour molten bronze into their iconic windbell molds. This spectacular foundry creates 500 bells weekly! In addition to bronze and ceramic bells, they also make pots, planters, and bowls and more. Craving a deeper look? Take a tour with an experienced docent and go behind the scenes to learn about the unique earthcasting technique that created these captivating and unique structures.

Tours are held twice daily, at 9:45AM and 11:00AM, Monday-Friday, year-round. Tours are $15 per person and include watching the daily foundry ritual of molten bronze being poured into the windbell molds.

Understanding through the arts

When it comes to fostering understanding between people of different backgrounds, nothing quite compares to the arts. That’s why Helen Mason founded the Black Theatre Troupe in 1970. A parks and recreation manager for the city, she saw the need for poetry, song and dance as a way to be expressive against the racial injustice that was tearing other communities apart. 49 years later, this theater company still exists. On my visit, Executive Director David Hemphill, a former New York City banker who retired to help run the theater 25 years ago, brought me backstage to meet the actors, singers, dancers and musicians who make this place so special.

The Black Theatre Troupe showcases five or six 5-6 productions a season, running from September through April.

A farm in the middle of the desert?

When you think of the Phoenix landscape, farm land probably doesn’t come to mind. However, just outside of the city you’ll find a true oasis in the desert. Born from an ancient riverbed that blessed the grounds with naturally-rich soil, The Farm’s vision of sustainability was originally conceived by Dwight Heard (benefactor of the Heard Museum) in the early 1920’s. The Farm’s current owner, Pat Christofolo, purchased the farm in 2012, creating a food-centric destination that’s one of a kind. With acres of greenery, tall trees and organic gardens, the farm sustains three restaurants and two event venues that host 200 events and 100,000 visitors a year.

You’ll find more than food at the farm. Visit Botanica, a modern market offering fine products for the garden, patio and kitchen.

Tucked away in an almost hidden corner of the Farm, you’ll find one of the nation’s most celebrated restaurants. Chef Dustin Christofolo launched the farm-to-table restaurant Quiessence before farm-to- table before that was even a thing. Housed in the property’s original farmhouse, Chef Dustin determines each element planted in the garden to perfect his refined, rustic menus that change with each harvest. The flavors of the Arizona terroir shine through each dish with the unique layering of flavors and exceptional uses of the local ingredients. With the delicious vegetables, herbs and edible flowers from our on-site garden, over 60 fruit trees, eggs from our chicken coop, fresh breads from our Le Panyol oven, and meats and cheeses from other local farmers and purveyors, guests experience the freshest ingredients possible when dining at Quiessence.

Quiessence is certainly a special occasion kind of place, where reservations are a must and rambunctious kids are a no-no. Don’t worry—you can still enjoy the bounty of the farm with a meal at the Morning Glory Café; or a fantastic picnic lunch from the Farm Kitchen.

Martha Castillo’s tamale obsession is now a thriving family business. The mother of four started making tamales that brought her back to childhood in Mexico City, eventually perfecting the recipe and selling it at farmer’s markets. In 2008, she opened the Tamale Store. Though her children had considered other careers (law school; a doula; boxing), the draw to Mom’s kitchen was too strong. Today, the Tamale Store continues to build their empire, one stack of masa at a time.

Though the restaurant was filmed during my Phoenix shoot, the segment won’t air until later this season in my International Foods Special. 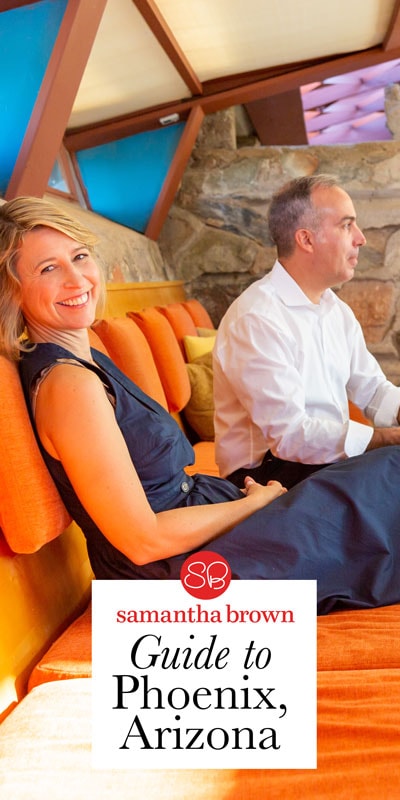 The chicken mole is a favorite, but there’s plenty of other delicious options, including many vegetarian and vegan tamales!