Everyone has heard of Budapest, but few can grasp its magnificence. It’s a captivating city with a confluence of history, art and music. As one of Europe’s largest cities, it boasts an exuberant energy that must be felt to be believed. It’s a powerhouse of grand experiences that range from the worldly to the local, from the deeply emotional to the joyous. Budapest is a place to love.

Want more behind the scenes info on the Budapest episode? Watch my Facebook Live chat here!

Are you Team Buda or Team Pest?

If you don’t go to Fisherman’s Bastion and take a selfie, how will anyone know you’ve even been to Budapest? From the Bastion you’ll get the best view of the sprawling city and the Danube. Buda and Pest were once two cities, separated by the river. Buda is the historic section, Pest is more modern. So while Buda offers so much of the historical context, you’ll want to spend a lot of time in Pest. That’s where you’ll find the buzz of the city.

Be sure to ride the city’s funicular railway, which has been in service since 1870.

I loved exploring the city with Balazs Gyemant! If you’re looking for an excellent local guide, contact him at balazs.gyemant@gmail.com.

Budapest is home to the most beautiful café in the world. The New York Café, built in eclectic Italian Renaissance-style, opened on October 23, 1894. For over 125 years, it’s served coffee and hearty food to writers, dignitaries, and everyone in between. Sparkling chandeliers dangling from high ceilings adorned by spectacular frescoes, it’s easy to see why writers came here to sip coffee and feel inspired.

Make the time to sit and enjoy your coffee. In fact, it’s rare for Hungarians to take their coffee to go. Savor every sip, soak up your surroundings, linger as long as you possibly can.

Just what the doctor ordered

Budapest has several nicknames, including the City of Spas. The numerous natural warm spring waters under the city have made thermal baths a part of local culture for centuries. The Szechenyi Thermal Baths is where the locals come to find their bliss. These indoor and outdoor thermal baths are filled with mineral-rich waters brought up from 4,000 feet below the earth. It rises to the surface at 180 degrees, then is cooled to desired temperatures. Inside the opulent baths (you’ll see why people refer to this place as “the palace”), you’ll move from room to room, encountering different pools – 21 in all – with varying water temperatures. It’s very easy to spend the entire day here.

They do rent towels, but it’s much less of a hassle if you bring your own. A pair of flip-flops is also ideal. The outdoor baths are open year-round, so a robe might be nice for venturing outside.

In a city full of show-stopping architecture, one building reigns supreme: the gothic revival style The Hungarian Parliament Building. It’s the third-largest Parliament building in the world, with 691 rooms, 20 kilometers (12.5 miles) of stairs, and stands 96 meters (315 feet) tall.

I joined guide Andras Lukacs on a tour of the building, venturing through the ornate room after room. Today, the Hungarian representatives still meet here to vote. Interestingly, you can also see the country’s coronation regalia for kings – the crown, the orb, the scepter – here. This crown has sat atop the heads of 50 kings. Today, it’s said to still embody that regal power, which now belongs to the people of Hungary. Hence why the parliament is the perfect place to display it.

Want to take a tour? Buy your ticket in advance and forgo the long, slow line. It’s worth noting English tours do sell out quickly!

One of the surprises of Budapest is that while it’s an opulent European capital, the cost of living is actually quite affordable. You can enjoy a Michelin-starred meal here for a fraction of the price you’d pay in New York or Paris. Case in point: lunch at The Stand. This fine dining restaurant puts a modern spin on traditional Hungarian dishes, like langos (fried dough topped with garlic, cheese and sour cream), goulash, and tokaj aszu, a locally made dessert wine.

Eat like royalty for a fraction of the price. An exquisite multi-course lunch, without wine, costs only about forty US dollars.

The Franz Liszt Music Academy Music is notable for its architectural merits, as well as its role as one of Europe’s important music schools. Named after its Hungarian founder and first director, piano virtuoso, composer, conductor, teacher Franz Liszt, this prestigious conservatory was established in 1875.  It’s still a working college of music, with over 800 students from around the world.

This is not only a world-renowned teaching institution, but also the city’s primary concert hall. The Great Hall is an extravagant space, and home to a rare instrument – a masterpiece of an organ, with four thousand pipes, four manuals, and 77 registers.  More common in basilicas, the organ is here for musical study and professional concerts.

This amazing Art Nouveau building is a lovely place to go and see great concerts, listen jazz, classical or modern music. They also offer free concerts on a regular basis, what is more, the guided tours end with a mini-concert from one of the students. More info here.

The best view in town?

Music plays a huge part in a trip to Budapest. So much so that there’s even a hotel dedicated to all forms of it. The Aria Hotel offers the crescendo that makes the end of a day a finale. The onsite music concierge knows all about the local music scene, and will help you find the perfect place to soak up the local sounds. Add in complimentary breakfasts, plus afternoon wine & cheese, and I say this hotel is darn near perfect.

I love a panoramic view, and the rooftop bar at the Aria Hotel offers one of the best in town, and overlooks the basilica.

The Dohány Street Synagogue is the largest synagogue in Europe, with seating capacity for 3,000 people. Built between 1854 and 1859 in the Moorish Revival style, the complex includes not only the synagogue, the Heroes’ Temple (dedicated to the Jewish soldiers of WWI), graveyard, a Memorial and the Jewish Museum. Dohány Street served as the border of the Budapest Ghetto, and to this day, it remains an important places of remembrance for those who perished during WWII.

Your ticket into the complex includes a free 45 minute-long tour, which can (and should, unless you like waiting in lines) be purchased prior to your trip. Details here.

Visit the Raul Wallenberg Memorial Garden on the synagogue’s north side. One of the most moving sites is the Holocaust Tree of Life Memorial, which stands over the mass graves of those murdered by the Nazis in 1944–45. The metal leaves of the tree are inscribed with family names of victims.

These days, food and travel really go hand in hand. Did you even experience Budapest if you didn’t dive into a bowl of goulash? I feel the same way about music. The sound of a place is just as important as the taste. In Hungary, the sound is authentic Gypsy music. My trip coincided with the gala Festival Academy Budapest, and I joined musicians Joshua Bell and Barnabas Kelemen, to hear Gypsy music at Café Vian. The café doesn’t always offer live music, but if you’re looking to experience some while in Budapest, check out BudapestConcert.com. 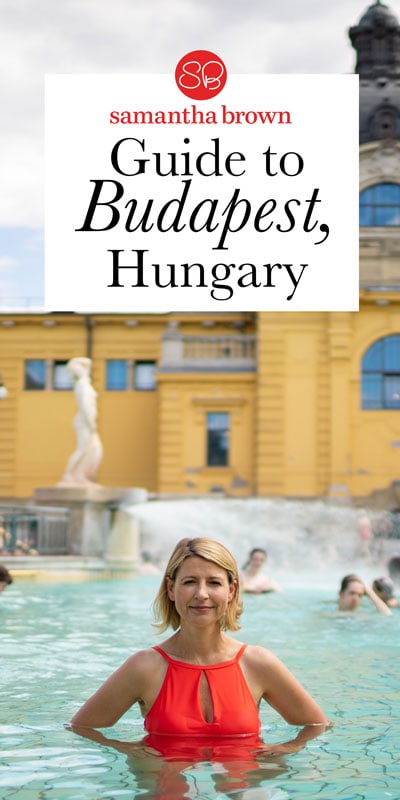