Places to Love: The Rhine River

For over 20 years, I’ve traveled the world professionally. As any traveler knows, the more places you see, the more you want to see. Though I’ve checked many adventures off my bucket list, one alluded me until last summer: a European riverboat cruise. I enjoyed exploring the Rhine River with AmaWaterways, touching four countries and about 1,000 years of history. Castles, cathedrals, ‘bourgs and ‘bergs, this was an adventure of a lifetime. You can easily see why the Rhine River is a place to love.

Yep, it’s true: Freiburg is Germany’s sunniest city. But there are many more reasons than the vitamin D that make this place special. Born and bred Freiburger Peter Kalchthaler, the director of Freiburg’s Museum of Urban History, walked me through some of this city’s greatest hits, including its cathedral and market that dates back to the 11th Century!

Freiburg is located just outside of the Black Forest. And from a culinary standpoint, when it comes to that region, its namesake cake comes to mind. Well, forget it… it’s the kaesekuchen that’s truly special. Peter introduced me to Stefan of Stefans Kasekuchen fame. Sixteen years ago, Stefan started making cheesecake for Black Forest hikers and bikers looking for quick and easy energy. They fell in love with his product, so much so that Stefan took his treats from the forest to the city’s market. Today, he has over 40 stalls all over the country.

You can sample the stuff yourself at Freiburg’s market, open every day except Sundays.

In addition to his plain cheesecake, Stefan also creates seasonal offerings like rhubarb, apple cinnamon, blueberry and more. He says the secret to his cheesecake is that he doesn’t skimp on fat or calories. It’s a good thing that calories don’t count in Europe! Or at least that’s what I tell myself.

Another day, another Cathedral

Next stop along the Rhine? Strasbourg, France. This is the seventh largest city in France and began as a Roman camp in the 1st Century. Much of this city looks as through time stopped in the 16th Century, making it every traveler’s dream of a storybook European city.

You’ll find another… wait for it… cathedral at the heart of Strasbourg. Construction on this cathedral began in the 13th century. And when you visit, the first thing you’ll notice is all that scaffolding. Really, does the construction ever end on a historic building like this? Not really. I had the pleasure of visiting the stone mason’s workshop, where skilled masons recreate and repair the church’s stone pieces. This workshop has existed since the 1300, and still relies on the same techniques used in the middle ages. It would seem that type of work would take quite a long time, which is why it’s no surprise that when they’ve finished restoring the cathedral, it’s time to start all over again.

Strasbourg Cathedral’s spire made it the tallest building in the world for over two hundred years, starting in 1647. It only has one spire, even though there was space for two.

Rivers work as a natural border between France and Germany, so bouncing between the two is just one of the many perks of cruising. I fell in love with Heidelberg, a little jewel of a city nestled along the Neckar River’s thickly wooded mountains. This city doesn’t have a cathedral, but it does have another European superstar… a castle!

My local guide Klaus Mombrei showed me around Heidelberg Castle, known as more of a ruin. From the outside, this place doesn’t have a huge wow factor– in fact, it was slated for demolition in the 19th Century. Luckily for us, some romantics saved it. Once you cross through the main gates, you’ll stop dead in your tracks. This castle is humongous, beautiful, and now one of the biggest tourist destinations in Germany.

Inside the castle’s walls, you’ll find the largest wine barrel in Germany. This impressive barrel holds up to 50,000 gallons of wine (red or white– doesn’t really matter). Atop it, there’s a dance floor. You can’t make this stuff up.

A Jail for Scholars

Heidelberg is a University town. Founded in 1386, this is the country’s (and one of the world’s) oldest surviving universities. My tour guide Klaus didn’t take me to its great lecture halls or some fancy quad. He brought me to a building whose inside was covered in graffiti. There are rooms with bars, beds, and not much else. As it turns out, this was a student jail!

You’d think imprisonment was a bad thing, but in the olden days, spending a few night in the clink was a badge of honor– students added their names and a silhouettes to the walls as proof they’d spent at last one night there.

Talk about cushy: students would still be able to attend their lectures, but they’d have to return here at night. Sometimes they would invite their friends over and charge them money to hang out and party.

Hot off the press in Mainz

There are many popular destinations along the Rhine, but Mainz, Germany has managed to stay a bit under the radar. It’s a beautiful city with lovely churches, laidback cafes and gelato shops, and the best part? You don’t have to battle the crowds.

Mainz has a claim to fame like no other destination in the world, as the birthplace of Johannes Gutenberg, inventor of the printing press. The Gutenberg Museum celebrates printing of all sorts, along with their most famous local who created a machine that changed the world.

The museum has two original Gutenberg bibles from the 15th Century, so precious and priceless no cameras are allowed to film them.

Rhine rhymes with wine. Coincidence? I think not.

What’s a trip to Europe without some seriously delicious wine? That’s why I headed to Rudesheim. This valley is famous for one particular grape: riesling. It’s a wine I love, but I also find it a bit confusing. How do you know if it’s going to be sweet, dry, or just right? That’s why I was thrilled to spend the day with Adolf Störzel of Störzel Winery.

People have been growing wine grapes here since the 900s. Adolf’s family has been growing grapes here for 400 years, and 80 percent of what he grows are riesling grapes. We sampled a few rieslings, a local rose and even a pinot noir, which is called blauer spätburgunder. To be honest, at the end of our day together, I still didn’t know how to tell if a riesling would be sweet or dry. But I did walk away with a lot more knowledge about this region, and had a heck of a fun afternoon day drinking!

Looking for a one-of-a-kind experience? Book a spot on the wine ramble. This tour starts with a cable car that brings you the top of a hill, then ramble your way back to town, stopping at five wine stations along the way. Book here.

When the journey is the destination

There’s nothing quite like floating through the Rhine River Gorge, a 65 kilometer stretch boasting some 40 castles, fortresses and ruins, each one with its own story. When you enter the gorge, you begin to inhabit the world of myths and legends. This is where you really get a sense of the world history that came out of this small stretch.

Part of the fun of river cruising is the journey. River cruising is to Europe what road tripping is to the United States. It’s the epic, romantic trip that’s as much about the journey as it is the destination. There are lots of ways to explore Europe—by train, plane and teeny, tiny automobile. When you go by river boat, no moment is wasted. Getting from A to B is a feast for the eyes, without fighting traffic or sharing a sleeper car with a snoring stranger. Instead of a car bingo board featuring semi trucks and gas stations, the river cruise version could boast 11th Century cathedrals, fairytale castles, sprawling vineyards and more. BINGO! Now doesn’t that sound more fun?

Cruising is a fantastic way to see Europe. I took this Rhine River cruise with AmaWaterways, who I should mention are a sponsor of Places to Love. They do an incredible job with their trips!

A lot of wine is grown along the Rhine and I enjoyed drinking it tremendously. However, the great city of Cologne (and my guide, Gol Ebrahimpour-Mirzaie), encouraged me to switch it up.

Born and bred in Cologne, Gol schooled me in the city’s basics. She said Germans get a bad wrap for being serious, stern people– but that’s not really true, especially not in this city. People here are laidback and fun, something that’s personified in its favorite drink: kölsch. By German law, this light and fruity pale ale can only be brewed in Cologne, and must be served in tall glasses called stange.

Because kölsch is basically enjoyed like water in Cologne, it’s important to eat while you drink. Gol encouraged me to try their beef tartare, served on a bun and topped with chopped onions. Sounds weird, but it was delicious.

Kölsch is served by waiters called köbes, who walk around a bar or restaurant with trays of kölsch. If they see you’ve run out, they plop down a new one. If you’re done drinking, place your coaster atop your glass to stop the otherwise never-ending beer delivery.

Yep, another cathedral. And it’s a doozy of a gothic church! The Cologne Cathedral dates back to 1248, and is the world’s tallest twin-spired church at 515 feet tall. Kind of an amazing feat when you truly look at all the details!

The construction of this Gothic masterpiece was not completed until 1880. Over seven centuries, successive builders continued to work with the original plans. All those people keeping with the same vision may be the most incredible aspect of this building’s history. 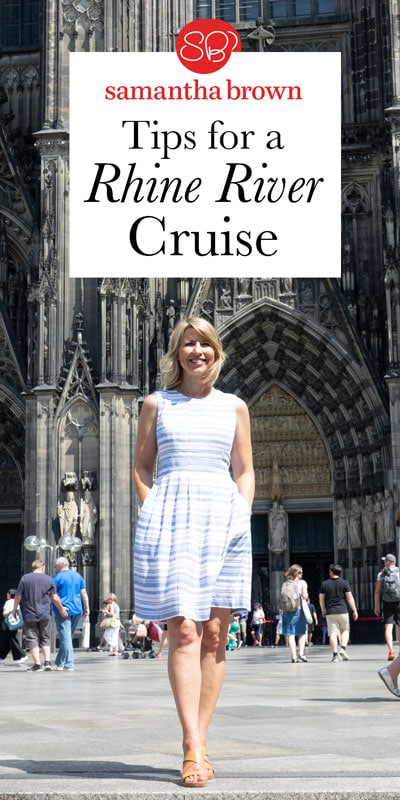 This cathedral is Germany’s most visited landmark, attracting an average of 20,000 people a day.