It’s been a decade since I last visited Xi’an, China, and it felt so good to be back. Founded in the 11th Century BC, every ancient building, bridge and tradition boggles the mind. I started out with leisurely bike ride atop the ancient City Wall, stopped at a traditional Chinese medicine clinic (practicing for over 500 years) to cure my jet-lag, and paid a visit to the UNESCO World Heritage site of the Terra-cotta Warriors. Add in a spectacular outdoor performance of The Song of the Everlasting Sorrow and incredible street food, and you’ll see why Xi’an is a place to love.

Find your bearings along the City Wall

My favorite way to combat jet-lag? Light exercise and open surroundings. In Xi’an, I suggest you get on a bike to explore their City Wall. Walls have played an important role in Xi’an’s military protection since 190 BC. Built during the Ming Dynasty (1368-1644), Xi’an’s City Wall is the most complete version in the country.

Towering 40 feet above the city and stretching over 8.5 miles, the wall offers a great vantage point to see the city and get your bearings. Today, you’ll find tourists and locals out on a leisurely walk or bike ride, enjoying a snack or ice cream cone along the way. The wall has 18 gates, but only a handful are open to the public. The South Gate (Yongning Gate) is the most time-honored and magnificent—that’s where I’d begin!

Bike rentals are most readily available at the South Gate, and cost less than $10 for 2 hours (not including your deposit).

Beneath a field about an hour away from the city center, you’ll find what some consider the eighth wonder of the world. Discovered by accident in 1974 by local farmers, this UNESCO world heritage site now hosts millions of visitors each year. The draw? A life-size, terra-cotta army 8,000 strong.

More than 2,200 years ago, emperor Qin Shi Huang decided he needed to be as powerful in death as he was in life. It’s estimated 700,000 craftsmen worked over two decades creating the army (complete with horses, and even merchants and musicians) meant to journey with him to the afterlife. It’s hard to believe, but each statue is completely unique. The mausoleum stretches over 14,000 acres, and is slightly larger than the Vatican City. Since hardly any of the warriors remain intact, the restoration effort has barely scratched the surface (no pun intended). It’s simply astonishing to think of what’s still encased in the ground below.

There are many ways to get to the museum. Public transportation is available, and a taxi will set you back about $20 each way. You can always talk to your hotel about hiring a driver for the day, which costs between $60-70 roundtrip.

A different kind of doctor’s visit

Crickets, seahorses, beetles—nope, not a zoo. I’m visiting a Traditional Chinese Medicine clinic to cure my jet-lag. In some ways, the experience it what you’d expect: a TCM doctor goes over your symptoms and does an exam. But instead of a checking, say, your temperature, they look for clues in your pulse and the color of your tongue to fix what’s ailing you.

Based on my symptoms, the doctor at Guang Yu Yuan boiled down a mixture of ingredients into one cute little gelatin ball. The taste? Not so cute. Jury is still out on whether or not it helped my jet-lag, but the experience was definitely worth it!

You’d think a city with such deep, rich history might feel a bit serious. At night, Xi’an is anything but! As the sun sets, historic buildings are illuminated with gorgeous lights, setting a fun, festive tone throughout the city.

On my trip, I had the great pleasure of experiencing a live outdoor performance at the Huaqing Palace. Based on a 1,200-year-old poem, Song of Everlasting Sorrow, this spectacular performance melds storytelling with music, dance, incredible costumes and lights. There isn’t much dialogue, so don’t worry if you don’t speak the language—you don’t need to.

Huaqing Palace is more than a theater venue. Explore the former residence of Chiang Kai-shek, or climb the nearby Mount Li. If you’re tired from all that sightseeing, might I suggest a soak in the famous Huaqing hot springs? Built for the imperial family, the site offers 16 beautiful coed hot spring pools. Bathing suits and caps are required.

Tranquility in the heart of the bustling Muslim Quarter

When you think places of worship in China, a mosque probably doesn’t come to mind. However, Xi’an is home to the largest mosque in all of China. During the Western Han Dynasty, the city served as a starting point of the ancient Silk Road. In the 1,000 years since, Middle Eastern merchants, students and travelers settled in Xi’an. Today, you can see and taste that global influence in the Muslim Quarter.

Be sure to visit the Great Mosque, the largest and one of the most important Islamic places of worship in China. Construction started in 742 AD, with additions built over the 1,200 years. What makes the mosque especially interesting is its combination of traditional Chinese architecture and Islamic art—cultural mashup at its finest!

It is the only mosque in the country that is open to visitors. However, non-Muslim visitors are not allowed to enter the main prayer hall.

Speaking of cultural mashups, a trip to Huimin or Muslim Street is a must. This busy street is lined with hundreds of restaurants and food vendors. It’s one of the only places on earth where you’ll find such a depth and breadth of Muslim-meets-Chinese culinary fusion.

A few highlights include hand pulled noodles, served atop a savory, vinegary sauce, often with lamb or beef. Half the fun is watching the noodles stretched by hand— mesmerizing! Be sure to try a burger. It’s nothing like it’s American counterpart. Instead, you’ll find braised lamb, generously spiced with cumin, stuffed in grilled pocket bread. Keep in mind the afternoon is almost always less chaotic than the evening.

My number one tip for finding the best vendors? Look for the lines! Sure, you may wait a bit, but the tradeoff is almost always worth it.

Take a break from city life at Yuan Jia village

About an hour and a half outside the city, you’ll find a quaint, quiet village that feels a world away. I like to think of Yuan Jia as Xi’an’s version of upstate New York. City dwellers head to here for fresh air, home cooked food, shopping, massages, ear cleaning (yes, really!) and a slower pace of life. If you have the opportunity, try to find an outdoor storytelling show. I’ve never seen anything like it—one of those totally foreign experiences that will stick with you forever.

Talk to your hotel about arranging a driver and guide. In fact, you could bundle a trip here with your Terra-cotta Warrior Museum visit for a fantastic day trip. I heartily recommend my friend Jerry’s tours at terracottawarriortours.com.

Kite flying has a history of more than 2,000 years in China. Once a means to pass military information during war, the art form slowly became a popular folk pastime.

Today, you’ll find kite enthusiasts at Da Ming Palace Park. These kites are nothing like the flimsy store bought variety of your childhood. Kite makers like Lee Xiao Hu craft intricate kites with bamboo, paper, sails and strings that are more sculpture than kite. Or so it would seem! He let me launch his 100-foot-long train kite, complete with a steam engine with moving parts. I sincerely doubted this puppy would fly, but it did! There’s just something about flying a kite that makes you feel like a kid all over again. 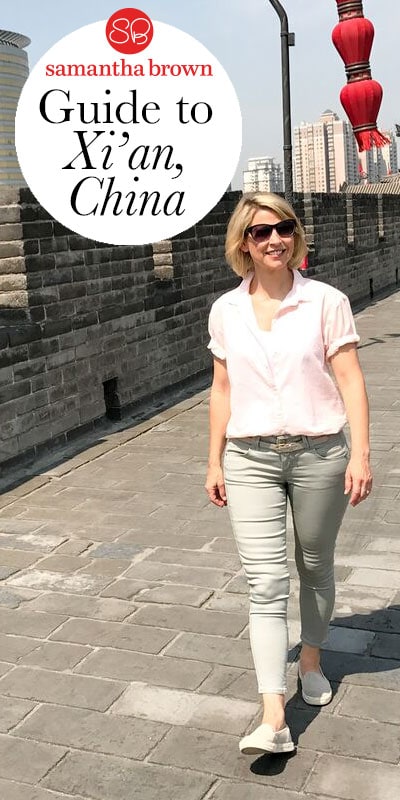 Is there wind? Great, you’ll almost guaranteed to find people flying kites in the park.